Well it’s May now and we should be fully into warm weather and sun, but it’s been bit grey these last few days where we live (southern England) and quite cold, so I’m still wearing warm woolies like this one, which I think is a really lovely bright colour. 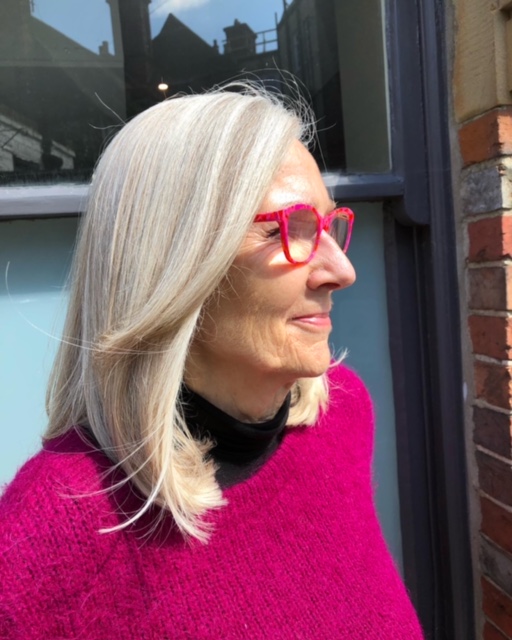 I haven’t done any end-of-the-month reviews lately so here’s a summary of some of the things that have happened and some thoughts on March and April, plus a short review of things watched and read.

As you know we moved! Which we really shouldn’t do at our age, and yes, I did say that, as moving involves a monumental physical effort, plus our system of conveyancing in England (not Scotland) is so stressful that of course, one’s sleep is disturbed and the blood pressure must go up. But now there are so many positives to say about our move including how much my steps have increased since we walk into town and back again, and there are numerous hills in Lewes, which compensate for the lack of stairs, now we live on the ground floor.

I breathe much cleaner air too, and first thing in the morning I open the window and take a deep breathe of the sweet air, helped I think by the greenery that surround our new abode.

We have changed our habits quite a lot and don’t watch as much television and absolutely don’t watch the news in the morning. That’s partly due to the move and partly due to how utterly infuriated I am to be governed by such morally corrupt government headed by someone who has broken the law. As for asking the Ukrainians wishing to come here for refuge to go through a complicated procedure to get a visa – why? Well I do know why, but shall not comment any further but you get my drift, this is a ghastly, dangerous government with too large a majority bringing some rather awful bills through Parliament that are so damaging. Not in my name, end of a rather small rant. Btw, while we don’t listen to the news I do read about the issues of the day, as I believe we should be aware, and face the challenges of this difficult time we are all living through. So I won’t be turning my back on the bad news, just not immersing myself in it.

Again on a more positive note, we have begun to do so much more in this lovely town. I’m always out and about. 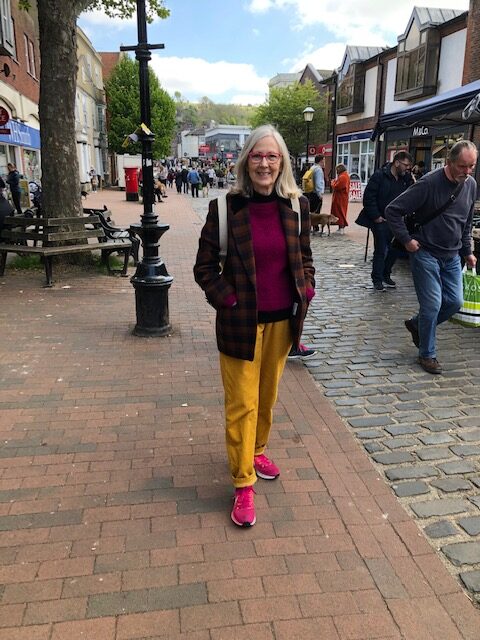 Note the canary yellow trousers that are matched with the fuchsia pink!  I believe in colour!  The only thing that is thrifted is the jacket which I have been wearing a great deal these past few days.

We have joined our local history group, which has a very good reputation for its research efforts into looking at Lewes’ past.  In a couple of weeks time the town will be abuzz with activity as the Battle of Lewes is re-enacted with little scenarios played out from the top of the town and on to the Castle and beyond. I shall take lots of pix!

And people, I have really got over my agoraphobia and have started going to the beauticians and the hairdressers again.  Yes, got my hair cut recently and quite pleased with it. 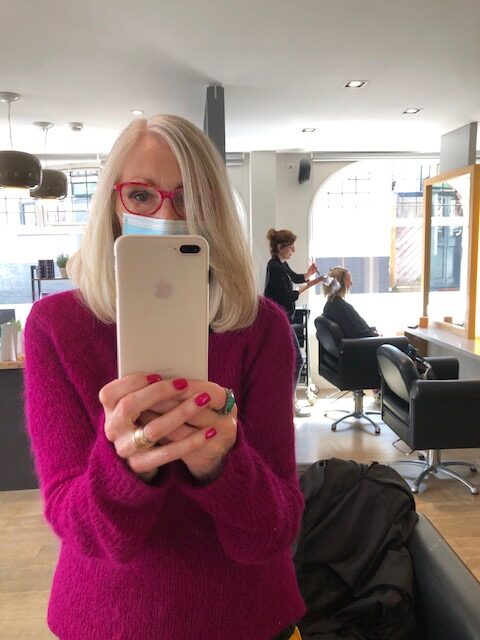 That’s btw my natural hair colouring. If any of you are wondering whether to go grey, actually you hardly ever go completely grey or white, and I’m loving the mix of colours that l’ve got that look as though I’ve had streaks added, but no, it’s the real colour which was covered up for 30 years. You’ll know when the time is right, but going grey is great.  Note the nail varnish, not worn any for the length of this pandemic!

Note also that I’m being careful as this pandemic is far from over. I still wear a mask in indoor situations including food shopping at supermarkets where sadly fewer and fewer people are wearing masks. But at the aforesaid hairdresser and beauticians, when they see me wearing a mask they immediately pop a mask on too, which I am so thankful for. We also go to the delightful independent cinema and have watched two films wearing a mask. The sound levels are wonderful –  oh wow, that sound, I had forgotten that deep base note that cannot be replicated in one’s own home.

We are still living out of suitcases as the bathroom is now being refurbished and after a delightful short stay in Dungeness (see last week’s post) we are staying at our daughter’s again, but hey, good and rather amazing news. We are going up to London twice this month and that will be the first time to London since November 2019! The first trip will be to be to the Victoria & Albert museum, perhaps my most favourite of all places to visit in London, and the second time for my annual (not lately because of Covid) mole check, I expect we shall do something else as well on that day. I shall take lots of pix.

Honestly I have been living here, there and everywhere and can’t recall all the films we’ve watched. A couple that come to mind, was The Northman, seen at the cinema, and not one for the sensitive as it’s a grossly over-the-top violent action-filled epic. It’s director is Robert Eggers and this is only his third film, the second being The Lighthouse, which we watched with my daughter and her family, and this is also a hugely over-the-top depiction of two men going mad in a lighthouse. Actually I found The Northman great fun to watch but The Lighthouse, well it was beautiful, the cinematography was lovely, but the actual film was quite barking!

In complete contrast, the other film we watched at the cinema was The Phantom of the Open starring Mark Rylance, which is based on a true story of a terrible amateur golfer attempting to take part in the British Open Golf Championship and sometimes achieving this. It was delightful, sweet and funny.

Our television watching has been impacted by the move and we haven’t kept up with the series we had been watching. But delighted to say that the last series of Better Call Saul (Netflix) has started, and I will be so sorry when it ends as the writing is superb and the story arc – well, we all know where it leads to as it is the prequel of Breaking Bad. One of the great series, in my view. Also been watching Bridgeton (Netflix) in fits and starts – it’s totally lovely to watch.

I’ve also read lots of books but rather lost track of which ones as tbh, we’ve been living out of suitcases since the beginning of March apart from approx approx 3 weeks in early to mid April. The cottage in Dungeness is full of books and everywhere you look there’s a bookcase. 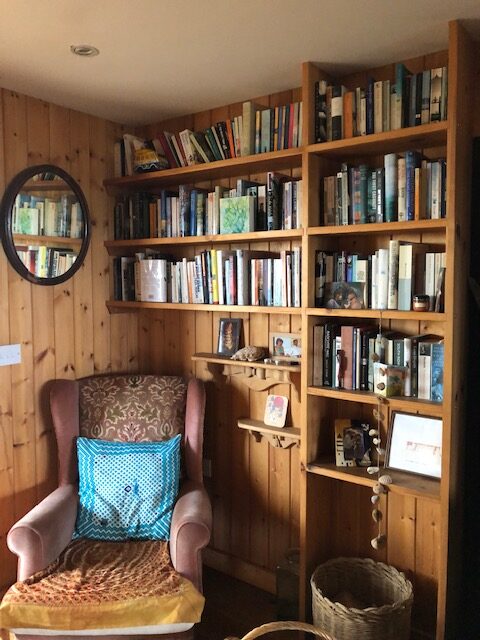 So I looked at many titles, ordered a couple from Amazon, including Suite Francais by Irene Nemirovsky and Star of the Sea by Joseph O’Connor and have just joined the local library where yesterday I got out Rose Tremaine’s Music and Silence which I am thoroughly enjoying.  I must say it’s lovely to be in a town where I can walk to everything including the local library – I expect to be buying fewer books now. What are you reading – any recommendations gladly received!

That’s all for now, with love Penny, the Frugalfashionshopper

33 thoughts on “Where’s the time gone? It’s May already!”