For those of you who are new to the blog we used to help run a film society in Newhaven. After 5 years of that we were ready to move on, which we did, stepping down in October 2017 – there are some great people running it now.  We hadn’t been back since then but two Saturdays ago we returned to watch the documentary The Music of Strangers which is the story of the cellist Yo-Yo Ma and his amazing work with his ensemble of fellow musicians.  As these musician come from many different countries and musical backgrounds over time they’ve developed a particular style which was very thrilling to hear.  There was a bag-pipe player from Spain who just rocked that instrument – you’d have to see it it believe it.

The film was also about the interconnectivity of people as they took this music to many different venues including refugee camps, and there was a heart-stopping moment when you saw the vastness of just one camp in Lebanon. This film was ultimately uplifting and you left thinking how it would be if just a few more people around the world worked on developing friendship, connectivity and interdependence rather than the stridency and posturing of nationalism, which I detest. Leaving my anger aside, you also left feeling humbled at the dedication of Yo-Yo Ma to his music and the wider world. However, if I’ve got one criticism it is that the cutting and editing let the story down somewhat, it was a bit all over the place leaving you feeling where is this going? The thing is running the film society led to us watching hundreds of films and, over time, we learnt to look at not only the plot and storyline, but how the films were made; the cinematography, the script and the cutting and editing all count, in my view, towards a cohesive and coherent tale. Sadly I think the editor was too clever by half with his rather choppy cuts.  But don’t let me put you off, do look at the film for a sight of good people working together to make the world a better place. More power to Yo-Yo Ma – and respect.

I wrote all of this at the end of last week, and unbeknown to me Tricia Cusden’s LookFabulousForever blog post this Sunday is about films. Talk about synchronicity! Actually it’s about the kind of films targeted at us, the grey pound, the older filmgoer, as in, me.  Look, I’ll say it here and now, I really do not like these films. There’s a couple out now; The Leisure Seeker for one starring Helen Mirren and Donald Sutherland. And as for the Marigold Hotel type film no, no, and again, no.  Yes, in the interests of the film society, I have seen both Marigold films,  And in my view, they’re too safe, too predictable and too tame for me and, and, too stereotypically scripted for and targeted to a certain demographic. For me, watching that kind of film is like eating a very sweet sweet – sickly and unsatisfying. Actually, our film society’s ethos was to show the slightly unusual film that you couldn’t see in the mainstream cinema outlets – and very successful we were with that too. In fact, now I don’t have the responsibility of the film society to watch and sift, I’d have to be dragged kicking and screaming into any film that stars the usual suspects, and especially (I’m sorry to say and I know that this’ll upset some) Judi Dench, well not Philomena, that had some grit. And that’s my point, I do not like sentimental, ‘nice’ films that are targeted at the older audience.  Because why? Because in my head I’m 25 that’s why!

So, what films do I like?  I like a very, very broad range of films – you name the genre I like it.  I don’t like rubbish (ha ha, see below) but I will try anything.  I like a good script and subject matter that not only uplifts but teaches you something new.  Similar to my reading material I like to unpick and think about the film afterwards.  But I also like to be entertained and, at the moment, my totally fave films, which I am now going to rave about are the Marvel series of films, which are actually about a whole cinematic universe.  These include the Thor films (Thor: Ragnarok is the best), Captain America, the Guardians of the Galaxy series (great fun) and the Avenger series, of which the latest Avengers: Infinity War (the 3rd of a 4-part series) I can’t wait to see.

Oh, you might say. What terrible taste.  And you know what, I’d say, I respect your opinion and I totally accept that people have different views on what films they like, but, have you seen any Marvel films?

OK, I’ve not been a fan from the start as I’ve only recently realised how good they are, but now I’m smitten. (And the start would be 2008 with Iron Man, and gosh that Tony Stark is irritating). But not so long ago I watched an interview with Tom Hiddleston on his role as Loki, and I realised that yes, there was a whole world out there which I had to catch up on. I had seen some of the films, but not all (there are 19).  And why?  Because, let’s take the Avenger series, the script for a start is excellent.  For example, in some scenes of Avengers Assemble (2012) it is positively Shakespearean. And the acting.  Oh yes, even that Chris Hemsworth (a big guy – gulp) can act and he has Tom Hiddleston thesping away by his side as Loki (fascinating and quite sexy) along with Anthony Hopkins (say no more) as Odin.  Actually, I feel there is some substance to it with its Nordic and Greek mythology.  And then there is the sheer entertainment and fun in these films. We need a laugh these days and here’s just one example. In Thor: The Dark World (2013) much of the action at the end of the film is taking place in Greenwich. Thor finds himself catapulted from the Dark World into the London underground (would take too long to explain how and why).  Standing on the platform in his full Thor gear he asks how he can get to Greenwich and is told ‘it’s 3 stops further on, mate’, so promptly gets onto the tube train full of commuters. It’s hilarious. It probably hasn’t convinced you, but I’ll just leave you with the idea to never say never, because these films have a lot going for them, including laughs. I really enjoy them!

And just note, you film-makers and scriptwriters out there.  Maybe the baby-boomers (who are now in their 70s) really aren’t turned on by the films you think we might like. Let’s not stereotype older people, OK!

Btw, I’d like to apologise and also thank those who commented last week.  Our internet provider had some problems and was more off than on over two days.  The blog was fine but I couldn’t do the replies to you for several days.  But there you were responding to each other – now that’s connectivity and it was quite lovely to see it happening.  Big thank you to you all for commenting.

Anyway, getting back to clothes (!) I always used our monthly film night as an excuse to dress up, and while I don’t miss the responsibility of the film society I do miss the opportunity to wear a frilly and frothy skirt!

Although I still have a few of those skirts (after my big clear-out, that is) I chose to wear a straight skirt bought, of course, from a charity shop for £5. It’s as good as new. 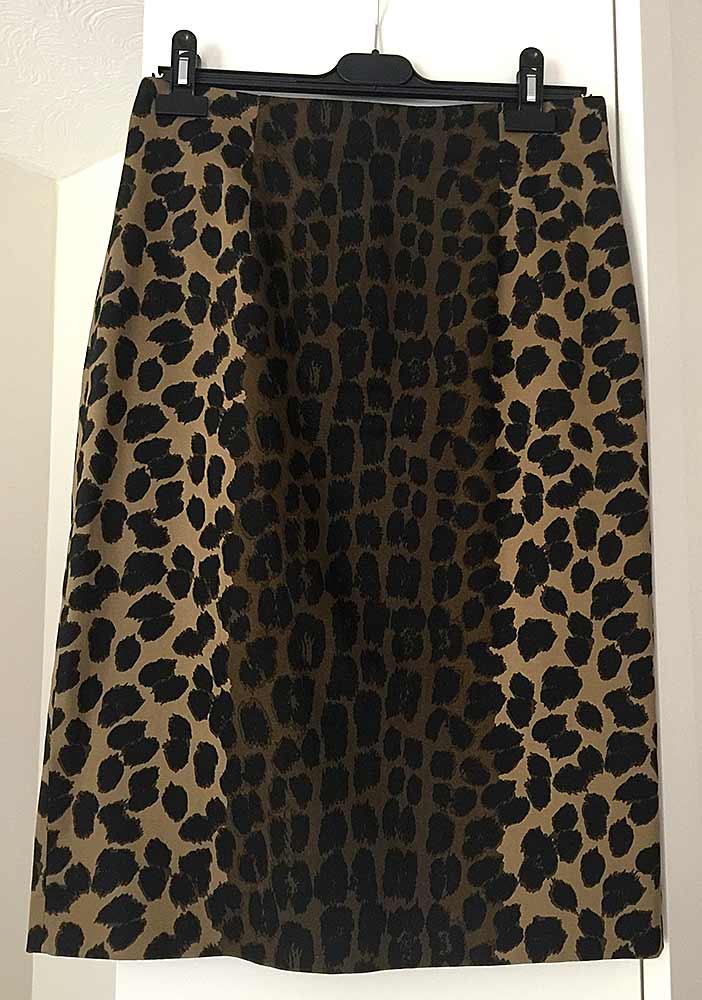 The label is Hobbs, so the skirt would have cost a lot of money if bought new. 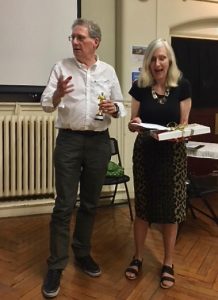 And here is another view of the skirt and Mr Frugalfashionshopper.

We had a surprise! There was a little ceremony which began with the film society treasurer saying, ‘tonight is Oscar night’ which of course it wasn’t, so I was thinking, what is she on about!  But dear friends, we were given an Oscar (look closer, Mr Frugalfashionshopper has it in his hand) and a box of the most delicious chocs plus a life membership allowing us free seats to all future films – wow!   It was very unexpected. So, a big thank YOU Hillcrest Film Society – we were very happy and thrilled and the chocolates are amazing!

And P.S. What age are you in your head?