I shall be changing my details in my bio again, and this time it’s my age. Yes, last week I turned 76 – how did that happen? I had a wonderful day as, because of the Platinum Jubilee my birthday on June 2nd was a Bank holiday, so the kids were available, Oscar was better and we all had a lovely get-together at my daughter’s, which for me was the best kind of birthday.

But before I show you some photos of that day, I just wonder what you think of ageing?  As in, really and truly, what do you think when you think of older age?  I read a lot including anything about ageing, and I see there’s always something being written about this subject, usually by people who are much younger than me.  It’s often very positive, urging you to do this and that. And from their vantage point of being 50 or 60 something I think they see much of what they urge you to do as preventative and I wonder, truly, if they see themselves as old, really old, or frail? Because every now and then after reading these very positive exhortations I think You. Have. No. Idea.

For me, last year’s birthday was not the best as reaching 75 seemed a huge hurdle to get over. For me reaching 70 was no problem. My head was still in my 60s and I behaved no differently to how I was in my 60s, which again was no different to how I was in my 40s. At the age of 70 I was ageing slowly and I had nothing much wrong with me apart from my sightly dodgy guts and that was something I’d had for decades, so no change there. But turning 75 I thought, wow, that’s half way to 80 and I didn’t want that, and huge apologies to anyone reading this who is over 80 as I know that was so ageist. But that’s what I thought, I realised I was no longer in my early 70s, which  meant being, well, old and not middle-aged any more. I mean thinking I was middle-aged was pushing it a bit as I think we might be seen as the young-old. But I have got over that hurdle. I now think ageing into one’s 80s is all about defiance, a lot of maintenance and, to a certain extent, acceptance. Plus living the life to its fullest, bad grammar?, but you get what I’m saying?

If you look around we can see that we all age at different rates, and there is nothing worse than seeing ages lumped together, with the over 65s seen as the last age group in surveys. I always feel outraged when I see that, as the differences between the 65-yr-olds and the 85-yr-olds must be huge. I can see this, and I expect you can too, as I look at the differences between some of my friends, one of whom had an arthritic hip in her 50s and a replacement in her 60s, while my hip did not mean a thing to me until April 2021 when I was 74, that’s when I felt it. I have another friend same age as me who has had two hip replacements in her early 70s and now needs a knee replacing. Other slightly younger friends who have just reached 70, seem to be similar to me at that age and have nothing much wrong with them at all.

But having reached the ripe old age of 76 I can definitely say that several things have begun to stack up and go out of kilter, and the battle to just maintain the status quo is, I have to say, quite hard work.

Interestingly while there is no end of advice on how to age well, I’ve read some recent research which showed why people suddenly become more frail in their 70s (which you can read about in more detail here) but in short it is to do with a dramatic reduction in stem cells. These apparently go from 20,000 to 200000 different types of stem cells in adults under 65 to some over 65s ending up with only 10-20 distinct stem cells producing white and red blood cells, with quite obviously huge consequences for health. This, they argue, goes some way to explain the sudden fragility of many over 70s. My reaction was well, thanks a bunch scientists, that’s not what I want to hear. That’s rather like my cardiac consultant, who says to me, when I ask, ‘why me, when I’m not overweight, I eat the right diet, I don’t smoke, I take exercise’, and he replies, ‘well, the thing is, you may look ten years younger than you are, but your circulatory system is ageing’, and he actually said, to me, ‘it’s old’. Well thanks for that…but no thanks… is what I think when he says that! However, back to those blood scientists, they do say that now they understand the process they can work on halting that process. Well, all I can say is get on with it!

Recently there seemed to be a lot in the media about ageing well, which while I won’t go through, mainly because it does seem to boil down to three things which are:

Eat plants – yes not exactly ditch the meat, but eat much less of that. And, of course, eating less meat is good for the planet, of course. But do eat that huge variety of plants, 30 different plants each week. Can you do it?  I think I eat nearly that, let’s see:

Move – it doesn’t matter how you move but move you must. We looked after Oscar for the entire afternoon a couple of weeks back. He’s very active and I was kneeling down, getting up and then down again and walking around with him for 4 hours. Did I feel any aches or pains or stiffness afterwards? No, nothing. That afternoon was like a full body workout and I felt amazing even the day after. A couple of days later I sat down the whole morning to do some writing, and boy was I in pain thereafter. Sitting kills me, so I always aim get up every 20 minutes when I’m writing but I forget and always feel the consequences.  Then there is the Pilates class and my once a week 1-2-1. I could not do without those.  But it doesn’t matter what you do – just move!

Be positive – as much as this world allows you, so cut that news programme out, as there’s not much to be positive in the news these days. But we can see the best in people, friends and loved ones, we can email, and text and meet because yes, socialise, join something, and get out. Ha Ha, as if we could for two years but while that’s not over, we can do more, if we’re careful.

And I always feel positive when I dress up!  On my birthday I felt like getting out my goth gear! I mean what’s the weather like where you are? It’s June and we’re still having quite cool and wet weather. Mind you the sun is out today and it feels a little warmer. Good, as this summer I have worn one dress once, and that was when we went up to London mid-May. So on June 2nd I wore this. 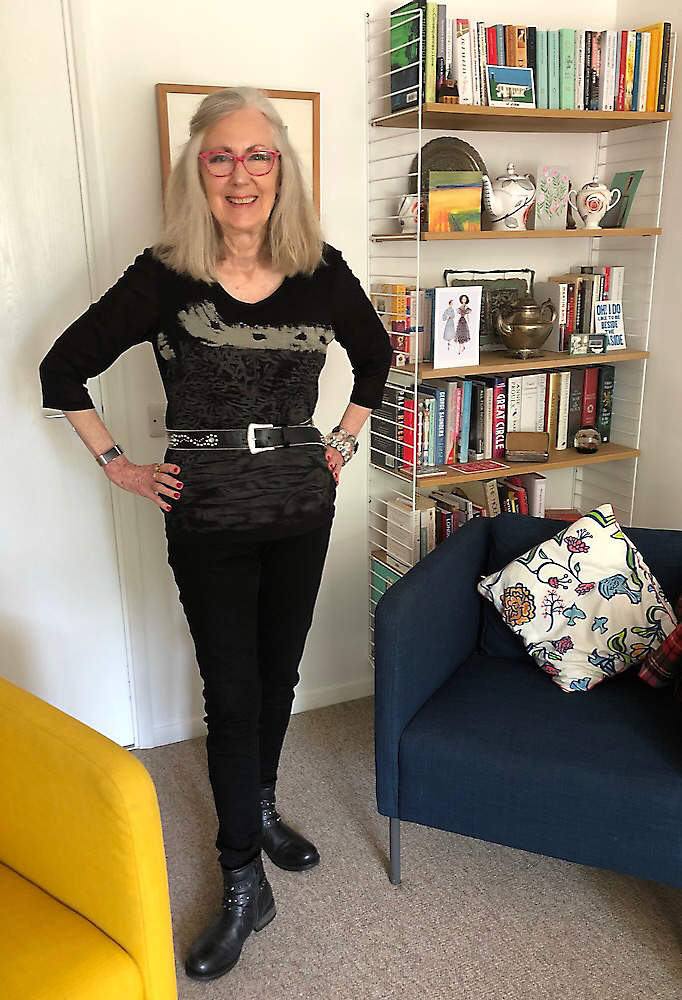 The top and belt are charity shop items, the rest, skinny jeans from Mango, and my studded boots.

I bought myself a present. 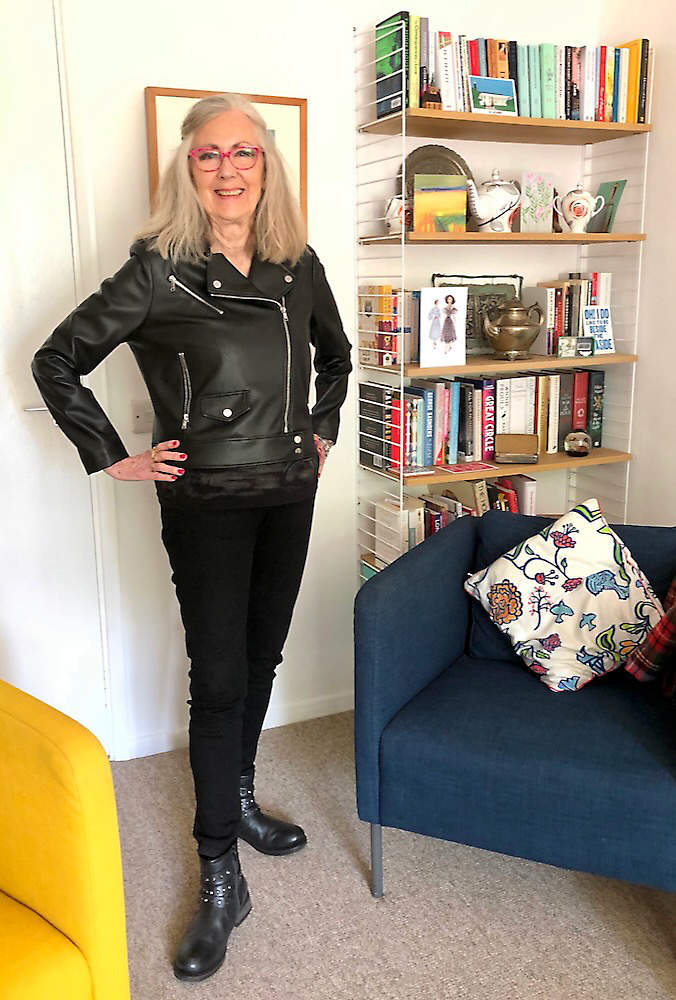 An M&S biker jacket!  My old one finally hit the dust and was sent off back to a charity shop where I got it ten years ago! And here’s a close-up of a 76-yr-old! 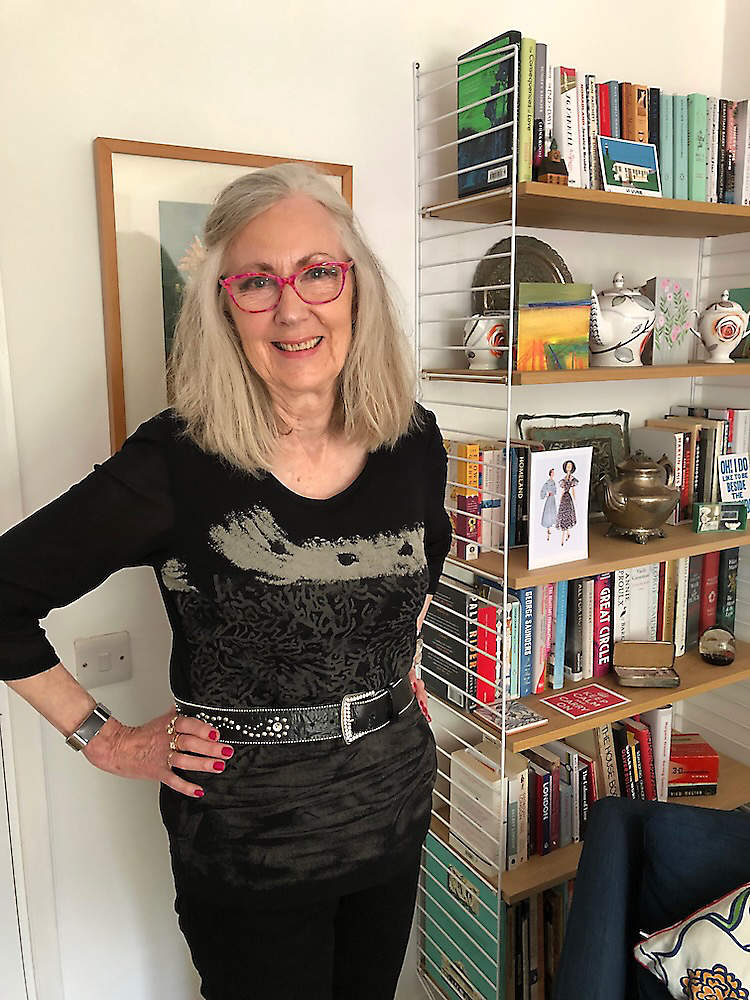 See that card on the shelf? Mr F made that – he’s clever like that! – it’s from one of those dress patterns. Here it is. I used to make all my clothes, but I never made anything as nice as that. Here’s wishing for the weather to wear floaty dresses!

We had pizzas and cake at my daughter’s. Here’s the cake made by my daughter-in-law Marion. It was absolutely delicious. 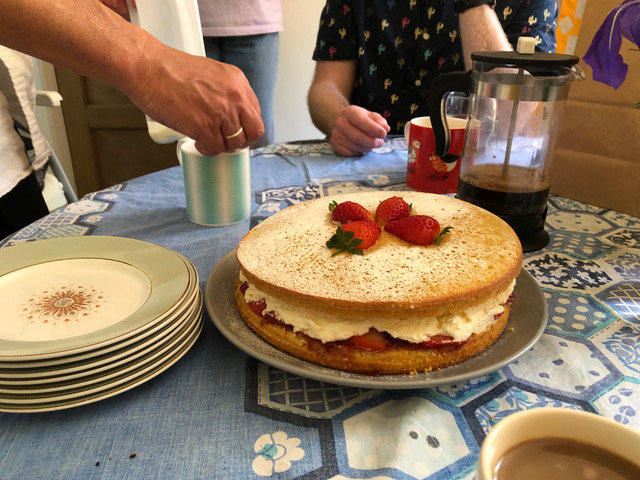 Actually the cake and presents came after a walk and as we were setting off, with me lamenting that I’d forgotten to bring a sun hat, my darling daughter, Susie, gave me her present, a hat! How I love hats! 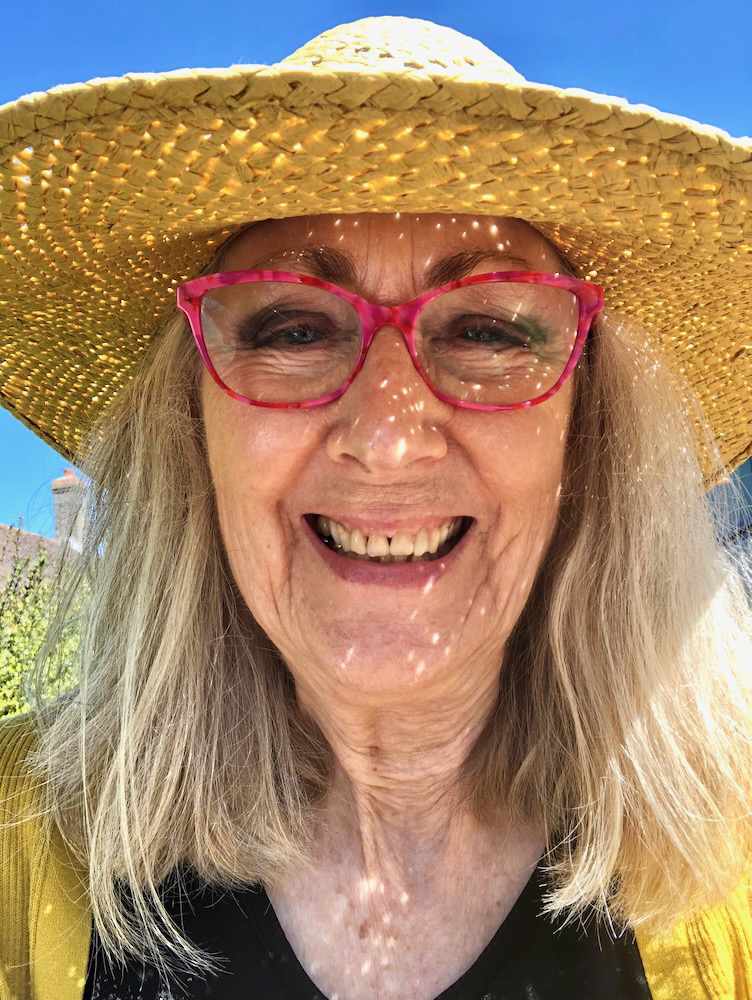 It was lovely to wear on that day, which was quite sunny. This was taken in the wood near the children’s park. 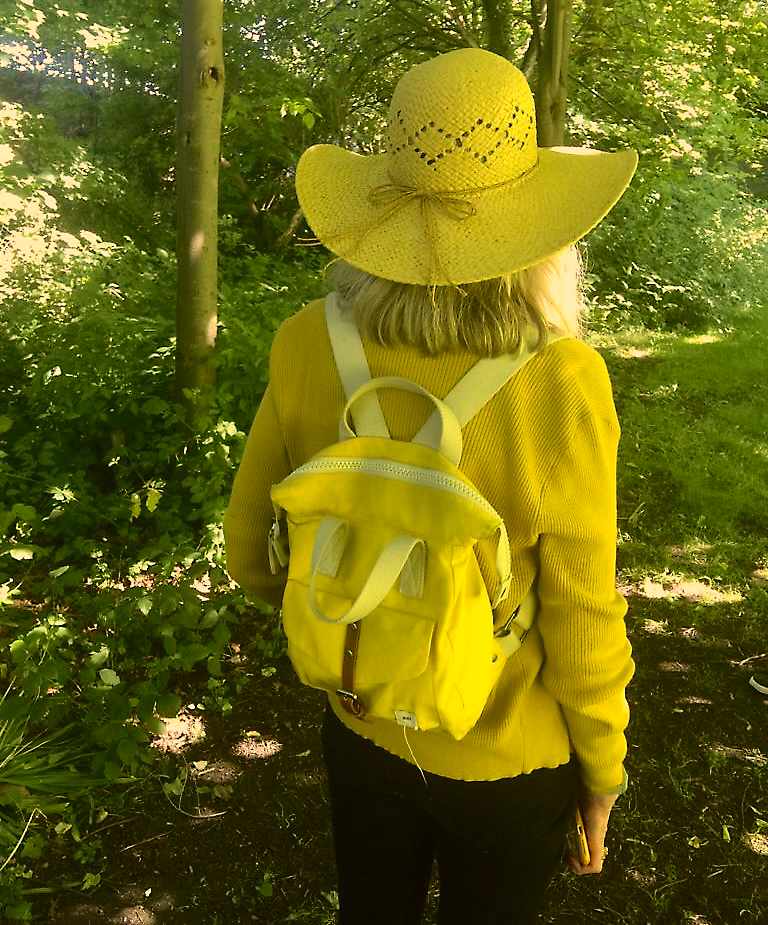 I do love the colour yellow!

And here finally, is a happy family at play! 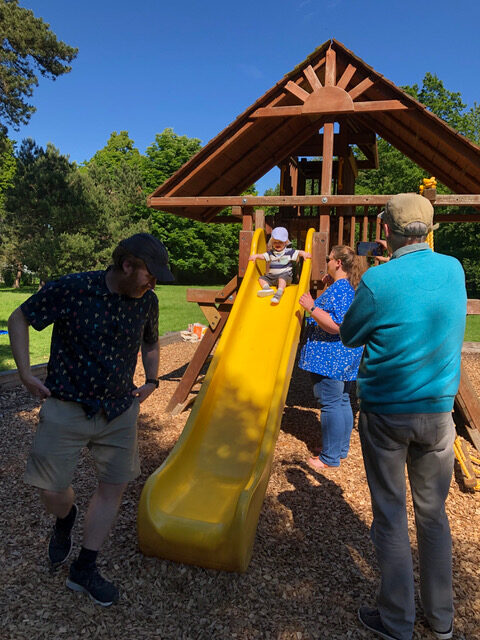 That’s all for now, but do tell me what you think of ageing – and I mean, what you really think but don’t always say.

50 thoughts on “What do we think about when we think of ageing?”