I promised I wouldn’t complain about the hot weather after our awful grey and damp winter.  And I’m not.  But Tuesday was the hottest day of the year topping 32C (89F) and I felt not far from heat stroke when I walked for a mile in the sun to fetch my grandson and then a mile back.  (I’ve been doing that every Tuesday for about 5 years now).

I guess we’re just not used to the heat here in the UK.  But the thing is it’s awfully humid heat so even the friends who holiday in Spain or Turkey (and would never dream of holidaying in the frozen north) thought Tuesday too hot. And honestly, it was like walking in hot soup.

To celebrate the heat I wore this cool, quite retro, cotton charity shop tie-dye dress bought, I think, last year.

I wore it with my new linen tie-dye hat bought in Norway.

But the lovely hat didn’t have a wide enough brim so I’ve burnt a bit on the back of my neck and shoulders.

I’m awfully pale skinned and even with suntan cream at factor 50 the slightest bit of sun on my skin and I burn.  Mind you, a friend has just advised me to change my sun tan cream – if I don’t burn wearing that brand I’ll let you know about it.

Yes, summer is lovely but I do find exposing my legs a bit of a trial.  Truly, they’re so white they’re almost blue.  But I’m going to experiment with, first of all, shop-bought fake sun tans, and then I’ll try a salon fake tan.  And I’ll keep you briefed on how this turns out.  Actually, the first shop bought tanning-cream I tried smelt so horrific I only put it on twice, but nevertheless, the legs aren’t as marble white as before.  Tonight I’ll be trying another fake tanning product – will let you know how it goes.

Here’s another lovely dress, which I spotted in a charity shop window.

I couldn’t pass by.  I went in and bought it!  And not a bad price at £6.99 and it’s a Jasper Conran dress so just move the decimal point to the right for it’s real value.  Why wouldn’t you go charity shop shopping?  It makes such sense.

Look at the asymmetric hemline, a feature I love. 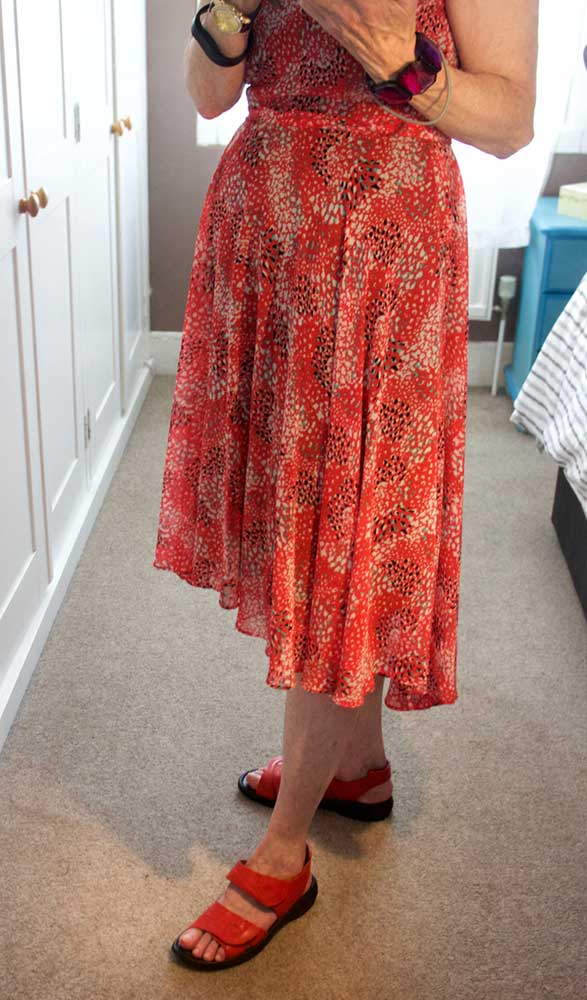 I can see I’m lacking some nail varnish – a very bright pillar-box red is needed, don’t you think!

P.S. Sharing with Catherine Summers and her #iwillwearwhatilike session and Judith Boyd’s monthly hat attack session to show her the July tie-dye hat with a co-ordinating dress!