I don’t know about you but I love living near a vibrant city like London.  In my head, I think I go up to it quite a lot. In actuality we hadn’t visited the capital since the summer. So on a whim, off we went, and using an offer at our favourite hotel (in Bermondsey) we also stayed overnight – woo hoo.

We had a great time, and did what we love best, which is visit exhibitions, starting with the V&A.  And as I was with my other half, no it wasn’t the Balenciaga, but the one on Plywood.  Yes, that’s right, plywood!  This isn’t on any more as that was its last weekend, but so interesting.  The next day we mooched around Bermondsey, and then walked through Borough Market where there’s a great food market on Saturday, and onwards to the Tate Modern – I did nearly 13,000 steps that day!

The Tate Modern has expanded enormously since we last went, which meant a lot of wandering around finding new exhibits and areas to explore.  After a cup of tea and a really outstanding slice of cake we left to go home via the new Blackfriars station feeling both exhilarated and exhausted! 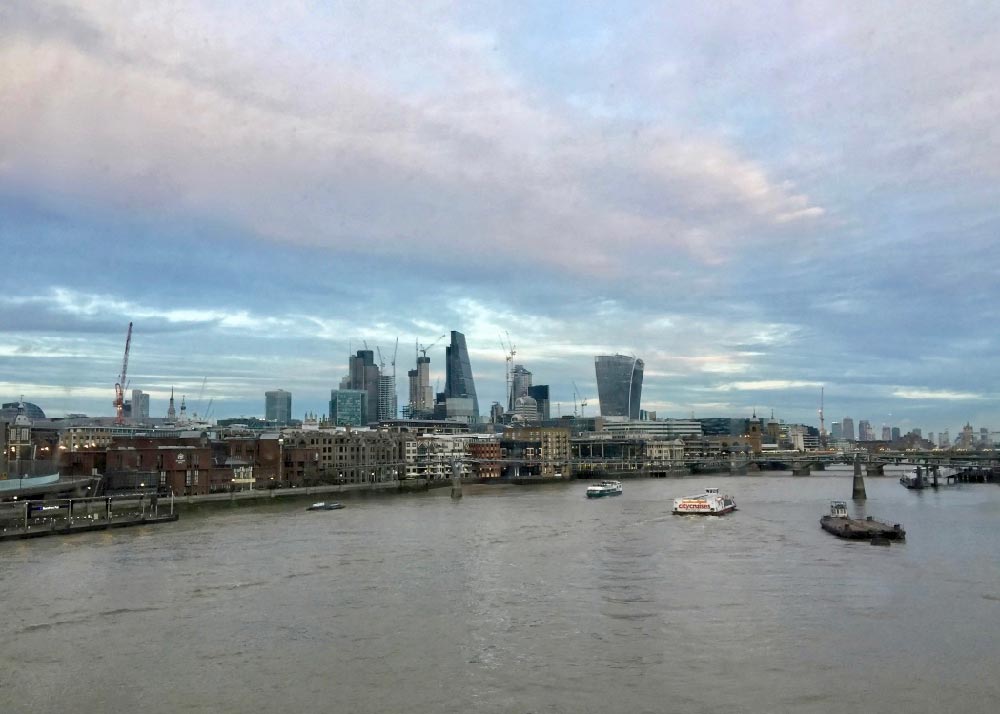 Apart from the above (which is the view from the station) I’m a hopeless street photographer, so no pics of markets or people or London, but here are two observations. One is that London is just the greatest (I know there are fab cities elsewhere) but it’s just so alive!  Has anyone seen the documentary London: The Modern Babylon?  Do search it out if you can – it’s written and directed by Julian Temple. In this doc you see London as the living entity it is, with all its people, cultures and buildings. And buildings, oh my. Always, always there is building going on leaving London with an ever changing skyline – so exciting! Here’s the thing, I felt so stimulated by my surroundings I completely forgot the past week’s experience of doing something to my back, which left me feeling and looking fragile and ancient. The irony is that the muscle strain (that’s all it was) was caused by me shooting out of bed because I thought I was going to be late for an early morning exercise class – which I didn’t get to!  My muscles over-reacted and I got stuck in my slanted position for most of the day (usually I uncurl in around an hour).  Over the next couple of days this gradually went away, but the whole experience left me feeling a bit chastened.  Being up in London, though, made up for that, and some.  Lessons learnt – don’t rush out of bed, take your time! And do go up to London more often.

And second, I saw a lot of women wearing great clothes.  And the ones that stood out were the women who seemed to have an overall coherence to their look.  One wore a long, almost down to the ground, well-cut coat in a beautiful stand-out purple, and with this went a matching purple hat.  Now this woman wasn’t a striking beauty, on the contrary, she was quite ordinary, but her co-ordinated look was something that I really admired.

I dare say the fashion on the streets and in the shops was way over my budget.  But the thing is, you look, then you search out for similar items in the charity shops.  So, my view, is look, always look. Look at everything. Then go and adapt what you’ve seen to your shape, taste and budget.

Here are a few pics that Mr Frugalfashionshopper took of me. Here I am with my hat bought in Toulouse a year ago and the brocante jacket bought last month for 5 Euros. The train was crowded. I used to love train travel but nowadays it can be a bit of a cattle truck experience. At least we got a seat. 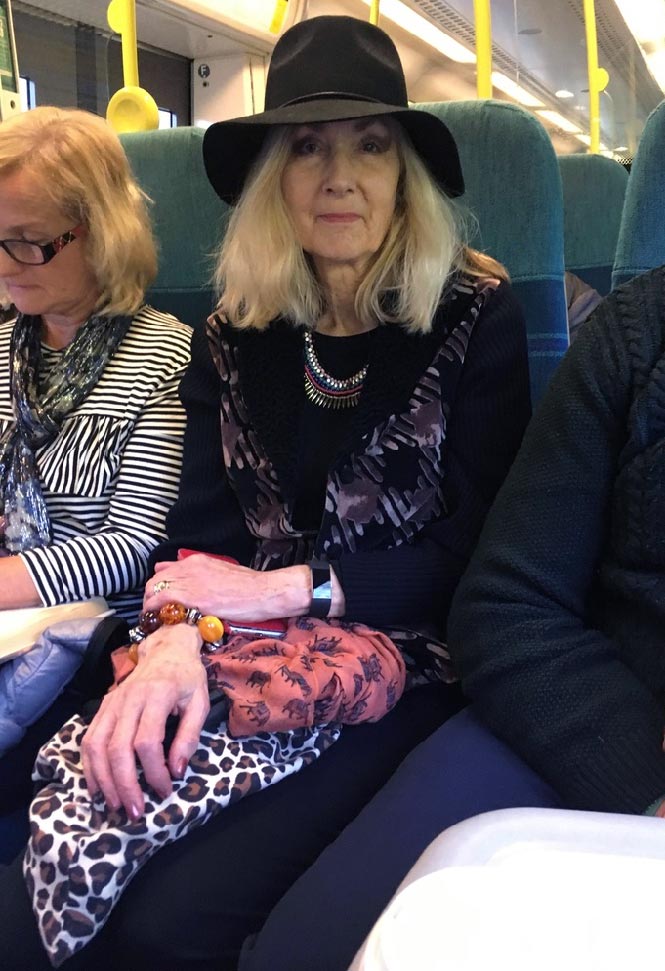 That’s a shadow or something above my left eye, btw, and not my makeup!  Or maybe it is, hmm!

This is outside the front of the V&A and note the charity shop yellow coat, which has not been put in a cupboard for best, but is out and about in London! 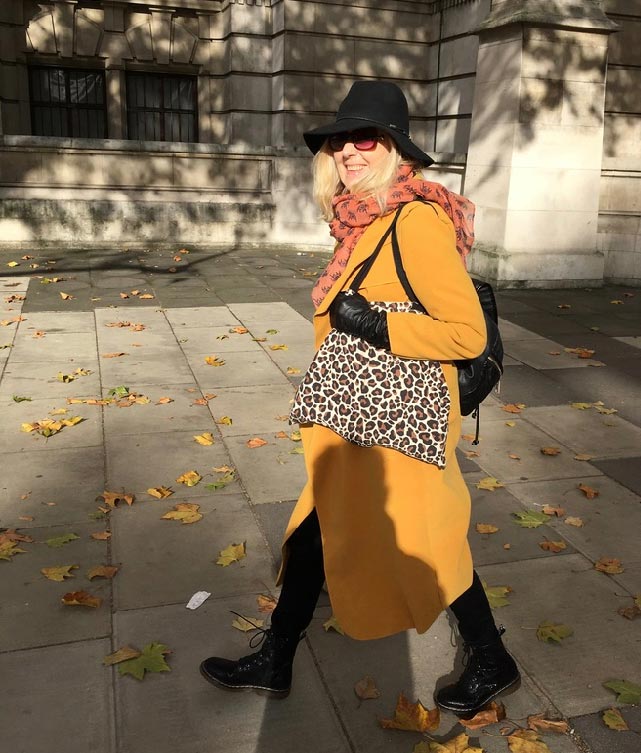 The V&A has a new, very swish entrance at the back. The scarf and bag were bought new in charity shops. 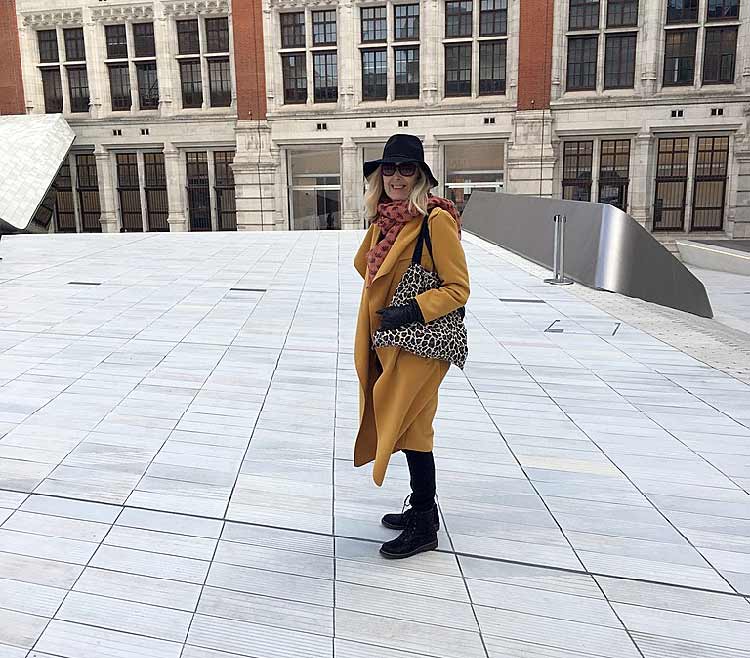 And here I am the following day. The necklace was bought at the V&A on one of my frequent visits and the top is new from Hennes at £8.99. Note the glasses. 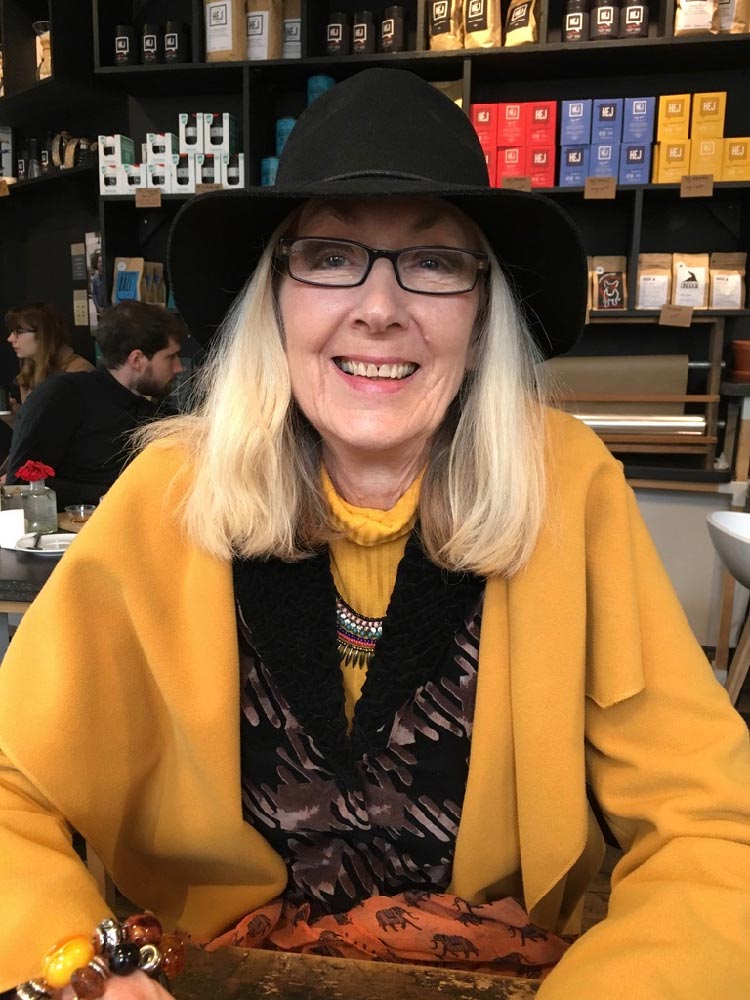 That morning I lost one of my contact lenses down the basin plughole – blast!  I don’t like myself in glasses, but, it’s not the end of the world, we still had a great day.  This was taken in a great little coffee shop called Hej, where we were waiting for the rain to stop, which it did, but not until we had two coffees!

That’s all for now, but what’s your favourite city?  With love

P.S. And sharing with the usual great crowd of bloggers – see side bar or below for icons to click on.