We continue to unpack and things look a little better. It’s getting there as Mr F often likes to say. 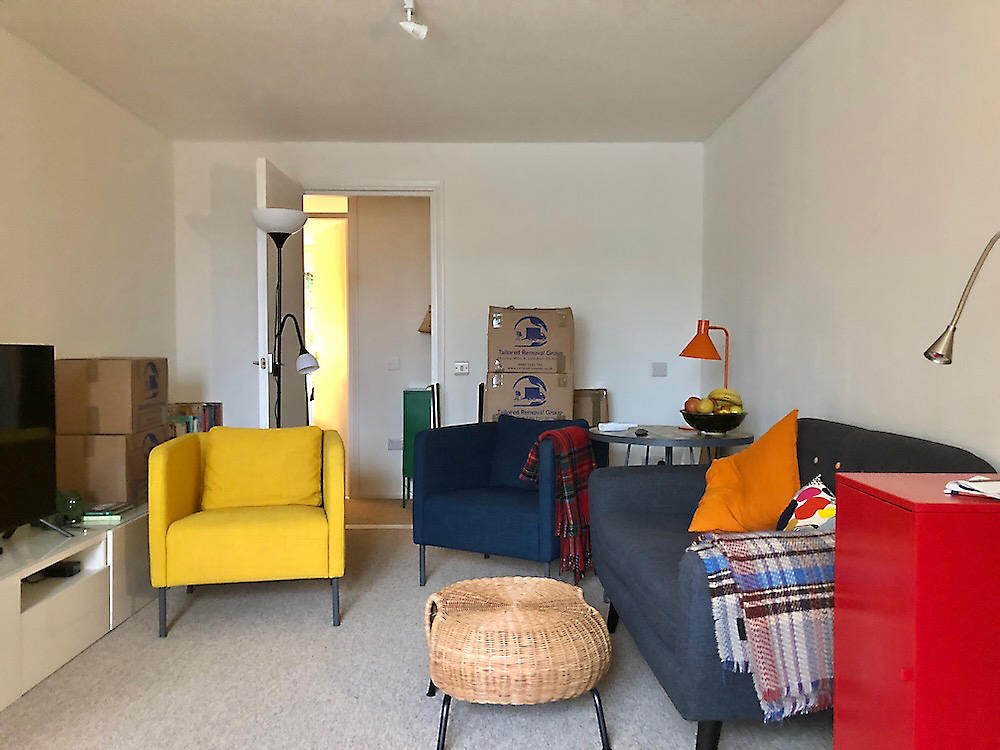 And that’s the view from our bedroom window, which is quite a contrast to the urban view we had in the last place of a block of flats that were lit up throughout the night. 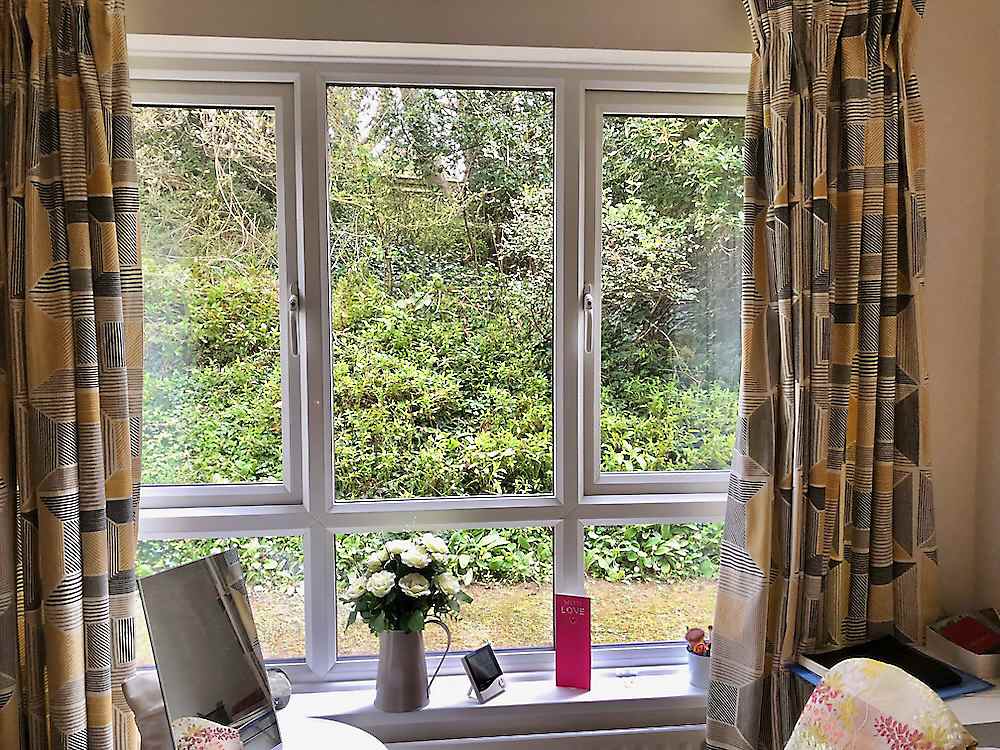 This view is leafy and green and quiet and dark – I sleep so much better now.

You will get more pix when a set of shelves goes up in the sitting room and my ‘art’ is up on the walls. In the meantime I’m still nursing a sore back as there are still things to organise and unpack and it’s all the bending, ouch! But it’s only temporary and we feel so happy and at home here.

Some observations. Our kitchen is larger than the last place and we have an extra side wall of units, and at the moment I’m not used to the extra space and I keep turning to the wrong wall!

But hey, and huge joy, that means there’s room for a  dishwasher and a washing machine. Dishwasher is great, but the washing machine, oh blooming heck! I bought a model that I’d used 4 years ago in the last flat but one. I was very satisfied with it so why wouldn’t I want the same. But it’s not the same, as one of the markers on the machine says ‘downloadable programmes’. As you probably realise both me and Mr F are quite tech savvy, especially Mr F, but can we download these programmes onto the app? No we can’t! So I ring the manufacturer who will get an engineer to contact us in the next 24 hours. Have they done that, no they haven’t! Honestly I am not against progress and no way am I a Luddite, but I think all washing machine programmes should jolly well be there to be seen, not hidden somewhere on a very unintuitive app!!  Actually have any of you encountered this? I would never have bought the blooming machine if I’d know the bother it’s caused trying to download the programmes. End of rant! And yes, what a first world problem!

On a more positive note, this new flat is lovely and warm and we don’t seem to need the heating on all that much, even through this cold frosty spell we’re having in the UK, which is great, all things considering. We believe this is due to the insulation that this flat has, which was very much lacking in our last place. We had great views on our 3rd floor, but there was practically no insulation above us and minimal insulation in the walls so our heating was always on full blast and on any slightly cold day the flat was freezing. I see Johnson’s new energy policy fails to take up the idea that in the UK all our mainly old and drafty housing stock needs insulating. No, it’s nuclear power stations (not particularly good) and wind farms (yay!), but not a word about insulation. Hmmm!

For those of you outside the UK we have a climate change activist group called Insulate Britain who indulge in some pretty annoying tactics, but really from just my experience alone this group really does have a point, that the UK housing stock is in dire need of insulation and, wow, the money that would save hard up householders. I’ll stop there as all political comments should really be in My Other Blog!  And there’s nothing new there – yet!

Another very positive thing coming out of this move is that my step count has practically doubled as there are so many great walks around this lovely little town, and we’re always out and about – yay!  The town itself is very old and has some lovely quirky aspects including the ‘twittens’, which are narrow little lanes behind the main High Street. Here are a couple of pix to show you what I mean. 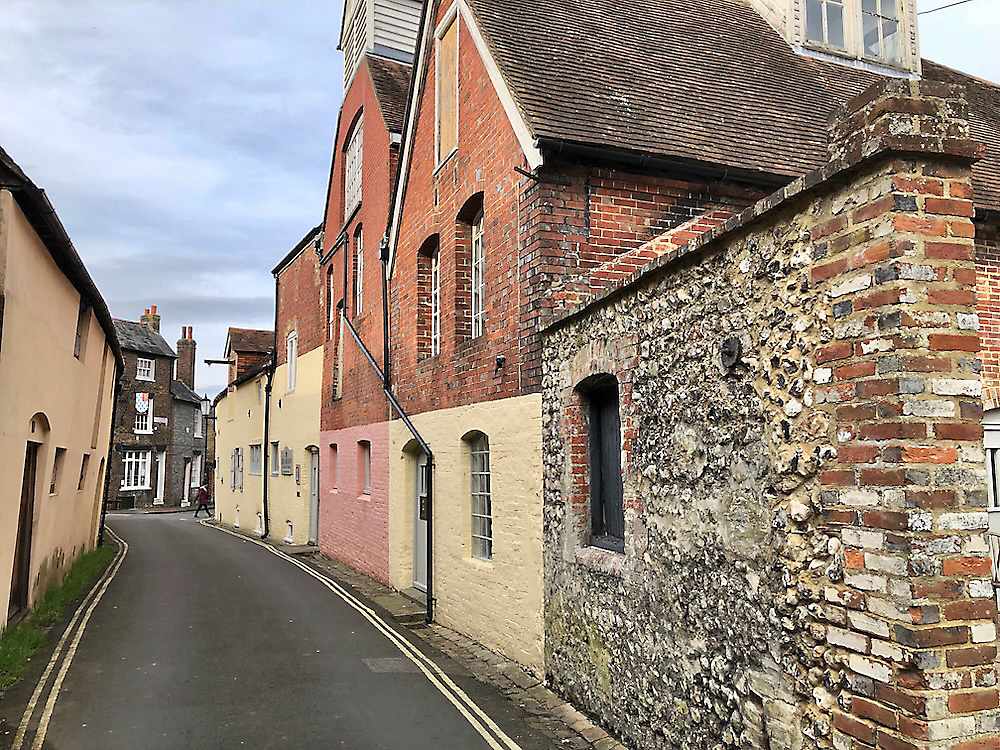 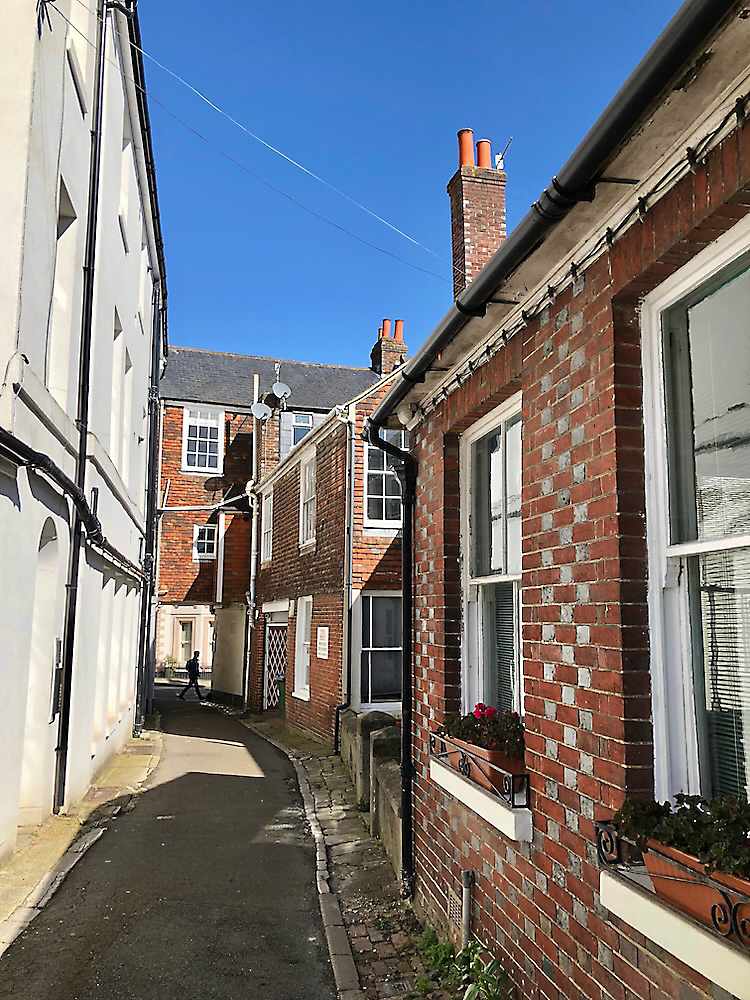 Fashionwise, March and the first weeks of April have been a crazy couple of months. I packed in early March on a cold day and then not one week later, when all my clothes were in storage, I had no summer clothes to wear when it became very warm. That was when I bought 3 charity shop summer dresses, which are now hanging up in the wardrobe and not one bit suitable for this changeable, mixed and mostly cold weather we’re getting. We are having some warm moments along with blue skies and if you can manage to sit or walk in the sun – fab.  But as soon as the sun goes in or you’re in the shadows – brrr! So it’s near enough back to winter clothing.

Of course, I’ve been hunting through the Lewes charity shops and was so pleased to have found a waterproof mac with a lining, which I pounced on as these are not cheap when bought new. The charity shop price was £15.50 and the coat is hardly worn at all. 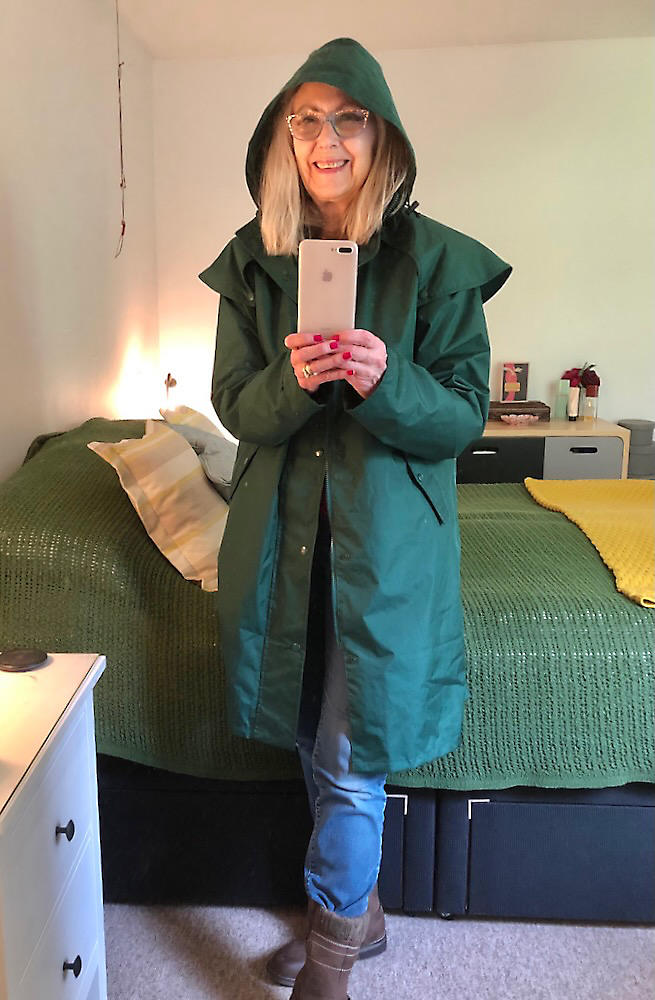 This will be worn now during the many short showers that are forecast this week.

In contrast I do have a long elegant mac bought new from Thought in a sale recently, but it is unlined so won’t be wearing it until it gets that little bit warmer. 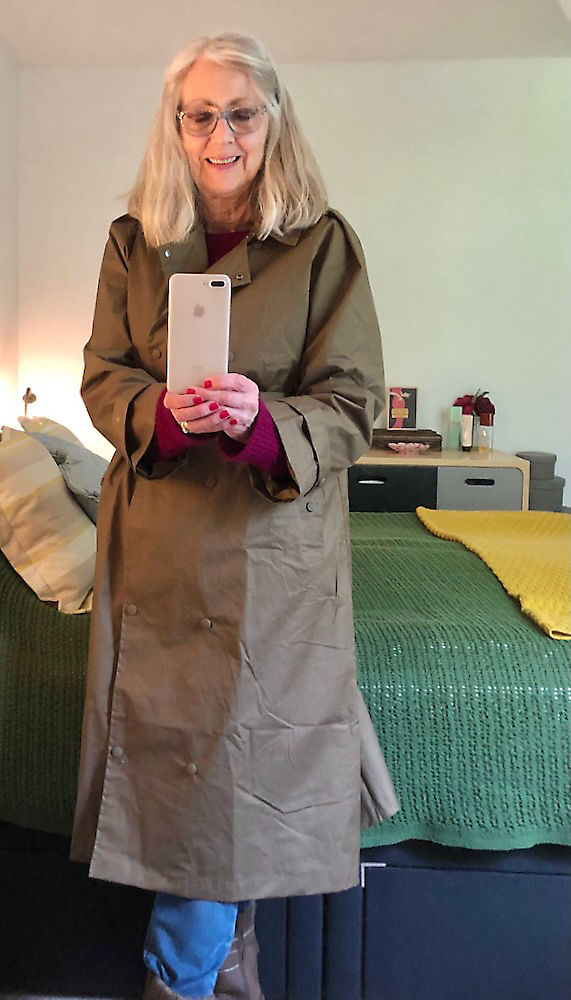 The gel nail varnish has managed to protect my nails through all the unwrapping of pots and pans and ornaments.  I see I managed to get a shade which matches this gifted woolly originally from Toast. The jeans are a favourite charity shop buy from two years ago.

That’s all for now, but thank you for staying with me through that long gap with no posts, and apologies if I’m boring you with move news, but gosh you do become a bit obsessed. We’re nearly back to normal though!

37 thoughts on “Two new raincoats and more news of the move!”