It’s October – wow! With the Autumn season well and truly established the weather has turned in the UK and it’s wet and windy once again, consequently our winter duvet is back on our bed and yesterday I even wore a vest. And, oh bother, with the change in the season, would you believe it, my blepharitis has returned!  Furthermore, the end of the year approaches and my son has already contacted me about arrangements for Christmas!

But for us September was a blast – we saw more friends for tea and cake and went away to Dungeness, which was a great success and we aim to replicate the joy of sharing a holiday with our adult children next year and the next for as long as we can.

However, for the nation, September has been quite an eventful month, and remember this is my take on September so skip the next few paragraphs and go straight to the films and books if you don’t want to read about the woes of the UK!

OK, the UK has had a shedload of shortages including building supplies, turkeys for Christmas and carbon dioxide of all things, and critically for consumers, some foods in the supermarkets, and that latter shortage is due to the scarcity of HGV drivers more than anything else, with that particular shortage bringing about the latest shortage, which is petrol. Apparently that shortage is now almost over apart from the south of England but we got 100 drivers from the army from Monday, oh, and some drivers are being recruited from the EU with our government grudgingly allowing them to stay until February (it was get out by Christmas). Today (October 5th) I hear that 5000 visas are available with only 127 applying so far. The nerve of it all, not helped by the fact our Prime Minister is about as useful as a fireman applying a small bucket of water to a forest fire. so there was some panic buying which didn’t help.

Who could have foreseen any of this……..I mean if only there was some way that workers could freely come over to the UK when there are shortages, a kind of system whereby UK labour supply could go to Europe when needed and then in turn UK manufacturers could use EU workers when necessary, in one Single European Market……..oh. Actually I don’t lay the blame completely on our unfortunate leaving of the EU as the just-in-time supply chain had been disrupted by the Covid shutdowns across the world, and then with countries around the world cranking up their economies supply lines are faltering, but even so one cannot escape the fact that EU drivers left the UK because of Brexit and that the supply lines are not quite as affected in Europe as in the UK, I could go on about the scarcity of fruit and vegetable pickers with crops ruined, but I’ll say no more!

However, I tell you why I am particularly incensed by Johnson. He has taken no notice of the findings from the Zoe Covid study, which has found different signs and symptoms for the Delta variant of Covid. This study, which you may or may not have heard about, has been developed by the health science company Zoe and its findings are shared with and analysed by King’s College London and Zoe research teams. I see from the blurb describing the research that the study is endorsed by the Welsh government and the Scottish government but no mention of the English/British government, hmmm.  Mr F and me, we are one of nearly 5 million contributors who log symptoms daily into the Zoe app (and of course, we log that we have no symptoms) and because of the number of contributors and the daily logging the study is able to pinpoint changes in Covid symptoms in real time. I expect you know that the classic symptoms of a continuing cough, high fever and loss of taste and smell are no longer the main symptoms of the predominant Delta variant, which is what most people have nowadays.

Instead if you have been vaccinated the first 5 symptoms of the Delta variant are:

If you have not been vaccinated, the first 5 symptoms are:

Check all of this out on the Zoe website for the difference between a cold and Covid – it’s a good read. There are also many webinars to be found on YouTube. The leading professor, Tim Spector, believes that because the three classic symptoms are still being promulgated from the main informants as the only symptoms, there are many people unaware that they need to take a test and isolate because their runny nose is actually Covid. Of course, this is tricky now that the cold and flu season has begun with many Brits having horrible colds. Mr F currently has a nasty cold but two lateral flow tests were negative, but to not broadcast to all that the Covid symptoms have changed is, I think, outrageous. End of rant of the day, but I hope you understand my view that this is serious, and is why I am beyond annoyed at our great leader – who apparently took a holiday during the start of the petrol  shortages. On that I rest my case on his usefulness.

After I’d written this I turned on the television and watched the London Marathon. What a life-enhancing experience it was to watch the thousands of lovely people taking part and hearing about some of the reasons they were doing the run. It must have been amazing to actually run in it, the atmosphere was electric and the crowds so enthusiastic. People are mostly so very kind and good-hearted, it was great to see this because at times I have to be reminded of that.

We haven’t watched as many films this month partly due to our holiday in Dungeness, and partly because most films are now going into the cinema first. I’m waiting for several to hit Netflix and Amazon and/or to come down in price.  The three we watched were good but won’t suit everyone. The first was A Quiet Place Part II (Amazon) which takes up the action exactly where the first film ended. I’ll say no more as it’s science fiction/horror and as I said won’t be liked by those of you who don’t like violence. Equally with the second film we saw, which was an indie set in Wales. Called The Toll (Amazon) it is not the 2020 Canadian science fiction film, instead it’s all about a toll-booth operator in rural Pembrokshire who has a murky past, which naturally catches up with him. This is the blackest of black comedies and we actually quite enjoyed it. And finally we watched the Bob Odenkirk film Nobody (Amazon) which has echoes of Michael Douglas’ Falling Down along with overtones of John Wick and a History of Violence, so you can guess what kind of film it was, but seriously Bob Odenkirk, in my view, can do no wrong and we thought it had an excellent well-crafted storyline. All three films get 4* from me as they were all enjoyable but none were outstanding.

I read a few books in September: the first two were charity shop buys that went straight back to the charity shop as I didn’t enjoy them. The first was Rodham by Curtis Sittenfeld.  It’s the reimagining of Hillary Clinton’s life and I read it to the end but thought it rather cruel. The second I got half way through and couldn’t finish. This was Machines Like Me by Ian McEwan, which I thought too clever by half.  It’s about humanoid robots that are so near human they are bought as companions. As they get powered up each day they think through who they are and what it means to be a human. I found McEwan’s philosophising about the meaning of life using the robot as a medium to be more than tedious – no thanks.

I downloaded the book recommended by Gail of Is This Mutton, Love in Five Acts by Daniela Krien a tale of five interconnected lives. Loved it. Very well written – thank you Gail!  On holiday in Dungeness, I skimmed through several books but read in its entirety one of Alice Munro’s books of short stories, Runaway. Oh my word, what a writer she is. No-one can write a short story like her and along with her distinctive touch I see, no I feel, she has a sliver of ice in her heart as the stories are truly devastating to read, but you read them and know you’re in the presence of greatness.

Another good book found in Dungeness was Frankie and Stankie by Barbara Trapido. Another amazing writer. I haven’t come across her before but just wow!  This is set in South Africa in the time of apartheid and it’s a tale told by a young girl in almost a stream of consciousness. I was so taken by it that, because I was only half way through the book when we left the cottage, I had to order a copy myself, and I have it now waiting for me to read. Furthermore, Trapido has this amazing technique of informing and telling you a lot about apartheid, but it doesn’t come over as ‘telling’ which is what you must never do when writing you have to imply and ‘show’. But this telling is amazingly Ok as it’s coming from this young girl growing up in South Africa. I can’t praise it enough. However, I am currently reading a book that has Dungeness as part of the plot, it’s Jacqueline Winspear’s Messenger of Truth and is, I think, one of many books about the main character Maisie Dobbs – finding it a bit stodgy tbh. It’s a bit of a contrast to Frankie and Stankie!

Here’s the dress I bought from a charity shop in Rye. 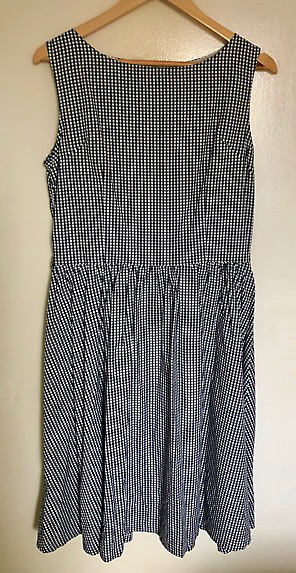 It’s lovely and fits beautifully and has a thin leather belt, plus an underskirt that makes the skirt part stick out. I bought it on a very hot day but brr, it’s too cold to put on now!

Here instead is a vintage tweed suit I bought a few weeks back in Lewes.

Rather looking forward to wearing this when out and about.

I love the jacket and think it’ll go rather well with black jeans.

Btw, I don’t sit around in the flat wearing a straight skirt. Here’s my go-to skirt for everyday indoor wear. I bought from Emmaus for £4 quite a long time ago

That’s all for now,