Apologies for the lack of a blog post last week and this late review, again!  But life just got in  the way and the days passed in a flash. Anyway, how did your October go? We’ve been house-sitting in Lewes while my daughter was away, and had a lovely time entertaining family and indeed friends, and doing this and that.

Anyway, rather than do the usual format I though I’d start off with some good news.. Now you might think I’d be focusing in on the Cop26’s two potential successes what with the agreement to end deforestation (that’s good) and the cutting of methane by 30% (yes, do) but I can’t quite get rid of some cynicism as the whole event seems to be predicated on first world countries (and mainly men) grudgingly agreeing to do things (good) but decades on (not so good). What about right now?  And what about stopping all fossil fuel mining? Oh, maybe one day, perhaps. And why have the G20 in Rome and then the very next day Cop26 in Glasgow?  I mean what about all those flights?

So I’ll stop right there. And instead, just share with you a lovely snippet about a living plant instillation being created for bees at the Eden Project in Cornwall.  Hurrah, good on the Eden Project as bees need our support. There were no photos of this in the article as the plants are not ready but it should be in bloom by late Spring 2022, and there will be variations of this instillation planted in London and Berlin. And furthermore there will be a website soon allowing people to use the artist’s logarithm to design their own version of her work. The artist, Alexandra Daisy Ginsberg, who created this hopes we can recreate her installation in whatever space you have from community gardens to window-boxes. I love that idea and will aim to bring you a good new item like this for every end of the month review 😊

And it’s been a good month for us because while we’ve had face-to-face contact with our family for months (as we were ‘bubbling’ with them) during the month of October we increased the number of face-to-face contacts with friends and what’s more, with everyone triple vaccinated we have even entertained a couple of friends indoors for lunch in our own flat and at my daughter’s house, and for both of these it was a first for nearly two years. I must say it does make life so much more worthwhile to live in a more normal way engaging with your friends and family in person rather than on Zoom or WhatsApp, as I think, and indeed many health studies concur, connecting with people is so important for one’s mental health and general well-being.

And yet I still don’t do large indoor gatherings; not restaurants, not public transport or pubs, cinemas, theatres, large stores or anything really where there are going to be a lot of people.  As far as I am concerned it doesn’t feel safe to do this.

And why doesn’t it feel safe? Because the UK is still riven with Covid and the numbers are not going down. I totally admit that I have an underlying anxiety about this pandemic and that yes, we have to learn to live with Covid, and go about life as normally as we can, I agree with that, but I still think the government is grossly inept and mendacious to not legislate for some sensible restrictions. I mean, could we not be mandated to wear masks on public transport, in shops and other indoor places? And what about ventilation being installed in schools? But no, there’s nothing other than us relying on the vaccine programme which is, btw, lagging behind other European countries and even the States where they are now vaccinating 5-yr-olds. Instead we are all supposed to ignore the increasing numbers of cases and the people who are hospitalised and their consequent deaths and live as though it’s all over. Well, it isn’t and I think it’s crackers. Enough said, but see this YouTube session with Professor Tim Spector and draw your own conclusions.

As far as cultural activities I’m still not doing as much as I used to in the way of going to art exhibitions and exhibitions generally. I was always very much stimulated by anything I could ‘look at’ so instead I rely on good films and documentaries, plus books. And talking about good documentaries, we watched a simply outstanding one on BBC iPlayer, Four Hours at the Capitol, which is also on HBO, so hopefully readers of this blog based in the States can see this doc. Oh.My Word! This is good. It interviews many participants of that fateful day when a mob tried and succeeded in getting into the Capitol to disrupt the verifying of the vote, including those who to this day do not see anything particularly wrong in what they did. Fascinating, but parts of this doc are truly horrifying – I mean that word – it is horrifying to see the battle to get into the ‘tunnel’. At the end of the documentary I was equally glad I’d watched it and then again really upset at the context. Because, this, people, was real life. I can take any amount of violence in films when it is constructed balletically and is obviously unreal (e.g.the John Wick series).  But this? This happened. And it was quite frightening to see and realise how people think and behave in these circumstances.  Honestly, it’s a sobering must-watch.

Anyway, the next day I said to Mr F, in contrast to yesterday I have to watch something insanely silly, so we watched Fast & Furious 9 (Amazon) which is absolutely stupidly ridiculous and also great fun. Because it was so silly, it only gets 3*! However, we also watched three excellent films: one I think will not suit everyone, It was Aliens (Amazon) which is the second in the Alien series of films and perhaps the best as its director was James Cameron.  I really enjoyed it so 4* from me. Then two that will be suitable for all to see, first is an excellent indie First Cow (Amazon) with Toby Jones, which is kind of a cowboy but not. Now anything with Toby Jones in it is usually good and this really was. Quite quirky and beautifully shot, so, again 4* from me.

And finally, The Father (Amazon) starring Anthony Hopkins. This is a wonderful film and, I think, the film of the year for me. It’s subject matter is dementia, and we avoided it for some time, but really there is no need as Hopkins is superb in it and the whole film gives us a picture of dementia from the sufferer’s point of view, so furniture shifts, people mysteriously change their whole appearance, and for a moment you are as bewildered as the character played by Hopkins.  I do warn you, you will cry at the end of the film. I rarely cry watching a film, but this one…. yes.  I don’t however, regret seeing it one iota, and I thought about it for a long time afterwards.  A true must-watch and 5*+++ from me.

We’re watching a lot of rather ridiculous stuff on television starting with Midnight Mass (Netflix) which is extremely well-acted but also rather gory and gothic. It’s about a little idyllic island off the coast of America with lovely people on it plus a lovely Catholic priest and uh, oh, there’s a vampire twist to the story. Enough said!  Equally silly is Squid Game (Netflix) which is a South Korean series depicting a rather nasty reality show that has one proviso, when the organisers want to eliminate you, you really are eliminated. It is quite shockingly over-the-top but rather addictive so we continue to watch it. We’re also watching Bordertown (Netflix) which is a Finnish crime noir – it’s OK. We have 4 more episodes of Schitts Creek (Netflix) to watch and I shall be devastated to lose my contact with the outrageous Rose family.  We’ve been watching it for over a year rationing ourselves carefully to make the entire experience last – they are the go-to watch if I want something sweet and heart-warming. Oh how I shall miss them.

Finally, television at its best is to be found through watching Who Do You Think You Are on BBC iPlayer. So far we’ve had the young stand-up comedian Josh Widdicombe and Dame Judy Dench. Widdicome was found to be related to Henry VIII, no less, and one of Dame Judy’s ancestors floated around Elsinore, I mean you could not make either of these up – what a great watch!

I seem to have not read many books this month but I make up for that by really appreciating the two that I have. I finished Frankie and Stankie by Barbara Trapido and loved every word of it. I say that because I often speed read and, tbh, I think I skip over some sentences while I do it, but not this book. And similarly, I am now reading every single word of John Le Carre’s A Perfect Spy. Oh wow, that man is a genius, his prose, the layers upon layers within this book about a man with a father and a son. Not saying anything at all about the plot (but see title) as it might give it all away. But for me, I savour every word in this book and I’m taking my time over it. I’m also dipping into Dr William Li’s Eat to Beat Disease which is excellent, although I could sum it all up  in three words by saying – eat more plants!

Now why do I buy so many coats? Well, it’s quite breezy where I live!  And it can get quite cold so it’s nice to ring the changes and wear coats according to your mood as well as the weather. See some pix taken by Mr F yesterday 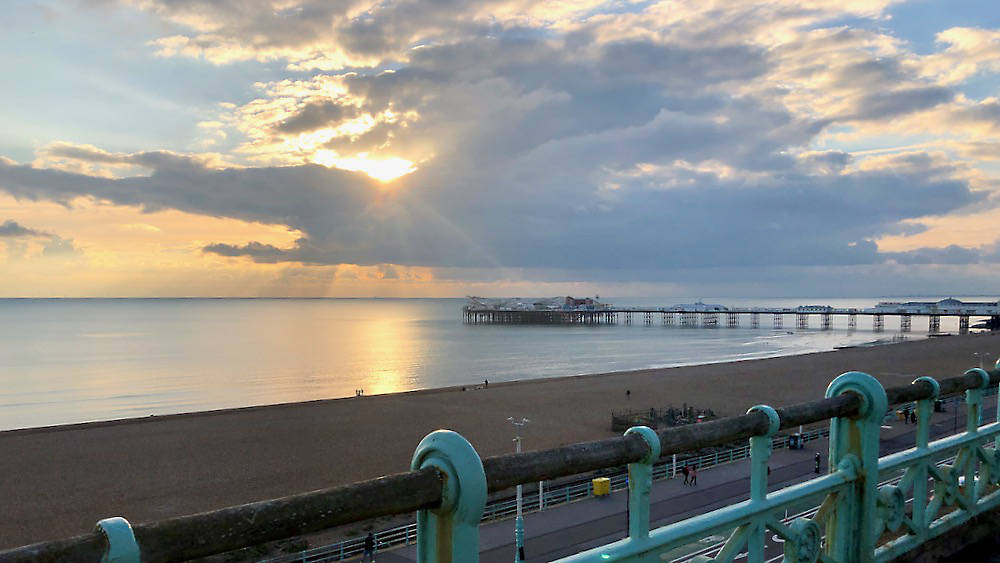 They were all taken at three in the afternoon. 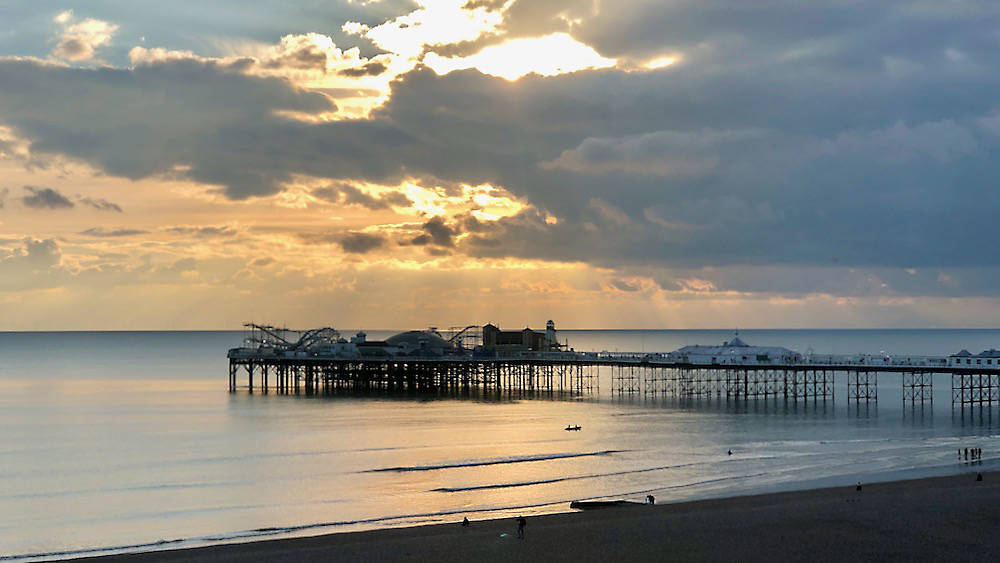 Look closer at this one below – looks like some brave souls are trying to swim! 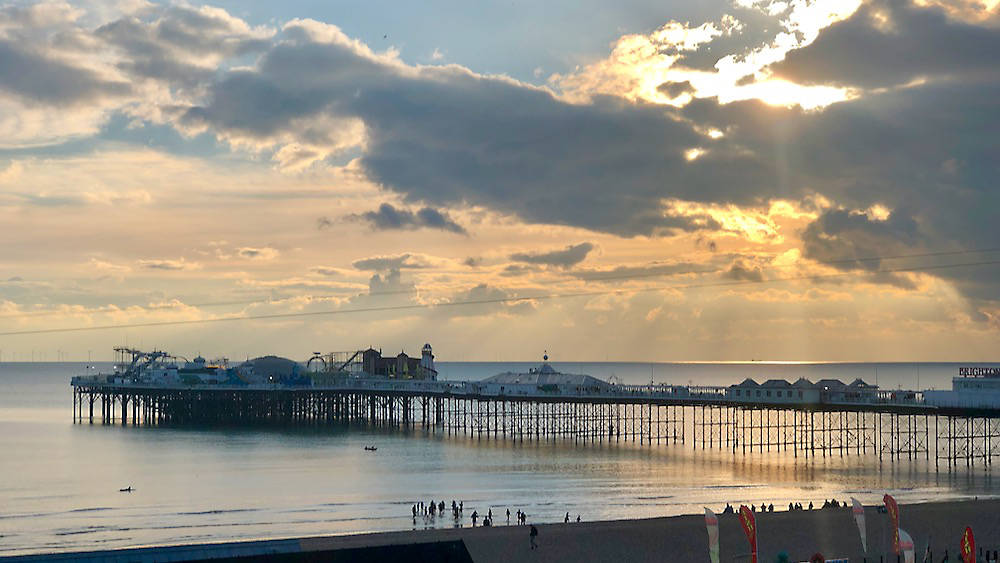 That’s all for now but I trust you are all OK and that October treated you well.