And thank you for the comments re: MrF and the concern you showed.  His follow-up clinic was briskly reassuring and we move on from there.  Meanwhile, having at the time been Mrs Competence personified 24 hours later I crashed and didn’t sleep well for several days. I too have moved on!

Actually so has the weather here as it’s almost hot in the UK. Mind you, although I don’t like being hot, I never truly believe it’s going to be warm, so I often put on too many clothes. Like Saturday (the hottest day of the year in the UK) when in the bedroom I put on my white charity shop jacket over dark jeans to go out.

Note the white plimsols!  As you know I have impeccable and flawless taste re: shoes!  Anyway, here I am in my daughter’s garden – phew! 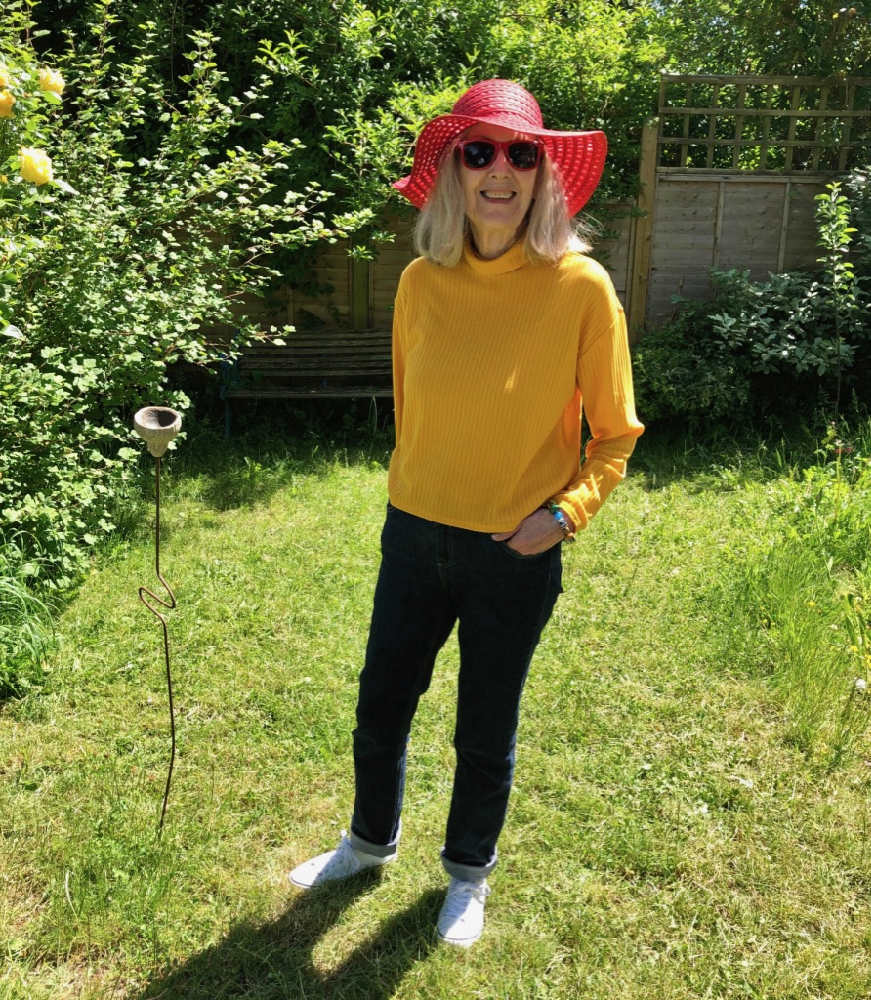 I do feel sheepish as I took a big bag of clothes to the charity shop including a rather dull grey hat (I rescued the green hat) and in the same shop I bought this red straw sun hat.  I really needed it to keep the sun off my face, or that’s what I’m telling myself!

The next day was cooler so I wore the hat I bought in Toulouse. 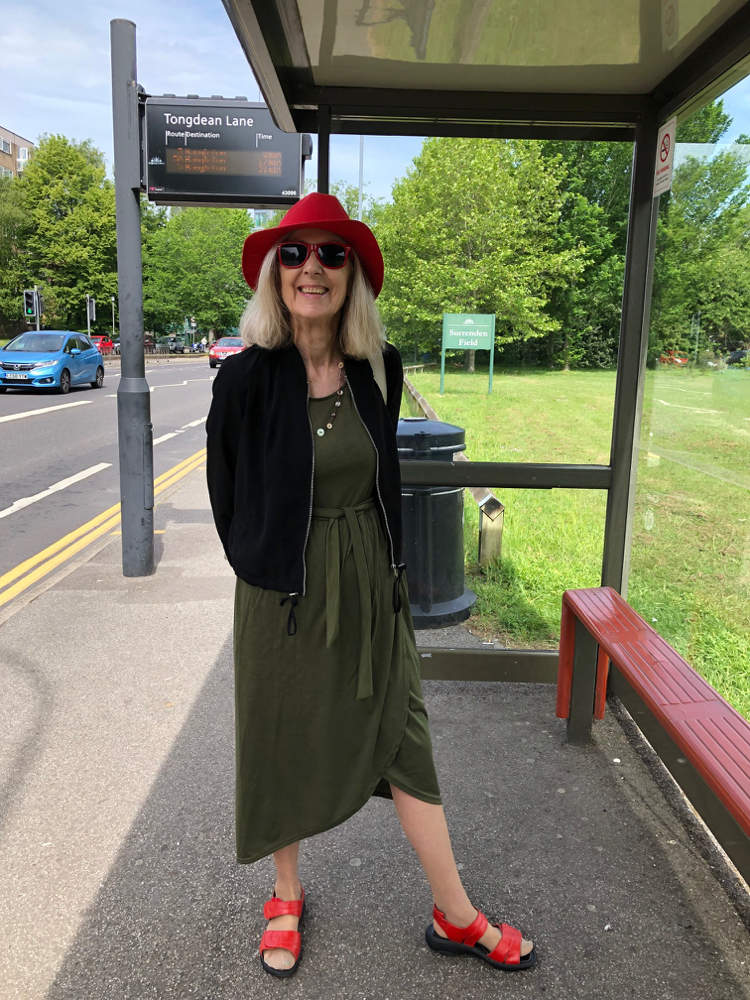 Those are charity shop red sunnies and that’s a charity shop dress, which is new, bought the day before at £1.99. As you know the hat was also bought new this year, but the H&M jacket was bought ages ago as were the sandals.

Here I am enjoying a joke with family at my birthday brunch. (Yes, another year – see the side for how old I am!)  Had a lovely time in the kind of place that’s heaving with Brightonians. 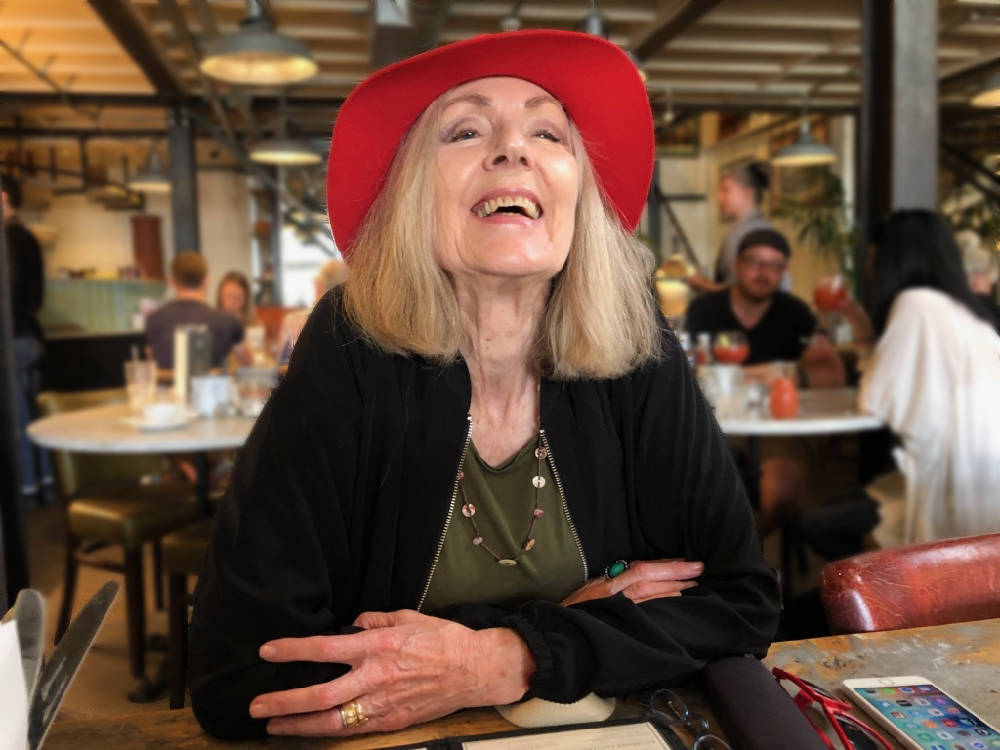 Definitely my kind of place.  And here below is one of my pressies (but whispers #Ididchooseit). 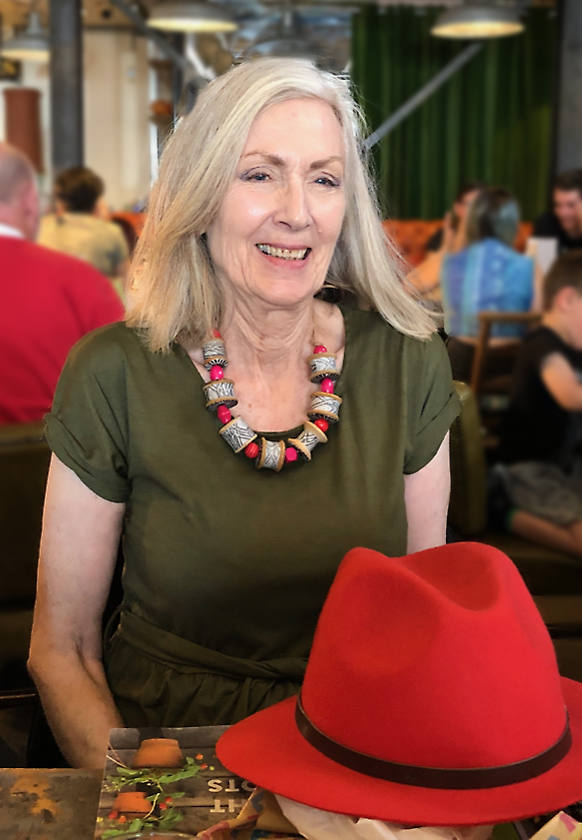 That’s a necklace made from cotton reels by my favourite maker Joy Fox and is exactly the type of jewellery I like to wear . Note the hat is off my head at that moment. One of last week’s commenters asked if hat wearing was a British thing or just a Penny thing.  So yes, although anything goes in Brighton, I was the only person wearing a hat! Btw, underneath the hat are several books on flower-pot and balcony gardening – my next project   🙂

That’s all for now.