We’re having a great summer here in the UK with lots of sun and blue sky so I’m wearing frocks a lot, which is unusual for me as skirts are my first love.  But autumn clothes are being featured in the fashion magazines and sales have started in our stores.  Yes, it’s August so let’s start thinking about winter!  Err, no!  In fact, apparently, we’re just about to have a heatwave in the UK.  Fashion media, stop!  Most people do not want to even begin to think of winter!

Yes, this is English weather at its finest, with sun and very little cloud, but a coolness to it all that lets you breathe.  However, yesterday, I was going out to lunch and I knew we would be sitting outside with our sun-loving friends, but it was that soupy humid heat that we often get when there’s no breeze.   And, oh boy, did I learn my lesson about fabrics!  Because at some point I need to think about what I’ll be wearing in January when I go to the Caribbean, and it won’t be a pretty thing that just happens to be made of, or includes, polyester.  (Also if there’s anything missing I should think about it now not in December when everything in the shops will be made of wool!)

Yes, I spotted this almost beachwear dress in a sale costing all of £7. 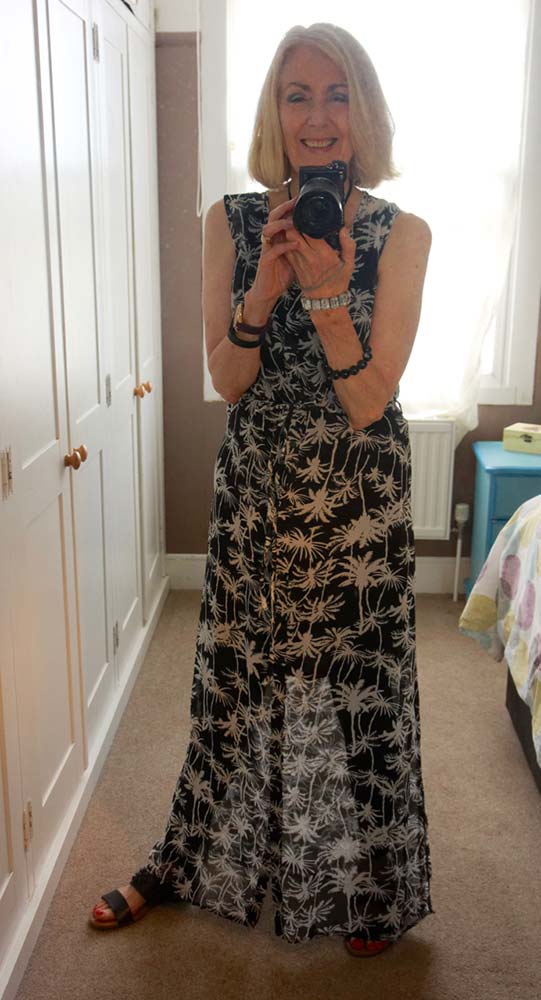 It looks lovely and rather suits me.  It’s floaty and I like the fact that it let’s you see the legs.  But I bought it in a shop with excessive air-conditioning, and didn’t factor in being in the actual sun.  I tried it on in my bedroom which was also cool, and it was fine, went out into the garden and ooof, I nearly melted in the heat as it’s not made of cotton but an artificial fibre. With the sweat pouring off me, I took it off pronto.  Hmm, I might wear it in England on one of those cool sunny days, or maybe in the evening when it’s cooler.  Btw, not cooling down in the evening, is something I can never get my head round.  Last time I was in the Caribbean it took me about a week to realise I needn’t carry a cardi around with me in the evening.

So I then put on this dress, but again it’s made of artificial fibres, so it wouldn’t do for this Sunday, but it will be great for when I visit my cousin for lunch when we will be sitting inside! Btw, the bedroom was so cool I also had leggings on for this pic, and excuse that black thing that keeps the dress on the hanger- I’ve cut it off! 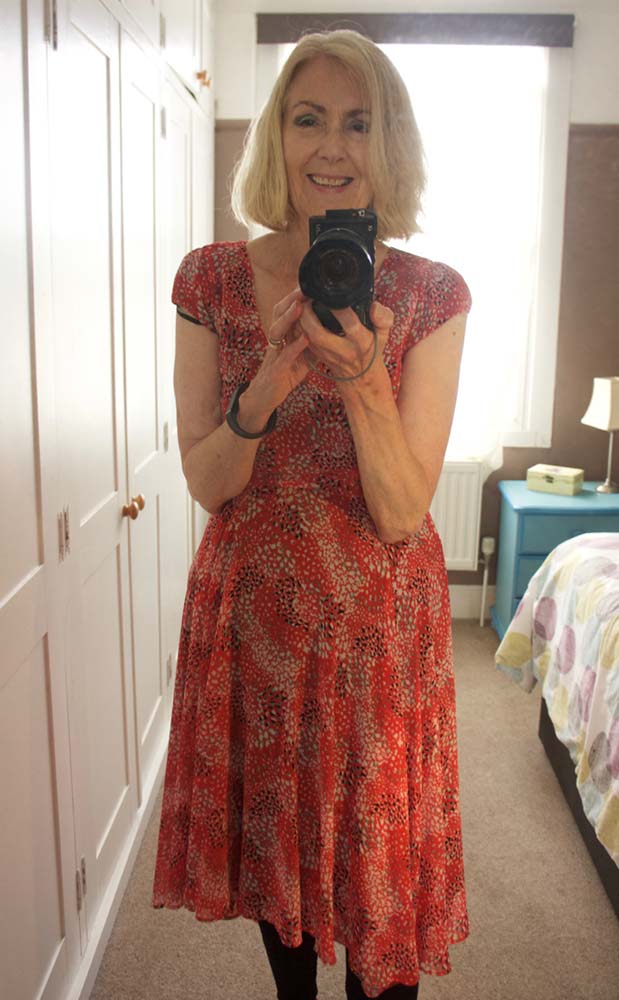 You know I think there are two types of people: the ones that sit outside in the sun at every opportunity; and the ones that don’t like sitting in the sun and even feel a bit wary of eating outside.  Btw, my friends put up a sun shade so it was fine, but another friend came round for coffee recently and said, with a look of relief on her face, ‘I know you’re not going to make me sit in the sun’, and we both looked at each other with complete and total understanding.   I’m willing to try, never say never and all that, but heat gives me a headache (migraine) and the sun gives me cancer (skin) so, end of argument as far as I’m concerned.  And yes, I know I’ve booked to go to the Caribbean but i) I won’t sunbathe, ii) it’ll be lovely to see a bit of sun in our grey winter and iii) I’m going to visit a friend (see below).

The third dress I tried on was full of creases as I’d pulled it out of my hot weather/holidaying abroad/ beachwear bag and put it on un-ironed.  I think I just about got away with it, the not ironing it, I mean.

It was perfect as it’s a floaty thin cotton dress that flaps around the ankles and draws in a breeze!  And reader, it was bought new nearly twenty years ago and worn in the Caribbean in 1999.  Here I am wearing it all those years ago!

I shall post another picture of it worn in 2017 with the same people! Hmm, I see I have the same pale arms, and also I’d just had a migraine (not a good traveller) but seriously, if ever there was an advertisement for ageing I think it’s this pic and the one above it, as I look so much better now I’m 70!!!!

That’s all for now, but do let me know if you suffer when people expect you to sit outside in the sun!

P.S.  Many apologies for not posting for 11 days but events (good ones) got in the way.

P.P.S Today is Monday so I’m sharing with Catherine Summers and her #iwillwearwhatilike session, which is about beachwear!

And finally, I’ve written a new post for My Other Blog – on class, actually! If you want to read it click on to the logo at the side-bar or, if on a phone, at the bottom of the blog.