I do hope you had a good Christmas and New Year and a bit of a break from work, although, if you’re a woman, and the majority of my readers are, I bet you did a lot of cooking 🙂

Throughout these ‘holidays’ or Twixmas, as some media types are calling it, Mr F and me, we had that streaming head cold (which for me started on Christmas day followed by Mr F two days later) so consequently we’ve stayed in and watched lots of television including (and after all I’d said about musicals, but we were feeling bit ill) Oklahoma.

Here’s what I thought of the film: the songs are lovely and I could almost sing-along with them (!) so over the decades, they’ve sunk into my consciousness; second the colours, oh, my word! The producers of The Marvellous Mrs Maisel must have been influenced by Oklahoma’s technicolour clothing and scenery, as Mrs M is definitely on the same neon-hued spectrum; and finally, Oklahoma is a very long film. Having complained about The Irishman and its 3 and half hours (which I’ll never get back) at 145 minutes Oklahoma has its longueurs, including a weird dream sequence that seemed to go on for ever. All I can say is, it was quite an experience, but probably one I won’t repeat!

And so to 2020 and a look back at last year’s projects and aims, and a positive look forward, definitely positive, to the new decade. And how far forward do you want to go, as in 2030 I’ll be 83!  Can you beat that! So consequently one of the first three things I’m going to talk about, and work on, in this new decade is fitness, fitness and fitness once again.

Yes, there’s no getting away from  it, getting older (there I’ve said it) is hard work. If any of you are worried about ageing I say this: 50-60 is young, really, it is; 60-70, well for me was absolutely no different to being in my 40s, I was fit as a fiddle, but once you reach your 70s?  Hmmmmmmmm. My view is that this is the time to put the work in. This is when issues and other things begin to crop up. So what am I going to do about the issues I have? Well, I’m going to pop into my GP and get myself checked out, and then I’m going to take up another fitness class, so that’ll be 3 classes per week. Plus I shall get together with my PT for a clarification of what exercises I do at home. Then in the Spring, I shall once again re-start the NHS ‘Couch to 5k’ programme. Don’t laugh, I know, I know. I never get beyond the 2nd week (and I take 3 weeks to do each week) but at least I try it. I’ll be running on the prom (the last two attempts were in a park, which got boring) and as I never get tired of seeing the sea – maybe this time!  And in the summer, of course, I’ll swim in that sea. So just because I feel a bit below par, which I do because of this dratted head cold, it is not the time to be down, instead I look forward to new possibilities and new classes and new exercises. Use it people (that’s your body I’m talking about) work on it, because you are not going to lose it, are you! Well, we all do in the end, but in the meantime, you know it makes sense to just push yourself that little bit.

And looking back at last year’s projects: oh yes, there was one that I discarded and that’s the YouTube videos. I know that some of you liked the few that I did, but actually it felt like an alien environment. I am first and foremost a writer plus I’m an extroverted introvert, with an emphasis on the introvert, so it was actually quite challenging to talk to the camera and act out stuff. Also, I realised that a lot of the videos out there are about selling products. People, as well as too many clothes being bought, there’s too much makeup out there. We have to consume less and anyway, I couldn’t afford to continue to buy new products, so, not doing any more makeup videos.  But on the positive side: I tried it and I could do it, and some of you liked what I did, but then, there you are, won’t do any more.

And now: the blogs. Yes, I have two blogs and one of them is My Other Blog where I like to write about more challenging issues. For the moment, I have decided to ration my writing there, and no I haven’t turned away from politics, on the contrary, I am hyper-aware of the state of the world, but I am keen to not be a Victor Meldrew type who constantly says, ‘I cannot believe it’, because of course, I cannot believe it. And at this precise moment I am neither happy with our political leaders nor am I happy with what, apparently, the majority in this country wants. Instead I’m very out-of-step with events that will now happen in 2020. And yet, I feel that we shouldn’t be led down a path of constant negativity – it’s a real thing – and for a greater analysis of this go watch anything by Adam Curtis. So, rather than be a moaning minnie and/or myrtle I shall pause this blog. It’s still there of course and never say never, but I have plans….

Yes, my latest project is to make people laugh a bit more. What a thing to say, and who do I think I am to possess that aptitude, but hey, I have an idea. I’m going to write down some of my memories of life, the universe and nursing (and boy do I have some stories to tell) plus other stuff, and unlike the YouTube videos, which did seem a really huge project, this is what I do all the time, it’s just writing, it’s just a development of this blog.

And here is where I’m going to say a very big, humungous thank you to you all. You have come with me on such an adventure, because when I started this blog, over 6 years ago now, I really wondered whether I could  manage 3-500 words every week. But I have managed it. And you have helped me with this through your comments and the knowledge that you read me. Thank you so, so much, I really do appreciate you.

The thing is you won’t see that writing, it will be done elsewhere, but I will continue the frugalfashion blog, absolutely I will, I love writing this blog, although note it’s going to be every 7-10 days. Also interestingly, my last post with the rant on The Irishman proved very popular, so the blog might continue as more of an opinion piece rather than ‘here’s this skirt I bought, what do you think?‘ However, I’m always keen to encourage you to push the boundaries and another aim of mine for 2020 is to wear slightly more outrageous clothes – I really would like to be more goth and wacky in 2020.

So, a few old pix here. Here’s what I aspire to wear in 2020 – my tulle skirt with leather jacket.

Haven’t worn  this skirt yet either – but I will. 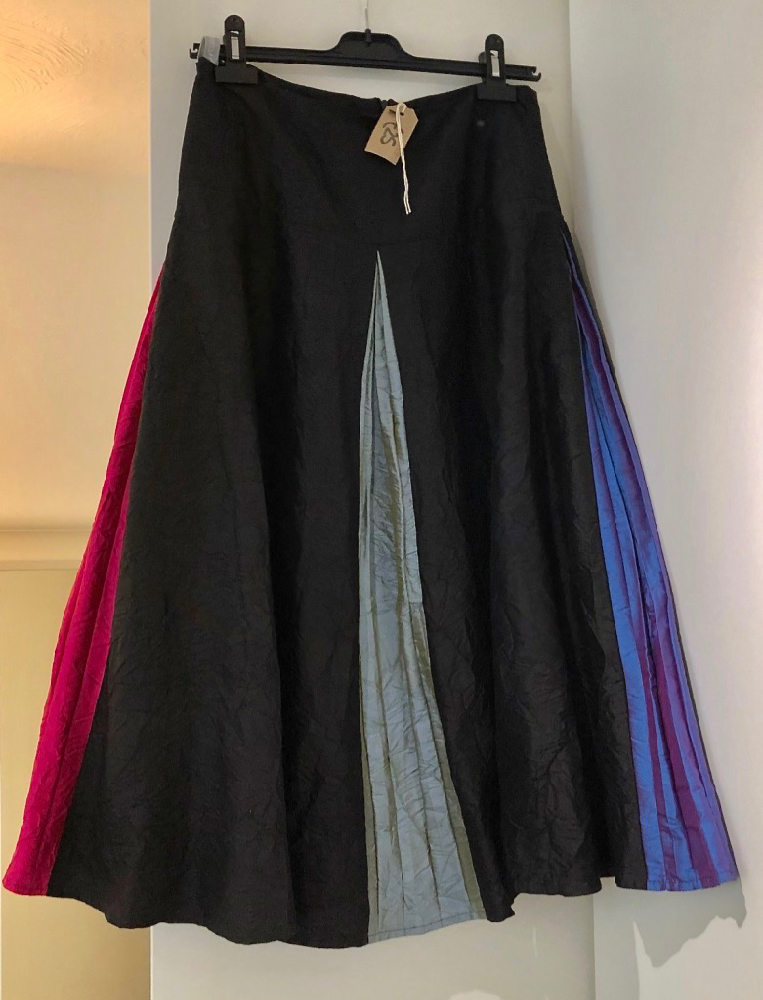 The outfit below is not particularly goth, but it’s jolly and slightly pushing the boundary with that hat. 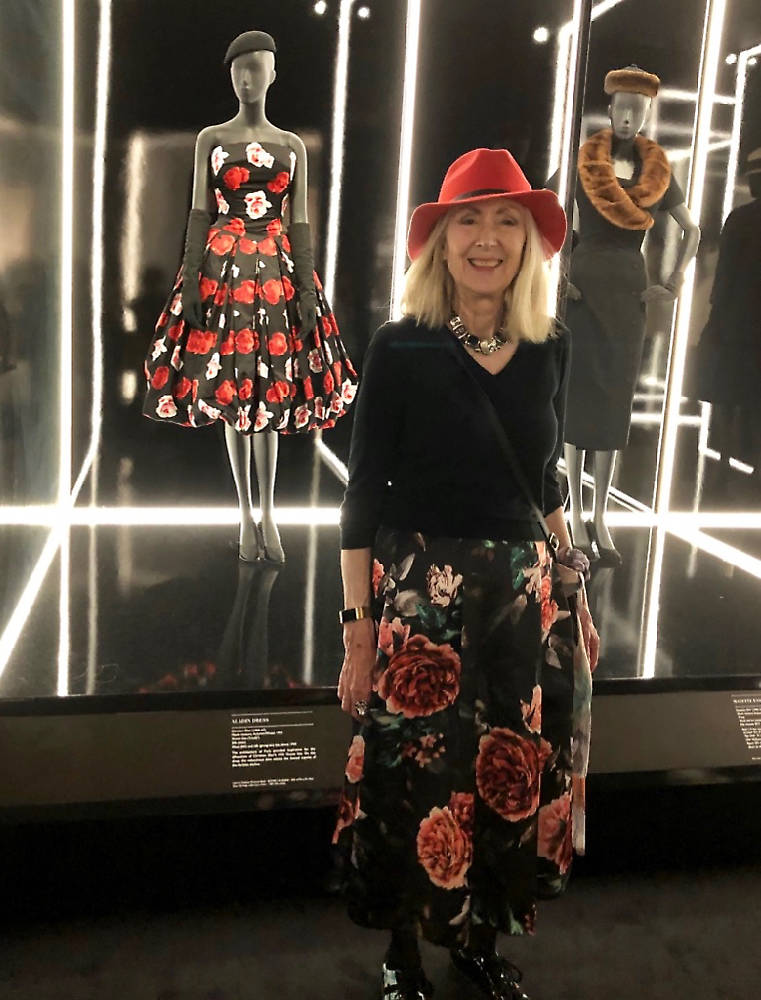 Don’t you hate the ubiquitous gnarled  hands that are used  in the media to depict older women – here are mine at age 73. 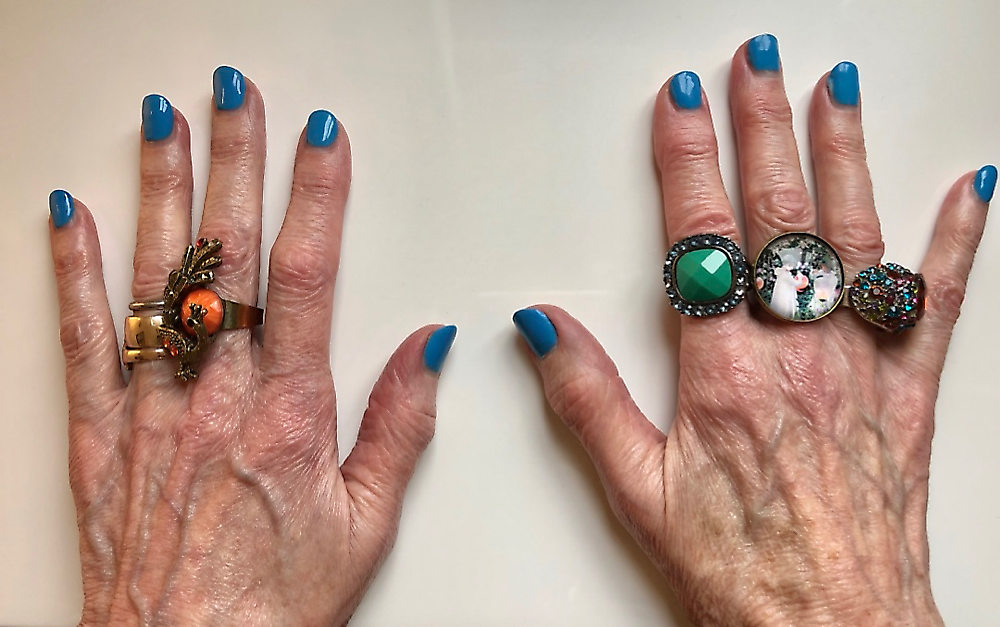 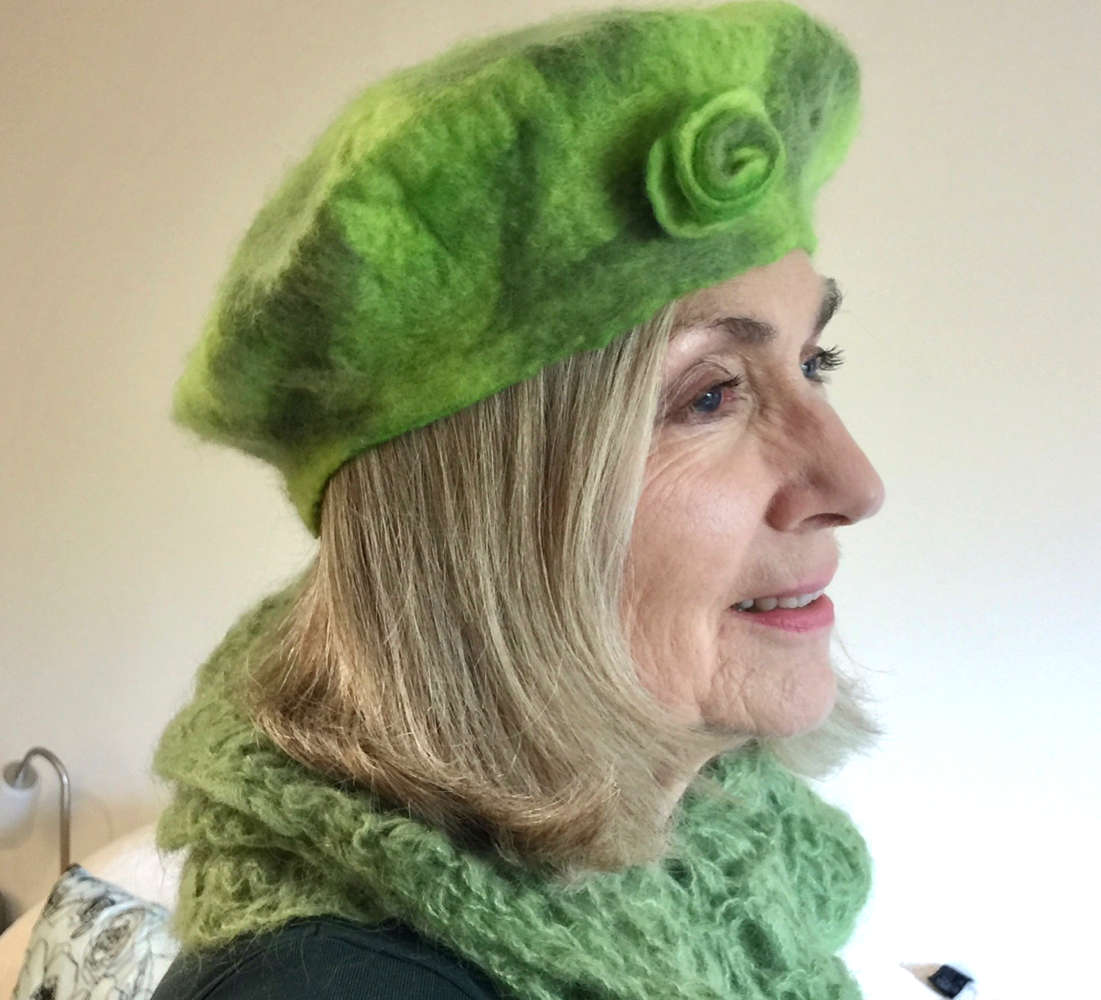 It goes well with my yellow coat. 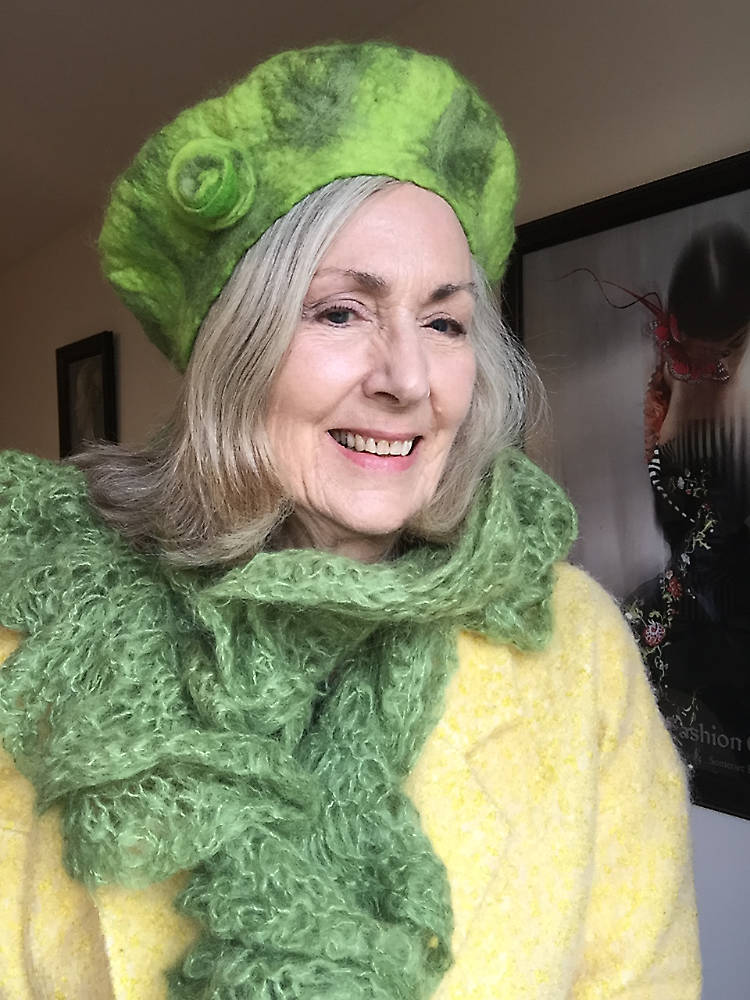 Here’s another shot of that skirt bought at the-Bias-Cut.com pop-up shop a couple of years ago. 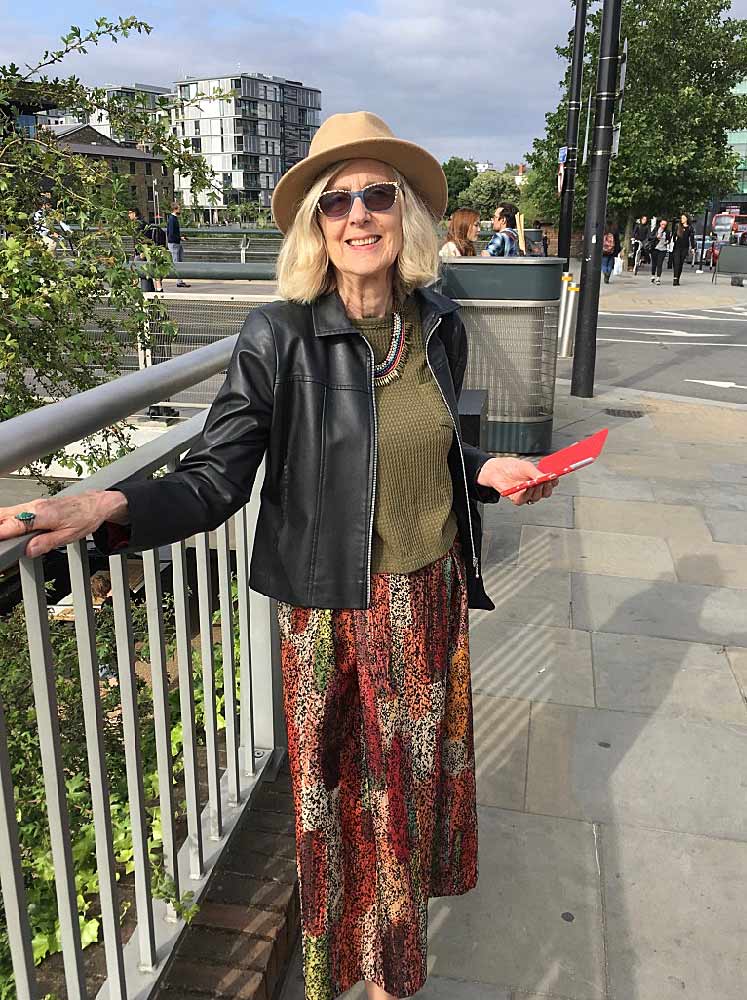 And here below, I aspire to get back to looking like this! The point is, yes, it was taken over a year ago but I want to feel fit and well again, but I will, it’s just a head cold. Interesting to see the way I did the eye makeup – must try the darker brown on the lid again 🙂 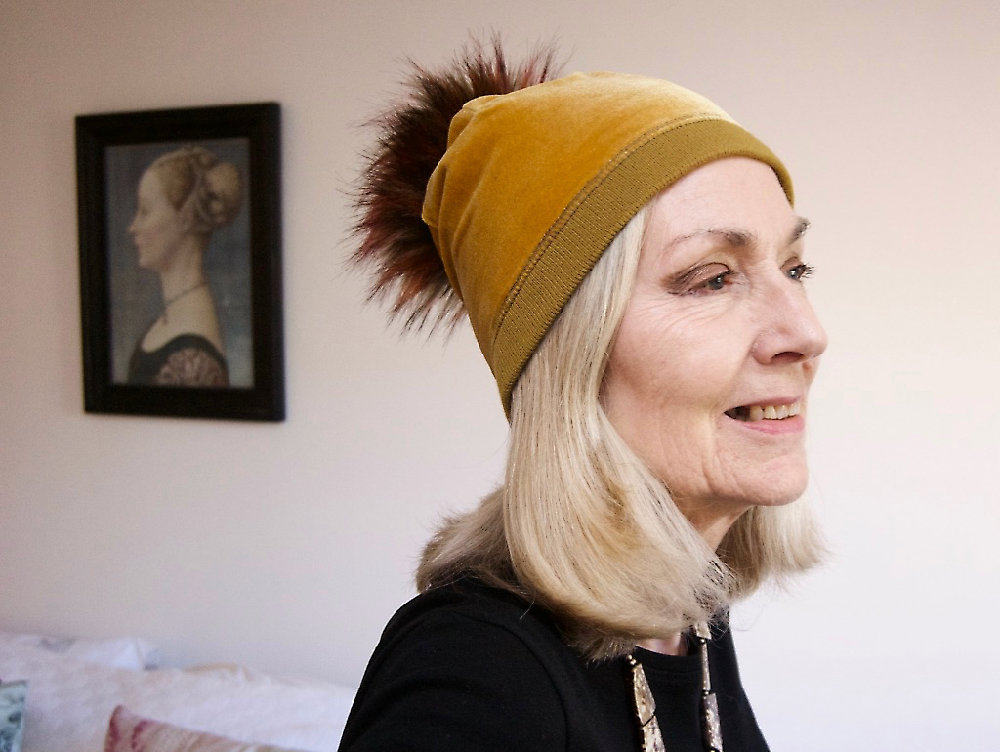 I am btw, making lots of healthy meals and just now breathed in the oniony smell of leak and potato soup! Ooof, that cleared a few tubes!!!

So, anyway, thank you once again you lovely people for reading this blog, and here’s to a happy and healthy 2020.