It’s the end of the month again so here’s another round-up of thoughts on these unusual times. As you can see from the title of this post, I now see myself as being in a semi-lockdown situation, because I have moved a little on my hard-line position. Wearing a mask I allow myself to go into the little local shops that let just two people in at a time and I have been to our GP’s surgery. Bless the NHS, it’s moved into the 21st Century, and for my appointment last week I spoke to the doctor via a version of Zoom, which worked very well, but for my situation I needed an actual physical visit, and was happy to do that, especially as when I arrived there were no other patients in the waiting room – rather a contrast to how it usually is. It was something occurring on my skin. Yup, my Scottish skin that now has numerous blemishes and sun spots needs constant vigilance. Around about this time the year I usually have an appointment with the Mole Clinic in London, but not this year, because of Covid. But something was not exactly right. So I don’t dilly dally with this and I get it seen. I’m expecting an appointment with a specialist shortly.  I hope anyone reading this who possesses pale skin is also super careful and that you get your skin checked regularly.

This month we also visited two sets of friends: one for lunch and one in the afternoon for a cup of tea and scone, and we also pop over to see our children at weekends.  But all of these visits have been in their respective gardens. Two things: we bought our flat on the understanding that we’d be entertaining many visitors, but without a garden we cannot do this. I know I say that I don’t mind not having a garden, as I have the sea and the beach so near, but I do rather regret not being able to entertain visitors. And this brings me to the second point, so what will it be like in the winter?  I rather think I might be getting out my fur coat for the garden visits as it is so toasty. I’ve not worn it for 2 years now, but I hung on to it and am so glad I did.

And gosh the change in the weather here in the UK is quite severe as it seems to be absolutely freezing now what with this north wind blowing down from the Arctic! It’s not exactly cold enough for the fur coat (!) but in the morning it’s definitely put the heating on (in August!) and wear a warm jumper weather! What a contrast to only a couple of weeks ago!

Here I am wearing a yellow wooly jumper bought from Warehouse earlier this year, which I see has started trading again. It’s paired with a skirt bought more recently from Mango.

And here’s the skirt again, this time with a cardigan bought in a charity shop, not locally, but on a 2015 cruise to the Faro Islands and back. I found it in a Shetland Isles charity shop and it’s still a favourite Autumn cardigan.

As a consequence of the weather I shall definitely start sorting through my summer clothes and getting out the Autumn/Fall jackets. In fact I have bought a Fall/winter long coat from Asos and I’ll show it to you shortly (not arrived yet) but did you know September is meant to be Secondhand September?  This is a campaign spearheaded by Oxfam beseeching us to forsake buying new clothes in September and instead urging us to go to our local charity shop for any clothes you might need/want.  I think I can do that and more about that in a future post this coming month.

What I am watching

Films: There will be no visits to any cinemas for the duration, so no seeing Tenet on a large screen. I shall wait for it to arrive on the small screen but I wonder has anyone seen it?  I find the director Christopher Nolan rather tricksy so am wondering whether I’ll like it – there’s a lot of hype, is it any good?  The thing is we tried one of his earlier films at the beginning of August, Inception, and had to stop watching after half an hour. What utter tosh, which was a surprise as I remember loving it when it first came out.

Anyway, we continue to watch films on the television but unlike June when practically every film we watched merited 5***** August has not been a particularly brilliant month although two films were really good and that includes the outstanding:

Dark Waters, starring Mark Ruffalo who also produced the film, which tells the story of how Dupont dumped poisonous chemicals for decades close to West Virginian farmland. I got a lump in my throat watching this film as it was truly wonderful seeing, with the help of the lawyer played by Ruffalo, ordinary everyday folk pitted against this heavyweight corporation and finally (because it took years) winning their well deserved payouts.  But oh my word the damage done and not just to West Virginia but to the world. I had a good look at my non-stick pots after watching that film! Overall it was an excellent watch and is available on Amazon.

The next best film we watched was How to Build a Girl, which was a sweetly funny coming-of-age story loosely based on the real life exploits of the journalist and author Caitlin Moran.  The American actor Beanie Feldstein (Booksmart) plays the nerdy teenager and, my goodness, she manages a really authentic Wolverhampton accent. Well worth watching it’s also available on Amazon.

Two nights ago we watched a rather odd film, The True History of the Kelly Gang on Amazon, starring George MacKay (1917) and adapted from Peter Carey’s novel. Not sure about this one; beautiful to look at but did I actually like it? Not really. The part I did like though was of Ned Kelly as a child, but once the gorgeous George MacKay came on the scene as the adult Kelly, it lost me. I think the director was aiming to be arty, but it didn’t do it for me. There were 3 other films we watched this month that are not even worth mentioning. Not a good month, although if you watch any of these, do try Dark Waters – it is extraordinarily good.

Television: We’ve finished watching I May Destroy You (BBC iPlayer) which we found both fascinating and addictive.  I love the actor Michaela Coel and so admire her writing. This is a series that’s almost mind-blowing but it is not for the squeamish as amongst other things it is about her sexual assault. The final episode was just amazing…. anyone else seen it?

We’re currently watching Lovecraft Country (Now tv) which is so very, very good. Again rather like I May Destroy You, all the main protagonists are black and we see them making a dangerous journey across the States, but I do really like the science fiction that plays an important part in this series – think of the title   🙂

Just started watching Russian Doll (Netflix) which is quite daft, and for a touch of class have you tried Philharmonia (Channel 4 – Walter Presents) which is all about a female conductor taking over an orchestra and shaking it by the scruff of its neck? Throw in a murder or two, and a deadly hereditary illness and you’re got a heady mix – with lovely music of course!

Here’s another moody shot of the sea and the sky. 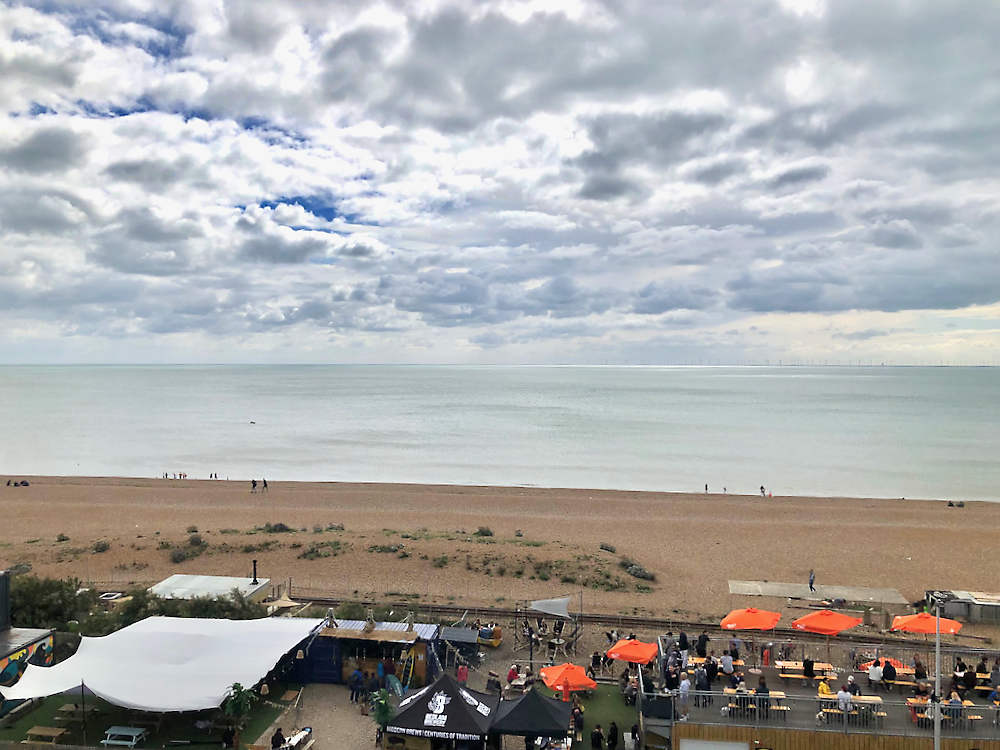 Those bars.  I’ve seen them even more crowded. What’s more on a warmer day the beach is heaving. People are not self-distancing all that much and it’s not helping as cases are rising in the UK. Take care people, take care.