I really shouldn’t promise anything as there are no skirts in this post! Instead I have a few pix of me in a variety of outerwear.

Yes, what a contrast the weather has been lately.  This week the weather in the UK returned to being really chilly with a cold and quite strong north wind, but last week was gloriously warm and sunny. This is the type of outerwear  I put on during the cold weather. 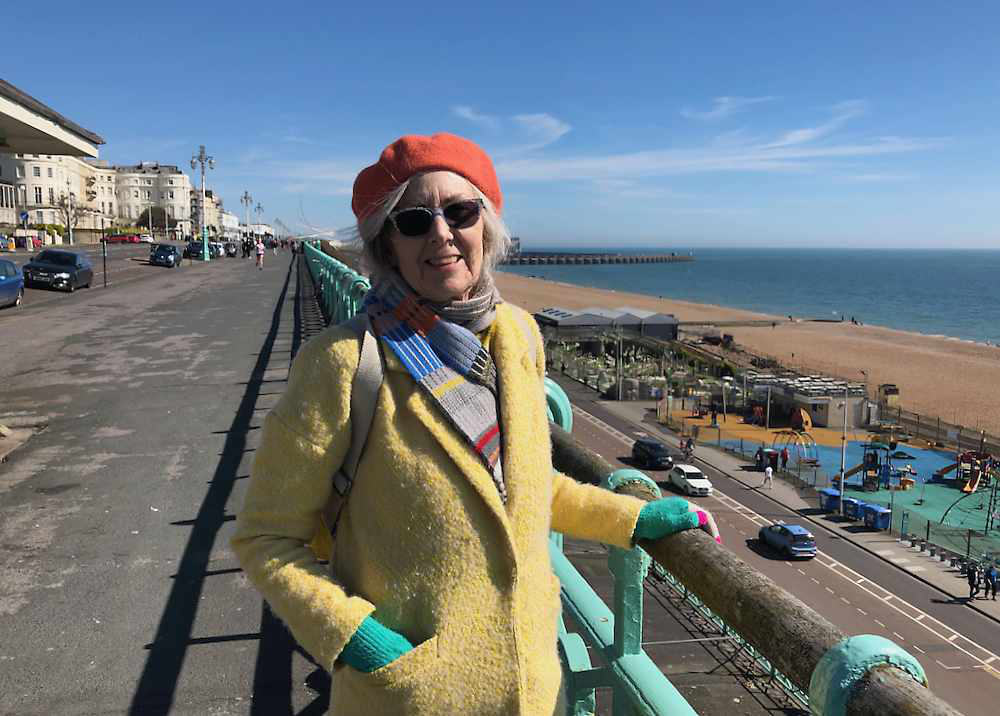 There’s that £5 charity shop long jacket again plus an orange beret, woolly scarf and gloves. The sea breezes can be really cool!  And then, wow, last week was really warm and sunny. So I got all my summer clothes down from the top of the wardrobe and went through them. I took most of the thinner, summery items out and sorted through my winter clothes putting away the thicker wool sweaters and cardigans. I started another charity shop bag and into it went two jackets I did not wear once – not to worry they cost not a lot 🙂

Our flat is on the top floor of the building facing both west and north, and consequently is probably one of the coldest in the block as it has more windows and exposed walls than other flats (as do the two flats under ours) but we haven’t got another flat on top of us to warm our interior. Our previous flat faced north and I never knew what the temperature outside was and therefore always made the mistake of going out wearing too many clothes in hot weather. I seem to be repeating this error in our new flat in KempTown as this is what I wore on a really hot day last week! 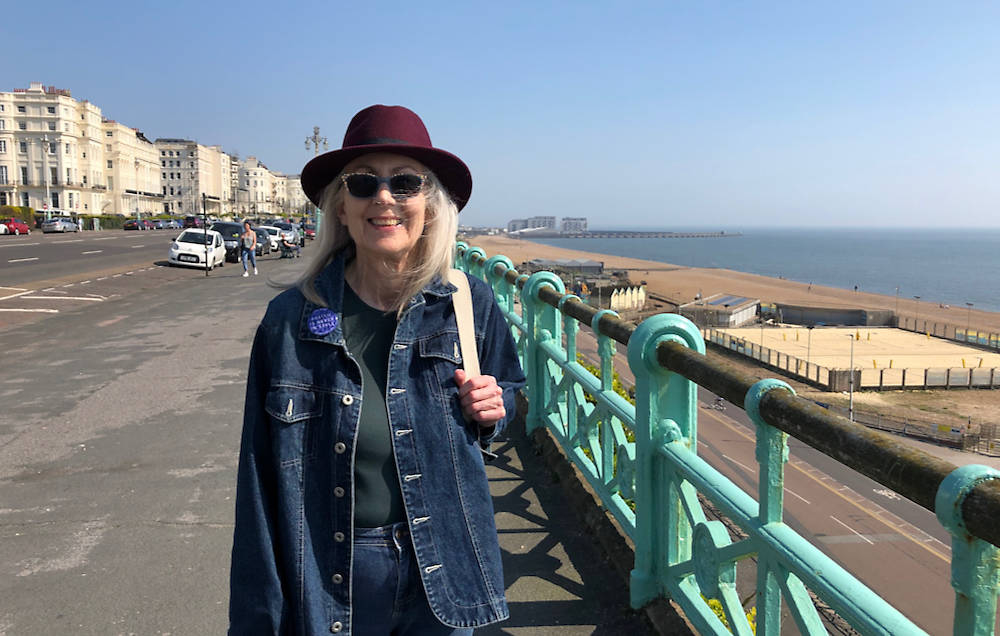 I’m a happy bunny being outside but the top is too dark, as is the hat! And is that a spare tyre creeping up on me?  Yes, it is! I find I am obsessed with food: the obtaining of it, the cooking of it and the eating of it. Hmm, I so understand the people who are stock-piling, not that I am doing that, but the uncertainty of getting a delivery slot has been quite stressful. Thankfully, I have just secured a recurring weekly delivery slot, phew! But I realise I speak as someone who has the huge privilege of being able to afford the food on my plate. I worry for those who have lost their jobs. Everything is so uncertain but how much more terrifying it must be to have to decide whether to pay the rent or buy food – because this is happening.

Btw, note the lack of crowds on the beach and the very few people out and about. Most of us seem to understand the importance of staying in unless you absolutely have to go out.

My routine is that I go out in the early afternoon but one day we went out in the evening. 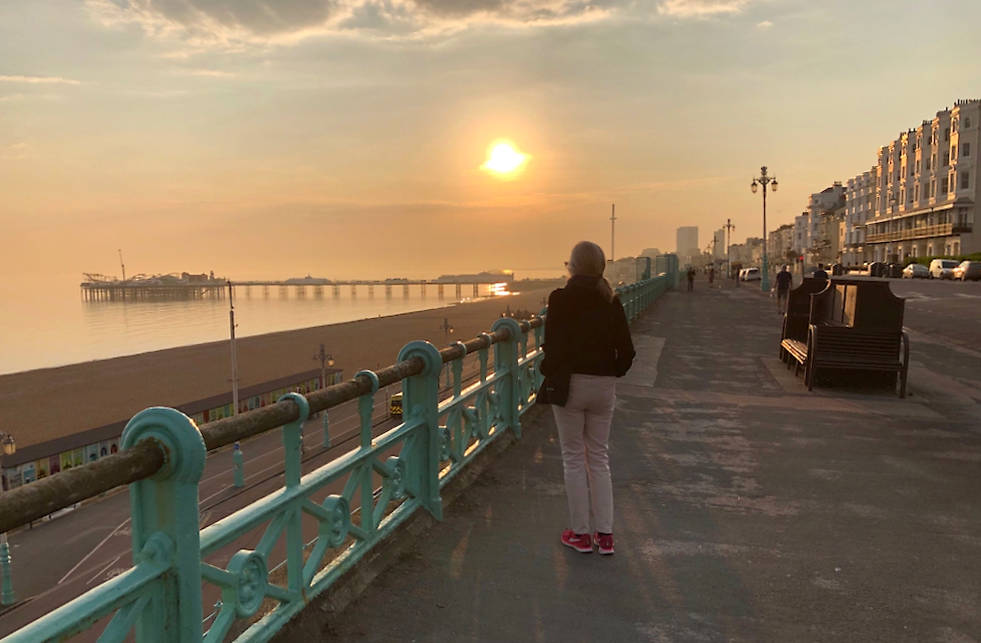 Just look at the sky and the sun setting in the distance. It was cooling down so I wore a thin black zipped top with the light coloured (with a hint of pink) jeans. Those are my deep pink running shoes. Will I ever run again …….?

And now it’s returned to being quite cold! I’d changed my duvet from a winter to a summer duvet but two nights ago was so cold I had to put an extra blanket over me!

The nearest I’ve got to dressing up and wearing something funky was the sequinned jacket I wore for a Skype lunch I had with a friend – it felt good. 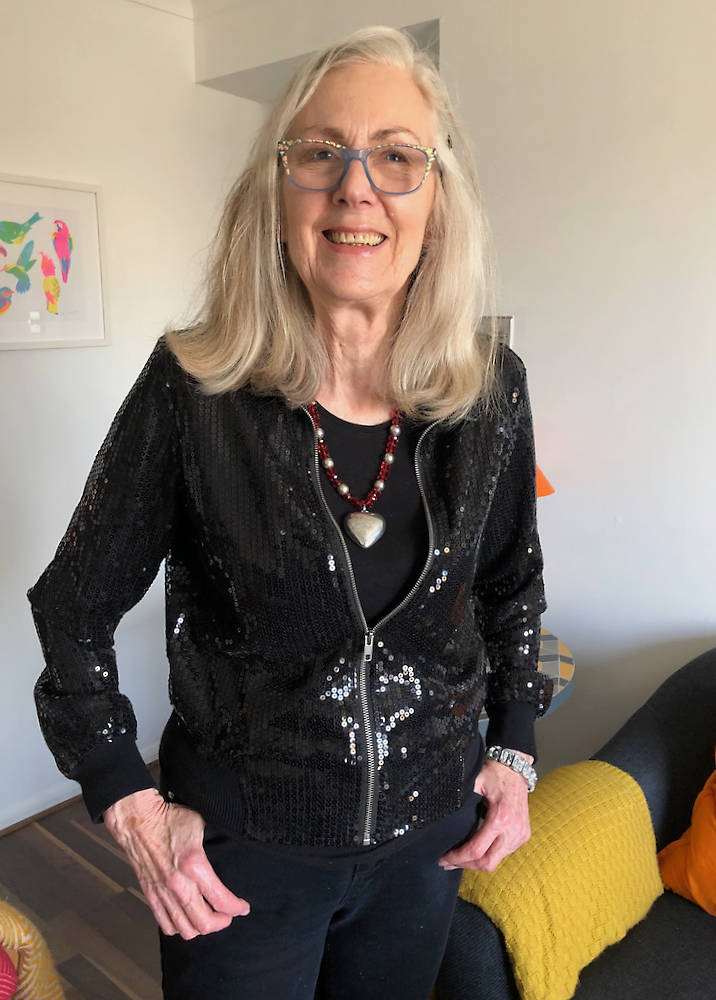 I have btw, decided to wear the glasses for the duration as they might be giving some protection to the eyes. And talking about protection, what do you think about wearing a mask outside?  Here in the UK the official advice is that masks are only for health workers on the frontline, but there is a growing movement amongst scientists that a mask worn by the general public may not prevent you catching the virus, but it could prevent you infecting others, because those walking around without symptoms will be prevented from spraying their infected droplets around.  Interesting.  My next craft activity is, I think, going to be making a homemade mask.

These challenging times are so odd, on the one hand I have plenty to do and I’m not too bothered about the lockdown, yet on the other, it is so abnormal not to be meeting friends and family, and going out and about to all the things we used to do.  We have adapted, and we are using technology to talk to people face-to-face. For example, yesterday we had a coffee with someone living in France using FaceTime on our MacBook.

How are you adapting and keeping yourself sane? For me the afternoon is more relaxed and I either continue writing or watch a documentary. Who’s watched Tiger King on Netflix? OMG is all I can say, what an amazing car-crash telly experience! This is where lack of regulation gets you – out of control breeding of wild animals and completely crackpot people in charge of them.

While I watch the television I like to use my hands and I have taken up the hem of some new jeans bought from Warehouse (you’ll see them soon) and I’ve mended a few items. As I said I shall start attempting to make a mask and also get knitting, more about that in another post.  And, gosh, we watch a lot of television in the evening as my concentration for reading has gone right out of the window. This is not television in real-time btw, but series and box-sets. Here’s a list of my favourites:

And I’m looking forward to watching the sci-fi Devs which is coming to BBC2 on Wednesday 15 April which I’ll watch on iPlayer.

That’s all for now. I hope you’re keeping safe and well 🙂

49 thoughts on “Sea-front walks and a sequinned jacket”