As you know I’m a deeply frivolous person but, occasionally, I get serious.  And this is one of those occasions – bear with!

I was going to give you a blow-by-blow account of how we came to our big decision. You know, the one that’s got me de-cluttering.  Very successfully, I must say.  And I still might do that in a later post, but I want to go beyond a focus on myself and comment on a slightly bigger picture.

I’ve been reading Ashton Applewhite and her book This Chair Rocks: A Manifesto Against Ageism – it’s good.  Also, been looking at the British Geriatrics Society blog and some of their posts.  I’ve left a couple of comments below-the-line.  Well, why not?  I was, once upon a time, a nurse.  In the era of hospitals actually having beds to spare to look after older people and not consider them ‘bed blockers’ – don’t start me on that!

This is leading up to me commenting on the current (mainly 1st world) cultural narrative around ageing, which is about being healthy and vibrant and, above all, active, which is absolutely good.  I totally accept that.  But. I just want to unpick this a little.

Two things: first, a couple of weeks ago I read about ‘superagers’.  The University of Boston has conducted some research on people over 65 who have brain function on a par with 25-year-olds.  And the one common factor?  These over-65s engage in exceedingly demanding mental exercise – indeed, the researchers suggest you should take on a topic or interest that almost makes your brain hurt.  The best brain exercise you can do is, therefore, not a crossword or sudoku (never got my head round that at all) but learning a completely new foreign language or a musical instrument.  And this, apparently, along with vigorous exercise, is the way to go.  It’s an area of on-going research, they say, but these ‘superagers’ flourish in later life, because this pushing yourself out of your comfort zone will rewire your brain and help you stay mentally healthy.

There’s a bit more to it than that summary.  However, I don’t know about you, but I feel exhausted just re-reading the above paragraph!

Then, I note the environment within which I write – the fashion blogosphere.  With the honourable exception of some of the fashion, makeup and lifestyle bloggers in their 60s (you know who you are) mainly I get quite a sense of a lot of avoidance tactics around ageing.  There’s a lot about anti-ageing and looking younger than your years disguised as ‘looking your best’.   Because looking 10 years younger than your age is, so obviously, such a good thing.

Well, I think we should enlarge our idea of beauty and our idea of age, and what it is to be old.  And get away from this dread and denial of ageing.  Instead, let’s be radical!

First of all.  Let’s see older people as individuals.  And have none of this 65+ grouping of older people.  Does it drive you nuts when the fashion media does outfits for 40, 50, 60+?  I could spit tacks, as quite often the 70+ group is left out or called ‘onwards’! I took this up with one well-known blogger when she wrote about the 40, 50, 60 or whatever age groups!  I commented that as a member of the ‘whatever’ age group, could you possibly give us a mention!

Or if 70+ is included it’s a very track-suit, comfortable kind of clothing – err, no thanks, that’s not me! Anyway, i) a 65-year-old is going to be very different to a 95-year-old. And ii) us older people, we’re all very different, distinctive and unique.  When we’re born – think of our genes, class, IQ, health, weight, environment, upbringing, family just for a start. And, as we’re different then, so we will also age differently.  Think of the range of life experiences we all have.

And because we are all going to age differently, a continuum of ageing could show at one end the frail older people who need help (but more about that in a tic) and on the other fit and healthy older people.  Meanwhile, those ‘superagers’?  Applewhite would see these as the outliers of the healthy and active older age group – these are the exceptions.  Not everyone will be like this.

It is OK to just be. To think. To sit. Have a cup of coffee. And allow yourself to be old.  Why the dread?

The reaction to our decision to move to a retirement flat was telling:  people in their late 70s and 80s said, ‘Oh, I wish I’d done that’; friends in their early 70s said, ‘oh yes, I’ll probably do that, but later’; and people younger than 70 mainly said, ‘WHAT!  And one person, said, ‘but why would you want to be mixing with older people?‘ Hmmm, I gave this person a longer response, which could be summed up as i) don’t be ageist and ii) I am old, sweetie!  The thing is there’s a lot out there about helping, serving, and delivering services to older people, who are so obviously in need.  My response to that is what a passive, negative, one-way (as in receiving stuff) view of ageing.  This is very much a deficit model of ageing – that we all fear.

Anyway, here are some ideas (not a manifesto – too grand) I have about ageing. And by ageing I mean really ageing, as in, not being that vibrant, fit and active older person that everyone wants you to be.  And I have some strong views. Feel free to get back to me on these.

Actually, first and foremost – acknowledge your mortality – yes, do. Where do you think all these aches and pains and other stuff is leading?  Face it!

Then, having done that, do some forward planning. You don’t have to move from your home, like I am (Btw, home to me is wherever I hang my hat) but have a think.  Is your home accessible when your mobility starts changing?  Can you adapt your home?  If not – what are you going to do?

Add to that by doing a little research.  What is out there for you?  In the UK, at the moment we have, or let’s put it this way, just about have, a system of social care.  You think it’s still going to be around after this election (and yes, I am being political here).  Nope – there will be nothing.  And will there even be carers available that you pay for?  Because the market will always step in won’t it?  Maybe, but with us leaving the EU, from where will these carers be recruited?

I think it’s important to dig deep into the current way of thinking, to understand and really look at where all this ‘austerity’ is leading.  Is this the way to run a country? You want a small state – but what exactly does that mean?  And are there other ways to fund our state?  Yes, there are other ways.   But as this is a fashionista blog (most of the time) I won’t give you an economics lecture.  But I do give you permission to be angry, to demand, to not be grateful.  And if you give me the argument that older people are doing so much better than the younger generations I would agree with you, up to a point.  But it is false news to talk about a ‘war between the generations’  because of the baby-boomers so-called wealth from our houses (which can’t be bought by the millennial generation) and our final-salary pensions (which neither I or Mr Frugalfashionshopper happen to have).  This so-called wealth (Really?  There are a lot of people just existing, you know), this is down to our historical position and, policies, always, always the policies of the day – which we vote for.  And if austerity continues everyone will suffer – young and old.

And then, yes, look once more at yourself. No need to make your brain hurt, go for and try out some challenges and new experiences. It could be fun!

Aspire and expand your horizons. Actually, get out of your comfort zone.  Take social media. If I had a penny for every time someone around my age wrinkles their nose at the very idea of social media.  ‘I’m sorry, it’s not for me’ they say.  Often, it’s about the medium – books are better.  Or it’s the social media environment, which is inevitably the work of the devil.    But social media is a reflection of society and your self.  You are a lovely person and therefore your Facebook page will be lovely.  Every time I hear this, I cringe, as my iPhone (could be iPad, or laptop) is an open doorway to people, art, politics, literature, popular culture, news, exhibitions and the current memes of the day.  Everyone is different.  But my point is, don’t close those horizons. Don’t block new experiences. Don’t restrict yourself to what you know.

Say to yourself, and to others – it is OK to be old. Really, it is.

As well as the digging deep under the covers to look at the society we live in, do a little campaigning around ageism – could be in the fashion field, or medical, or whatever, you decide.

All the above is going to be expanded and worked on – because this is what I’m really engaged with.  And note I’m not putting healthy eating, sleeping and doing a lot of exercise here – that’s obvious.  Everyone knows that – don’t they!

And if you’ve read to the end.  Can I say I made this post more political than usual, because I was inspired by two Brighton Festival events.  The first was George Monbiot‘s take on society’s epidemic of loneliness and his uplifting and life-affirming solution that together we can act to defeat society ills.  All that with songs – it was a brilliant gig.

And then here’s me rushing off to a talk given by Polly Toynbee and David Walker. 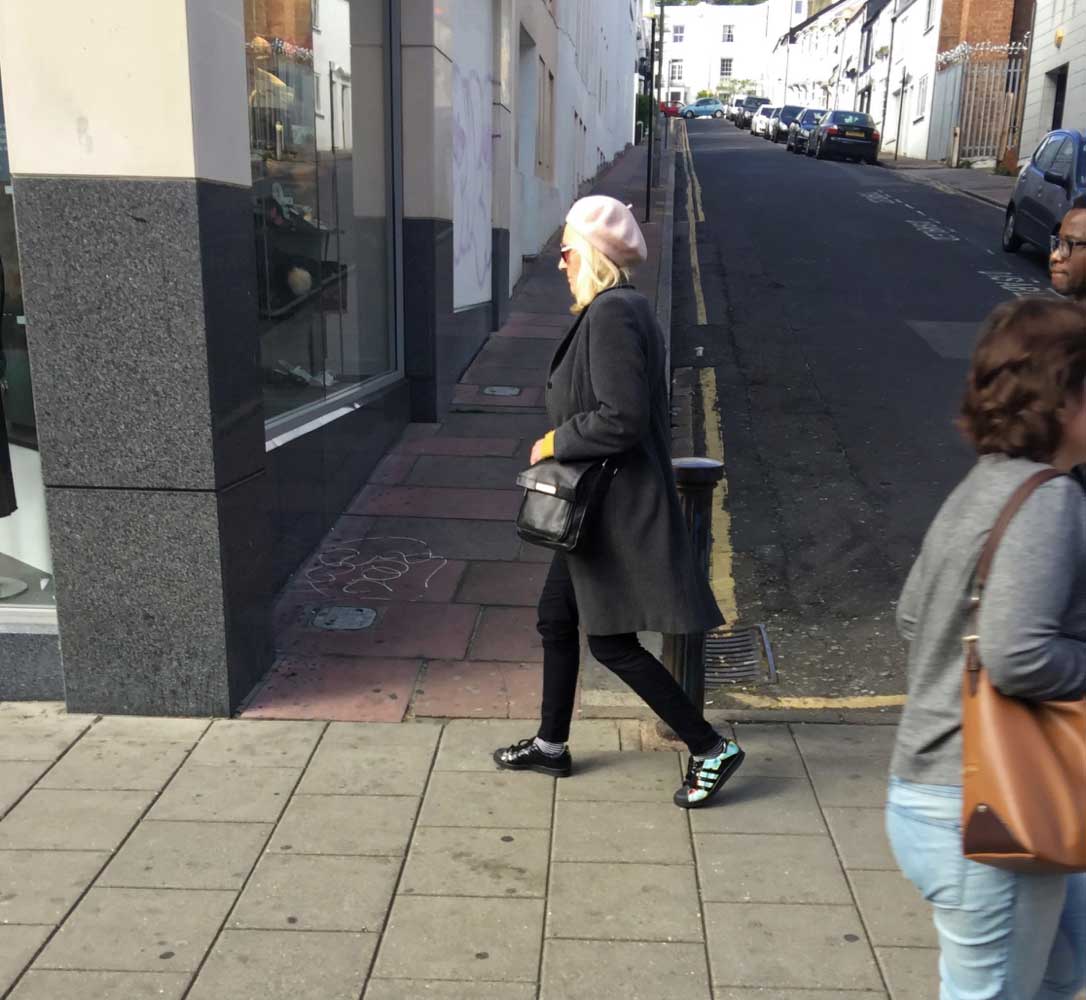 Don’t you love the shoes?  The blue bit is an exact depiction of the bones of the foot.  Flat shoes can be wacky! 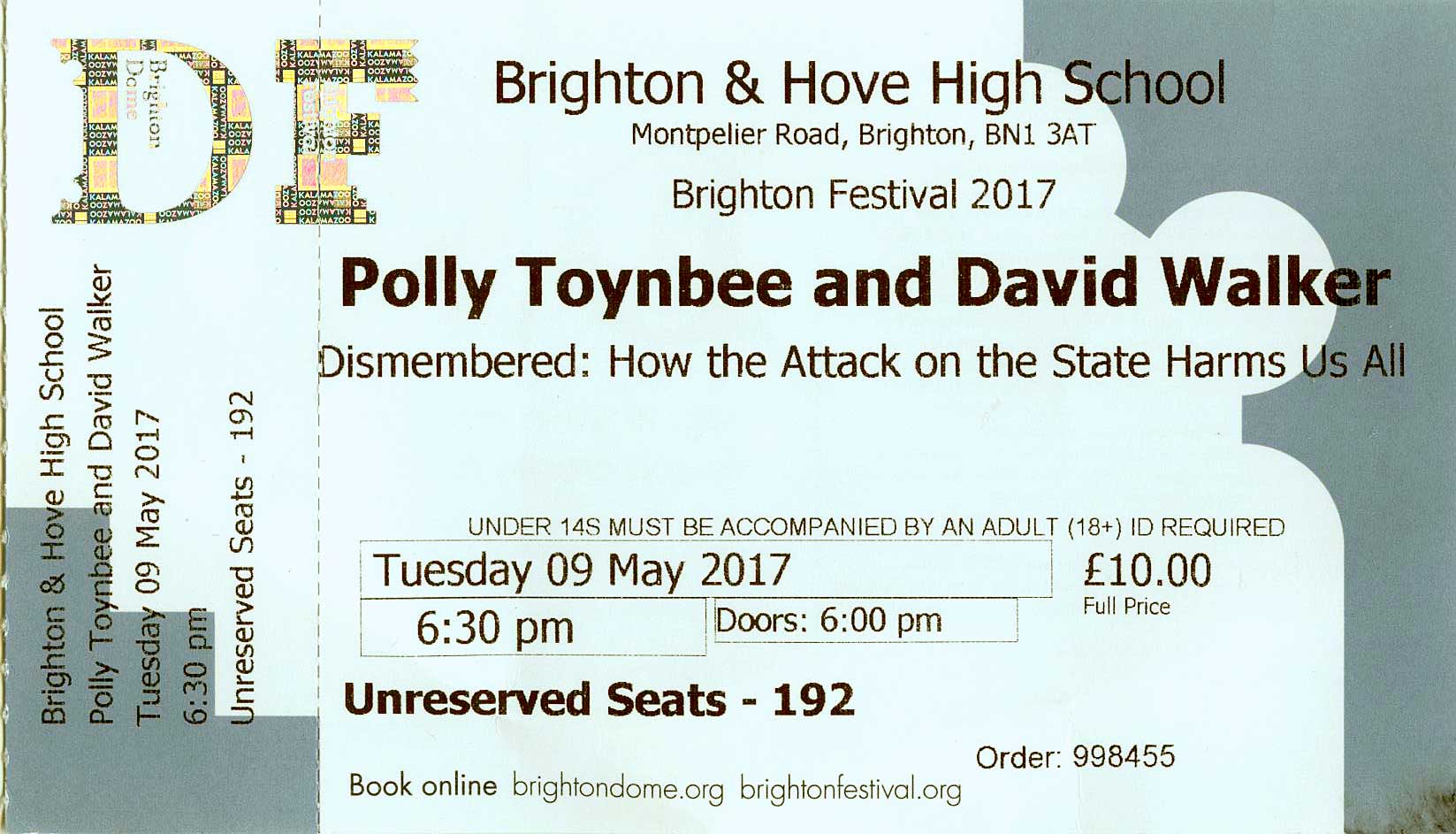 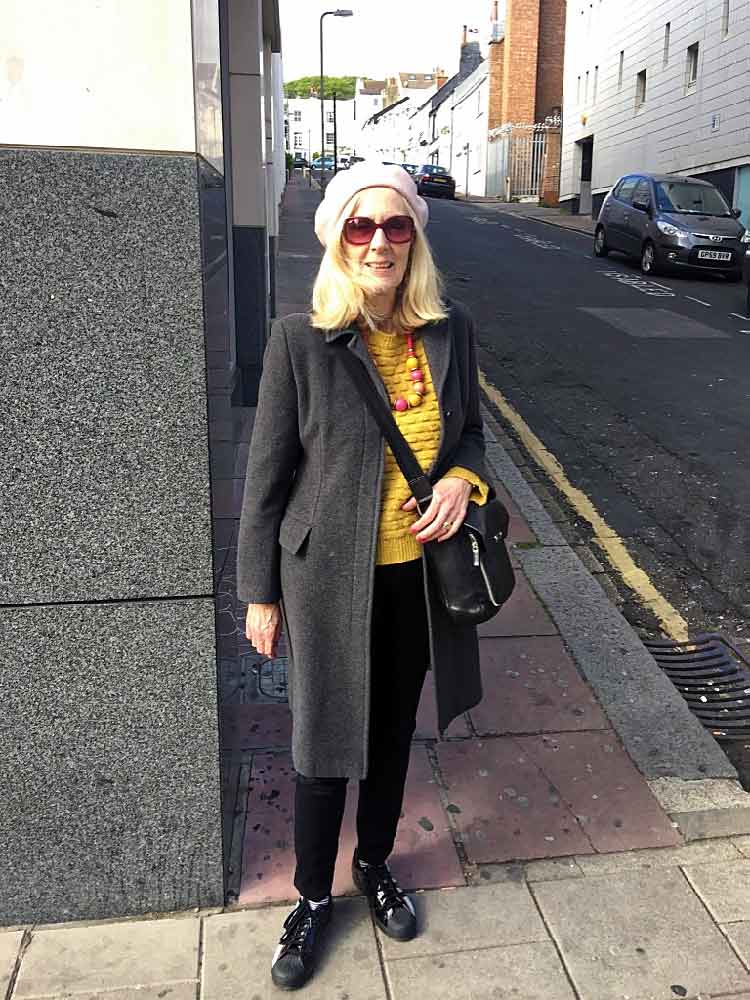 Normal service will be resumed towards the end of the week.

37 thoughts on “Radical ageing – is it possible?”