This is my first of three planned trips to London. We had such a great day on Wednesday. 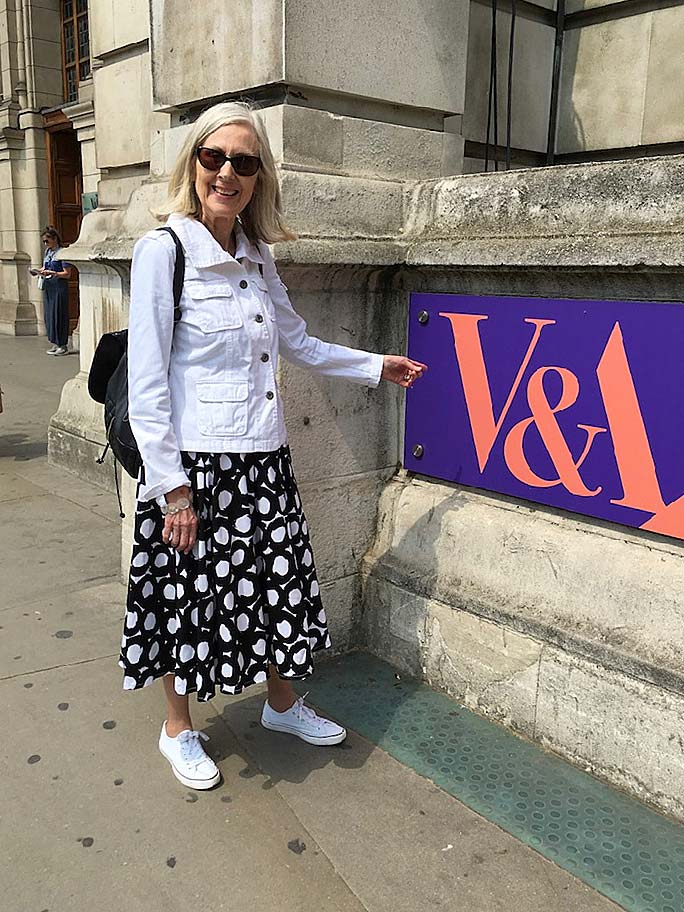 We went to the Victoria & Albert museum to see the exhibition, ‘Ocean Liners: Speed and Style‘ and what an unexpected delight it was too. It’s on only until 17th June – if you get the chance do go.  Btw, both the skirt and jacket are newly bought from a charity shop (combined price under £10). 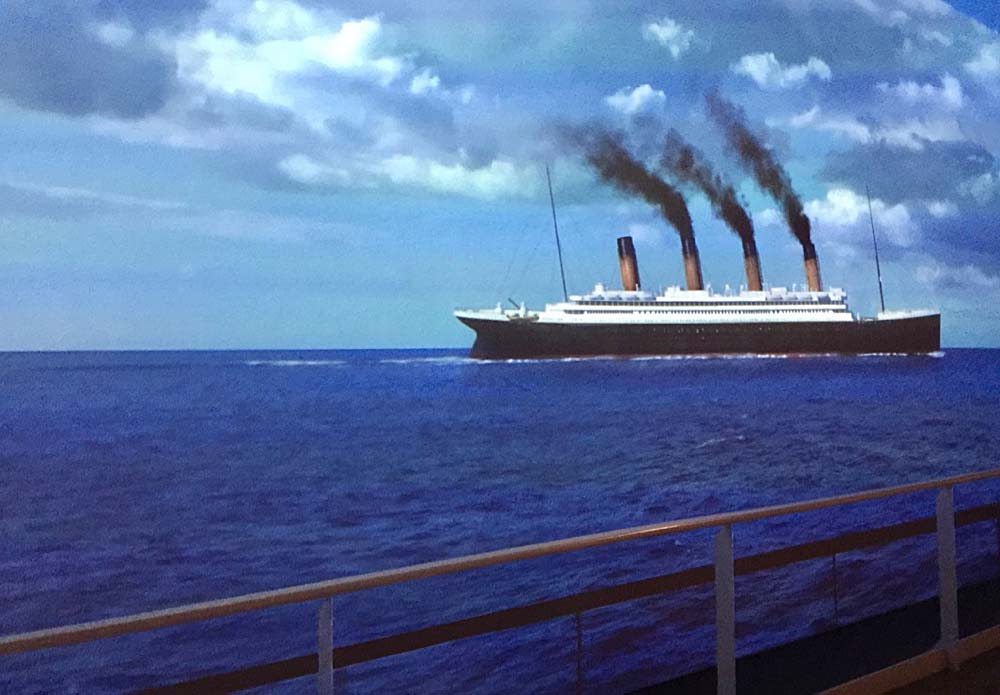 This was a huge moving feature on the side of one wall.

The exhibition gave you a good sense of times past and how the rich and famous conducted their lives with style, and some fabulous dresses! 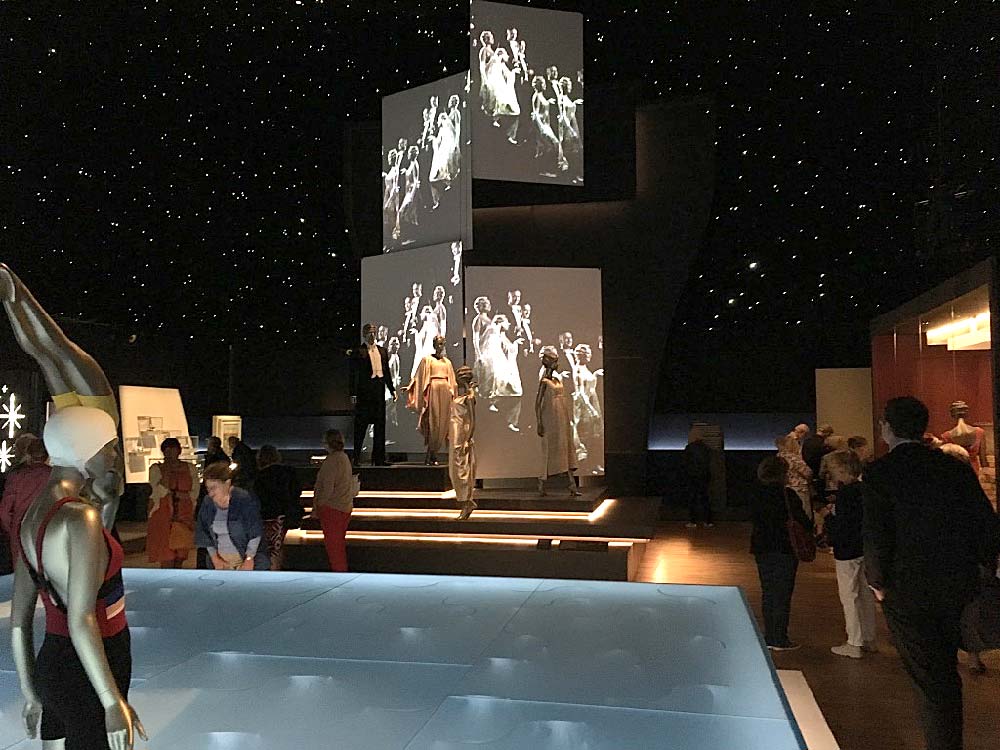 Here’s Marlene Dietrich’s suit worn on one trip across the Atlantic, 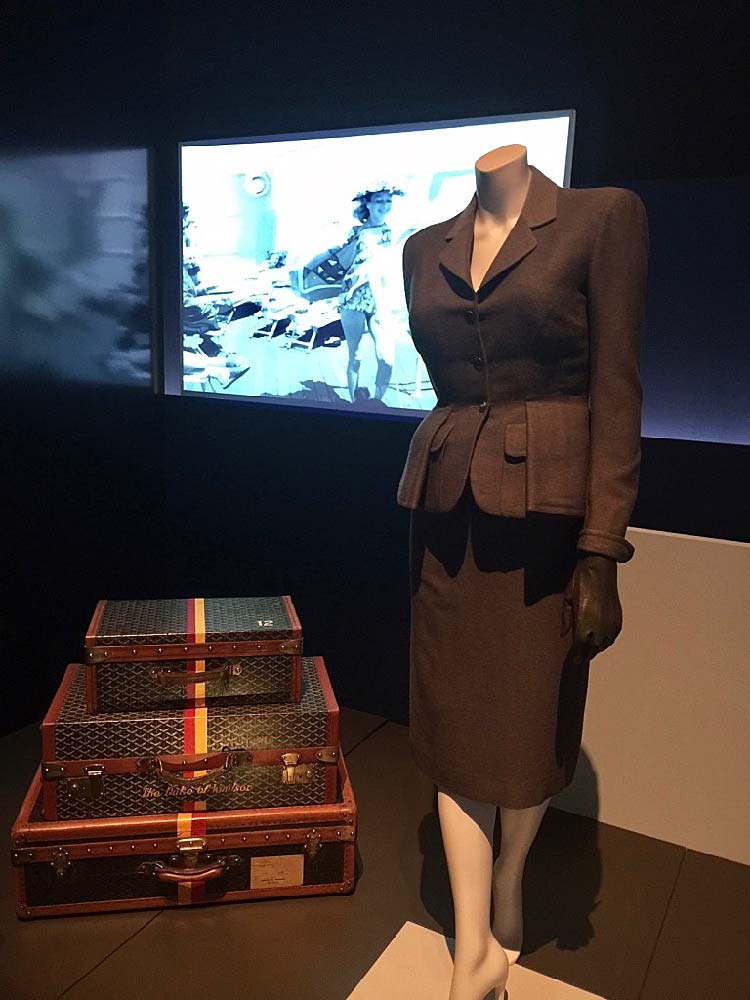 But not everyone on board was wealthy, as these ships carried emigrants to the New World, plus mail and goods. In the days before long-haul flights became almost common-place, it was the only way to travel across the Atlantic.  Here’s the menu for 3rd Class passengers. 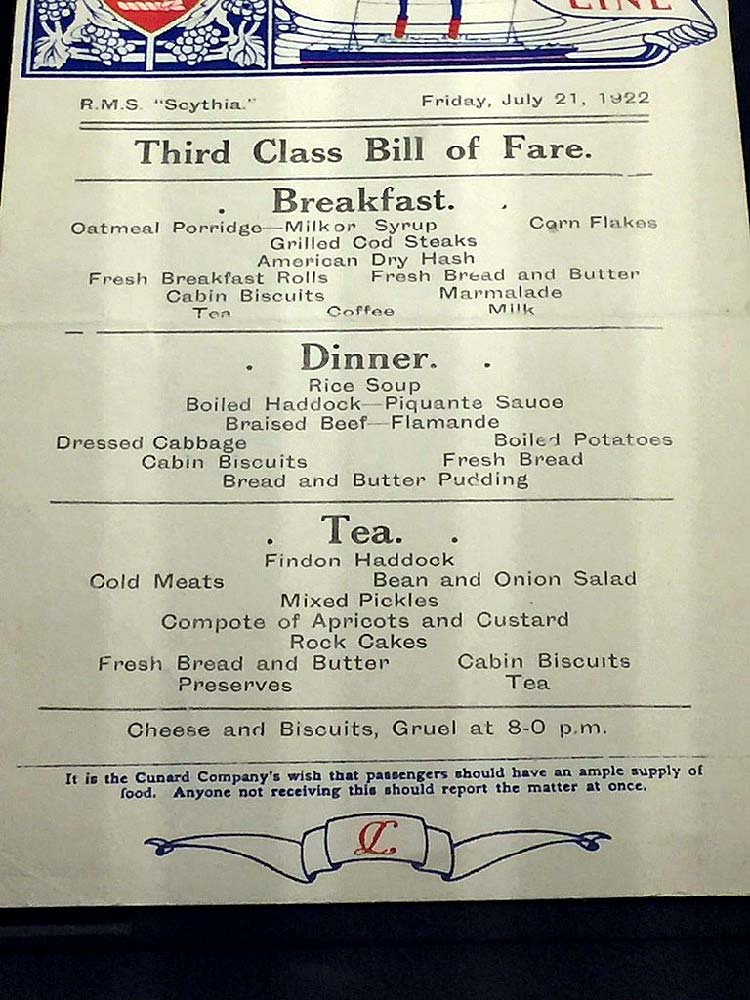 And note they wanted you to eat well even though you were confined to the lower decks. There’s a lot of fish on the menu!  Here’s a link to the recipe for cabin biscuits, which were provided to help queasy stomachs – no travel sickness pills, poor things!

Meanwhile on the upper decks the rich wore gowns like this one. 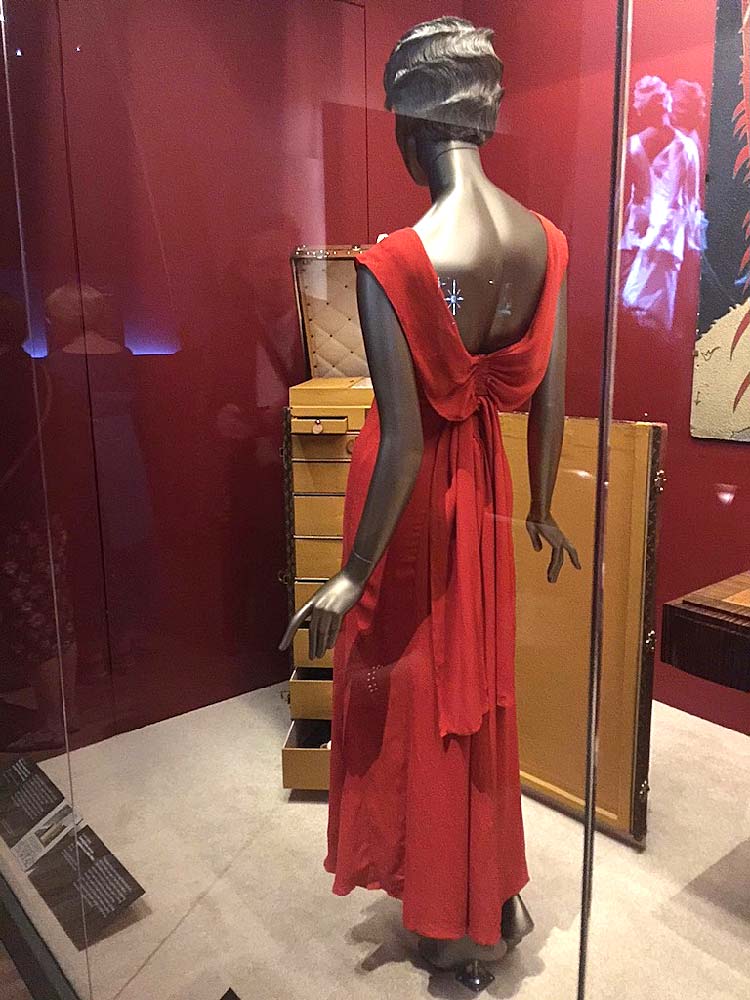 She’s standing by a trunk that you stand on its end and open to many drawers – useful, the card said, for all your gloves and jewellery! 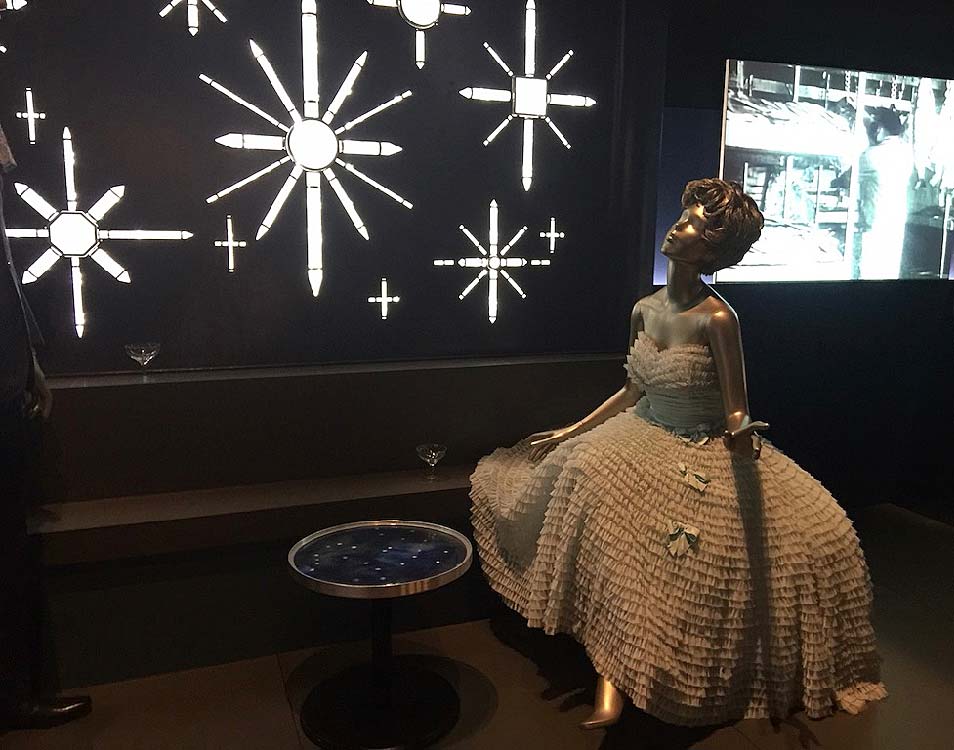 Another dress and below a tiara. 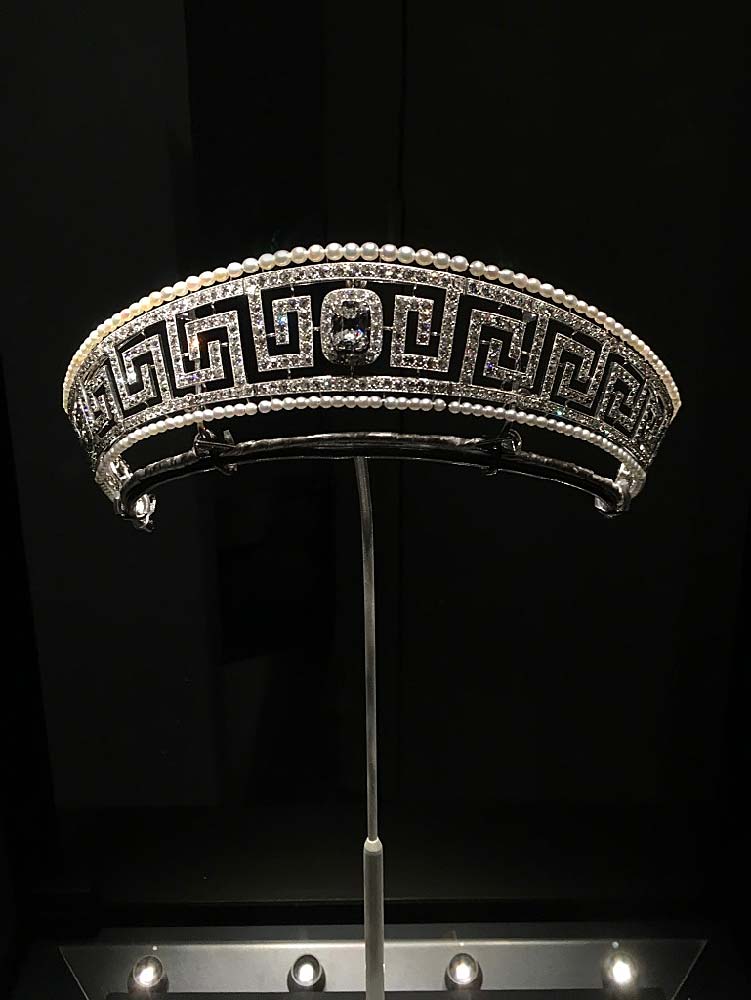 The living areas had the most amazing decor.  Here’s just one panel but there were many more on display. 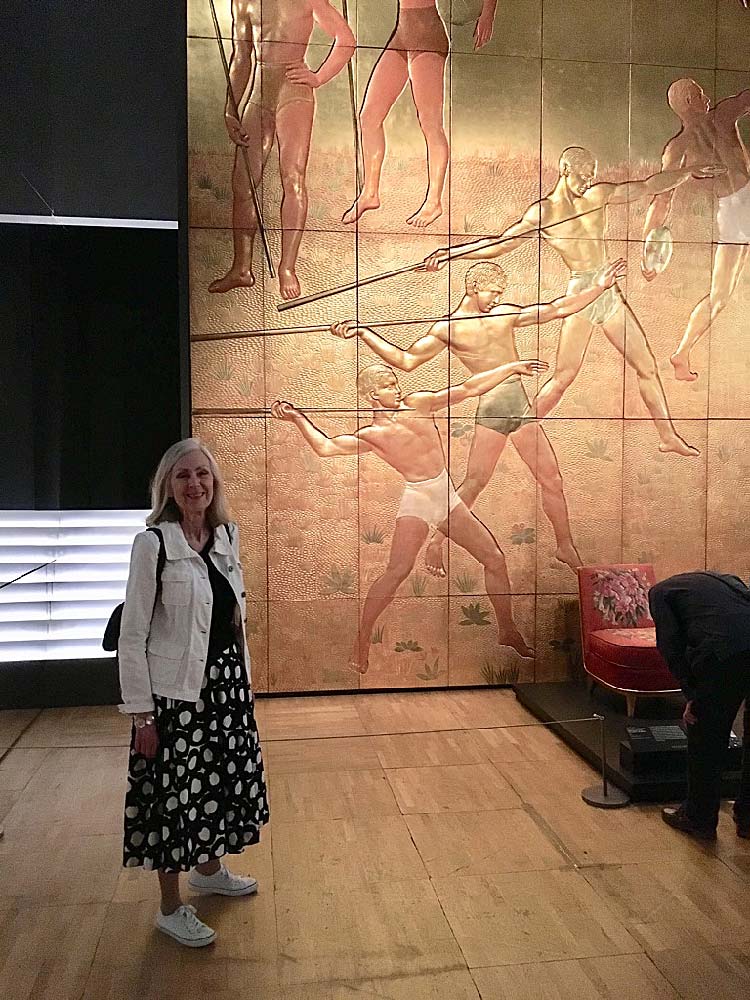 One pic I regret I didn’t take was of the largest piece picked up after the sinking of the Titanic, which was replicated in the film as the piece of flotsam that the character played by Kate Winslet clung to. (Actually somewhat smaller than the size in the film) It was eerily lit and I lingered a while thinking of that night which was probably why I didn’t take a photo.

There’s a great place to eat if you’re a V&A member, which I am, as it’s just the best place to go, I think, for fashion and popular culture as well as ancient antiques. 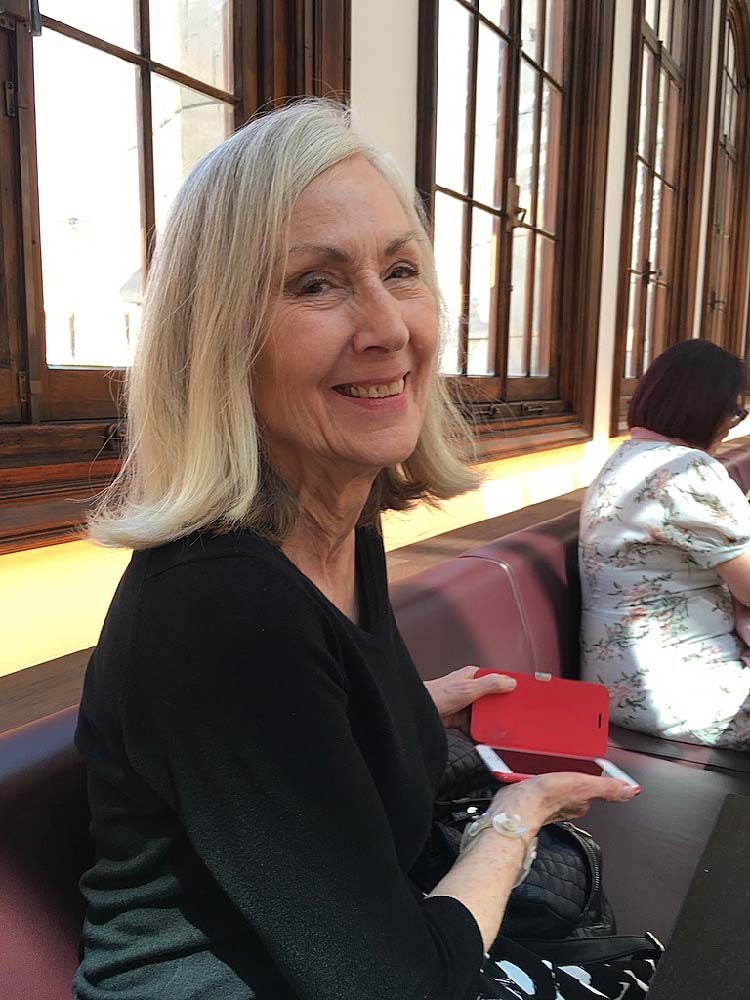 But we didn’t stop at just one exhibition. Mr Frugalfashionshopper wanted to see a room dedicated to 1930s graphic design and to get to it we walked for miles through 20th Century furniture and then costume and performance.  Here’s a couple of pics. 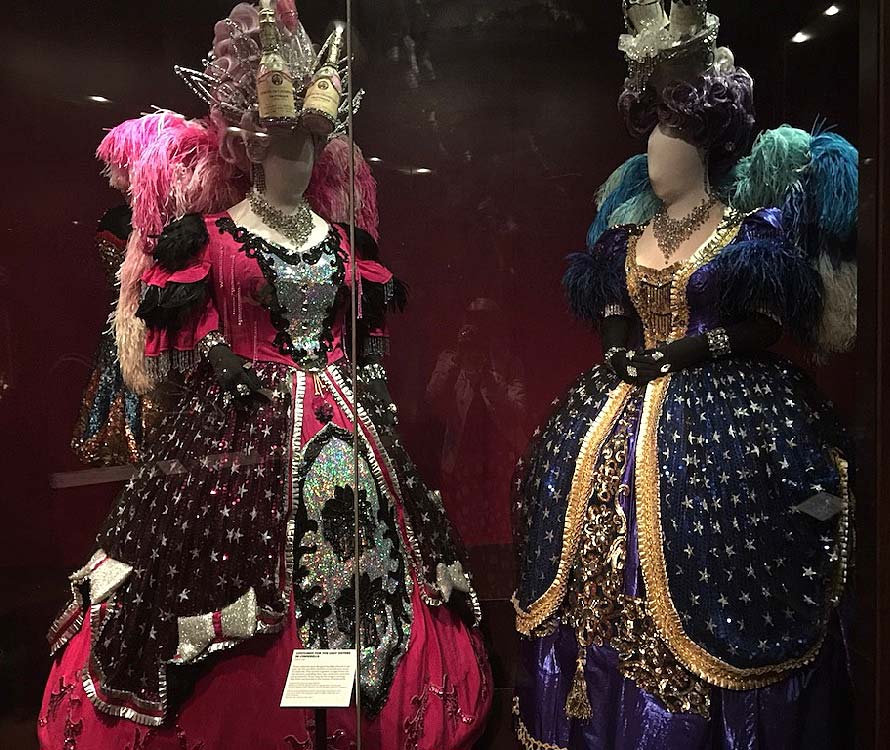 Those are costumes worn by two actors who played Cinderella’s Ugly Sisters for over 20 years. And this below, is a costume worn by the entertainer Danny Le Rue. 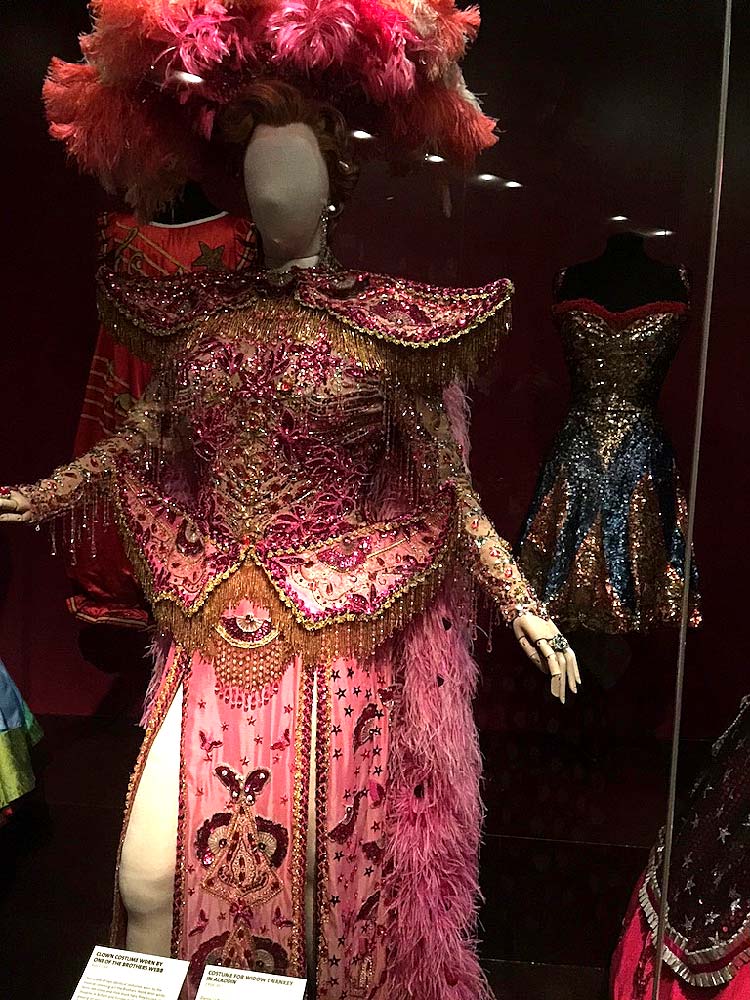 We ended up at an exhibition in great place downstairs called The Future Starts Here which was very much about this planet and its future. 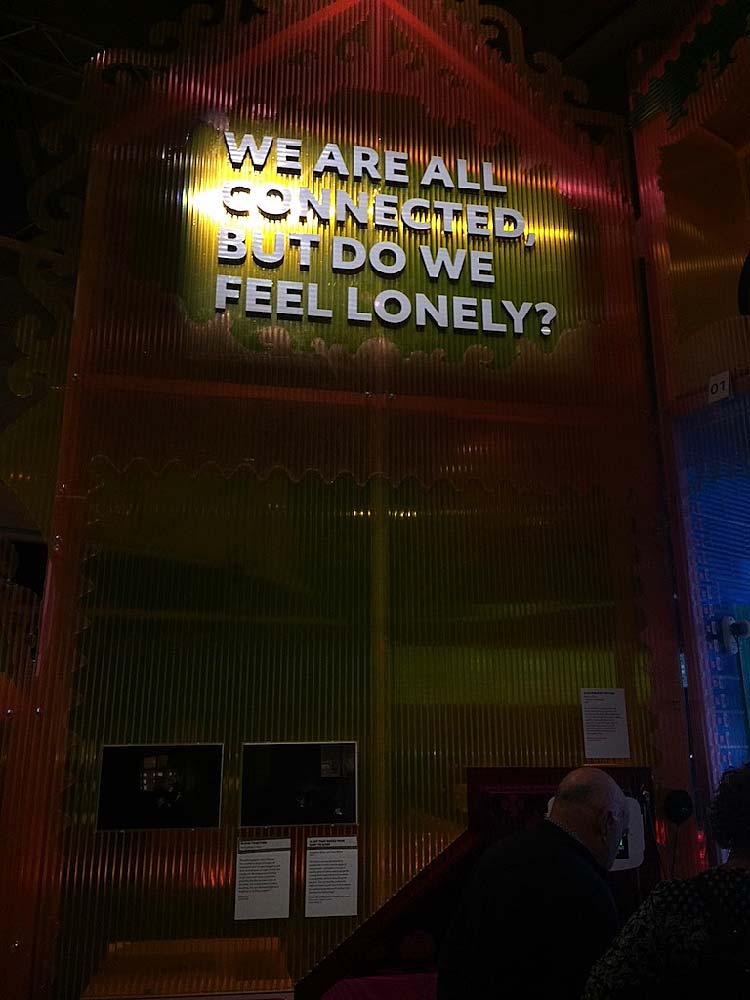 A good question? I think so. 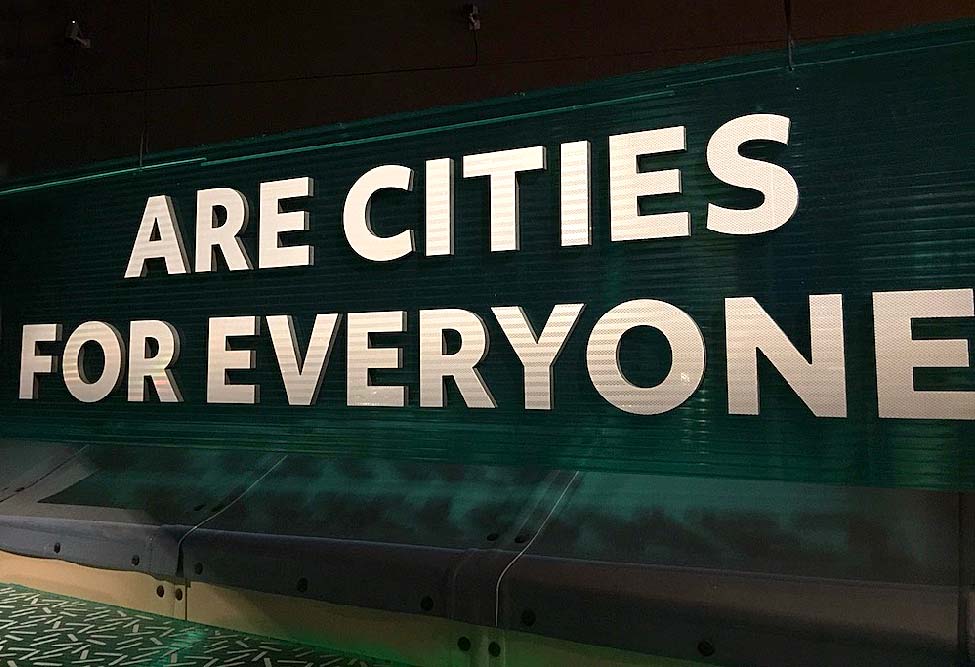 There was a lot to think about. But I paused at the Pussy Hat which has become a global symbol of female solidarity. 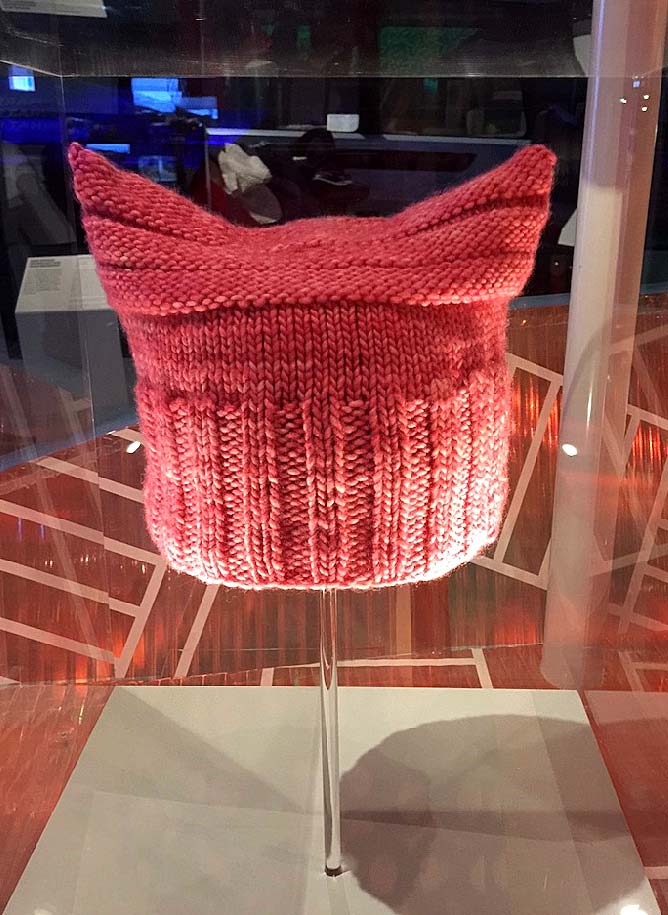 I think that would be quite easy to make so I might just knit one for next winter.  In the meantime – respect to all women out there working towards equality – we need that female power – go women, go!

Finally, I stopped and  got quite a lump in my throat when I saw that a 13-year-old Syrian refugee had reproduced his city of Aleppo in cardboard.  But not as it was, or is (it’s reduced to rubble) but as sustainable and green. 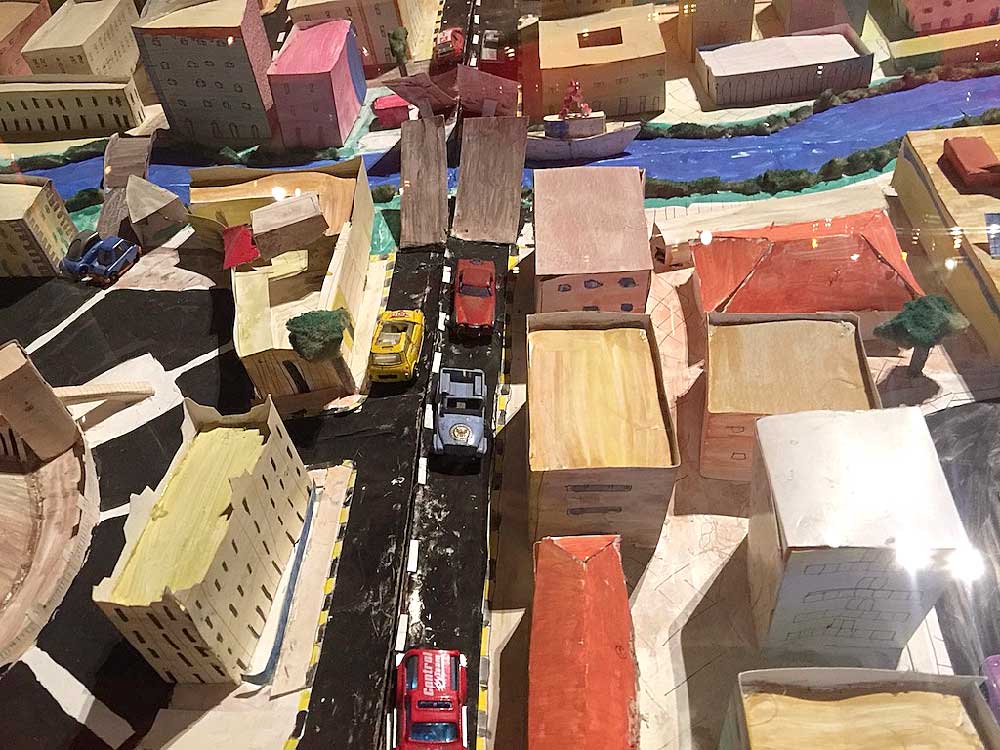 How wonderful and  humbling that this 13-year-old had the vision and foresight to think so positively about a future – that could happen. Well, one can always hope.

That was a day to remember, and it wasn’t finished as after a very necessary cup of tea and large slice of cake, we travelled by bus back to Victoria station.  And because it is the week of Chelsea Flower Show, many shops had decorated their fronts with displays of flowers. 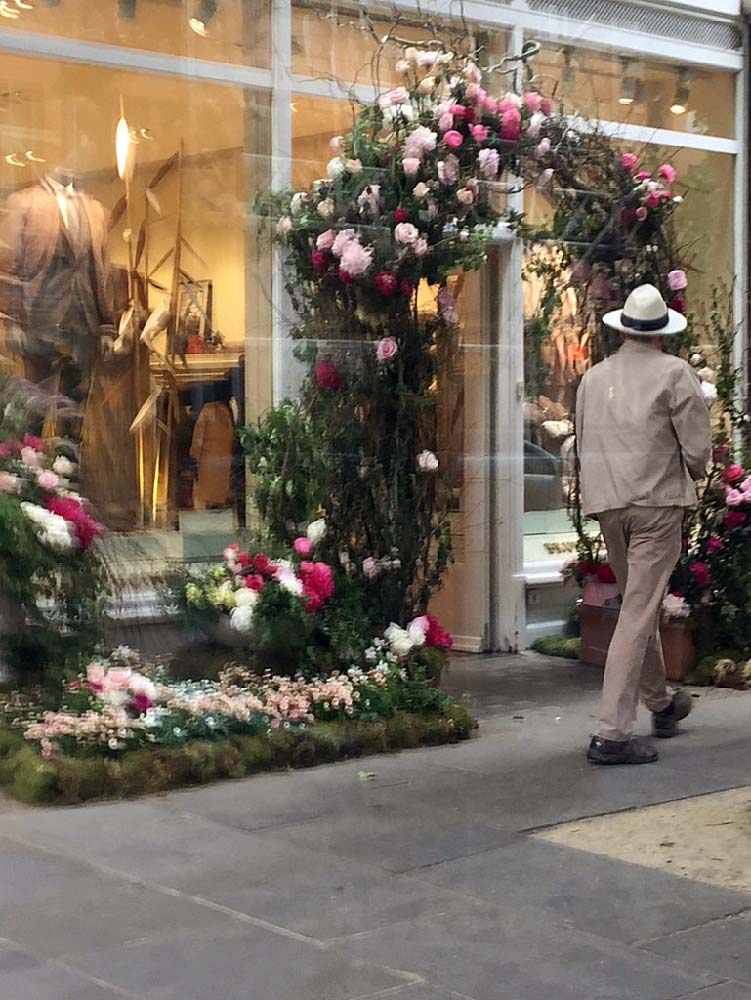 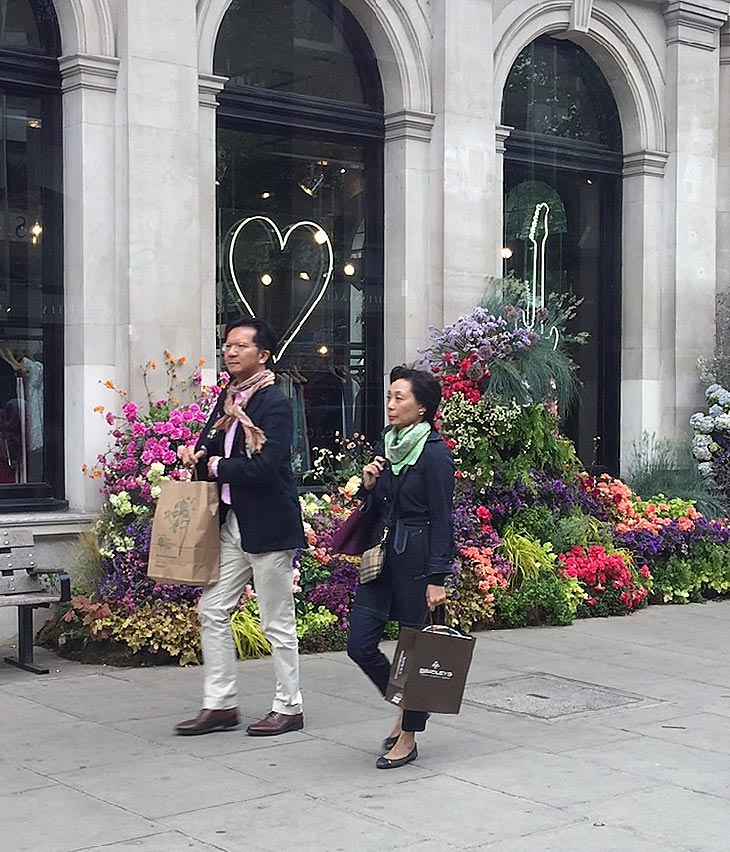 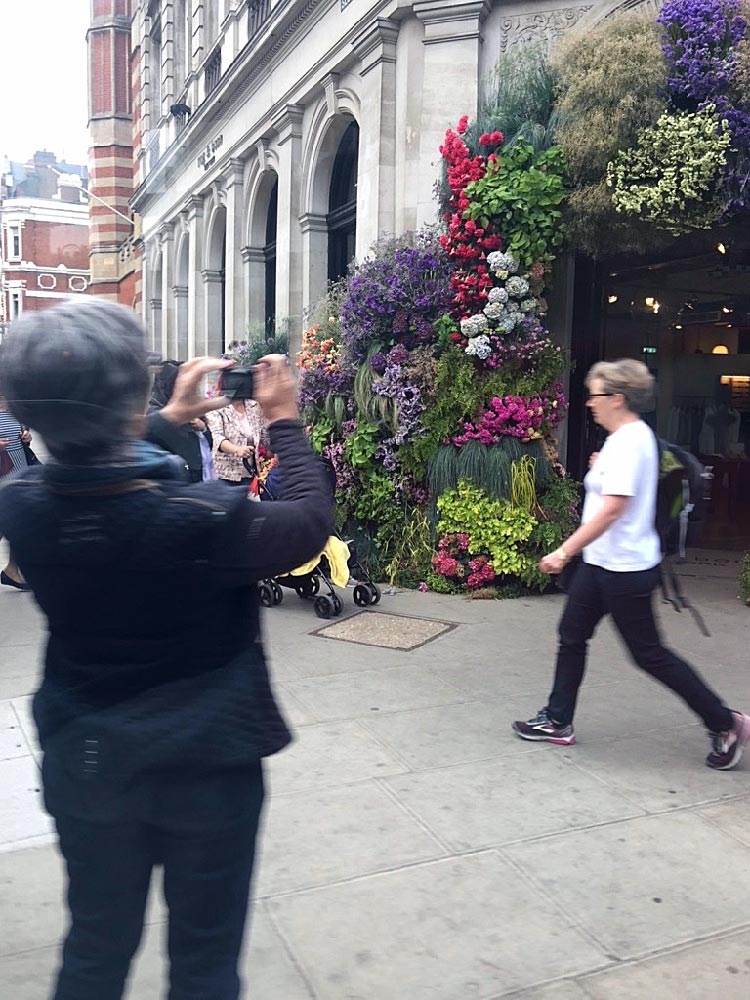 These were taken from the bus so apologies for the slight blurring.

Gosh we were tired when we got home, but it was a great day.  I hope you enjoyed it too!

That’s not all though, as I must tell you that this blog has a Privacy Policy, which you can find at the top of the page and here.   I urge you to have a look as I aim to be compliant with the GDPR that has come into being this day, the 25th May 2018.  We do our best to look after both you and your data!

That really is all