First of all, hello and a very big welcome to those of you’ve come over from the Look Fabulous Forever blog for a visit and decided to stay.  It’s great to meet you all and thank you for following!  Yes, Tricia Cusden asked me to contribute a piece I wrote last year on that tricky subject of unwanted hair.  Do go over to her site and have a look at that – and her make-up – which I highly recommend.

Well, I did say things would return to normal by the end of the week (after my rant about ageism and the shrinking state).  But instead of writing I went up to London to the lovely Victoria & Albert museum to see the totally amazing Pink Floyd exhibition: Their Mortal Remains. 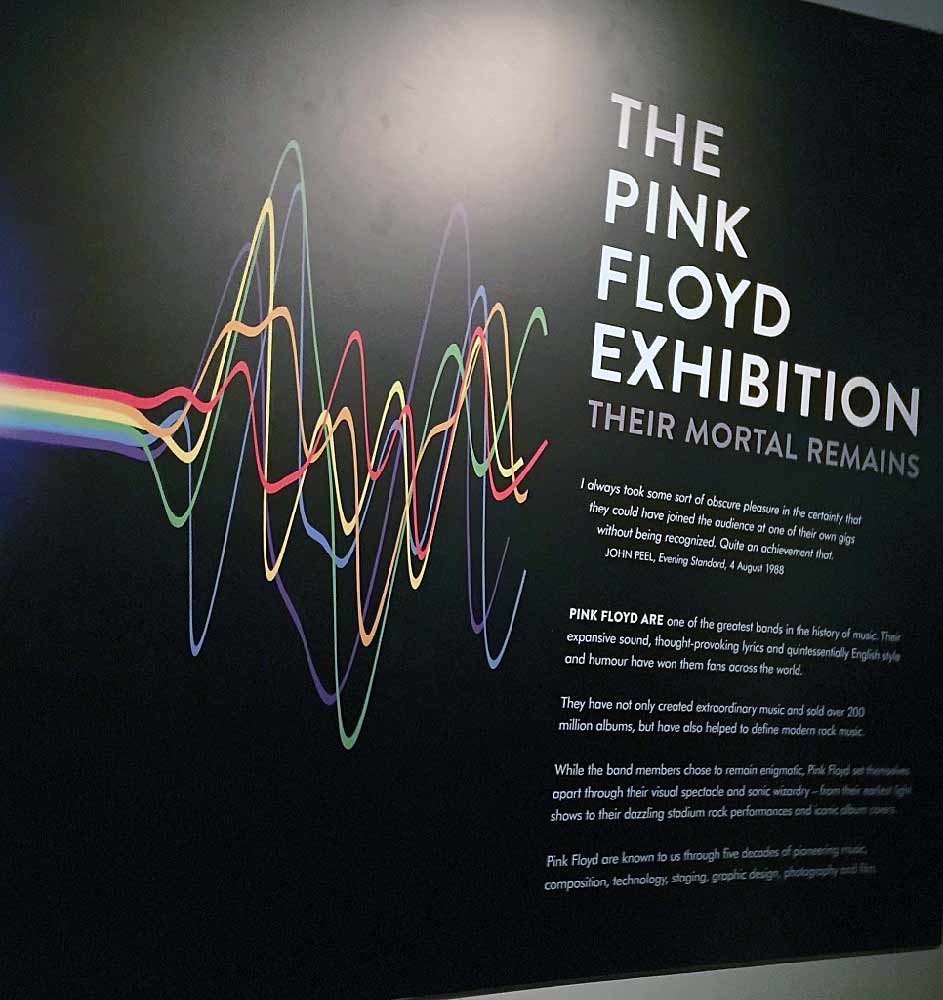 I take my hat off to the V&A as unlike a lot of museums (that can be rather precious and stuffy) it really does tap into popular culture.   The exhibition marks the 50th anniversary of the band’s first album, The Piper at the Gates of Dawn, and we were practically first in the queue.  This is inside the V&A and quite near the entrance to the exhibition, but when we arrived we’d found two huge queues snaking down the steps and around along the side of the building. Apparently there were far more people attempting to get in than they expected.  But, you know, it was well publicised. 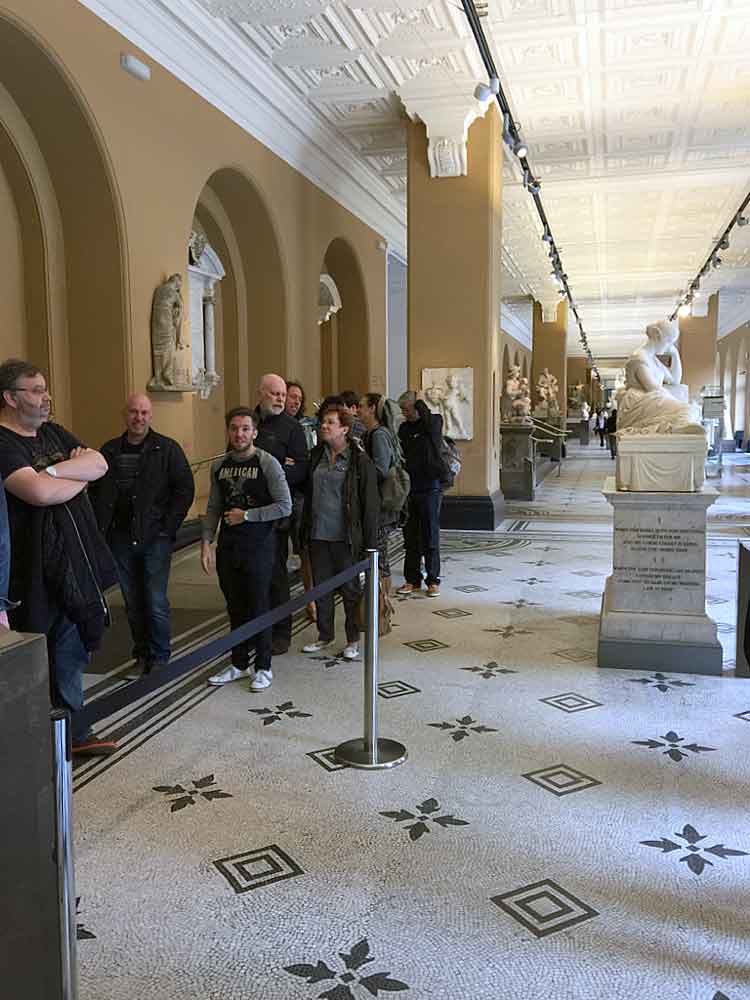 Note the grey hair and age of some of the people.  Yes, we were young once and into psychedelia in a big way!  Well, I was, anyway!

The whole experience was exquisitely immersive. I mean in my view, the V&A’s David Bowie exhibition reached heights that no other museum has exceeded.  But this exhibition was up there with the Bowie and I loved every single minute of it.  In fact both these exhibitions have spoilt my appreciation of traditional art exhibitions.  Because, as I go round what is often an expensive ticketed art exhibition, I find myself at the end of the 45 minutes or so thinking, is that it?  Well, just like the Bowie we were at the Pink Floyd exhibition for two and half hours, listening through headphones, experiencing the light displays and feeling the power of their music. 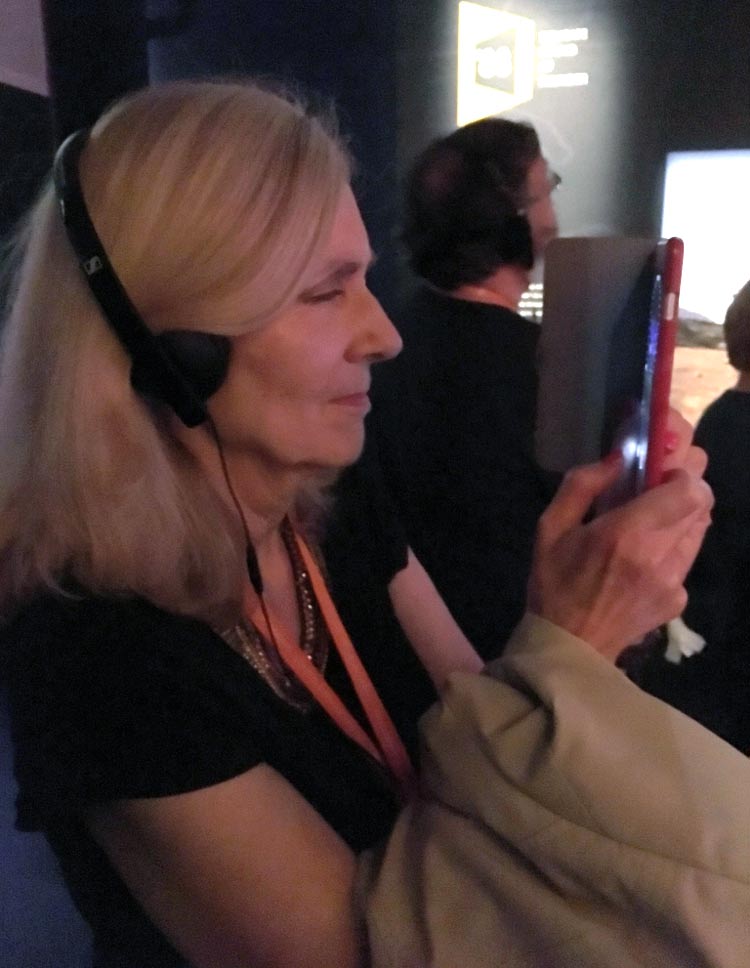 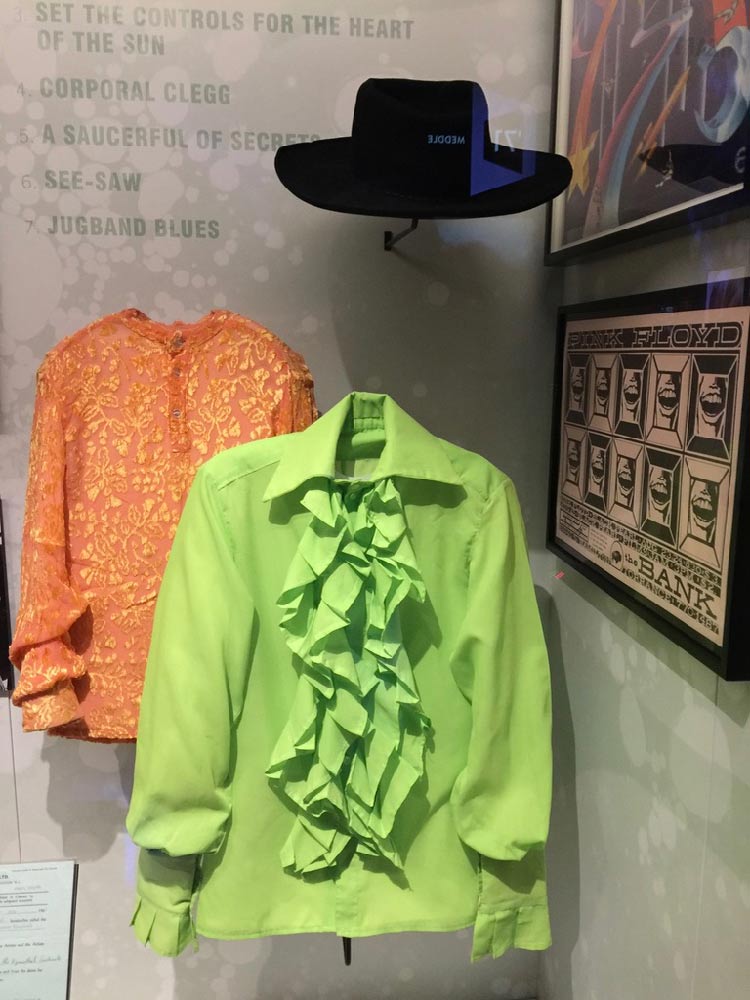 However, the thing about the Bowie exhibition was that his genius was spread over many genres, and I spent a lot of my time at that exhibition drooling over the costumes and clothes he designed.  This was the only cabinet that had any of Pink Floyd’s  clothes, but nevertheless, that’s mighty fine hat!

We probably made a mistake going to this on its first day of opening – it was very crowded and I got so hot!  Fortunately I wore layers, which were peeled off as I went round the exhibition. 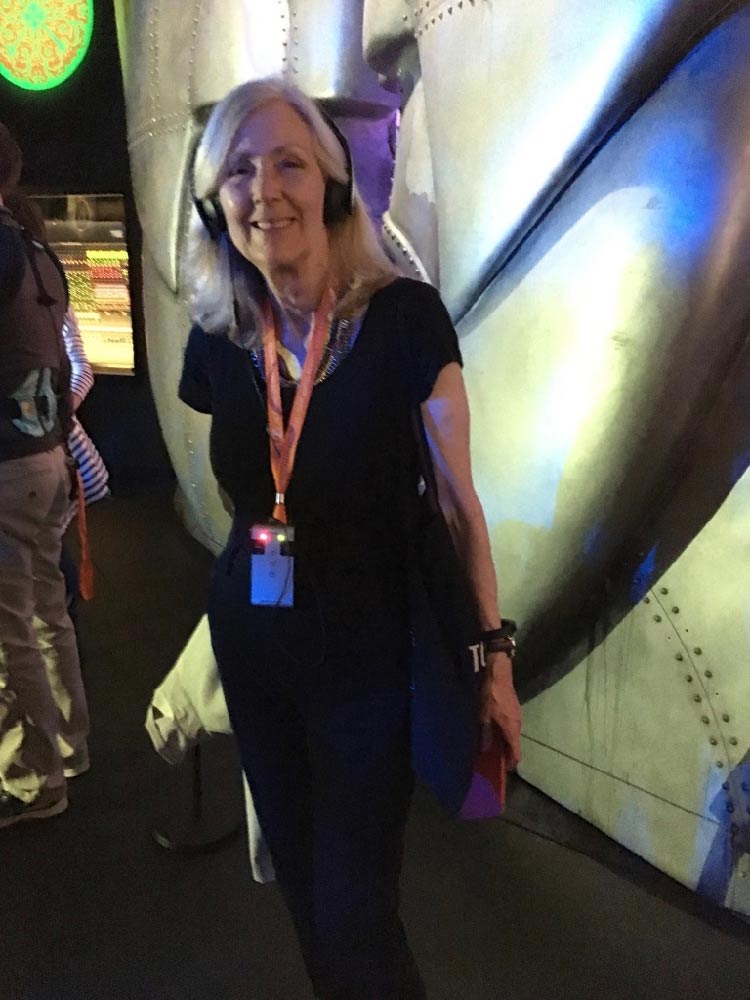 The day had begun with rain and I left my house with that new (charity shop) short trench coat, the white beret (also charity shop) and a scarf (not charity shop). The black trousers came from Peacocks, so cost not a lot, and those amazing and very comfortable flats came from my favourite shoe shop, Schuh!

After the exhibition we visited a furniture store; one that had neat, retro furniture that will look great in our new abode, which is tiny.  Here’s me trying one of their pieces out. 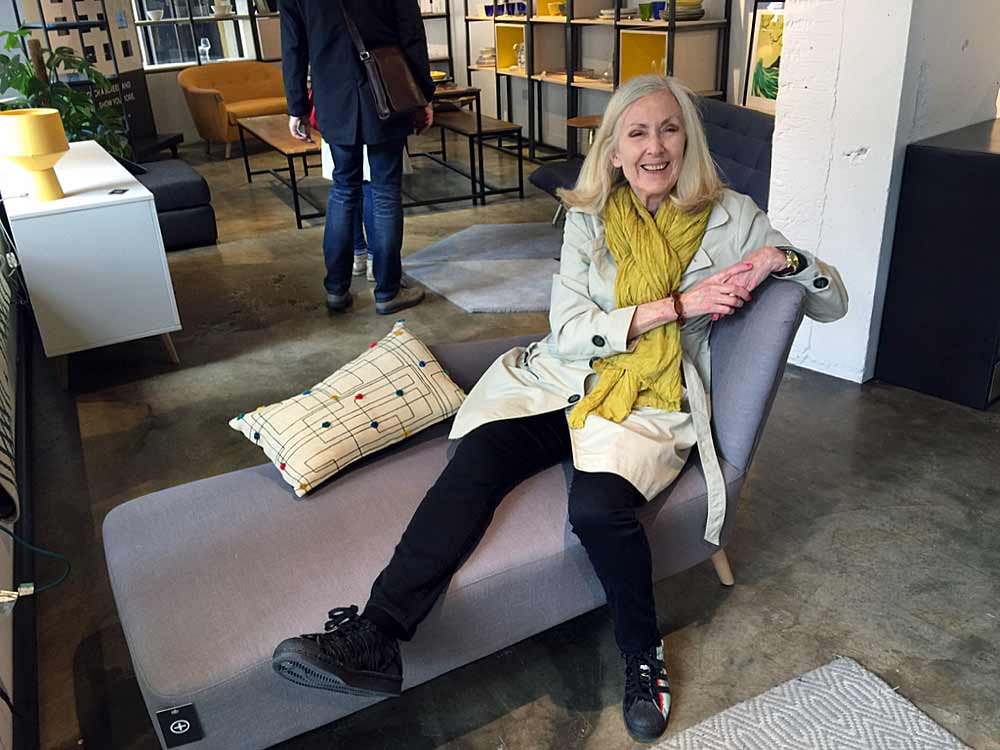 That’s all for now, but do tell me your fave band from the past.

P.S. A big thank you also to those of you who popped over to My Other Blog.  It really does need an up-date, and is my next priority.  I have two posts buzzing around in my head.  One will be on the coming election, and another longer one will be on the death of civil society, which will encompass more of Polly Toynbee’s talk, plus other stuff I have been reading up on over the past few weeks.  The election piece will be posted shortly, the one on the shrinking state will take longer.

Catherine of Not Dressed as Lamb and her weekly iwillwearwhatilike session