Well, I think I’ve got Norway and the upper reaches of the Arctic Circle out of my system.  Norway is a wonderful country and very beautiful, but parts of it were so cold!  And it’s not that I’m saying I won’t visit it again, but I think I’ll give that area of the world a miss over the next five years or so.

Anyway, have you noticed that I’ve mentioned the Caribbean a couple of times? Yes, I’ve booked to go on a cruise in that area in January.  Don’t judge.  I booked that whilst recovering from one of those winter viruses when feeling quite physically low.  And I’m getting quite excited as I’m going round the sales picking (cotton) items to wear.  But I’m also a bit anxious.  Because I just don’t expose my body, or hardly ever, partly due to my fearing the sun for its cancer-producing rays but also, people, I don’t like my tummy, belly area.

And this is mainly because both my babes were big with the second one coming in at just over 10lbs (a very easy birth, btw).  But oh my, did I get a load of stretch marks, which I can see to this day decades later.  That area never recovered. So I’ve always covered it up and hardly ever wear bikinis.  I usually buy those ones that have material to pull down over that tum area.  And I haven’t swum on a holiday for simply years, mainly because most of my holidays have been taken wearing this kind of thing! 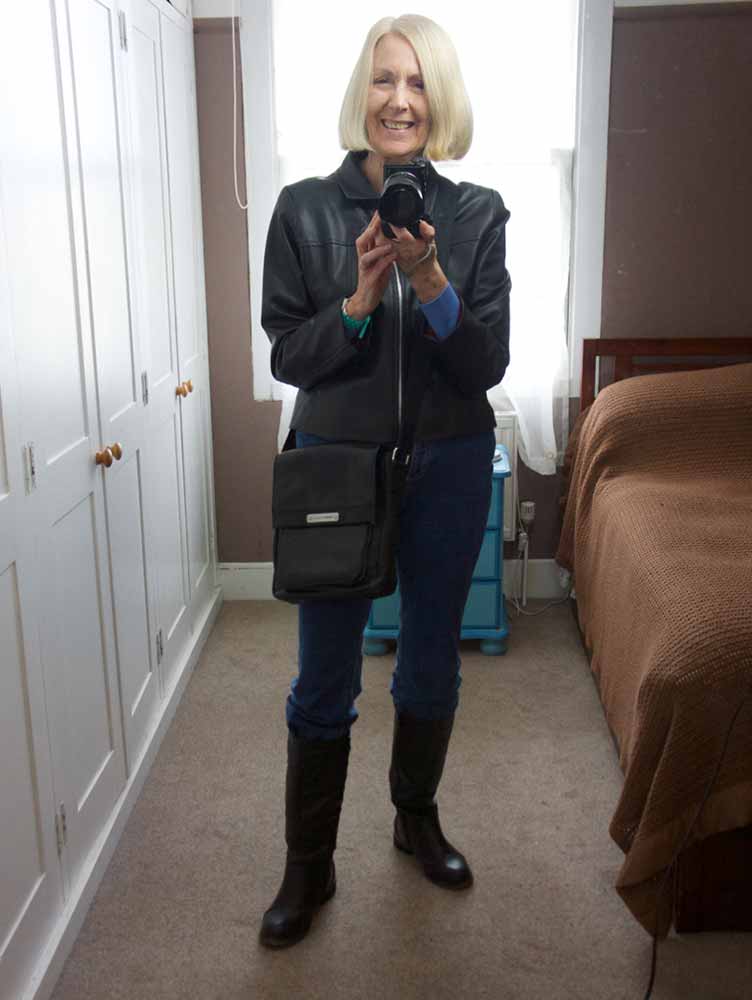 Yes, that’s me kitted up in boots and my faux leather jacket.  And on my head I’d be wearing not a sun-hat but a scarf to keep the wind out of my ears. 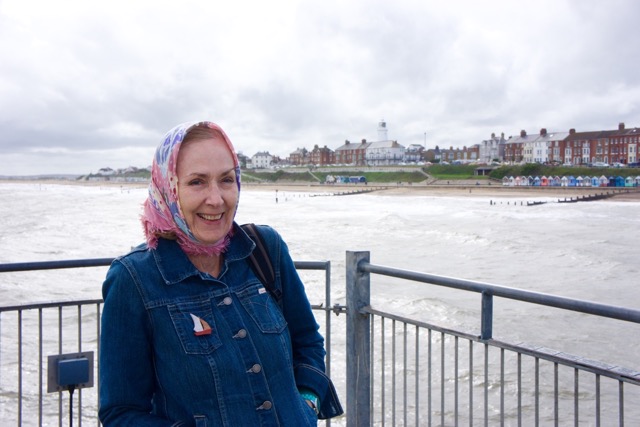 That’s a bracing English sea breeze I’m in, which was really more like a gale.

And here’s the bracing sea itself! 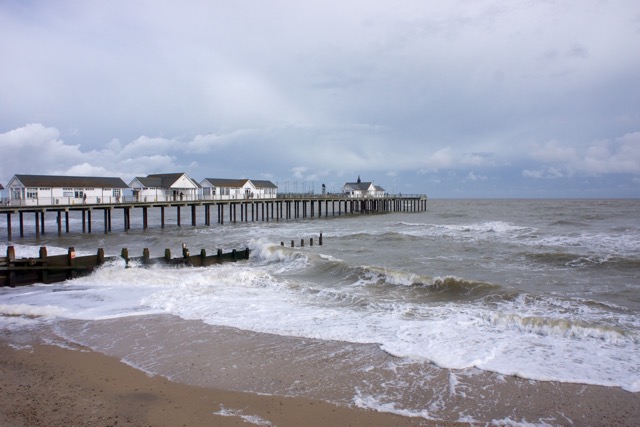 Also, as an aside I don’t like swimming for reasons of i) My hair – I don’t want either salt water or chlorine to damage said hair (that might change as I slowly go my natural white colour) and ii) I‘ve got very poor eyesight and wear contact lenses to be able to see, and then glasses on top of those for reading.  To swim I’d have to take those contact lenses out and wear bottle-top glasses, which I totally hate.  Anyway, I knew I had one of those tummy hiding bikinis somewhere.  I went searching for it the other day and found it.  Reader, it was mouldy!  It went straight into the bin.

OK, off I went to find something to swim in and I’ve bought a lovely bikini, but you’re not seeing it yet because, gosh that belly of mine needs some work on it before the holiday!

I do hate being so body self-conscious, but I am also saying to myself, this is ridiculous, and anyway, never say never.  So, my goal is to be able to wear a bikini with something approaching confidence with a passable tum that’s not too flabby. And that’s a great goal to have at the age of 70!

I so completely understand this business about women wanting to cover up on a beach, consequently I have been simply, totally, and utterly appalled at the French ban on burkinis.  (Apparently, there will be a high court ruling on this today so it may continue and it may not.*) My view is: excuse me?  What!  I mean you are going to force women to undress?  Are you mad?  And I understand that France is a secular country, I agree with that, and might write about this one day on My Other Blog, but have you gone insane?   In the interests of Liberty, Equality and Fraternity are you are asking French nuns to remove their black frocks?  You’re not?  Oh, it’s about Muslim dress.  And, that’s Ok then?  No, it’s not.  Awful, simply awful. France, you are better than this.

And I’m not getting into any debate about why Muslim women would want to wear a burkini (invented by an Australian Muslim women, btw), because it really is not my place to do that.  But France, you can’t put a layer of oppression over and above a woman’s reason for wearing said garment.  Why?  Because women should wear what they damn well please.  We’ve got enough to worry about without French policemen patrolling a beach demanding that women take their clothes off.  Leave those women who want to cover up on the beach alone, ffs.  End of rant.

Actually, I have begun the quest for a less wobbly belly. As well as the mat exercises I do at home, and the walks prompted by my fitbit, I’m going to start a class in Brighton.  And then there’s the condition of my skin, especially on my torso, where I have those old lady scabby things (sigh).  You see, my fears are real, people.  OK, to counter these things (seborrheic keratoses if you want any more information) I had a body scrub two days ago – oh wow.  Made up from salt, sugar and oil (and not those granules that are doing such harm to our environment) it was just wonderful. And I’ve booked my first spray tan next week. Yoo hoo, I’m really going for it!

*I understand that the court has ruled that in one town on the south coast of France the ban is suspended as unlawful, which will act as a precedent, but the articles I’m reading seem to say that the debate on whether burkinis should or should not be worn on beaches has not gone away and is still rumbling on.

10 thoughts on “On bikinis, burkinis and body scrubs”