As you know, I love a pop of colour and especially a particular shade of yellow.  And it’s not a pale lemon yellow either.  No, what I love is that in-your-face yellow. The kind that knocks you out and makes you go, wow!

In fact, I love the colour so much we’ve painted one wall of our sitting-room in a mix of yellow called, ironically, Bonjour! 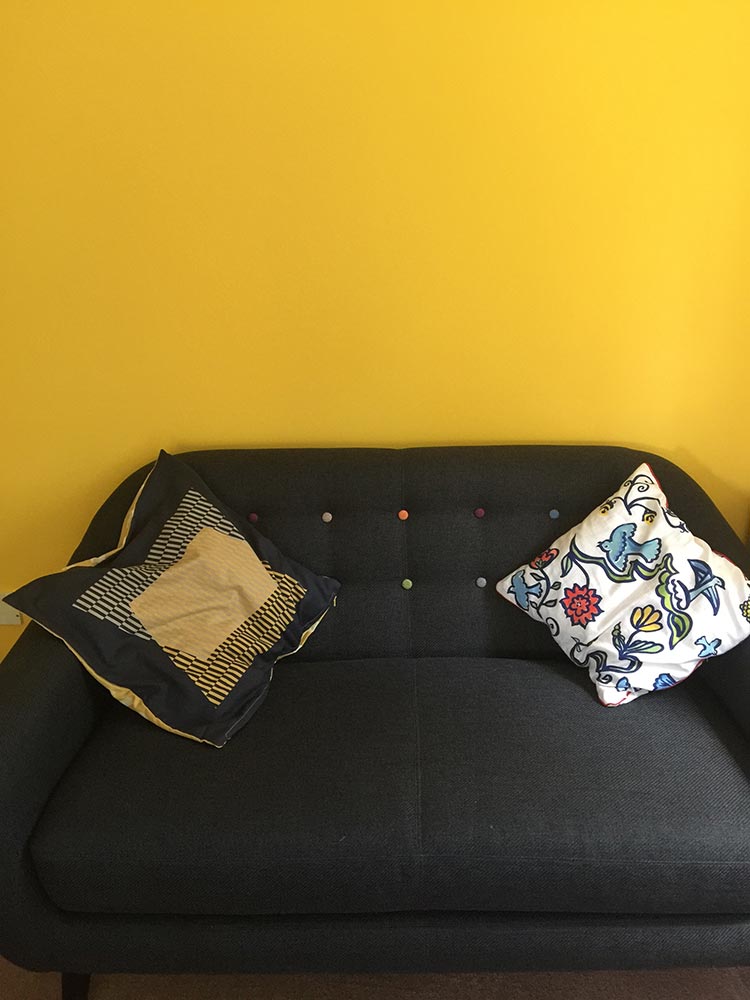 I say ironically, as we were inspired to do this after visiting our friend’s flat in Toulouse and seeing one of his rooms painted in a striking yellow.  We just went yessss, and knew that we simply had to have that colour in our flat. Btw, in case you think we’ve become somewhat minimalist in our decor (as in, nothing on the wall) there will be things on the wall, but we’ll have to be so careful as to what and where, as that wall is solid and an absolute menace to drill into.

The cushion on the left is from Ikea, and the one on the right is made from a hand-painted material by an artisan in Wales, and the settee is from Made.com

Yes, my head always turns if I see that colour.  A couple of months ago whilst on the bus into Brighton, I happened to see a yellow coat in the window of a (Cat’s Protection League) charity shop.  It was there when I came back on the bus. I did that again, and then again. Two weeks later it was still there. So, thinking to myself, why am I passing this opportunity up, I got off the bus, walked back, tried it on and bought it on the spot! And here it is.

At £6.99 don’t you think that, not only is this a great bargain, it’s a knockout coat. It’s made from a kind of a felt material and has a French label that I don’t recognise. 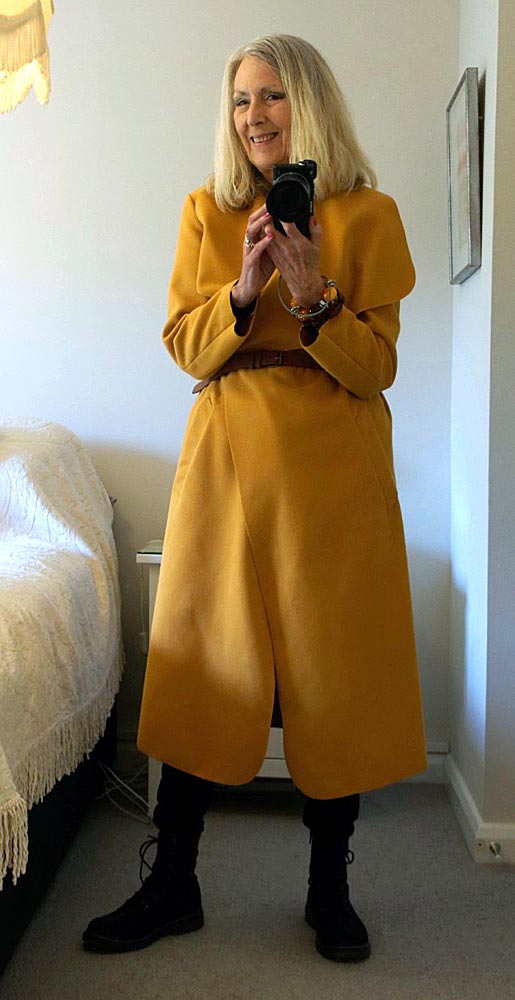 And here it is with a belt – also bought at the same charity shop.

Apparently a lot of people had tried it on, but felt they couldn’t risk buying it because of the colour.  It’s the colour that sold it to me!

So, don’t entirely ditch the black. I’ve got my fair share of black clothes (I have a black coat and a grey coat, and here I’m wearing black jeans) but I strongly believe that as we age we should break out from the neutral and bland and wear more colourful clothes.  I mean on the bus I see a lot of beige and pale coloured three-quarter length coats. Noooo, I say to myself. Be noticed and be out there in a bright colourful outfit. And in the UK with our grey skies, we need that colour. But, am I wrong? Because I also believe that older women should wear what they damn well like. On the other hand, I also want older women to wear clothes that people notice – don’t fade away, is what I think. But what do you think?

61 thoughts on “My love for a certain colour – yellow!”