Just look what I found in a nearby shop yesterday – a spider brooch which I shall wear and wear, I promise. 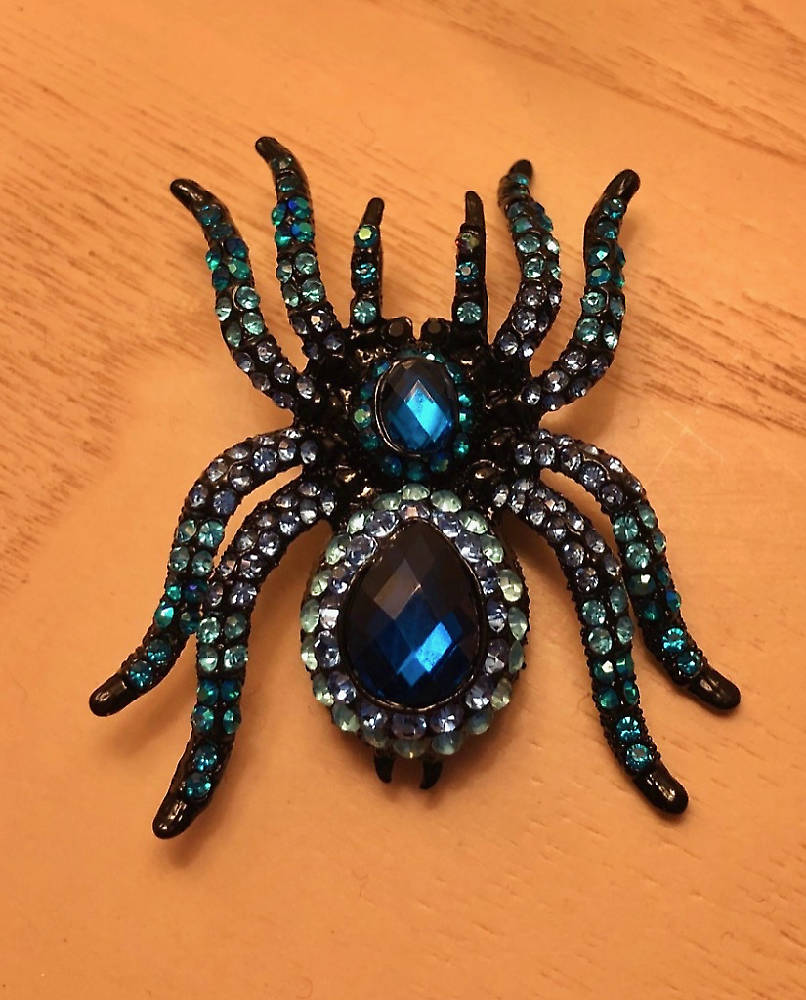 I’ve just bought it so no pix of me wearing it yet but here it is by my newly painted nails to get the size. As you know I’m a great admirer of Lady Hale and her collection of brooches, so, while I love necklaces and bracelets and have quite a collection, I’m now going to look in charity shops for outlandish and stunning brooches. The spider brooch, btw, was bought in a quirky shop in Kemptown, which hasn’t got a website but when it does, I’ll let you know. 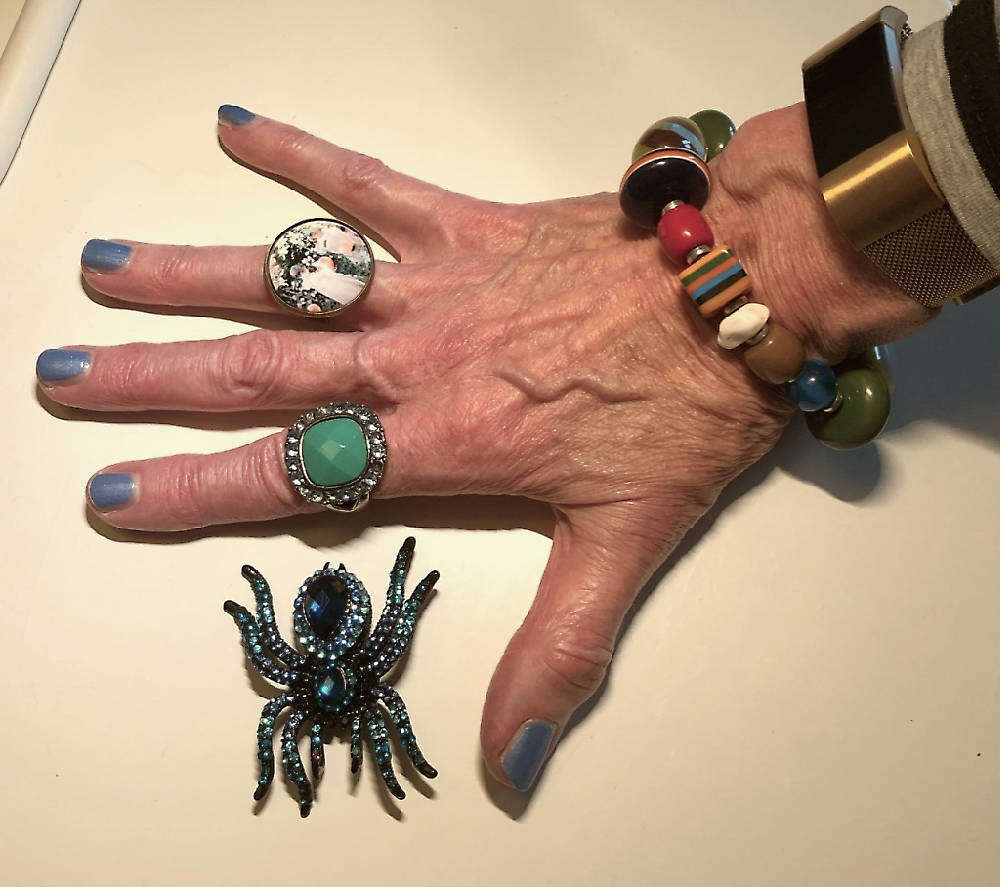 And how is the change of season treating you?  I have to admit I’m still not 100% and have had and still have some minor ailments including a virus I can’t seem to shake, but cup half full, all of this I’ll get over. It’s annoying but the change of season has hit a lot of people of all ages. Anyway, I’m making some chicken soup tonight and hunkering down to watch some telly 🙂

Someone asked me to style that favourite skirt of mine, so here goes. Took the pix on a good day, btw! 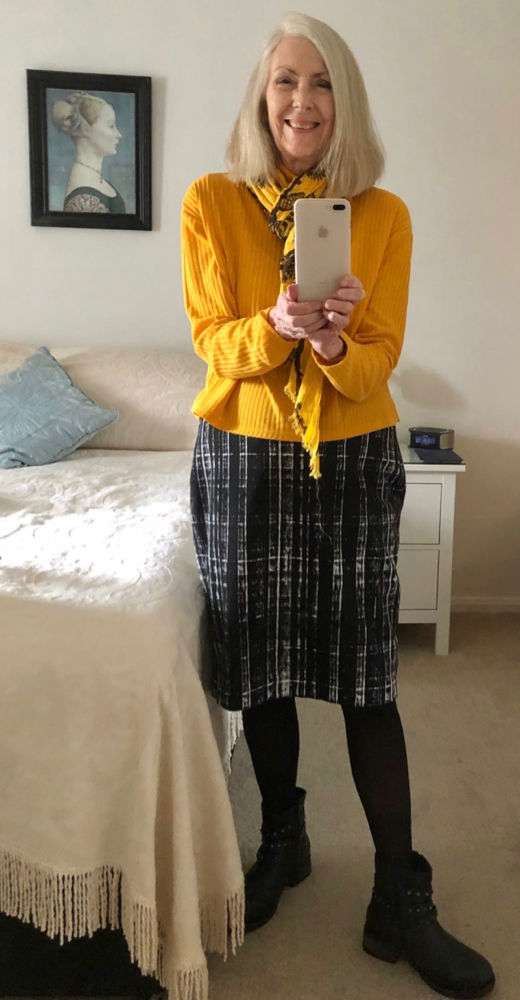 So the charity shop skirt is topped with a yellow polo-neck (H&M and under a tenner) plus a yellow scarf from the V&A museum, which was, I think, about the same price as the studded boots (£30). Note I do acknowledge that the skirt is slightly too big for me.

Then there’s a charity shop black corduroy jacket, which has an M&S label and cost £10.

The days are getting cooler so this smurf-like wool beret is a hat I’ve been reaching for quite a lot lately. And finally…

I don’t have a thing about hand-bags, never have, as coats and jackets are my downfall. But I used to wear a shoulder-bag on the left shoulder and am sure that’s had quite an impact on my spine. So now I always wear a backpack. This yellow one was bought new at over £40 last year, but ever since I’ve worn it almost every single day. Hmm, might have to look for another as it’s beginning to be a bit grubby, but gosh, I might just get the same make and type – and colour! Or I could wash it. It’s so comfortable and all the weight is balanced.

That’s it about clothes. I’ve noticed that some bloggers set out what they’re watching and reading. Would you like me to do that?  I have some niche tastes though 🙂  What do you think? I’ll start with what I’m watching, which might give you a sense of my taste.

Anyway, just finished watching The Sopranos for the first time. If you don’t like violence then avoid, yet of course, this is about much more than that. It’s about family and Tony’s sense of guilt and well, it’s a whole universe. I am bereft.

However, maybe watching the Season 7 of Spiral will make up for some of my feelings of loss. This is a gritty French television series looking at the lives of Parisian police and their colleagues in the legal profession, which I find fascinating not only because of the fully-rounded characters within it, but also I love the spotlight on the French legal procedures after a crime – so very different from the UK system. Note the term ‘gritty’. Don’t watch if you don’t like violence, but as with The Sopranos, really it’s far more than the sum of the crimes, which are, I think, merely a platform for the story arc and character development.

As soon as it was available (last Friday) we watched El Camino. The Netflix follow-up to Breaking Bad. I enjoyed it but it was obviously not as good as Breaking Bad, which had the best story arc I’ve ever seen on television, bar none, in Walter White’s character development. The Breaking Bad series confirmed to me that although I love film it can never reach the heights that television can reach through the slow and steady elaboration of a character’s story over several series.  But whatever happened to Jesse Pinkman? Well watch El Camino to find out.  Don’t watch if….

By now you’ve gathered that I don’t like dressy-up series based on the antics of aristocrats. Nope, not my thing. But I haven’t watched Peaky Blinders – somehow missed it. Should I watch it?  Let me know.

That’s all for now. Keep well and warm  🙂

44 thoughts on “My latest find – and it’s something spidery that sparkles! Plus another view of my favourite skirt and what I’ve been watching!”