I’m back from our holiday in Dungeness, which is an amazing and very unique place and I’ve decided that this is not going to be anything to do with fashion, instead the post will be a showcase for this very unusual spot.

As I said in my last post Dungeness is a headland made up mainly of shingle, and you might expect from this description that housing would not feature in such an environment, rather that it would be preserved in its natural state to allow the vegetation and wildlife that is present to live and thrive. Well, the vegetation and wildlife is protected and the whole area is considered hugely important but there is housing of a very particular kind. Many of the single-storey houses were once fisherman’s wooden weather-boarded shacks. Then there are others that are made from old railway carriages and most of these came about through the ‘shack and track development’ that began after the First World War.

I remember studying this kind of development for a course I took at Brighton uni. In that course I studied the early days of a nearby town, Peacehaven, but the whole area of Romney Bay was also very much caught up in this innovative and creative housing development where people bought plots of land and built housing from scratch with little or no amenities. I rather admire that type of pioneer spirit and enthusiasm which now is virtually impossible to replicate what with all the rules and regulations that exist before one builds a house. Anyway while it is quite hard to find any original ‘shack’ dwellings in Peacehaven, Dungeness has many examples of this type of housing which I will be showing you in a couple of the photos below.

Here’s the cottage which is called Wi Wurri – rather appropriate I’d say! 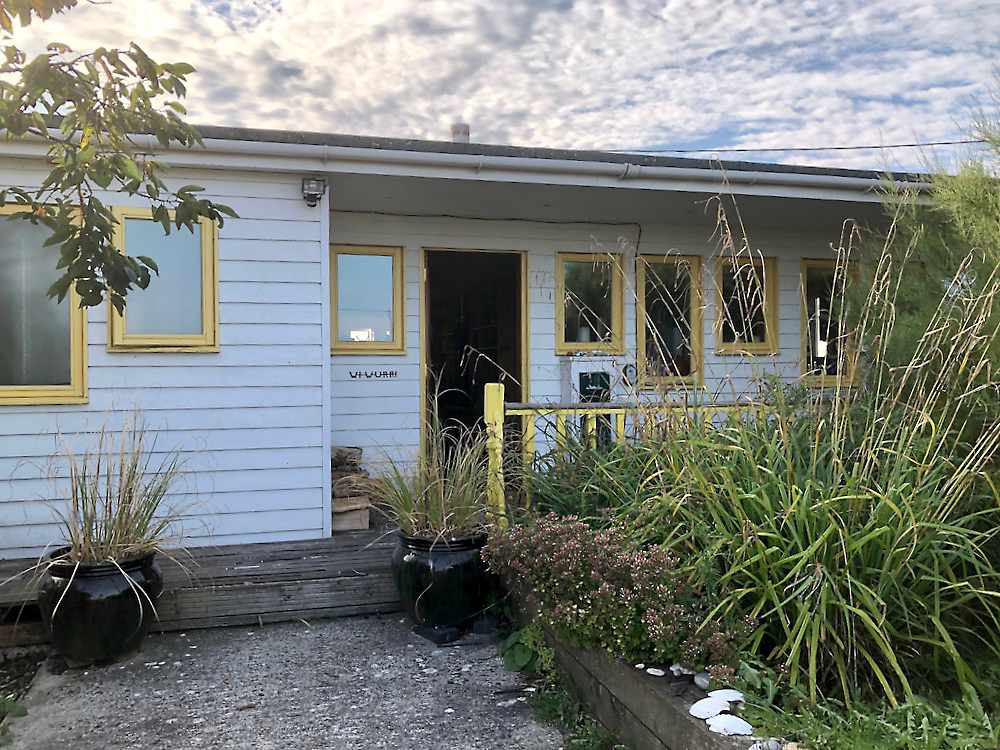 It is actually much bigger than it looks from this photo and is in fact rather like a Tardis. 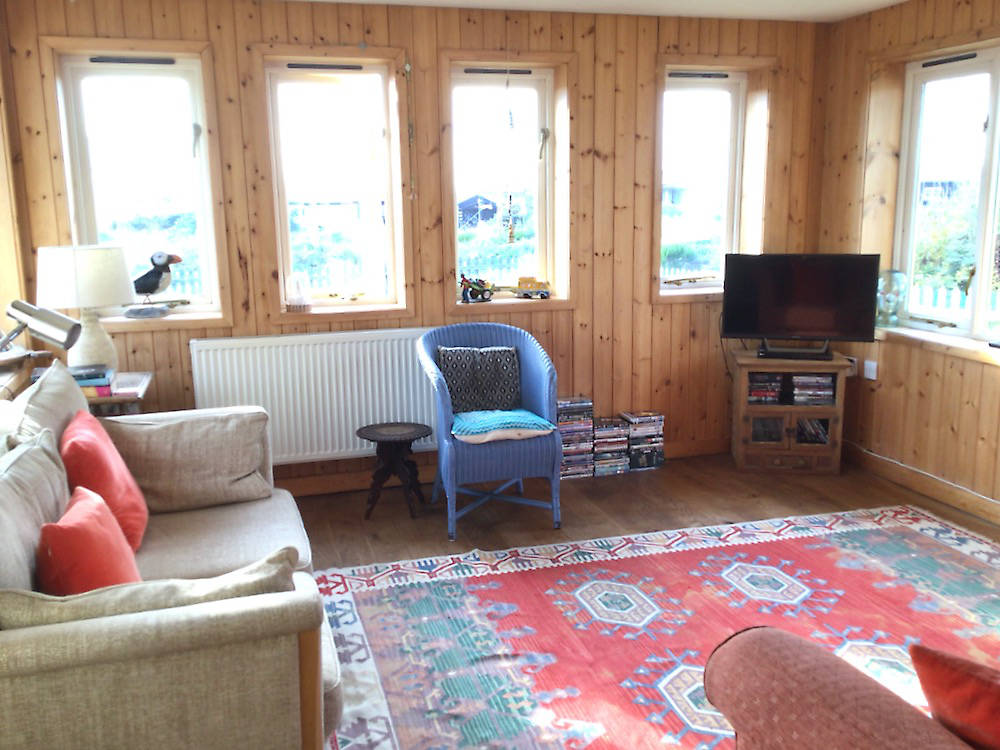 See that television – we didn’t watch one minute of television the entire week, which for a telly-addict like me is saying something. Instead the cottage is full of books and I looked at many and read several. Also in the evening we put on some music and sat around the kitchen table and talked and talked – it was so lovely.

Yes, there was endless opportunity for talking as we also had staying with us my son Peter, his partner Marion and baby Oscar! 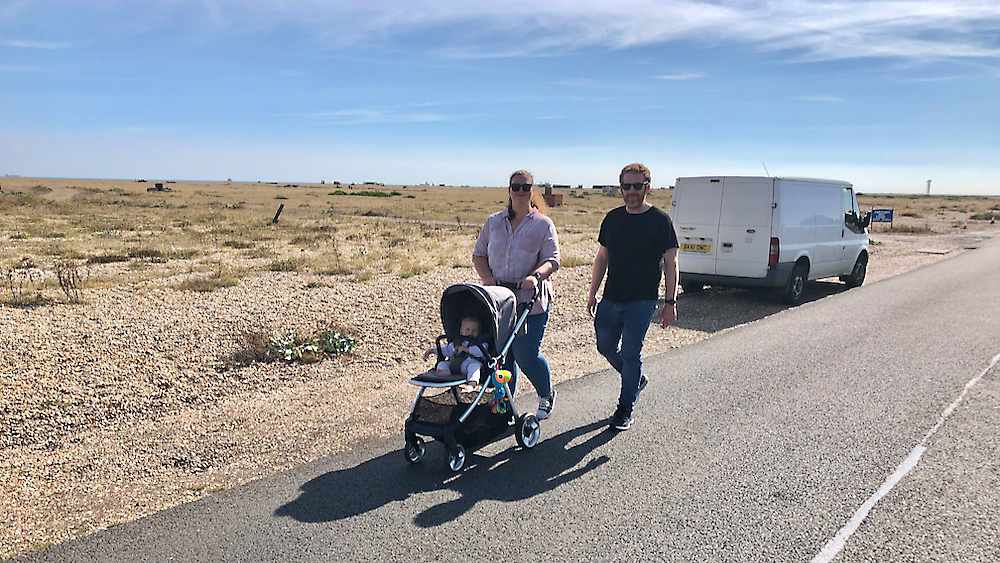 Here in the ‘snug’ you can see some of the books that surrounded us giving the cottage such a special and distinct character. Mr F looks really comfortable – it was my favourite chair! 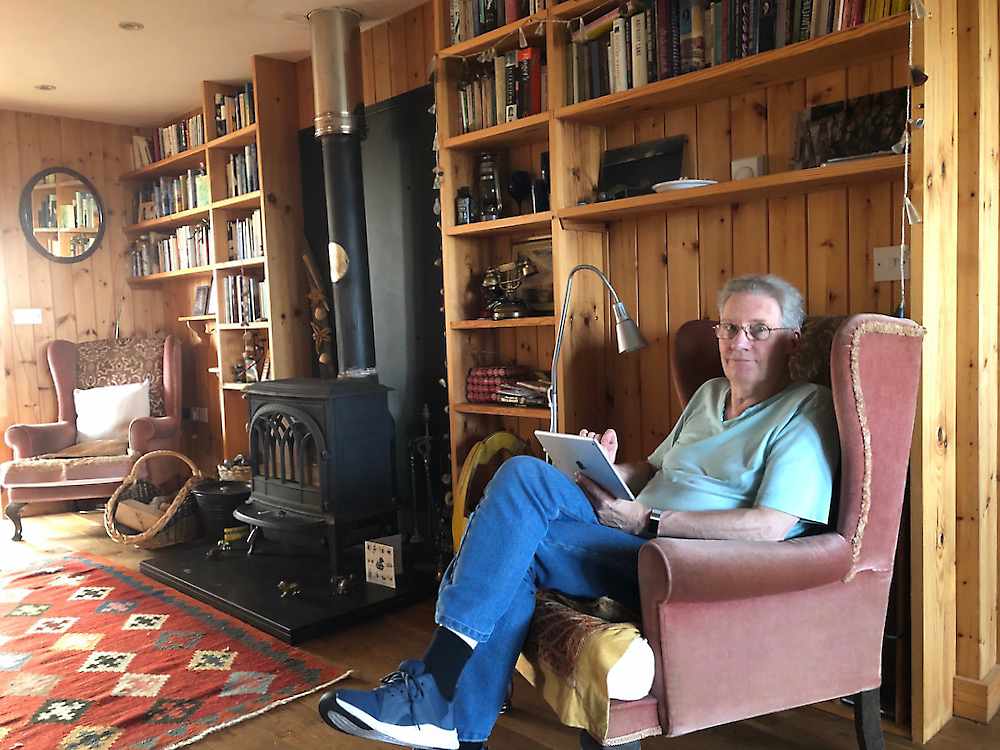 The whole place is stunning – oh and did I say, there’s a decommissioned nuclear power station very nearby? This is the view from the back garden to the power station.  And although there’s a garden shed in the immediate left of the photo, those white ‘shacks’ beyond the garden are in fact typical of the housing in Dungeness. 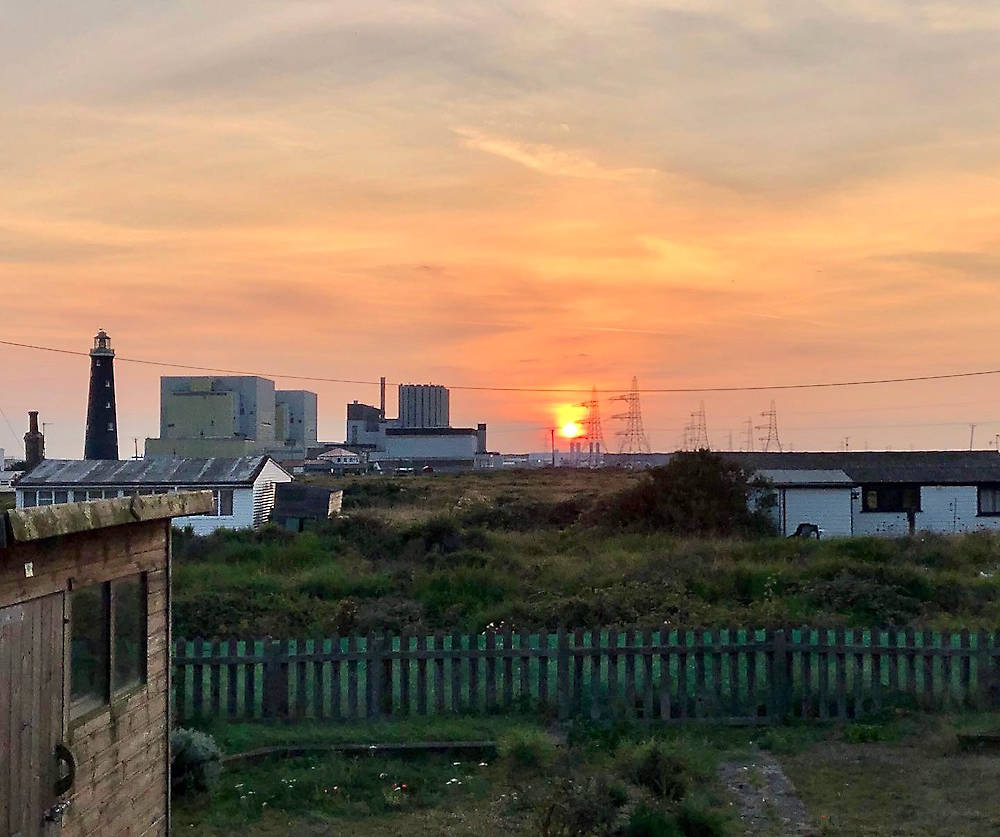 Every day we walked along the single road that led to The Pilot inn and this is what one sees. A vast expanse of flat shingle and vegetation. 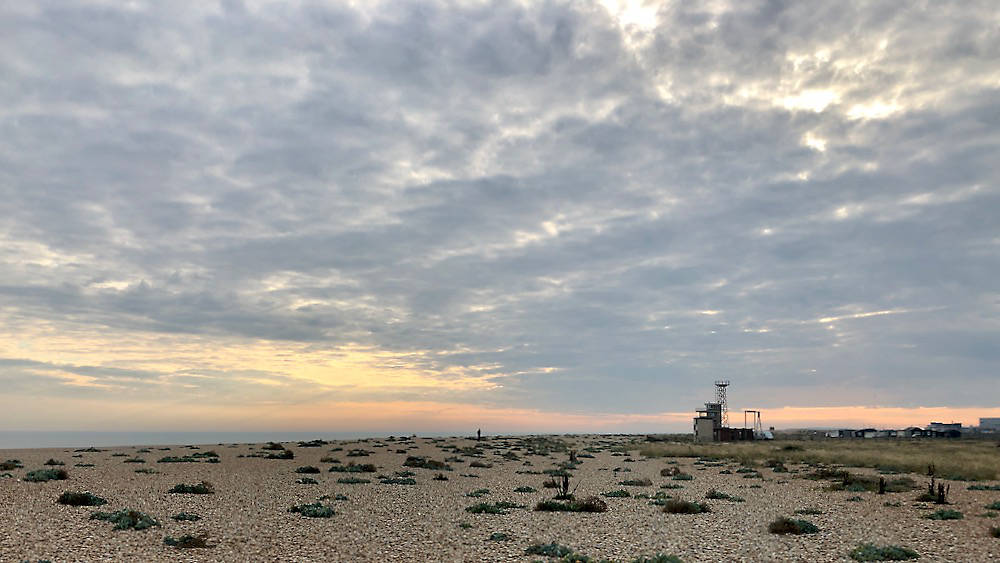 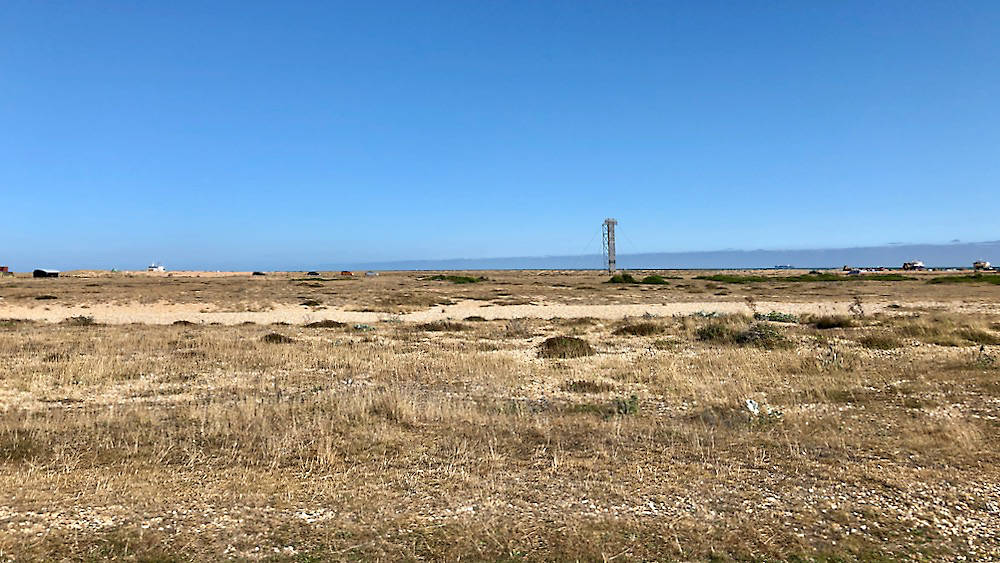 Dungeness is famous for Prospect Cottage owned and lived in by Derek Jarman the artist and film director whose muse, Tilda Swinton, has recently organised funding to keep Prospect Cottage and its wonderful garden maintained in perpetuity. 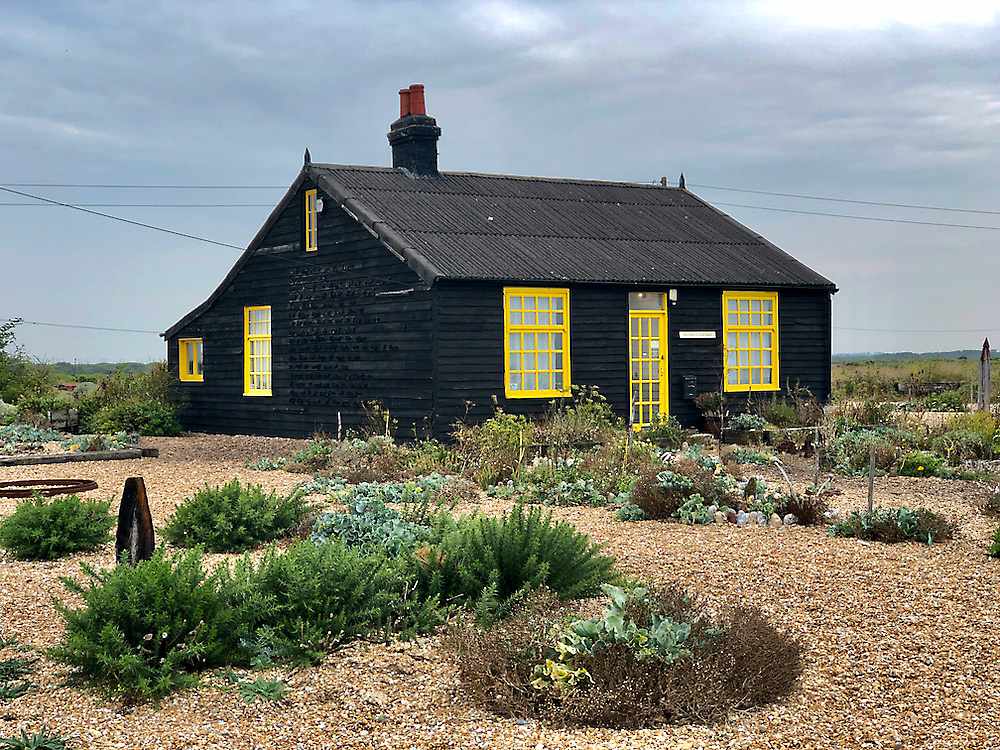 Here’s another shot of the garden. 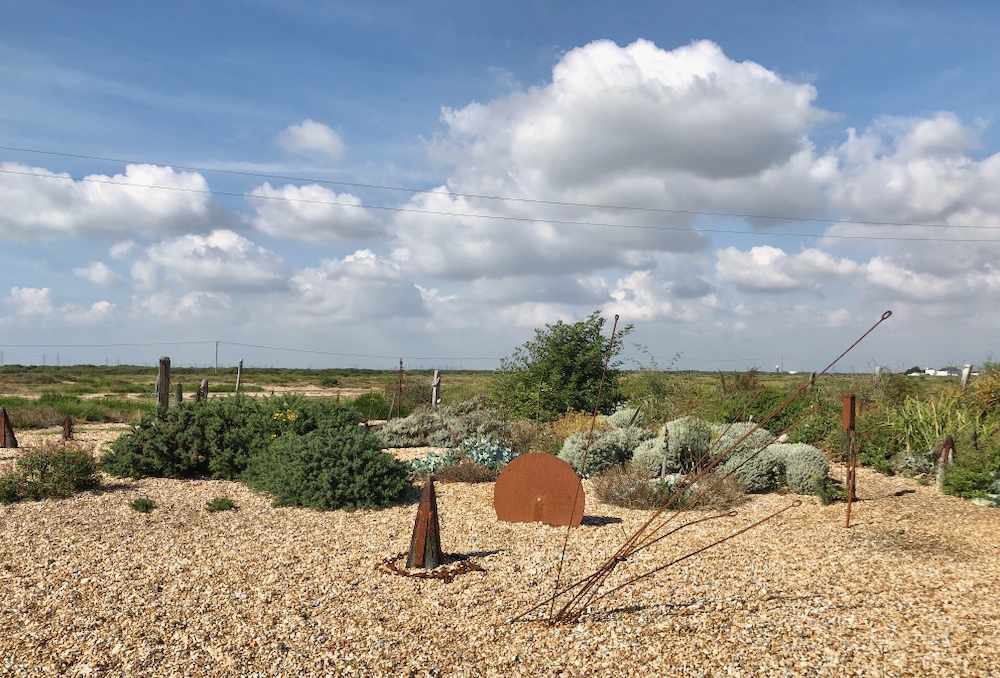 Dungeness is also famous for some amazing sunsets. I’m very happy to say that we had wonderful weather for the UK and for the time of the year, and nearly every night the sunset was just fabulous. With nothing in the way, because of the 180 degree landscape , we saw a huge red sun sink lower and lower. 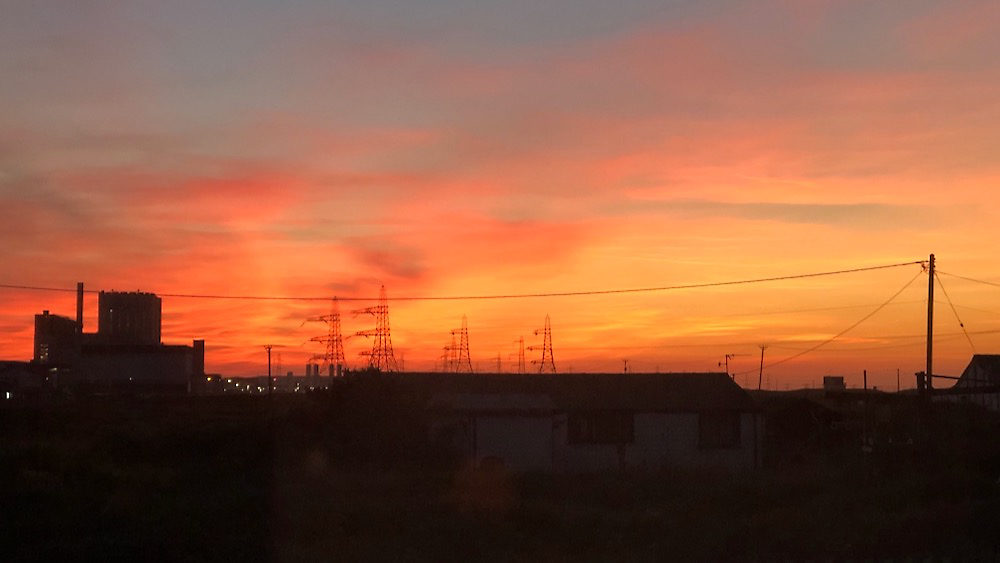 And then there was the rising of the sun. Here’s a watery sun appearing through the morning mist. 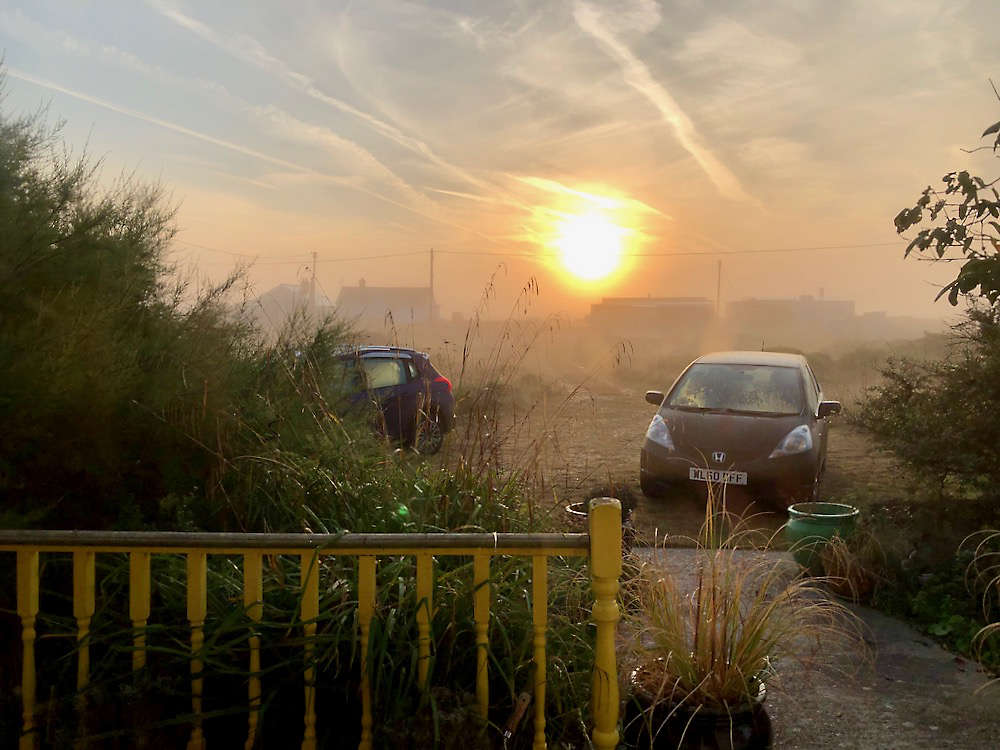 Here’s one of those converted railway carriages. 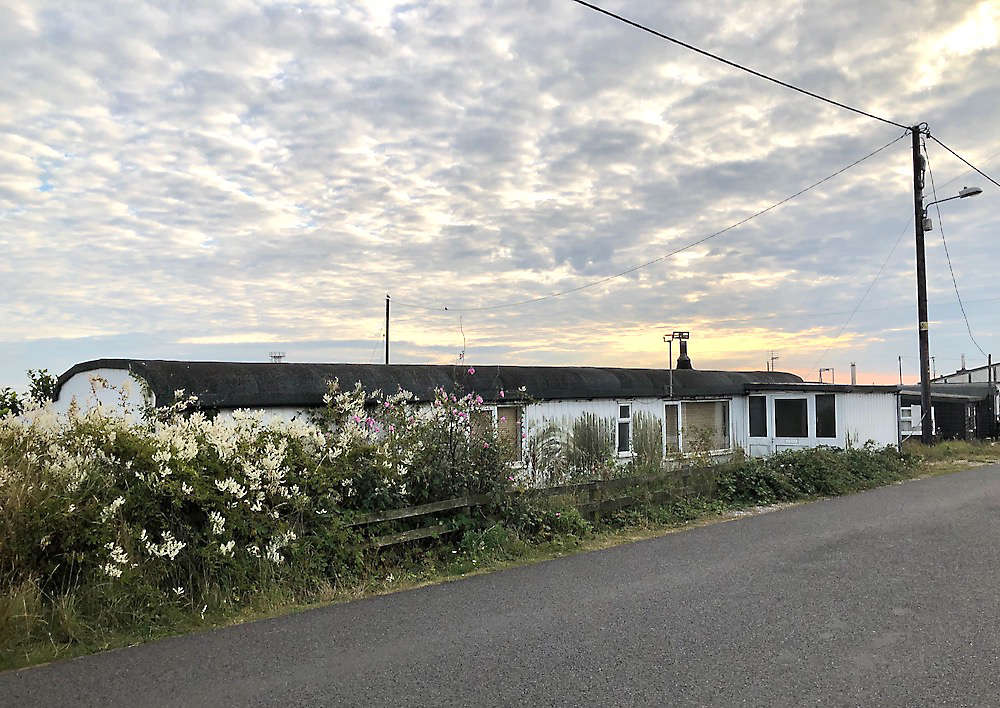 But there are also quite a few shacks that have been renovated to a very high standard. 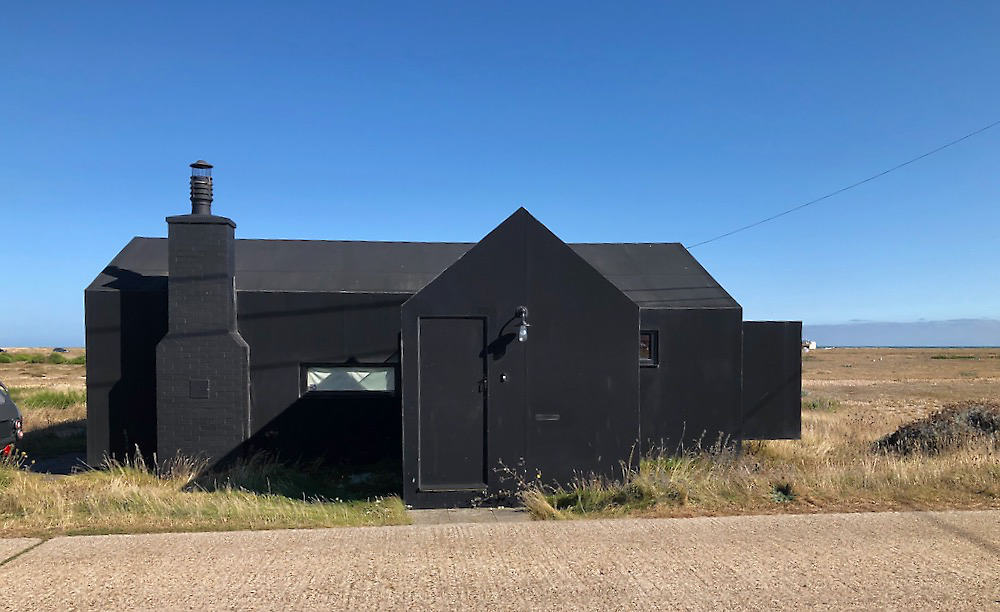 Unfortunately these are the cottages that one can rent through Airbnb at exorbitant prices. I wonder what the locals think of these?

We also went on two trips outside Dungeness, which although I don’t regret, next time I come I shall stay put and just chill and absorb the atmosphere of the place. The first one was a trip on the delightful miniature Romney, Hythe and Dymchurch Railway. I rather think Pete and Marion had the right idea as they got off at the first station and walked back to The Pilot inn and from there watched several trains go past sitting in the glorious sunshine and sinking a pint or two. We meanwhile did the whole trip and, really, I consider it’s better to see the train puffing along in the distance rather than being on it! 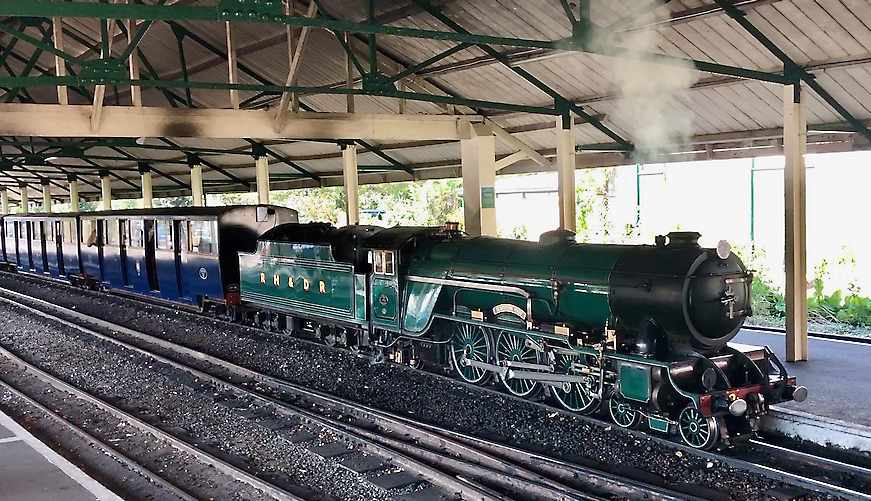 The second trip was to Rye on a very hot day. Actually it’s a pretty little town but quite touristy and I rather wondered why we were there. 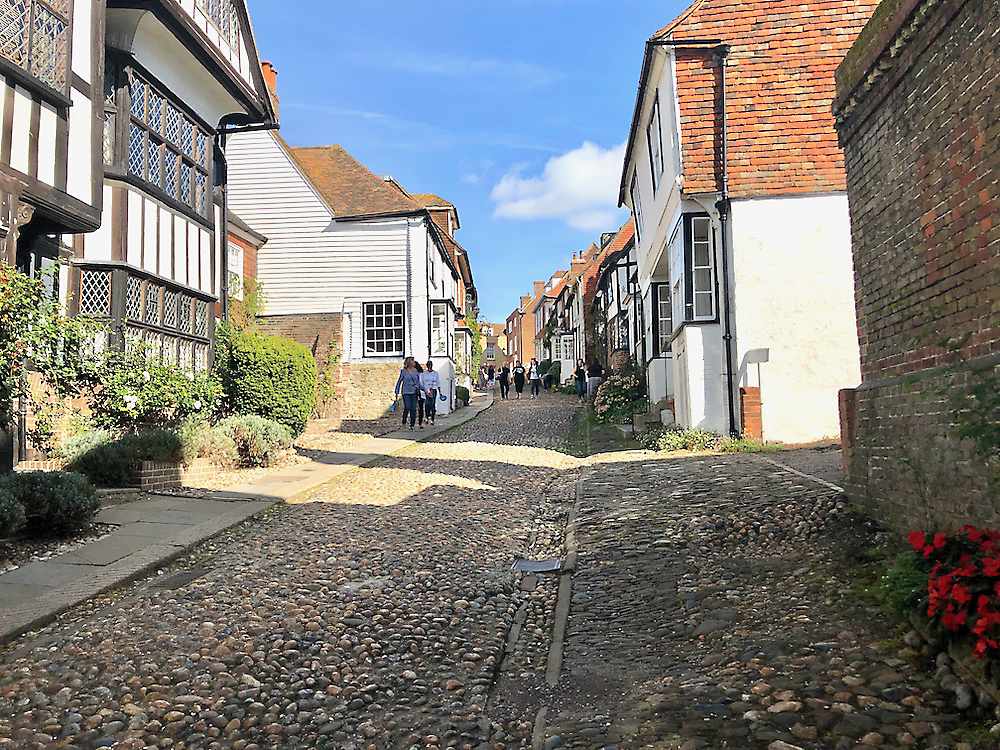 But it is picturesque, I grant you that. This is Rye’s famous cobbled street. The outing wasn’t totally wasted as I managed to find one item in a charity shop – a rather good retro dress – you’ll see it soon.

Pete and Marion left a day early and the cottage was soooo quiet after they’d gone! We went for one last walk. 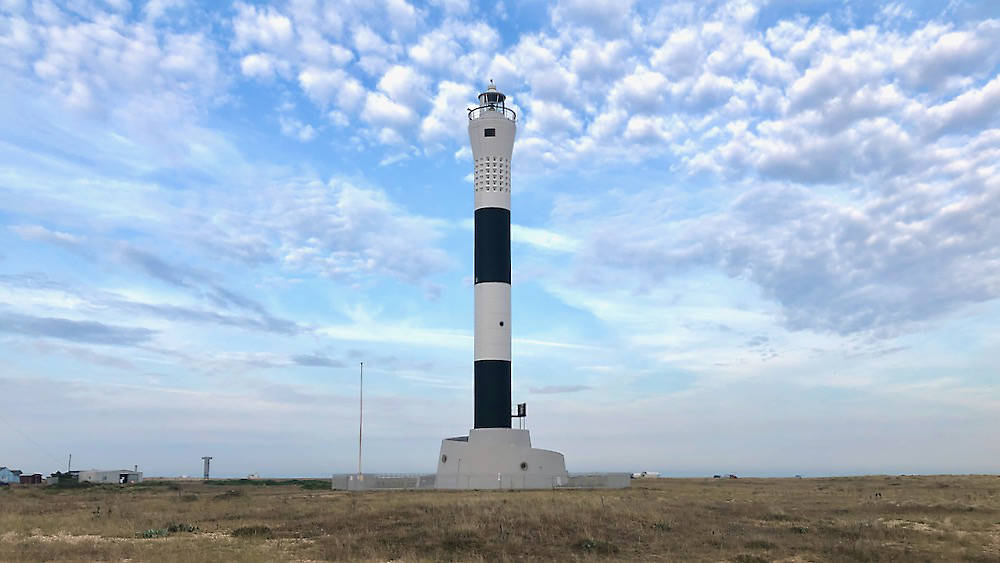 First we turned right and had one last look at the lighthouse, so essential in the tricky waters of Romney Bay and the Dungeness headland. And then we turned and walked one last time to Prospect Cottage. 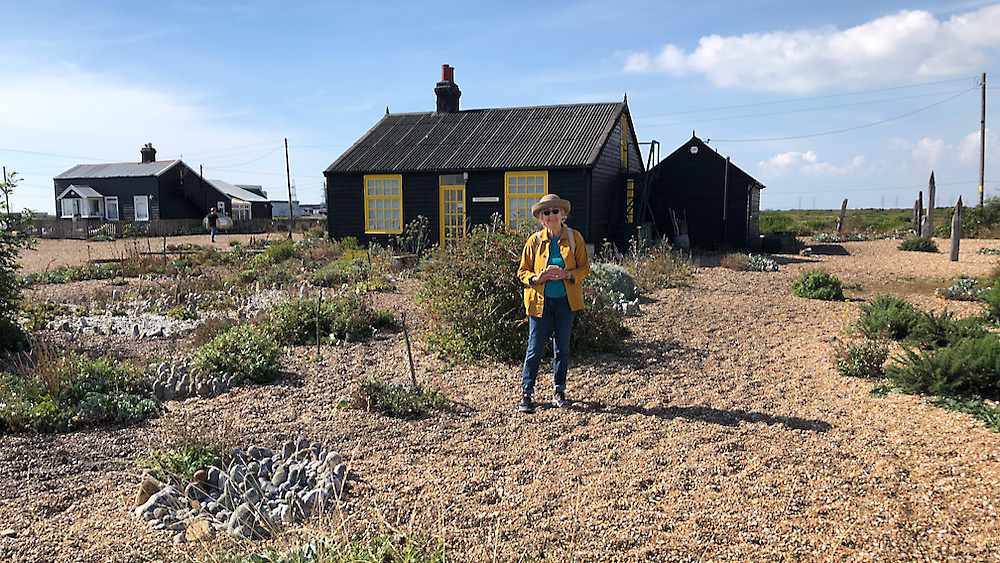 It was sunny but a cold offshore wind had got up which we hadn’t noticed leaving the cottage. Having boiled in Rye the previous day I rather wished I’d put on an extra layer!

But never mind, we walked briskly to Prospect Cottage and then turned and went back to Wi Wurri to pack and plan our next visit to Dungeness next year – because both Mr F and me, we can’t wait to go back!

That’s all for now.

40 thoughts on “My holiday in Dungeness”