Oh wow!  This was our first visit to an exhibition since November 2019. I’ve felt so starved of my cultural hits, which I just took for granted, you know, that visiting museums, art galleries and exhibitions was my way of life and that’s how I behaved. But hey, last week we got out and went to Brighton Museum for the exhibition, Rock ‘n’ roll with Me.  This was an exhibition of photographs taken by David Bowie’s very close friend Geoff MacCormack many of them rarely seen and indeed many were unseen before this event (it’s on till 23 January 2022). It wasn’t on the scale of the V&A Bowie exhibition (just three rooms) but it was excellent, nevertheless. 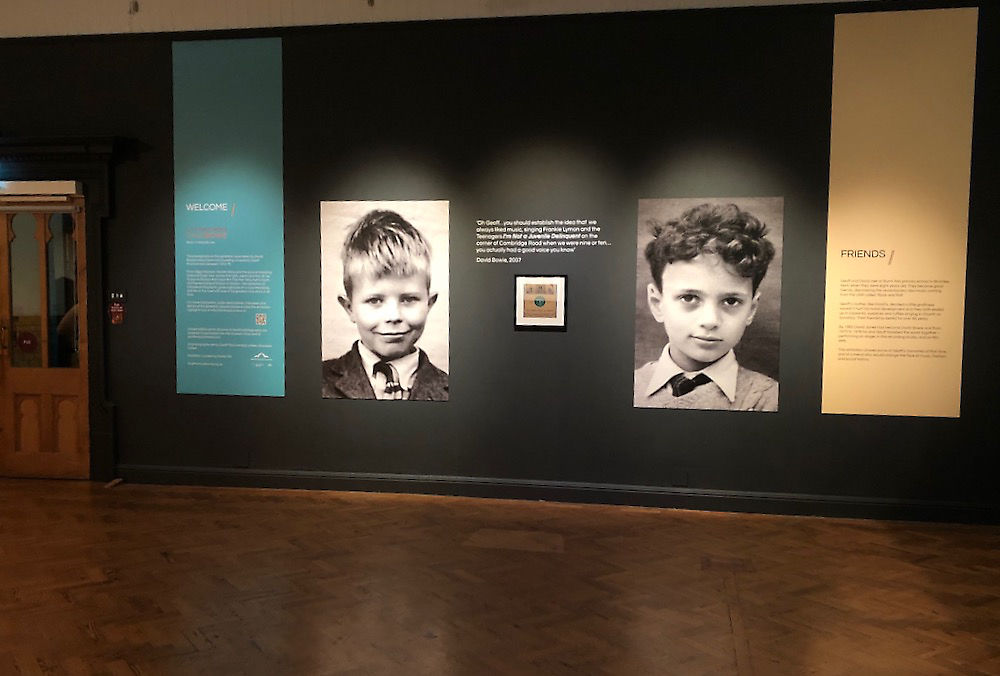 The app on the website, with Geoff MacCormack’s reminiscences of their time together, told us that they were childhood friends and first met at school and furthermore they were choirboys together!

Later on, from 1973-1976, Geoff MacCormack was invited to travel with Bowie on the Diamond Dogs tour that went across the USA, Japan, the UK and Russia where they travelled on the Trans Siberian Express. 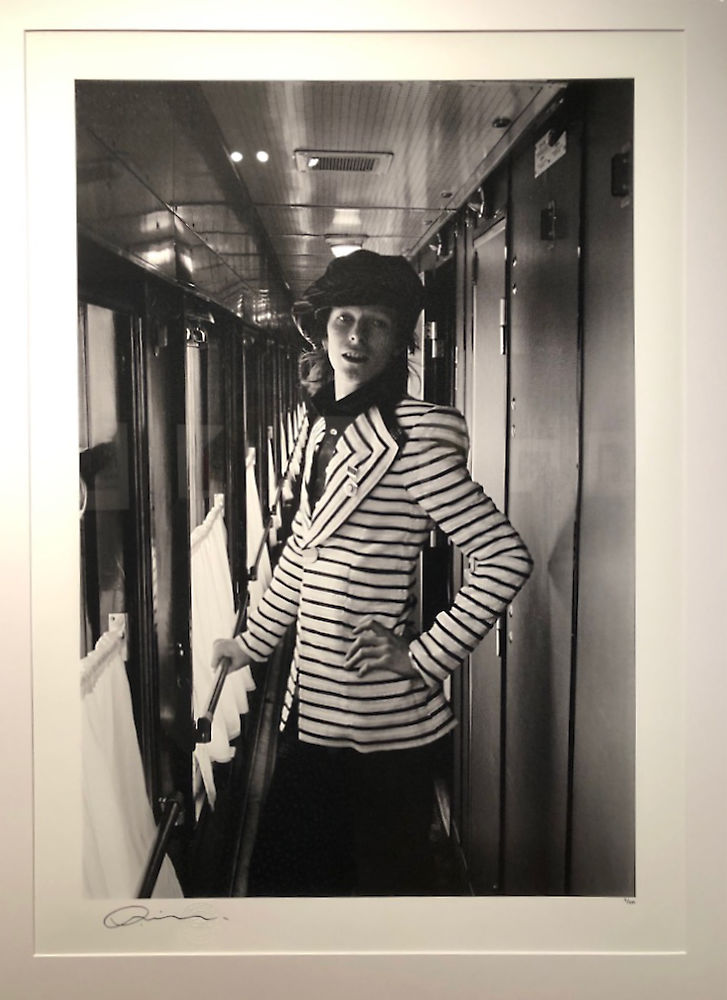 Here’s Bowie on the train, apparently he hated flying so they went everywhere by train and boat crossing the Atlantic to the States on board the Canberra. 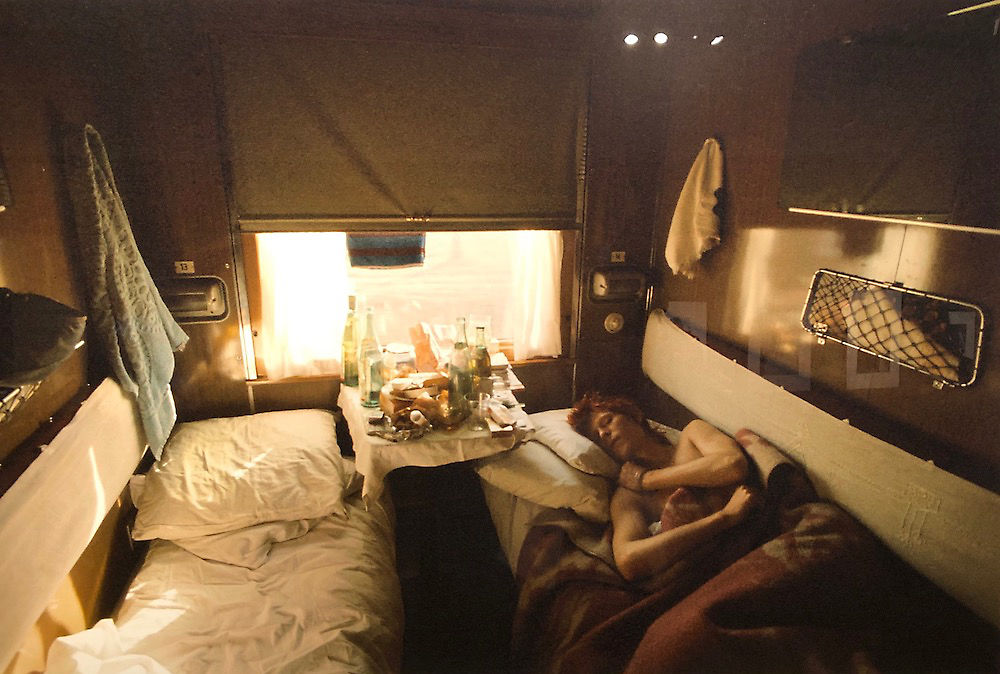 Here’s another photograph of Bowie on board the Trans Siberian express – apparently the tour was one long party from beginning to end! I think this is my favourite shot, it’s so intimate and lovely. And below, Russia again. 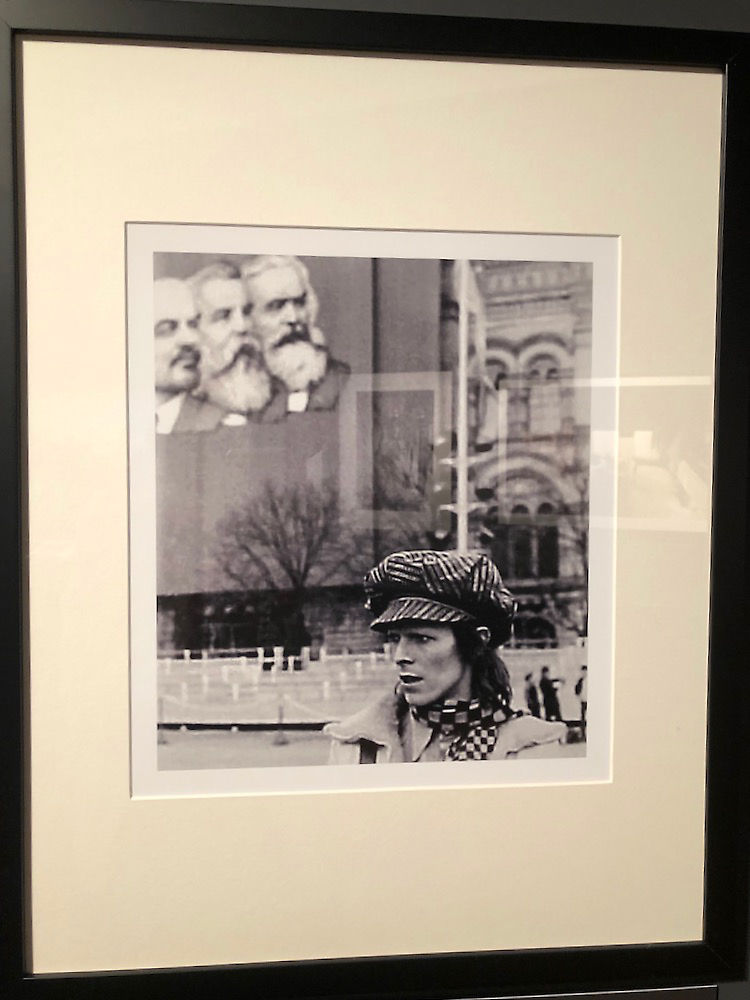 MacCormack also accompanied Bowie on the set of The Man Who Fell to Earth and was his driver and companion throughout the film. The middle shot below was taken on the film set. 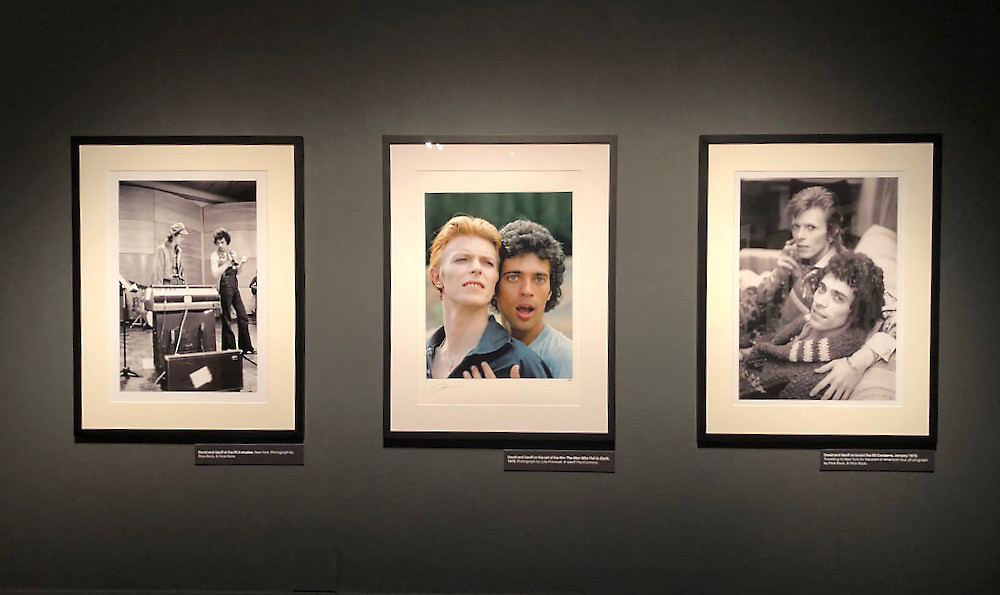 In addition the photograph on the left shows MacCormack taking part in the recording of Station to Station.

The shot below reveals the reflections of three photographs on the far wall. 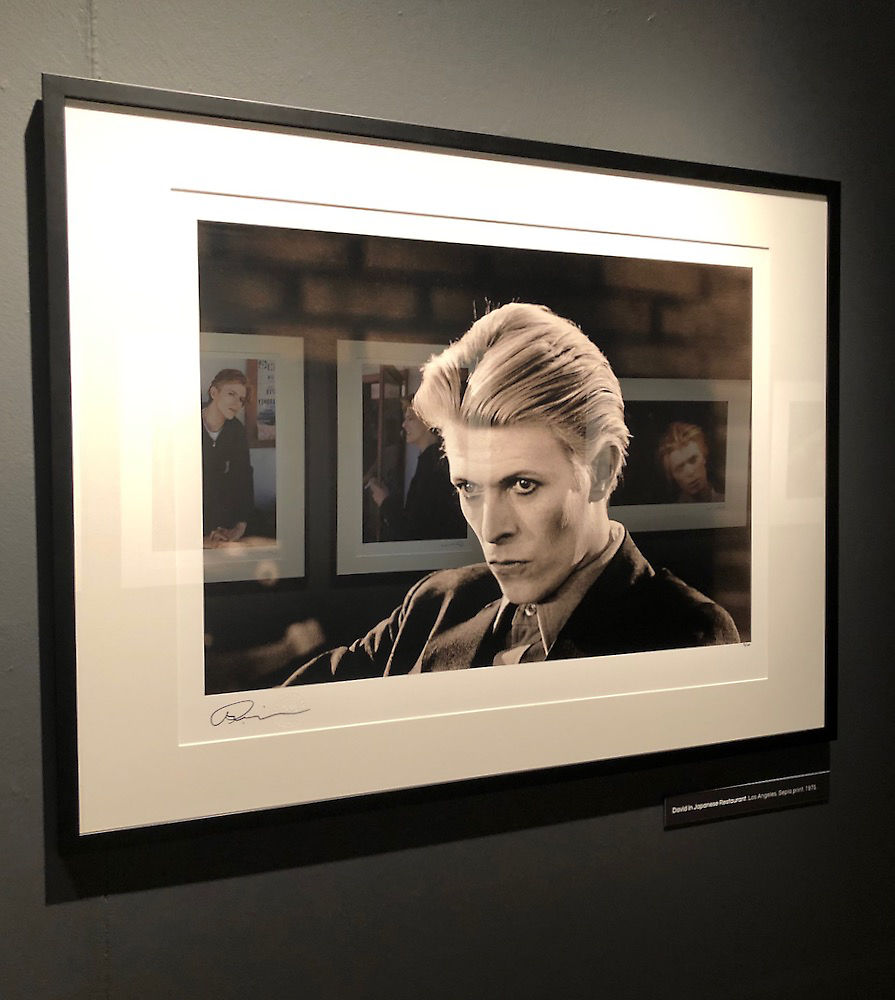 The photograph below on the left shows the last time they met and the entire exhibition was intimate and revealing of friendship and life on the road. 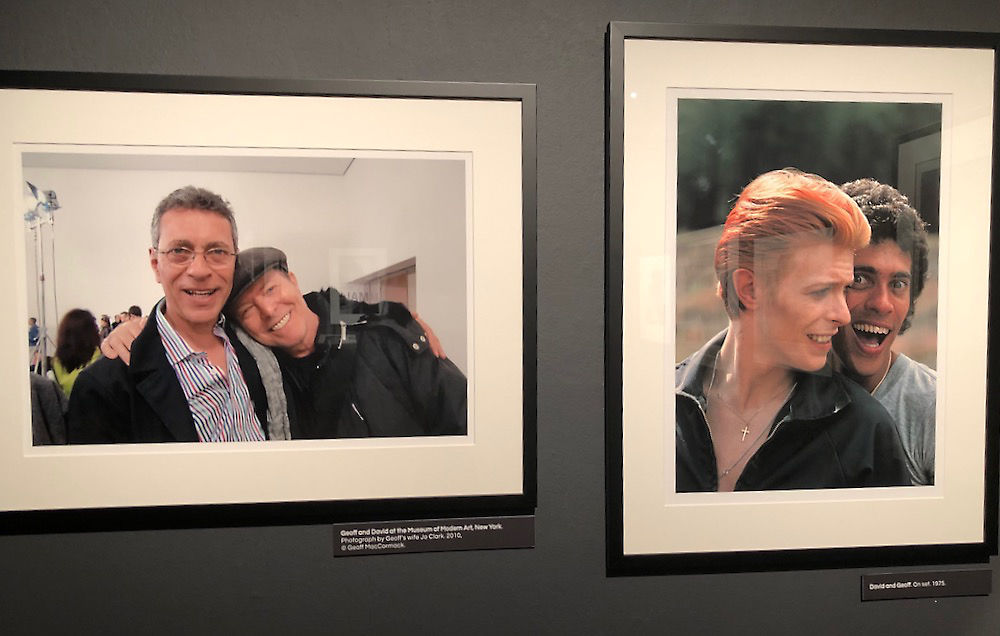 Afterwards we walked into the centre of Brighton.  This was a Wednesday but the area was rammed with people, which was rather alarming I thought. Despite the crowds we decided to eat out, which was quite an adventure for us as up to now we have been so cautious. We plumped for Franco Manca where Mr F had a pizza and I had a substantial salad that included roast squash and artichokes and very good it was too. However, as per usual, I wore the WRONG CLOTHES!

No photos of us at the pizza restaurant, I was very much in the moment, but here is what I wore that day, the charity shop black polka dot dress with black leggings under. 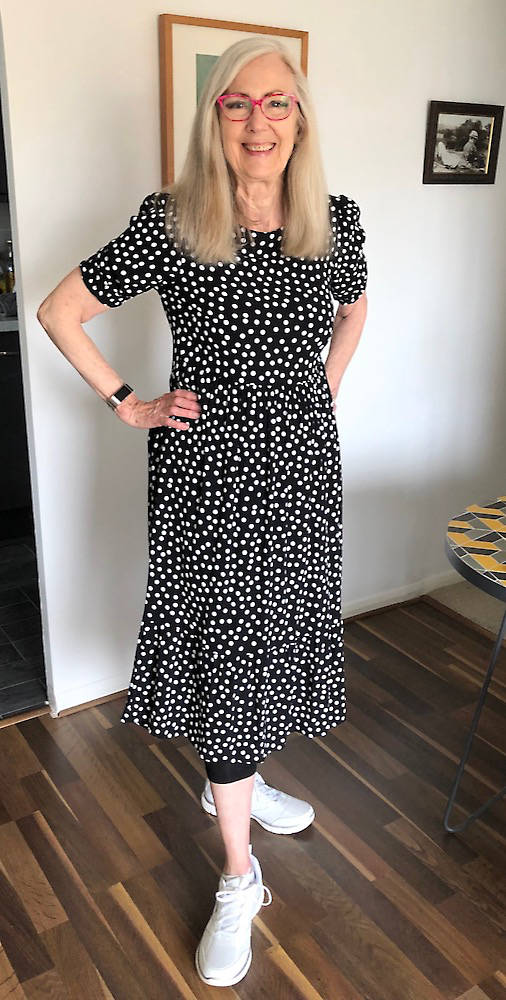 Plus a white denim jacket over along with my white trainers.

Unfortunately, although the outfit was just right for the exhibition (they’re always a tad too warm, I find) the outfit was not sufficient for afterwards as we ate our meal outside and I absolutely froze. Yes, this is August and supposedly summer, but the sky was sunless and there was quite a chilly wind. Half way through the meal I did get up to see if there was a table inside, and oh, my, word, every table was taken and the inside area seemed packed with people shouting at each other as the noise level was quite high. Quite a contrast, I have to say, to the exhibition, which even though it was inside with no obvious ventilation the number of people present was low, we were all masked and no-one spoke as we all went around the exhibition in a reverential silence.

So, no way was I going inside the restaurant with all those maskless people (unsurprisingly case numbers are high in Brighton) so we stuck it out in the chill of a British summer and very kindly the waitress turned on the overhead heaters so I got a little warmth, but not a lot. It didn’t spoil the occasion but I had put a little cardi in my backpack and then taken it out as I said to myself, ‘no I won’t need it’ – but reader I did need it!

My steps were quite high that day as we walked to the Brighton Museum and back again via the seafront.  What a great Brighton day, yes, a bit of sun and warmth would have helped, but really that is why I live in Brighton – there’s always quite a buzz!

That’s all for now, but did you ever see Bowie live in the flesh?  Mr F did, in the Ziggy Stardust days too, lucky him!

P.S. I will be commenting on the dreadful situation in Afghanistan but I just can’t do it quickly, instead I’m reading a lot and thinking about it constantly and I’ll let you know when it’s done.

22 thoughts on “My first visit to an exhibition!”