Going back to the article on Helen Mirren (where she shared her feisty attitude to reaching 70) she also said that no, she didn’t think she looked better now she was older, instead she said she owed a great deal to good lighting and makeup. Well, I think her bone structure and genes (and her attitude) must have something to do with the magnetic appeal and allure that she has. But, I do agree with her, about the lighting and the makeup. 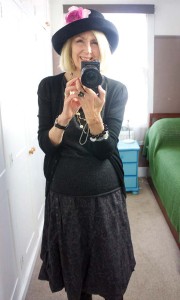 For instance, lighting. I struggled with that for some time on this blog, but think that I have just about got the lighting right for the pics that illustrate my posts. Here’s another of the hat photos, which a lot of you have praised (the hat, that is, rather than the photo) but those photos were lit in exactly the right way – which is something I’ve learnt to do over the last few months.

And makeup. I wouldn’t be without it, and that’s because I’ve always worn it. From an early age, I’d watch my mother sitting at her utility dressing table (that matched the wardrobe) pouting her lips as she put on her Helena Rubenstein lipstick, and dusting her face with powder with a swansdown powder puff. There was a certain talcum powdery smell and an aura of femininity that I yearned for, even as a young child, so as soon as I was a teenager out I went with my pocket-money and bought the pink lipstick and blue eye-shadow that was all the rage then.

And I still wear makeup, and will do until the day I die. Really. Because a little makeup, applied in just the right amount, can do wonders for you as you age.

I often put links in my posts to articles, and to other blogs and websites. But if there is one link I really, really, want you to click on, it is the ad for Tricia Cusden’s Look Fabulous Forever, which is on that right hand side-bar (or scroll down if you’re on a phone). This is because not only has Tricia developed some amazingly good value make-up (which I wear by the way) she has also developed some incredibly sensible and instructive videos on how to put on makeup as you age.

For instance, I was going to write about my makeup top-tips but no, Tricia has a brilliant video for that. I was also going to talk about the necessity of darkening your eyebrows (I dye mine) no, it’s all there on Tricia’s website.   And rather than putting in links in this post if you click onto the ad and want to buy some makeup, in conjunction with Look Fabulous Forever, we can offer you a 10% discount (on purchases over £30) by putting in the code FFS1. (That’s a numeral 1, btw, not an i.  On my laptop the numeral wasn’t 100% clear. Actually I don’t think the font is quite right so might change that, anyway, that’s my initials FFS plus a numeral 1).

Do let me know what you think of wearing makeup into your 70s and beyond. Personally, I see it as just part of my routine; an every day practice that I shall carry on as normal. Is that how you see it?

P.S. Btw, it is important to tell you that I haven’t been paid for any of the nice things I’ve said about Look Fabulous Forever.  I’ve used LFF products for over two years now, and absolutely love the LFF face prime and base.

4 thoughts on “Makeup – and an offer I hope you can’t refuse!”