I wonder whether I’ll be continuing this diary throughout the year or will it come to an end soon? Actually, I’m thinking that I might do one more at the end of April and possibly May, and then maybe continue the theme of the post as a summary of the month’s end. Anyway, here in England (Wales, Scotland and Northern Ireland have slightly different rules and regs) the relaxation of the Christmas lockdown has begun.

People seemed to like the list I put up last month so I’m repeating it so you can all see how very strict this last lockdown has been and how slow the relaxation is:

No earlier than 17 May

No earlier than 21 June

Phew, this is the beginning of a better summer to come, although, as you can imagine I shall be very, very careful, in fact, I am the first to admit I’m a bit anxious about this relaxation, and readily admit that throughout the pandemic I’ve been near phobic about meeting up with people. However, what a month March has been as I visited the dentist (two veneers coming up) the opticians (new glasses very soon) and the chiropodist (unfortunately, no new feet but it was so good to have a professional look at them and sort out a couple of issues). And what’s more I’ve travelled to two of these appointments by bus, no less! Hey that’s progress for me, although many of the occupants of the apartment block I live in would think me a right wimp, as they’ve been travelling by bus throughout the pandemic to get to the centre of the city to do their food shopping. Me, I now go to our wonderful deli for good veg and other little luxuries, plus the butchers for the best cuts of meat, but everything else I order on line. Shopping for food and other household requirements is not really my idea of a good day out, however, when the non-essential retail opens I shall be over the moon and jump for joy.

I got a foretaste of that positive joyous vibe when I went to the opticians in Lewes (a town just a short distance away) and had to go to the Post Office, which was situated in the stationers WHSmith.  This is a shop I hardly ever go into, but as I was queuing up I turned my head and looked at the contents of the aisle next to me, and, and, it was pencils of every colour you could imagine – I thought how beautiful they looked. I finished posting my parcel and instead of walking straight out of the store I walked up and down the aisles in raptures, saying to myself, ‘oh my word, crayons, pens, papers of different colours, files, office stationery, magazines, and actual books’. To me, it was a positive Aladdin’s cave of colours and the experience of being in this very ordinary store was as good as any art gallery installation and a cornucopia of pleasure. To be this enthused by a very ordinary shop must mean I’ve been starved of that visual hit that I get when I visit art galleries, but hey May 17th here I come! Meanwhile I shall enjoy the month of April enormously 🙂

What I’ve been watching and reading

I note that I didn’t say anything about my reading last month so here goes. In February I read The Siege by Helen Dunmore and in March I followed that up by reading its sequel The Betrayal. These books are not an easy read as the first book is about the siege of Leningrad and, oh my word, how those Russians suffered during the Second World War and then afterwards through Stalin’s regime. During the siege the citizens of Leningrad were driven to eating shoe leather amongst other ghastly things. Why would I want to read about this?  It is beautifully written and almost a page-turner in its depictions of that grim life and of course, the characters are believable, and you care about the two main protagonists Anna and Andrei, who meet in the first book and are swept up in the challenges and horrors of Stalin’s purges in the second. Actually, I’d agree with the review on the back of one of the books, both novels are powerful, moving and touching.  I continue to think about these books and their contents long after I finished reading them.

For light relief I began the second in the Discovery of Witches trilogy, Shadow of Night. I’m quite conflicted about reading this book as the author, Deborah Harkness has the most amazing ideas and the story is beyond intriguing, but her style of writing irritates me, as it is far too wordy and reads rather like a film script. Despite finding the story interesting and wanting to finish it, sad to say, I’m bored by the wordiness, so I struggle on. Here’s the thing, those Dunmore books, they’re slim volumes, the Harkness books, they’re huge door-stoppers: quantity of words does not equal quality. That’s not much of a recommendation!  But you might like it.

I have also read Hadley Freeman’s memoir of her family, House of Glass, which is the story of a twentieth-century Jewish family in both Europe and the States. Freeman is a Guardian journalist and boy, can she write.  It’s a brilliant read – I highly recommend.

As well as being half way through Shadow of Night, I am also half way through Failures of State. The Inside Story of Britain’s Battle with Coronavirus by Jonathan Calvert and George Arbuthnott. This is a mind-boggling read, but wouldn’t suit anyone who rates Boris Johnson!  And I have another memoir waiting for me in the wings, Imperial Intimacies. A Tale of Two Islands by Hazel V. Carby, which looks as though it’s going to be a good read as it touches on the legacy of slavery and colonialism and how that impacts on families.  I’ve read one chapter and it’s beautifully written.

We watched only three films in March, of which one was awful and two excellent. The first good film was White Tiger (Netflix) a film made in India of the book that won the Booker Prize in 2008.  To say that it reminded me a little of Parasite will indicate that it was about the extremes of poverty and wealth and the travails that come with the master-servant relationship. Overall a very enjoyable film to watch.

The other excellent film was the Australian version of Rams (Amazon) which is the story of two feuding sheep farmers and their dog and stars Sam Neil. It’s very good and quite funny and worth watching, but for me is not quite as good as the Icelandic version, which came out a few years ago and was a darker tale with blacker comedy that suits my taste in films.  Also I preferred the scenery and the cold of Iceland as the land and its terrors play a large part in in both films with the Australian version showing us the devastation of fire in the heat of an Australian summer, while the Icelandic version uses the extreme cold of winter as part of its story arc. Both are well worth watching.

Talking about terror, we have watched all episodes of The Terror (BBCiPlayer) and very good it was too. This is the story of two ships, The Erebus and The Terror, going off to find the North West Passage. I won’t say too much about it just in case you don’t know the story of their voyage, but wow, the acting was superb, especially that of Jared Harris, although I’d say it was an ensemble piece with so many good actors too numerous to name. The whole series was an outstanding watch and I hope it wins many awards.

We continue to watch Call My Agent (Netflix) which is utterly delightful and have just started the excellent Deutschland 89 (All4) but do watch the first two series as there is so much backstory that will be missed. Likewise with the current series of Line of Duty (BBC iPlayer) which must be incomprehensible if you haven’t watched the previous 5 series as it is essential to understand the convoluted story of ‘H’ which lies at the heart of this gritty cop series. And I was quite devastated at the end of Unforgotten (ITVHub) but not saying any more as it’s quite a plot spoiler. A great series of decent coppers working on cold cases – well worth watching. And for some very light relief and laughs we continue to watch the wonderful Schitts Creek (Netflix). I adore the Rose family!

Well that’s all for now, I leave you with one photo of our walk by the seafront taken two days ago on quite a hot day for the UK. The beach on the right of the photo looks rammed. I shall avoid that area and look forward to more walks in different and hopefully quieter beauty spots! 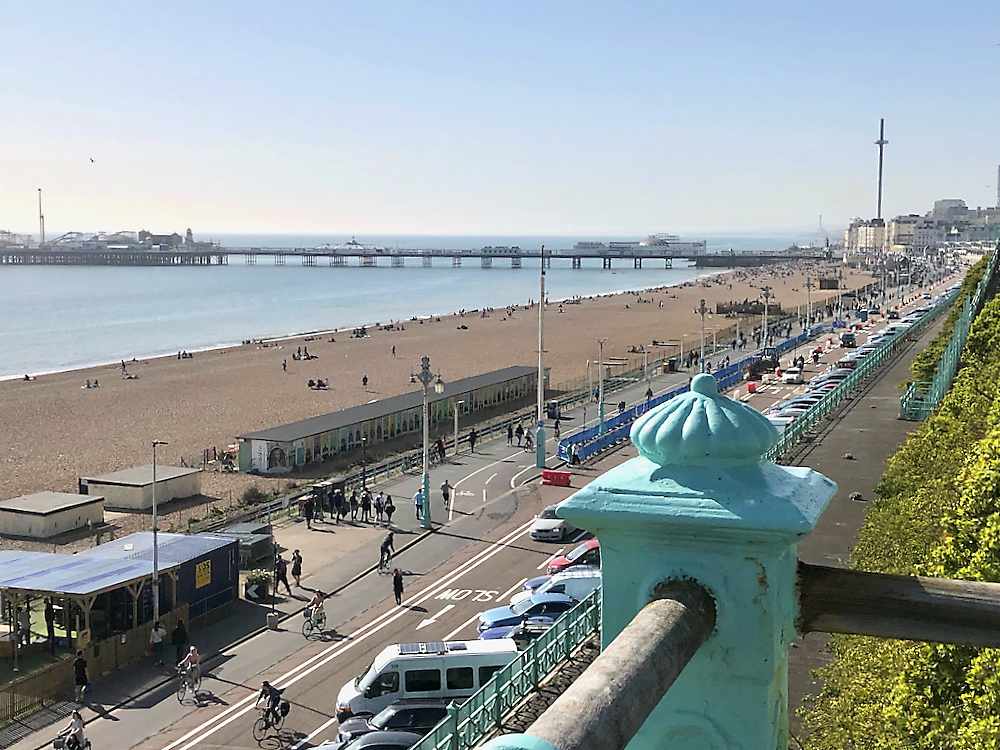