Phew, bit of a challenging week last week as I was recovering from tripping and falling hard on my face, oops a daisy as they say. I was fine, albeit a bit shocked so no need to worry, but my neck is a bit stiff so haven’t done as much writing as I hoped. Face was also bruised but recovering well and current photos will resume next week!

This photo was taken last year but is the hat I’m wearing most days. We’ve got a lot of mixed weather here in the UK with some days with wonderful cloudless blue sunny skies and others a bit misty and grey. Today we woke up to fog, but it burnt off for another blue-sky day – yay! 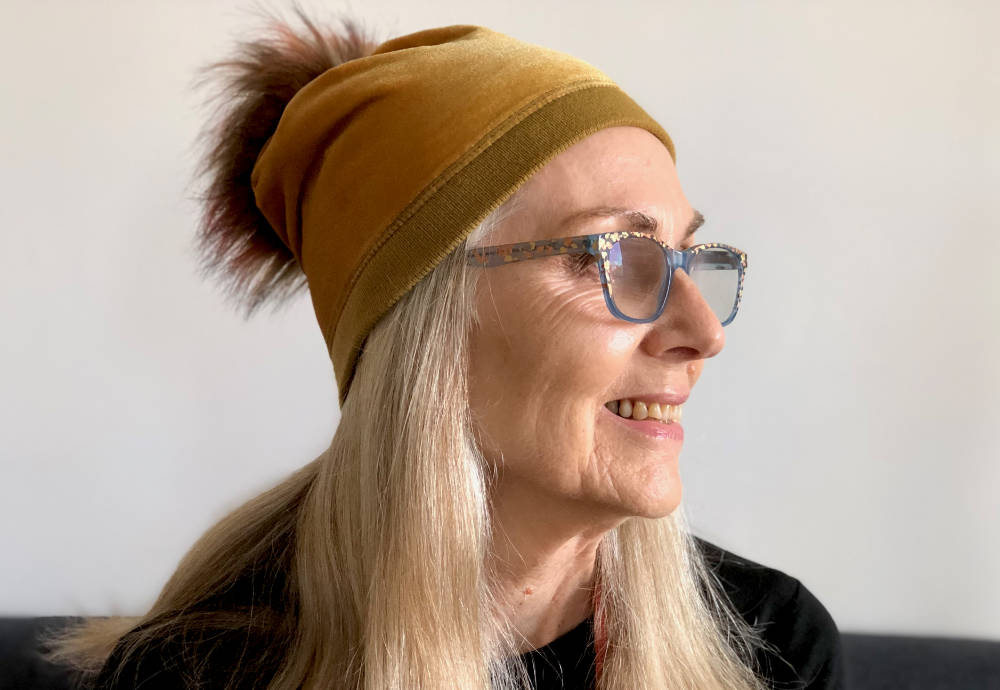 To illustrate these wonderful cloudless days take a look at this. 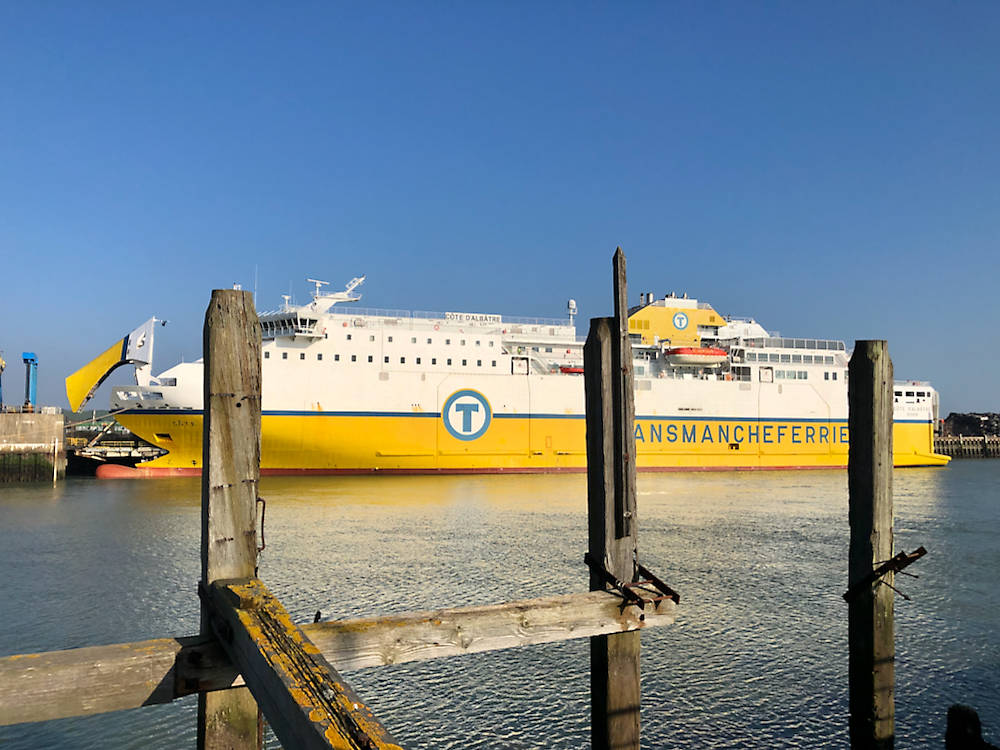 We actually walked somewhere else! This was Sunday and it was so breathtakingly Spring-like we drove along the coast admiring the sun, the blue sky and the sea, and found ourselves in Newhaven, the little seaport where I used to live. We walked around the harbour and stopped to look at the ferry. One day I’ll get on that ferry and go to France – maybe in 2022.

I’m looking forward to wearing more of these hats, but the wind is still quite chilly and I do like my ears to be covered. 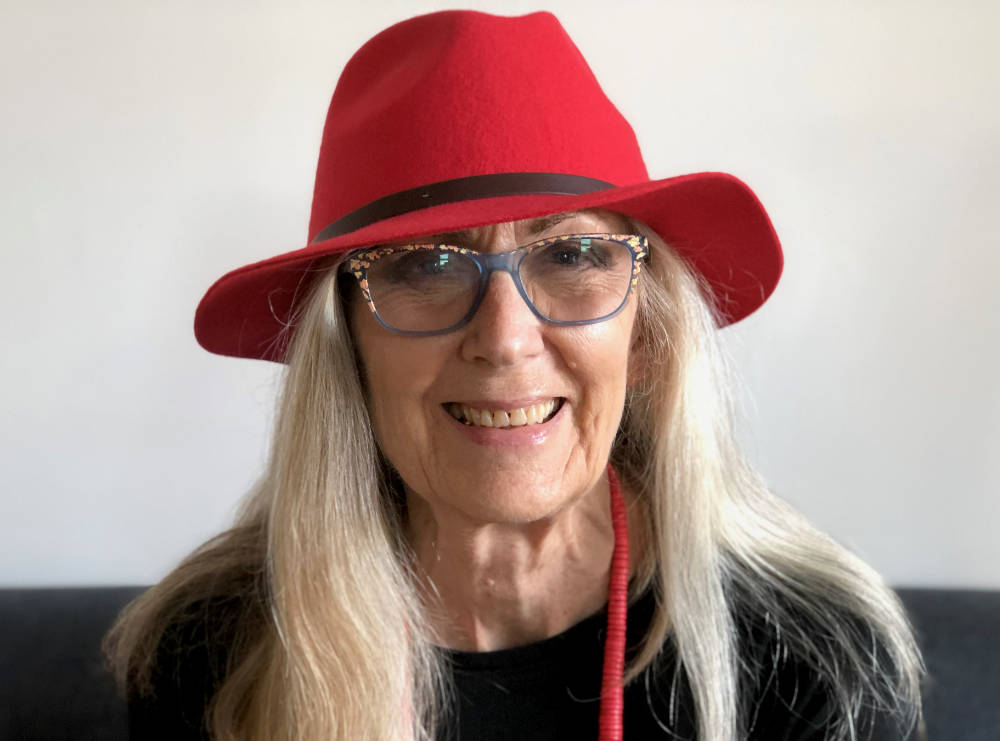 So, back to the lockdown diary, which is a couple of days late, but still, here we are on the way out of lockdown. Mind you for those of you outside the UK, this is not going be an instantaneous free-for-all with everything open from now onwards. It seems that our great leader has finally learnt to do things at a slower pace. Also note that the following is about England only, as Scotland, Ireland and Wales are doing pretty similar things, but they do so with guidance from their own leaders.

Anyway, just to show you how cautious this release from lockdown is I’ll pick out a few of the points that we all have to follow.

But, oh, my, word, do we have to follow this, because if we don’t, we’ll all be back into yet another lockdown and we don’t want that do we?!  I expect I’m like a lot of you, as in, despite having adjusted well and never being bored, I’m finding these last two months so very, very tedious. The reason for this sense of ennui is, I think, that it’s now the month of March and we’ve had a whole year of this pandemic, so at this moment, rest in peace all those who died, and three cheers to all those front-line workers who could not self-isolate, who stepped up to the plate and continue to do so (teachers are also very much in my thoughts at the moment). Then give yourselves a big hug for getting through this, and what’s more cut yourselves some slack for eating those chocolates and putting on weight, and for not writing that novel, and not dressing up every single day in Instagrammable clothes, and not being becoming an influencer in your response to something pretty big. I mean, this is a once in a 100-year event. Instead, you have endured, and that is wonderful. And, as I keep saying, there’s much to look forward to 🙂

But back to a few points from the timetable that England is now under:

No earlier than 12 April

No earlier than 17 May

No earlier than 21 June

So there you are. Nearly there but still under lockdown for the moment, and a slow and cautious step-by-step approach to greater freedoms.

What I’ve been watching

We watched 7 films in February, and only one was awful, won’t even say what it was.  But like a lot of people I watched The Dig (Netflix) which was outstandingly lovely as long as you don’t expect a total fit with the actual events and people. For a start the character played by Carrie Mulligan (Mrs Pretty) was twenty years older, the photographer who has a romance with the character played by Lily James (Peggy Piggot) was a fiction and actually takes the place of two women who were there at the time, so not a particularly good film with regard to accuracy and depiction of women.  But setting all that aside the film, which is based on the book by John Preston (the nephew of Mrs Pretty) is a very good and enjoyable film to watch, and quintessentially British in a stereotypical way, as in, we didn’t all have the great wealth of Mrs Pretty to be able to pay for such a dig. But hey, what a service for the nation as the finds were stunning and revelatory. Delighted to say we’ll be going to Sutton Hoo (fingers crossed) when we go on a staycation holiday in Suffolk in June. Anyway, that’s 5* from me.

Another 5* film and one that I think of as quintessentially American was News of the World (Netflix) starring the very reliable Tom Hanks and the amazing twelve-year-old actress, Helena Zengal. There’s a similarity with that old John Wayne film, The Searchers, but it’s a nicer film, and well worth watching with both characters developing and adjusting to their own particular situation.  A really good watch and a 5* film.

Two 4* films were respectively Gerard Butler in Greenland (Netflix) and Christopher Guest and company in Best in Show (Amazon). Look, Greenland is what it is, it is a disaster film with Gerard Butler’s character doing his utmost to get his family from the States to Greenland when the world faces an extinction event. Greenland, btw, is definitely not green as it’s mainly covered with snow for most of the year, and funnily enough although it appears to be a safe haven for Americans, it is in actuality an autonomous Danish dependent territory with some self-government and its own parliament, so were there any Danes in that shelter? Maybe in a parallel universe, Trump bought Greenland – do you remember that he wanted to?  Best not to delve too deeply and just immerse oneself in quite an exciting film – I enjoyed it.

As for Best in Show, you know I am very much in love with Schitts Creek, so when I realised that the two main characters, Eugene Levy and Catherine O’Hara, were part of that great ensemble of crazy films made with Christopher Guest and co, I immediately looked for one to watch and there was Best in Show, all about a dog show and its participants, but hey it’s the cast you love, and Eugene Levy and Catherine O’Hara didn’t disappoint.

I’m quite sad to say that Bill & Ted Face the Music (Amazon) with Keanu Reeves (swoon) and Alex Winter was OK but nothing special, so it’s 3* from me. Another film that passes the time and kept me awake when I was falling asleep at 7.0pm after a non-sleeping night was White House Down (Amazon) starring Channing Tatum. It’s not bad, you can tell from the title it’s subject and it kept me awake, so just about 3*.

There’s a lot of good stuff to watch on the television these days. We haven’t started watching the much talked about Bridgerton (Netflix) as we want to finish The Great (All4) first. We don’t like watching too many dressy-up Jane Austen type television series. But this latter series is such good watch and so very well acted, and I’m sorry Elle Fanning, starring as Catherine, didn’t get a Golden Globe. I think this is perhaps the best thing to watch, but it is closely followed by Call My Agent (Netflix) which is also very good and funny with it.  Another Walter Presents series that we are following is All My Sins (All4). It’s the usual slightly noirish Scandi detective series set in Finland. It has to be the first Finnish series we’ve watched as their language seems so different to other Scandinavian languages. Like a lot of people in the UK having watched so many Scandi noirs we’re really au fait with the sound of Scandinavian languages, if not exactly the sense of the words, although I think we’ve all learnt the word, tak for thanks. But the speech of the Finns is very, very different.

We continue to watch Snowpiercer (Netflix) which is bonkers and surreal – don’t watch if that’s not your cup of tea, but the wonderful Unforgotten (ITV) is back. It’s a cold-case detective series starring Nicola Walker and Sanjeev Baskar and is a really high-quality watch.

Three further programmes are highly recommended, there’s Mary Beard’s Inside Culture (BBC iPlayer) which is very entertaining, the second series of Grayson Perry’s Art Club (All4) and finally a really outstanding Lucy Worsley documentary on the Blitz Spirit (BBC iPlayer) which I thought was one of her best.

Finally, we have discovered Veep, which we watch on an actual DVD, as wherever it is, each episode had to be paid for, which would be far too expensive. The script is written by Armando Iannucci, the outstandingly brilliant and witty screenwriter of so many television series and indeed films. He seems to have ‘got’ American culture and the challenges that a Vice-President faces, although do tell me if I’m wrong! But it’s fun to watch.

That’s all for now, normal service will resume next week 🙂