What are you doing now that you wouldn’t have done before the lockdown? This month I cleaned my oven twice (ordinarily I would never….) plus I ordered some little storage boxes for my bedroom and bathroom drawers, which I’m sorting and tidying. I always felt that our flat is rather like a small boat, and consequently you stow away your stuff tidily. In actuality a lot of my ‘stuff’ was just dumped in drawers and cupboards so the flat looked nice and neat, but there was a lot of hastily put away items that had begun to accumulate.

I am also planting seeds. You might think I miss my garden, particularly now with the lockdown?  But that’s not the case. This flat was always about simplifying our lives, down-sizing, having a convenient and central pad for the city, and being out and about most of the time, which is out of the question now! The balcony meanwhile was going to be full of greenery and plants, and that would have satisfied my need to garden. What I miss, though, is ambling off to the garden centre and buying whatever I want to display. No such luck now. And there seems to have been a run on seeds and plug plants as so many garden centres are closed and/or all plants seem to be out of stock. I understand a chain of DIY stores has re-opened and they have gardening materials and plants, but from what I’ve seen from social media the queues to get into those stores were as bad as our supermarkets, so I shall avoid, as I do all forms of face-to-face shopping.

But let me count my blessings, my daughter has sent me some seeds: French beans, nasturtiums and peas. The supermarket had some fibre pots and I got some potting compost from eBay – so off I go! I’ll let you know what happens and if any seedlings appear. Although I always loved gardening I hardly ever grew anything from seed so I’ll have to just wait and see what happens – it’s quite exciting.

Here’s another blessing I bought this pot of cyclamens before Christmas and they’re still flowering! 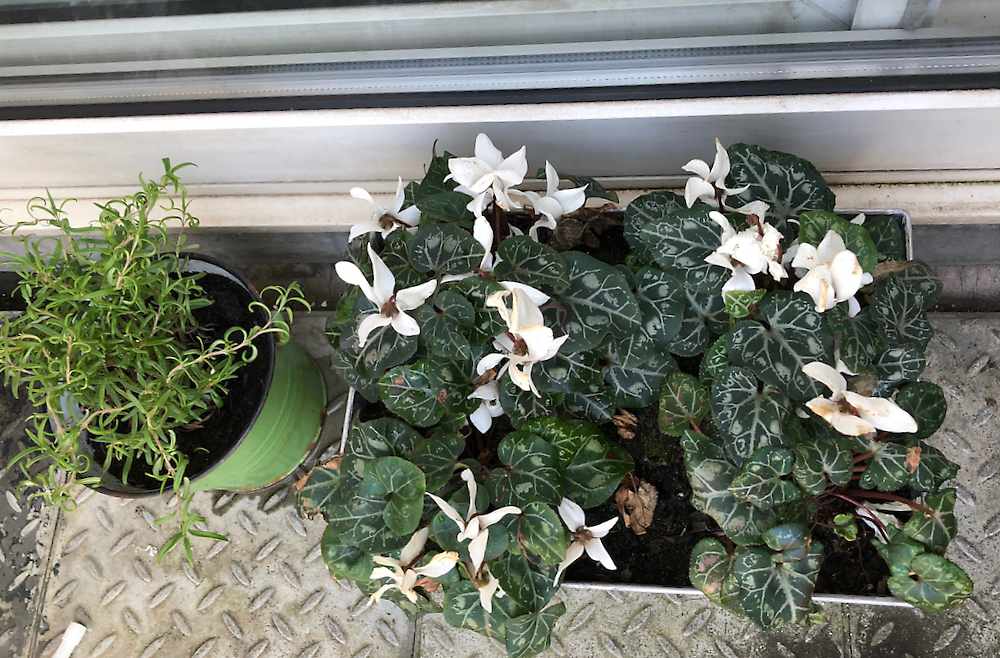 How are you all getting on with the technology to communicate with others? We love having a coffee with friends and family using FaceTime. I’ve also used Skype to have lunch with a friend and WhatsApp is also useful. A couple of days ago I chatted to my cousin using FaceTime, which was just lovely to do. It’s nice to see people. And what’s more I dressed up for the occasion wearing a top I bought in a flea market in France, plus my old sparkly black jeans. 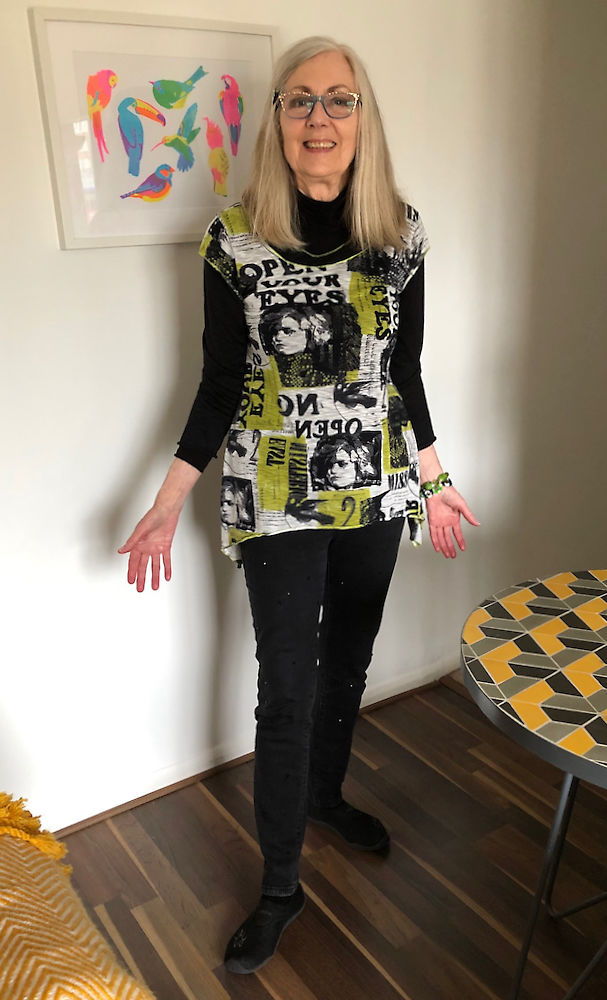 I’m also wearing more eye-makeup these days, which has made me feel so much better. This is me with glasses wearing eye liner and some dark brown eye shadow, plus quite a good amount of eyebrow pencil and the additional product L’Oreal Brow Artist Plumper, in a dark shade, which acts rather like a mascara for the eyebrows – works well with my bristly eyebrows. 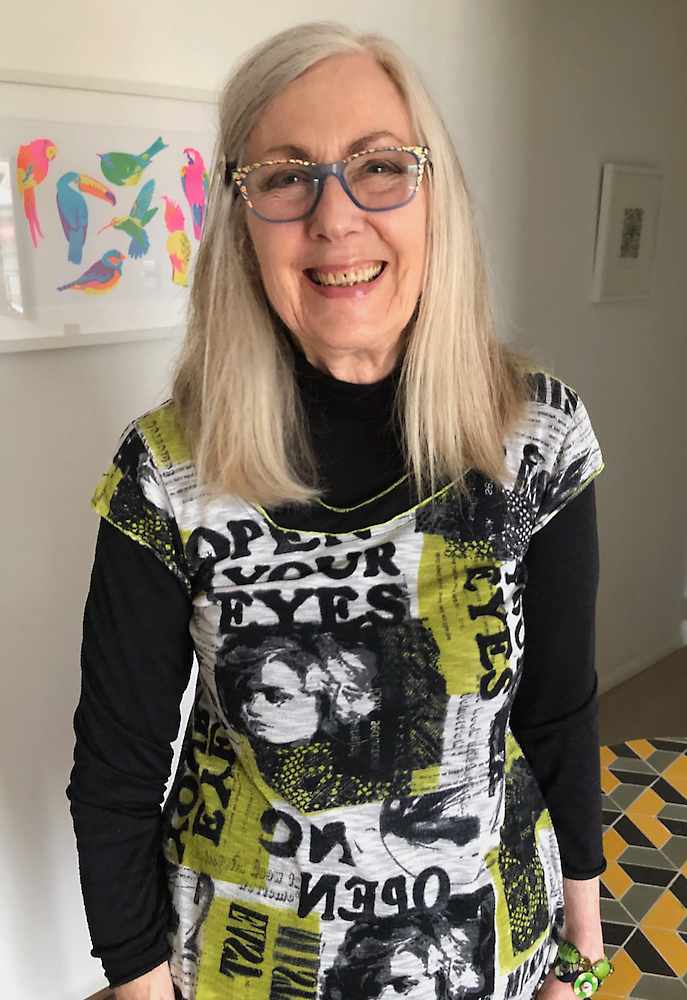 As I’ve said before I shall wear my glasses for the duration as the glasses must give you some protection against droplets. I’m still mulling over whether I should wear a mask outside as I definitely touch my face more often putting it up and down – you do get hot wearing a mask. I think the scientists would say that’s not good, but don’t forget if the whole population wore a mask then the rate of infection would go down, as if you were unknowingly infected you are keeping your droplets to yourself.

And speaking of droplets I give you a well researched article to read about Covid-19 Superspreader events in 28 countries. It’s a long read, but I do highly recommend it. Another good read was my last book, Clock Dance by Anne Tyler, which I loved as it was so different to the detective fiction that I’ve been reading lately. Currently reading The Other Half of Augusta Hope by Joanna Glen, but not sure where it’s going – I’ll let you know.

I have to say I am thoroughly enjoying Piers Morgan tearing into feeble Government ministers who are sent on to ITV’s Good Morning to be devoured by his questions that they cannot answer. Are they not prepped? They seem be universally and unbelievably awful, and unable to be truthful, that they messed up big time. I believe that the government is no longer sending anyone to this programme – hmm. But enough of this here, I will though begin to write in My Other Blog.  My concentration and energy is still a little below par so I shall take my time and my next post there will be in a couple of weeks time.

Other TV that I love is Killing Eve (BBC iPlayer) but it’s not to everyone’s taste. We’ve just finished watching the 4th series of Peaky Blinders (Netflix) and are giving that series a rest for a bit. WestWorld (Now tv) continues to leave me quite befuddled as to what is going on but I still watch it.

I haven’t watched any decent films this month. I was pleased to see Jumanji, the Next Level could be streamed (Amazon Prime) so we watched it last week, but tbh, it was rather silly. I mean what was I expecting, but the first Dwayne Johnson Jumanji was good, this one jumped the shark. I’m waiting for the film Emma (also Amazon Prime) to come down in price from its £15.99 current price to £4.99.

Yes, on the whole I have dreadful taste (!) but people, the telly I totally adore is the BBC’s Sewing Bee (which we watch on BBC’s iPlayer). Has this programme been sold abroad or do you have a version of this in your country?  This latest season has 12 competitors who for each episode are given 3 sewing tasks, but it’s not competitive, although, of course, one contestant is eliminated every week. Despite that people help each other. A nicer, sweeter programme for these challenging times you could not find.

I hardly ever take pix of my meals but I thought this one so colourful. This plate has on it roast vegetables with tomatoes, spinach, basmati rice and quinoa. 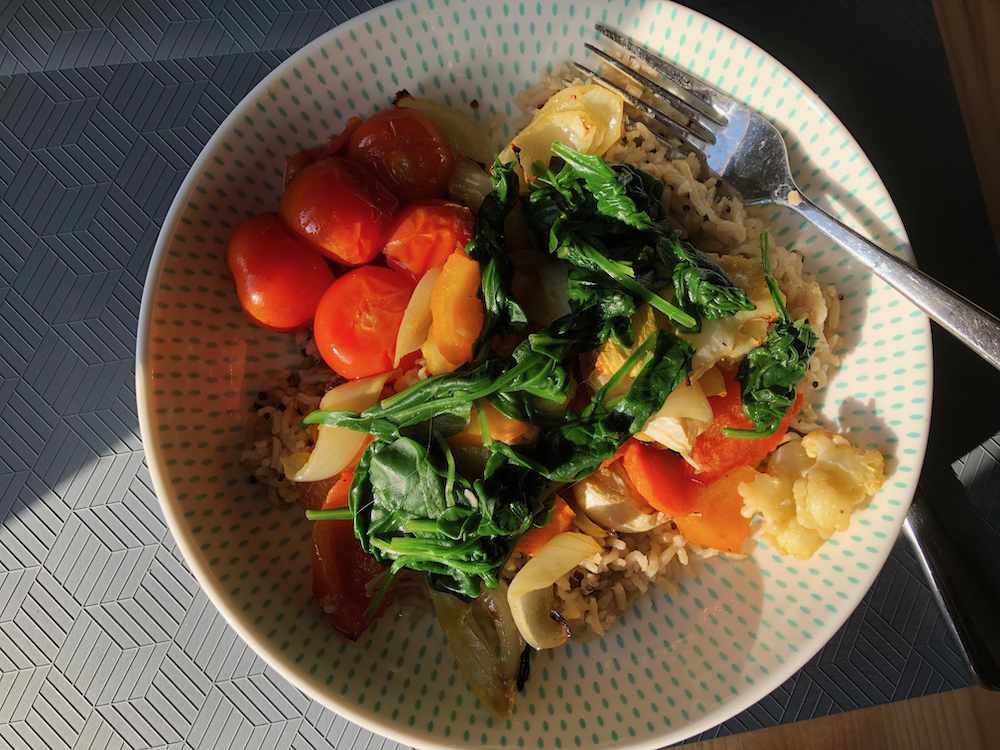 My total respect goes to NHS staff and all key workers.  Around here people are putting up pix of the NHS rainbow in their windows. 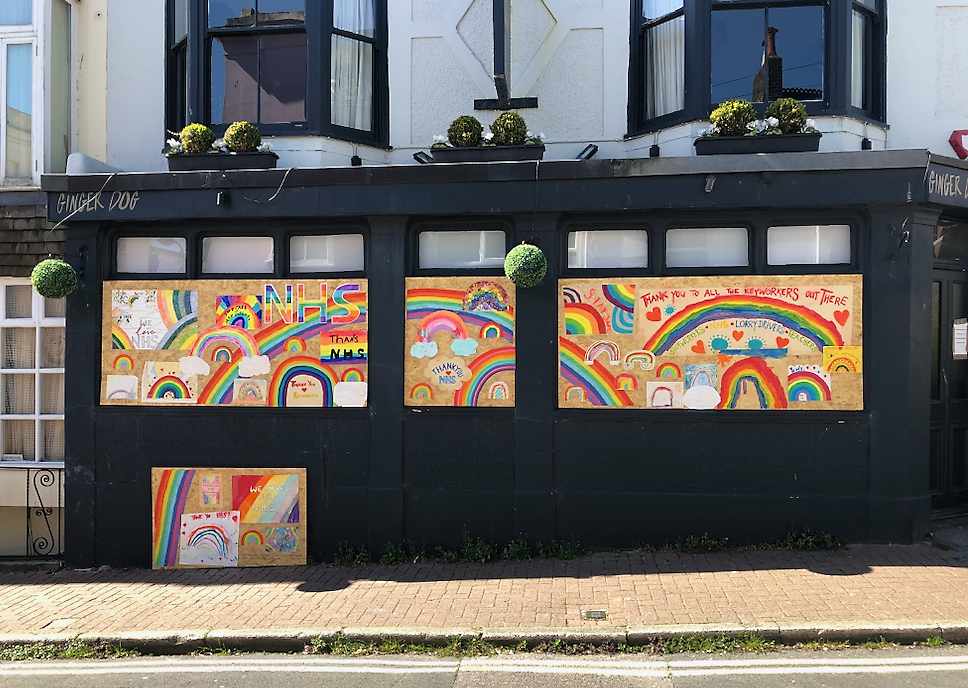 These decorate a deserted pub.  That’s all for now, hope you’re all OK. Keep safe and well.