I wonder how long I’ll be doing a post at the end of the month on what is now my version of lockdown?  Maybe for some time. We’re going to restart visiting family again, I hasten to add, in their respective gardens (which we stopped as there was a case of Covid in our block of flats, which felt a little close) but I have no intention of visiting any of the many places and shops that are open now, nor will I visit any other shops and services, such as hairdressers or the pubs that are opening on the 4th July. To be absolutely clear as to why I am doing this, it is because our government has reduced the UK Alert Level from 4 to 3. Level 4 is the virus numbers are ‘high and rising exponentially’ and Level 3 is ‘Virus is in general circulation’. Well in that case….

I must sound such a killjoy, and I think I might be behaving differently if I hadn’t been ill at the beginning of the year and left with a long road to recovery.  But hey I am recovering and I love my walks by the sea. The two pix below were taken a couple of weeks back and it wasn’t as hot as it’s been recently, hence the deserted beach. 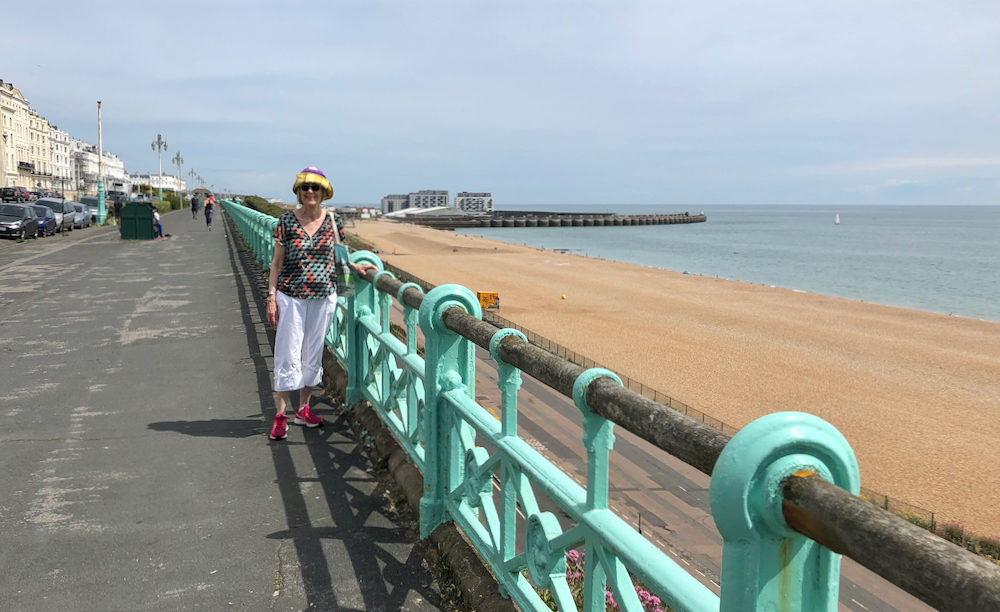 The cropped white cotton pants and a tee-shirt are both old, and they both came from a charity shop! That is the first pic you’ve seen of me wearing thrifted clothes for some time. 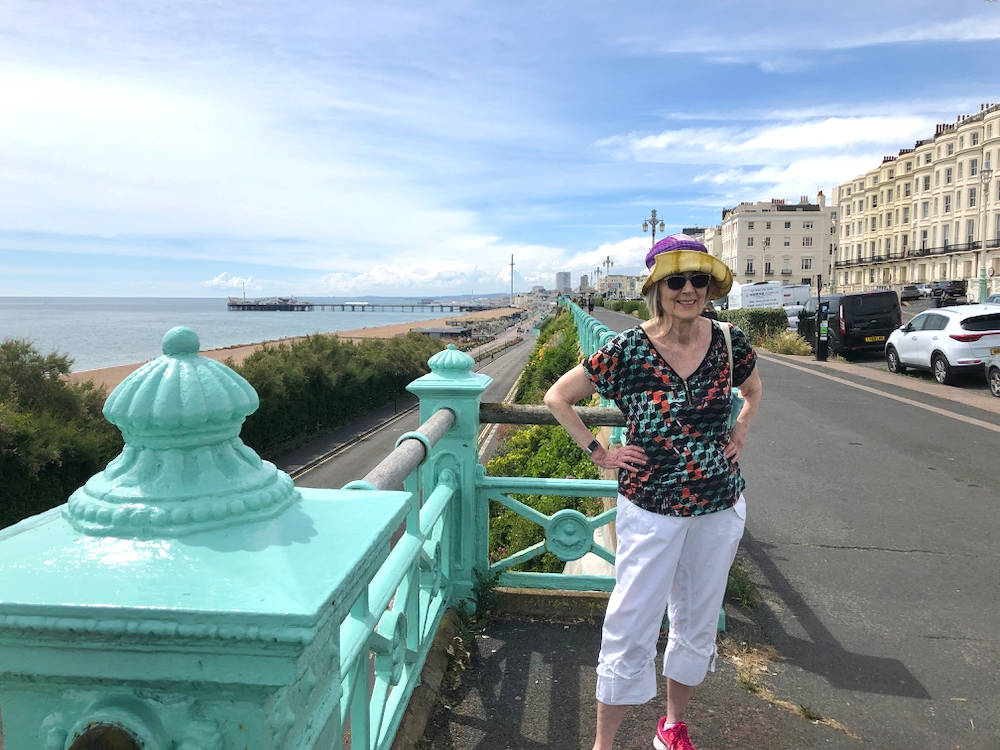 They’re also cool to wear. We Brits are such wimps when it gets hot, or what we think is hot. A few days ago it was super hot for the UK reaching 30C+ (86F) in some parts of the country. The majority of housing in the UK is old and was built to withstand cold winters, the rain and the damp, summer heat was not considered, and probably isn’t now as modern building is all about energy conservation. Consequently, it should be no surprise, even in relatively modern blocks of flats like ours, that we do not have air con in our homes, and on one of the hottest nights, and being on the top floor, our bedroom was an uncomfortable 28C (82F), uncomfortable because that heat is humid. Phew, we didn’t get much sleep. The next day we had a ‘sea fret’ which is a sea mist that rolls in and is a very common occurrence on this coast. As I sat at my desk the hill in the distance was covered in mist and I couldn’t see the tops of some high rise blocks nearby. The thing is that people in London or the surrounding area might have been driving down in the sunshine raring to get onto the beach (oh my word have our beaches been crowded these past few days) but once in Brighton they would be unable to see out to sea because of the ‘fret’.

I’m not going to say much about the government apart from telling you that the message from our leader, that he wants the buzz to return to our lives, has resulted in hordes of people descending on seaside towns (for some reason Bournemouth seems to have had the most visitors) to the dismay of the people who have to clean the beaches after the crowds have gone home. We will take some sandwiches to the nearby Downs and walk there, and I’ll let you know if it is as crowded inland. I think, though, that this problem of crowds descending on to beauty spots and beaches might continue through the summer as a lot of people will be having staycations in the UK. Have you thought of having a holiday this year?  It looks as though travel to foreign climes to places like Spain, France and Greece might be allowed soon, we await a statement from our PM. We might consider a cottage in the countryside, maybe we will and maybe we won’t. Personally, I’ll be watching the stats over the next few weeks.

In the meantime the pots on my little balcony have done very well. I’ve been delighted to see two bumblebees hovering around this pot. 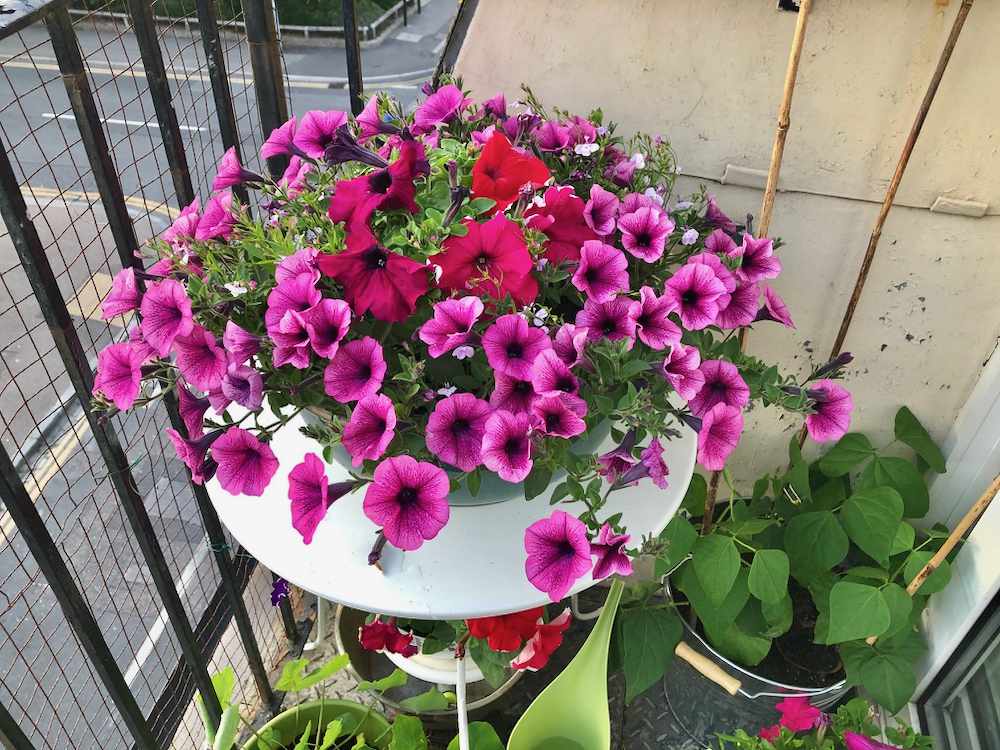 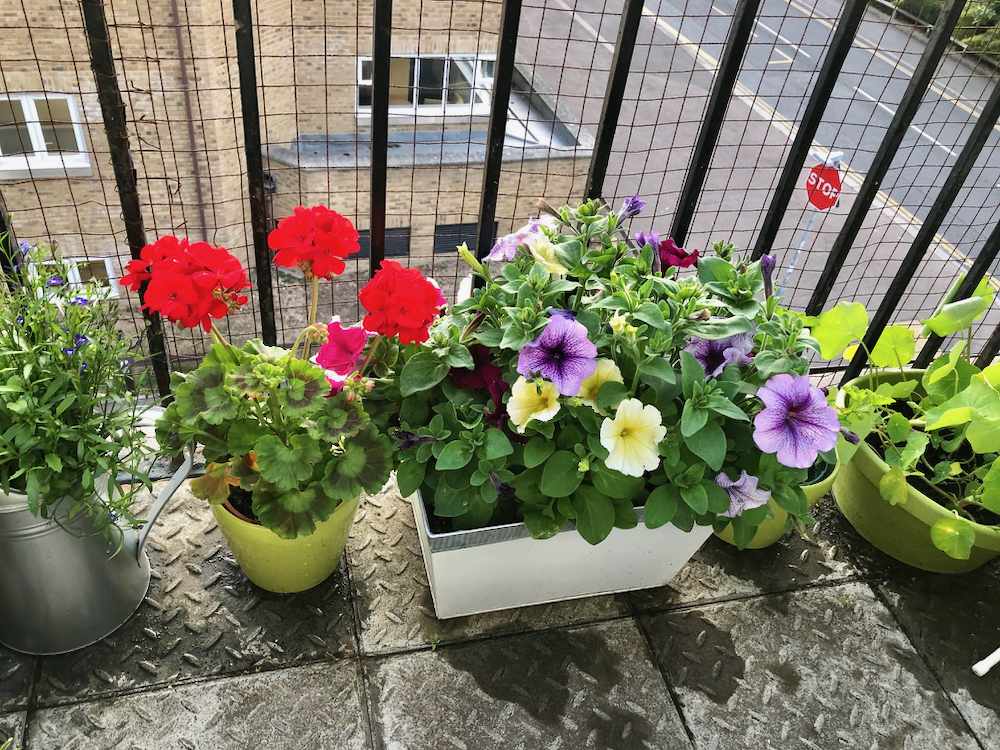 And here I give you a mix of urban weeds and flowers growing on the kerbside by a hot pavement. 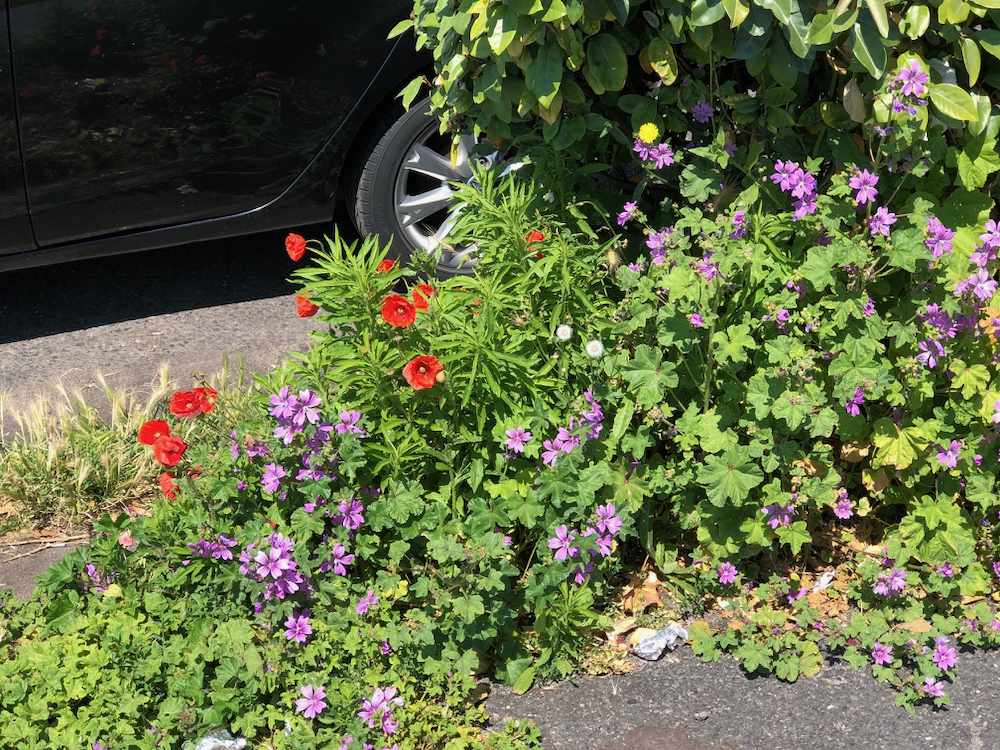 Our routine hasn’t changed much. Both me and Mr F have our projects, which we tackle in the morning. Four days of the week are taken up with our respective hour-long Zoom Pilates classes. Here’s me in my hot weather shorts (M&S) ready for the Pilates class on the hottest day of the year so far! I have to say that I am absolutely converted to online shopping, converted in that I used to avoid it at all costs, mainly because I sent 90% of the purchases back. But so far, I have been very lucky with my recent purchases, which have also been quite reasonably priced.  Once I start going back to the dentist, beautician and hairdresser though, all online shopping will cease and I’ll be back to shopping in a charity shop – my purse won’t stretch that far! 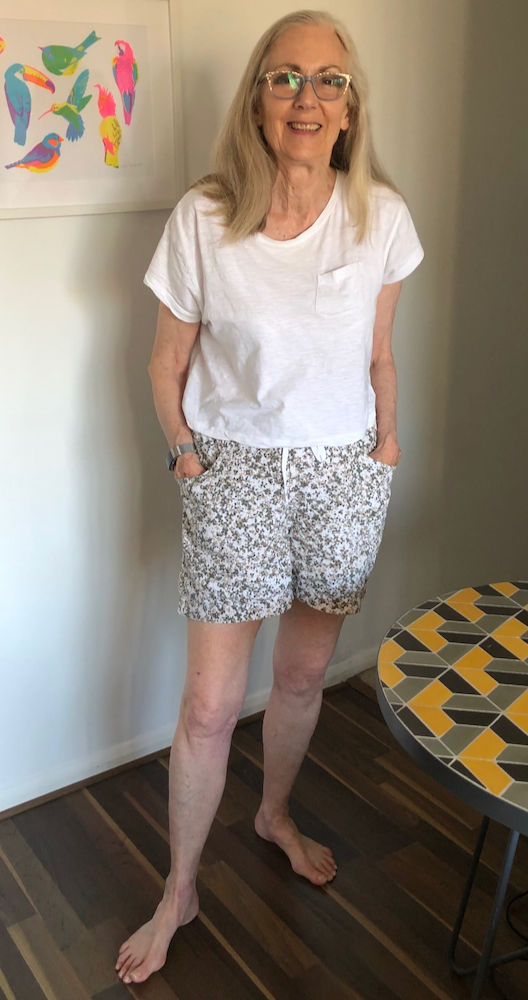 Then it’s lunch and a walk afterwards, a cup of tea and reading in the afternoon and in the evening, I do admit to watching 2 hours of television. Through the month of June, on each Saturday, we watched four really good films. They were: 1917 – excellent; The Godfather – still very good; A Beautiful Day in the Neighbourhood  – just lovely and my best film of the year so far; then Armando Iannucci’s The Personal History of David Copperfield starring Dev Patel, which was excellent, funny, and quite bonkers. This Saturday it was Emma, as the price of this film on Amazon Prime had finally gone down to £4.99. It was fine, and very well acted. But I’m going to dismay some people, because I can’t say I like Jane Austen all that much, and I found this film was one of those dressy-up costume films that I don’t exactly warm to.  As I said the film was fine and many will love it, but it’s not quite my cup of tea!

I am utterly bereft that the Great British Sewing Bee has ended. What a heart-warming, sweet and very creative programme it is. They filmed it last summer so I’m hoping that somehow another series might appear next year as per usual, but there could be several favourite shows missing in 2021. Well, here’s to the programme’s return, which it must, as it is a national treasure. You can still catch this latest series on BBC iPlayer.

We also finished watching The Morning Show(Apple Tv) starring Jennifer Aniston, Steve Carrell and Reese Witherspoon, which was very good. We tried another Steve Carrell vehicle Space Force(Netflix) and found it rather tedious, so that’s a no. Anyone tried the Reese Witherspoon series, Little Fires Anywhere(Amazon Prime)? Is it worth giving it a go?

Other television we’re watching includes The Luminaries(BBC iPlayer) which looks to be intriguing, Alex Rider(Amazon) which is surprisingly good, and Perry Mason(Now tv) starring Matthew Rhys (who’s rather yummy, I think) but it’s a don’t watch to those who abhor violence as it’s a tough watch in parts. Plus, there’s very little resemblance to the original Perry Mason, do any of you remember that one? The earlier Perry Mason was broadcast between 1957 and 1966.  I definitely remember watching it on the one channel of TV that we had at the time.

I’ve finished Vassily Grossman’s Stalingrad. It took me nearly a month to read as it is a gigantic, colossal tome, and as I thought contained a whole universe. The writing, his prose, in describing one of the worst Stalingrad battles around the railway station, for example, was extraordinary and sublime. I will have to read it again and quite soon, maybe in a couple of years. Am settling down to read Ann Pratchett’s The Dutch House, which is going to be a good read.

I promise to not talk about Covid-19 or say anything about the government’s handling of it for another month, but overall, I think there is an uneasy acceptance that lockdown is loosening. I also realise that my take on lockdown, and the way I’m living is extreme and that it is so important for small businesses and those whose jobs are on the line to get the economy working, but take care people, take care.

And finally, to show you how fast the weather changes in the UK, yesterday walking towards the seafront I had to hang on to Mr F or I would’ve been blown off my feet it was so windy!  From one day to the next we can go from hot to cold and from gentle breezes to a howling gale. Here I am  literally hanging on to my hat and the rail! 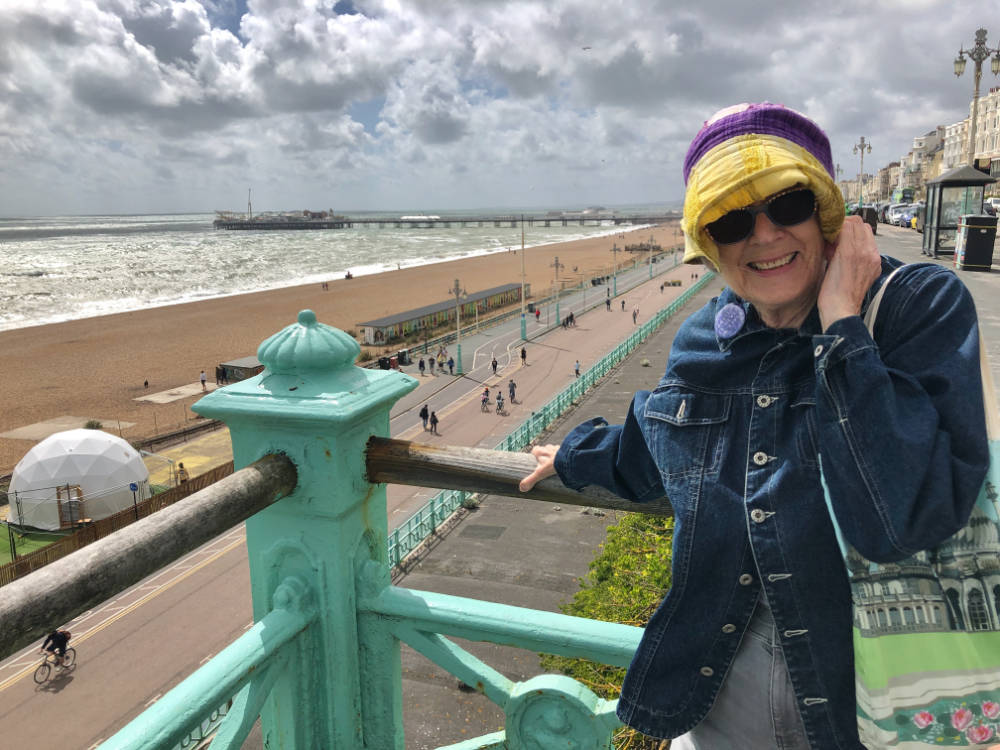 That’s all for now, thank you so much for reading this post.