And here we are, almost another month gone from this year. Are you finding that the weeks and months pass quickly? I am, and not sure why but the days do tend to blend in and merge together and there have been a couple of times when I have woken up on a Monday and wondered whether it was Tuesday! So if this totally s..t year is moving fast to its end – good.  But on t’other hand we don’t want to wish our lives away, do we, especially, people, when we are in our 70s. We need to live our lives and be fulfilled and happy. Now that last word must sound trite, so instead of being ‘happy’, I’d say what keeps you going, what keeps you motivated, what keeps you sane during this very, very odd and trying year?

As you know I’ve found that a good routine is helpful, plus having the live Zoom Pilates classes, these give structure to our day and the week. Then for me, it’s the writing (which I do in the morning) and the communication and connection, which I feel I have with all of you, and that includes those who do not comment, because that’s fine, I know you’re there.  And, of course there’s the connection with our children (in their 40s) and our friends. And although we’re sadly pulling back from seeing people in their gardens the emails/phone calls and the Zoom coffees can continue. And apologies if you’ve heard it all before, you know, a routine, Pilates and ya de ya de ya, but I do sometimes feel as though I’m living through a series of ground-hog days with no trips to London to report or holidays to go on! Never mind, fresh air and our daily walks by the sea are a lifeline. 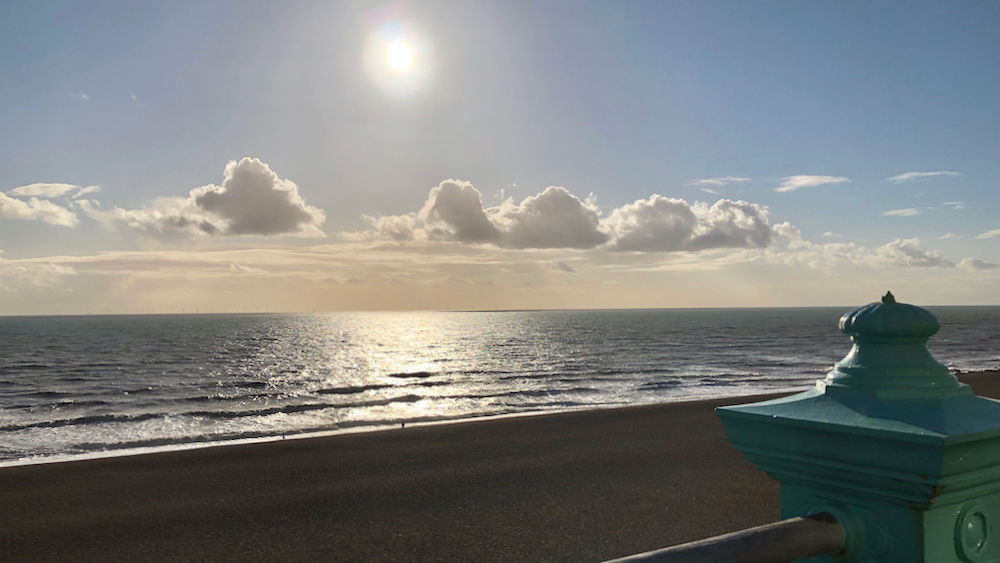 However, I have some ideas and plans re: holidays for next year. Come what may, I will book a holiday in a cottage somewhere quiet, vaccine or not, as we simply must get away.  But only when there is, once again, a dip in the stats so that won’t happen until we’re well into 2021.

Yes, cases are going up in Brighton & Hove, so what keeps me sane and smiling? Only a couple of weeks ago I spoke about resilience and paying attention to the moment. But what I’m saying here, is what is it that will help you as we move into these winter months? For me it has to be the connection with family and friends, which is going to be mainly, now, via various IT methods. But I also get a smile on my face, through, and yes, I am that shallow, fashion, or if not exactly fashion, it is clothes, the ones in my wardrobe and the ones I find in the two charity shops I go into – they’re very safe with compulsory masks and only 2-4 people allowed in at a time. Yes, this keep me smiling.

Here are my two latest finds both found in the same small charity shop that is just around the corner from me. 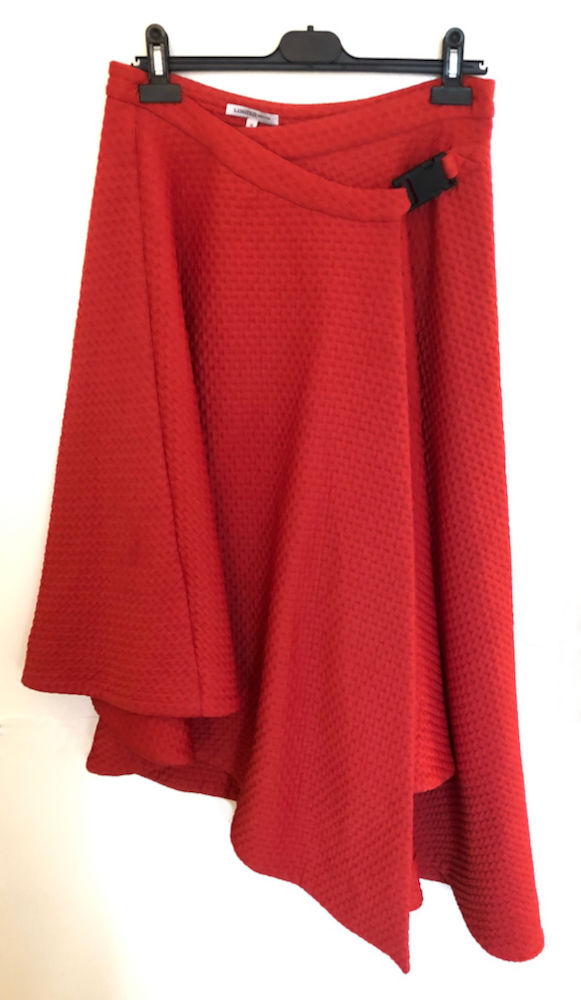 What about that for a pop of red! 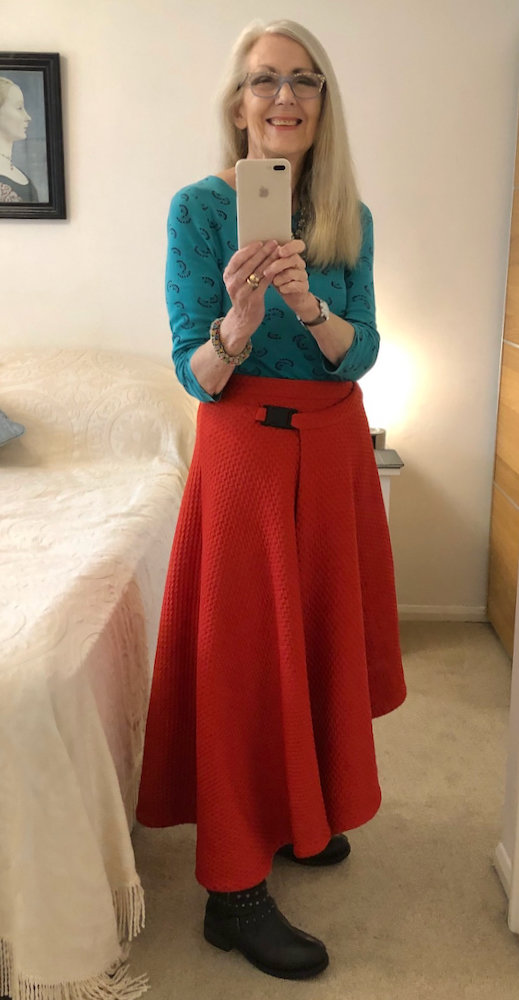 Here I am wearing it with a very old Peacock’s top.

And then I saw this. 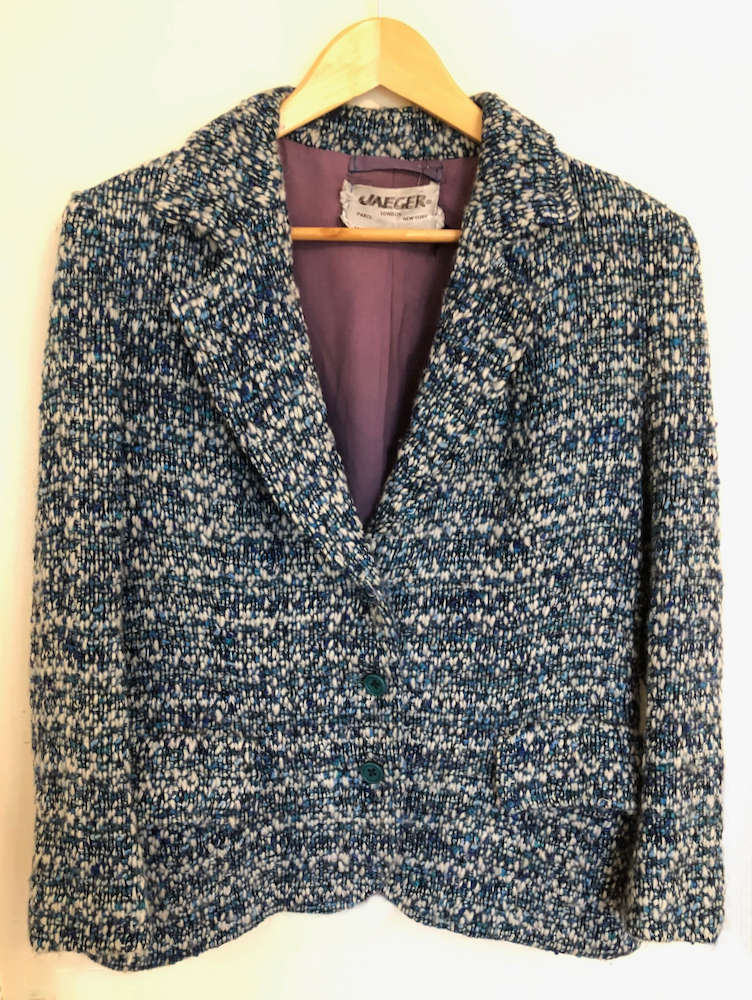 Can you see the label, it’s a Jaeger jacket! Wow, what a find, it’s all wool and quite heavy with it. This jacket, I’d say is vintage and a bargain at £15. And hey, in this day and age, let’s be colourful!

I love skirts and am really excited to tell you that I’ve joined in with Gail of @is_this_mutton_ and the #7DaySkirtChallenge which she started on Instagram. This skirt will feature as #2/7. Are you on Instagram?  It’s a funny old place and I don’t take it seriously, but the thing about Instagram and any social media platform is that you make your space as safe and as nice as yourself and your friends. To do this I have made my account private and within that walled-off space I am surrounded by a great community of women who love their clothes, so actually I should go on there more often, and maybe I will now with this challenge because I am finding it such fun, and people, fun is what we need these days.

Last pic of the outfit below where you can see more clearly the necklace I found in a French bricolage shop and bought for 5€. 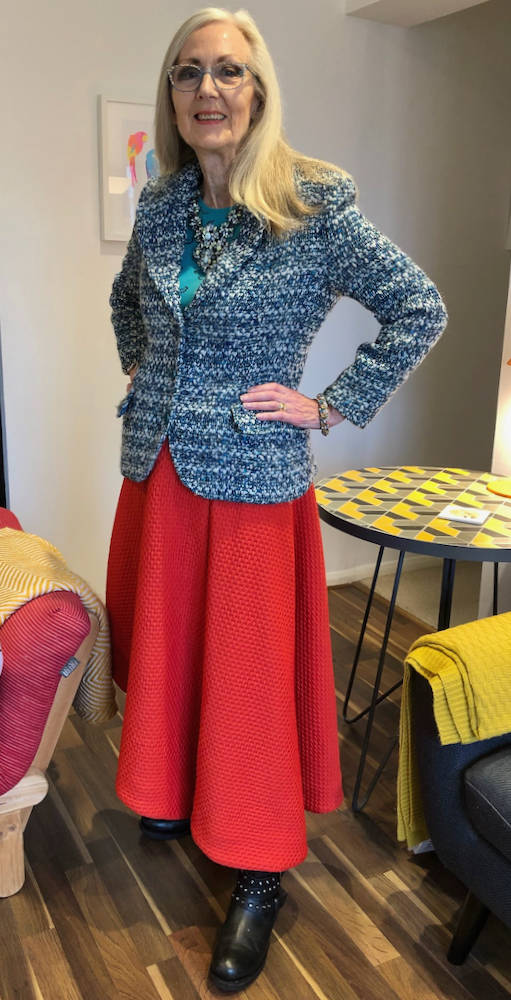 What have I been watching and reading?

We’ve watched 5 films this month, two of them, were the first and second Jason Bourne films. They were OK, there’s plenty of pace, and they’re efficient films, and you know what to expect. I kind of enjoyed them, but then again, they’re not exactly fun, in fact I thought Matt Damon rather soulless and wooden in his role. Funny how popular and successful actors can become, when really, are they that good?  I don’t recommend.

But there are 3 films I do recommend. The first was Get on Up (Netflix) starring Chadwick Boseman as the singer James Brown. Gosh, what a blow to have lost Boseman so early, I was so sad and shocked when I heard of his passing. He didn’t make all that many films, but they all showcase how good an actor he was – he simply lives the role of James Brown and I do recommend. Another great film which I highly recommend was The Trial of the Chicago 7 (Netflix) which depicts the true story of how 7 (at first it was 8) activists including Abbie Hoffman, Jerry Rubin and Tom Hayden were charged with conspiracy and crossing state lines to incite riots at the 1968 Democratic National Convention. I was vaguely aware of the trial and its result but did not know a great deal of the context. The film is intelligent and actually quite funny, and Sacha Baron Cohen steals the show as Hoffman – well worth watching. Another excellent film was an old one, it was A Bridge Too Far (Amazon Prime) and it tells the story of the 1944 failed invasion of the Netherlands by the Allies known as Market Garden.  I don’t know what you think of watching war films, but this one is good, very good in fact, and what’s more it is an ensemble piece with so many stars in it, too many to name, and all of course, looking so young as the film was made in 1977. Despite being that old the film’s production values are as good as todays and it holds the attention throughout – highly recommend.

Reading: I finished JG Farrell,’s The Singapore Grip which I thought excellent. It is a far more subtle and a far deeper exploration of war and Empire attempted by the recent televised version. And then I’ve read one book (Patchett’s Commonwealth) and am halfway through another (Jessie Burton’s The Confession), and I’m sorry to say despite being very well written I find/found them a bit frustrating. I don’t know why, because as I said they are well written – so don’t be put off. Is it because I just cannot be doing with domestic life and marriages that go awry?  I guess I like larger themes; of war, and Empire, yes, that’s more my kind of book. Give me a Hillary Mantel or JG Farrell any day, basically I think it’s because I just can’t do light literature – and apologies to all who do but hey let’s embrace our differences!

Watching on TV: Finished watching The David Hare series Roadkill starring Hugh Laurie (BBC iPlayer) It was good up to a point, but predictable, and have started The Undoing (Now tv) with Nicole Kidman and Hugh Grant, which is worth watching for Hugh Grant alone, what an actor, he’s like a maturing very good wine.  We continue to watch Life (iPlayer) but am finding it a bit miz, again, there’s rather too much domestic angst in it for me.  To brighten our lives we watch anything with Michael Palin, sorry overseas readers if you can’t find it as it’s on BBC iPlayer, but there’s always, Schitts Creek, on Netflix. Oh what a delight this is. For a long time we avoided it as it sounded, to a Brit’s ears, as rather too much for us. I mean why would a very rich American family on their uppers be any good? Yet why was it always winning awards? Well, give it a try, it is just wonderful. Funny, witty, and in a way, totally innocent and a breath of fresh air. We are still on the 1st season and have several seasons more to keep us going – exactly what we need for the coming months!

That’s all for now, but do share how you keep a smile on your face in winter, so interesting to hear how others lead their lives.