Hello again and, my word, another month has passed.  Do you find the days going by quickly?  I do. I have to say most of the time I’m busy with projects and the blog, and happy to be in contact with friends and family via FaceTime and WhatsApp.  But every now and then I catch myself thinking of what might have been, or what should or could be happening.  We are still very uncertain as to whether we go on holiday this year, obviously, within the UK as I wouldn’t fly if you paid me.  I can tell you once this is over, I won’t be saying we can’t afford this or that (when considering a balcony cabin on a cruise, for example) because, really, live in the now people, enjoy that holiday and break in the sun while you can. Because, you just never know when life can go totally t..s up as it has done in 2020!

Actually, towards the end of my walk I often sit on a bench and look through the railings at the sea. 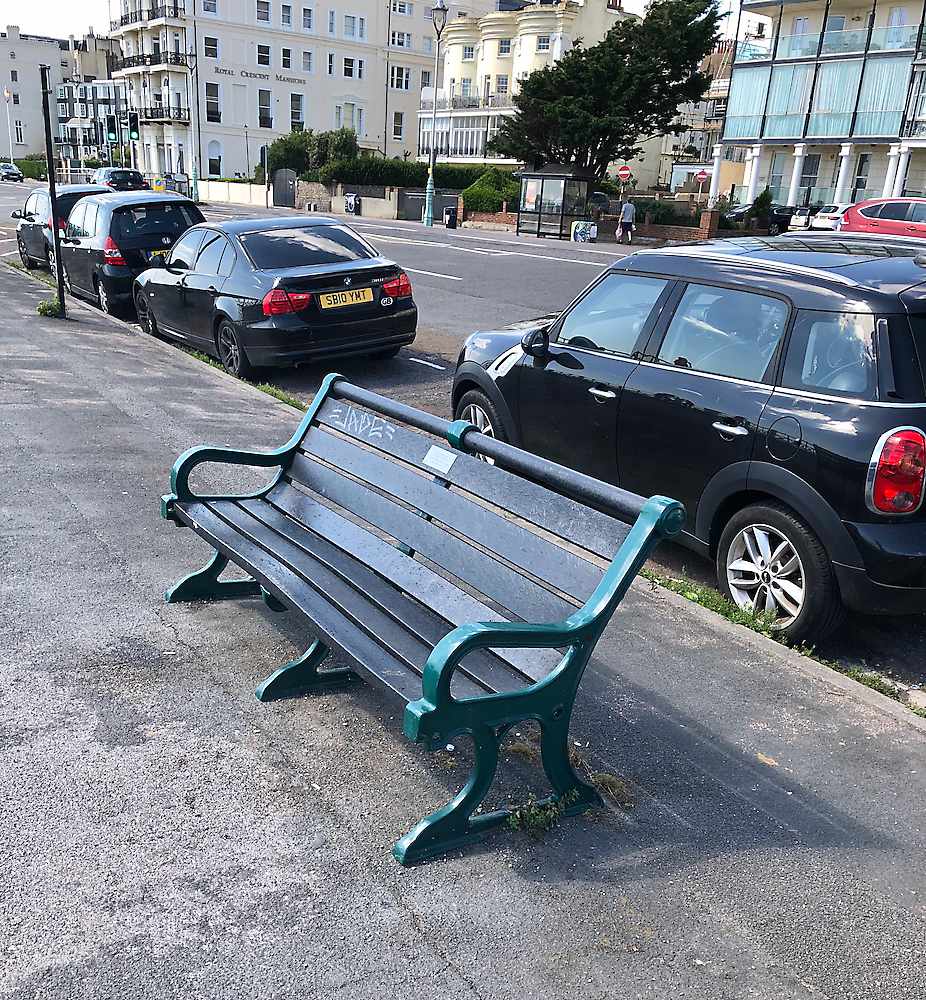 And just for a moment I feel as though I’m on a cruise. 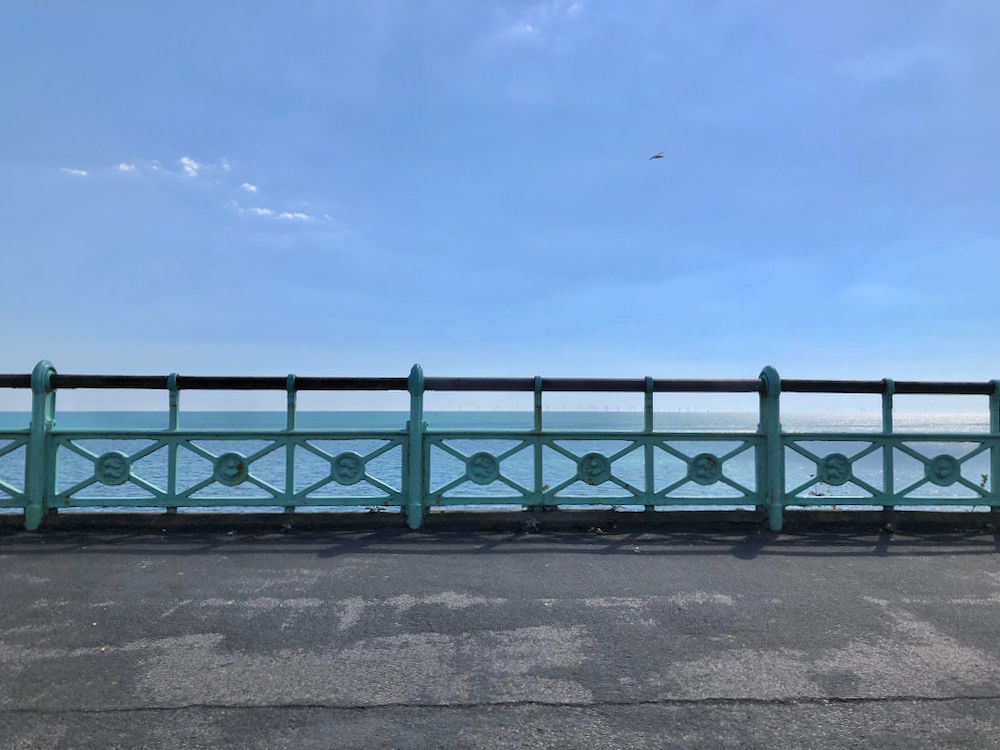 Here I am on another day wearing an old dress with my white tee, still wasn’t quite warm enough to go completely bare-armed. 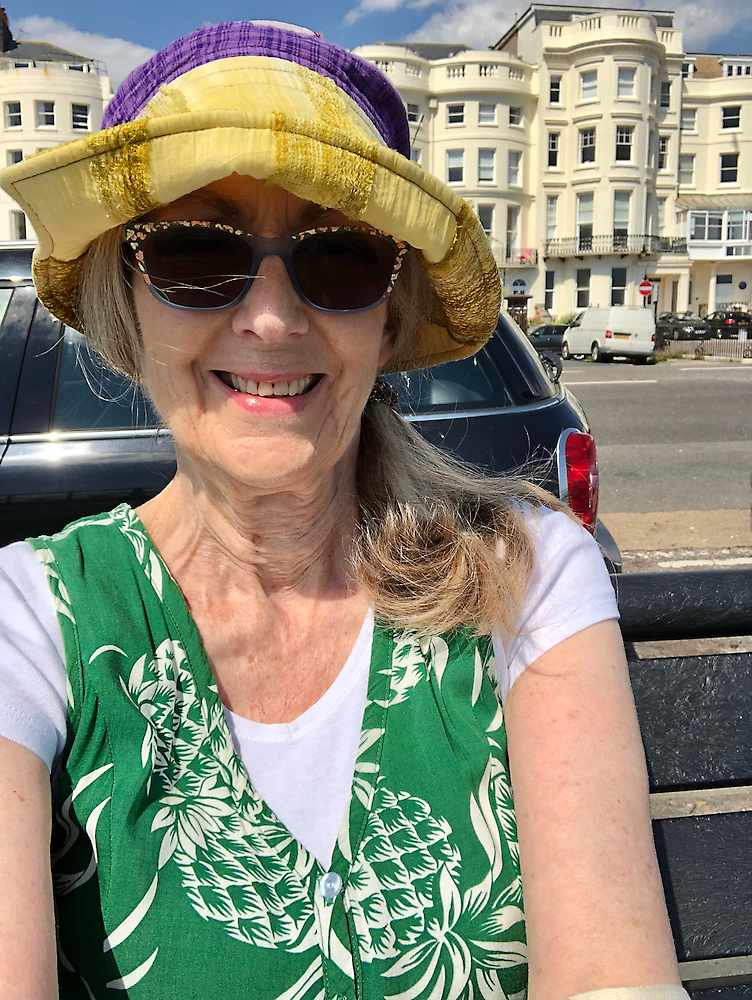 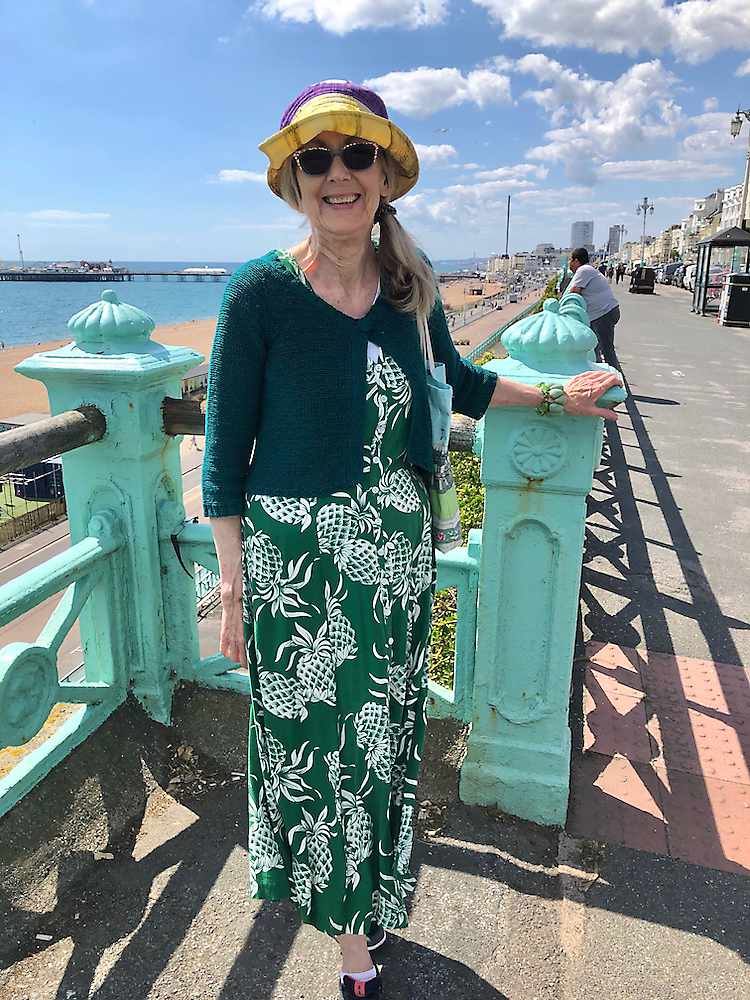 I see from the photo that I’m standing up straighter than a few months back when my core had collapsed what with one thing and another. That’s a favourite phrase from the Kermode & Mayo podcast on films. Do any of you listen to that?  I’m a long-term listener and they’ve valiantly continued throughout the pandemic talking about films despite cinemas not being open.  If you love films do have a listen, but they’ve been doing this for so long they kind of bicker (or ‘witter’ as they like to call it) about all and sundry, and especially music. It’s very entertaining although there are lots of in-jokes. If you’ve ever heard anyone say at fairly inappropriate times and places ‘and hello to Jason Isaacs’ that’s where it originated. Anyway, the twice weekly Pilates has helped a lot with my posture, but I can still see the extra inches that went on after weeks of inactivity and months of Christmas Cake (December and January) and Hot Cross Buns (February through to April) plus the biscuits and a hot drink before bedtime. All cakes and biscuits, and my flavoured (i.e sugary)dessert yoghurt are now banned!

So what has this month brought you?  What have you done now the lockdown is eased?  We’ve now visited both our children in their respective gardens, and last Sunday we went to friends for a Sunday lunch, which was bliss and such fun. I wore lots of layers though, jeans, vest, top and jacket, as the previous Sunday I’d worn a dress for a garden visit and froze. And on this day even with the sun shining, there was that typical south coast breeze keeping us cool.

Two days ago I ventured into our local bakery – yay! It only lets in 2 people at a time so that was fine. Yes, I’ve decided that wearing a mask (of course) I will return to the little shops nearby because, despite living in a city, the area I live in is like a village with small, independent shops such as a butcher, a baker and a deli. It also has two charity shops and I haven’t gone into any of these yet, but last week I visited Emmaus in Portslade, which has a wonderful vintage and pre-loved clothes section called Outfit@Emmaus. 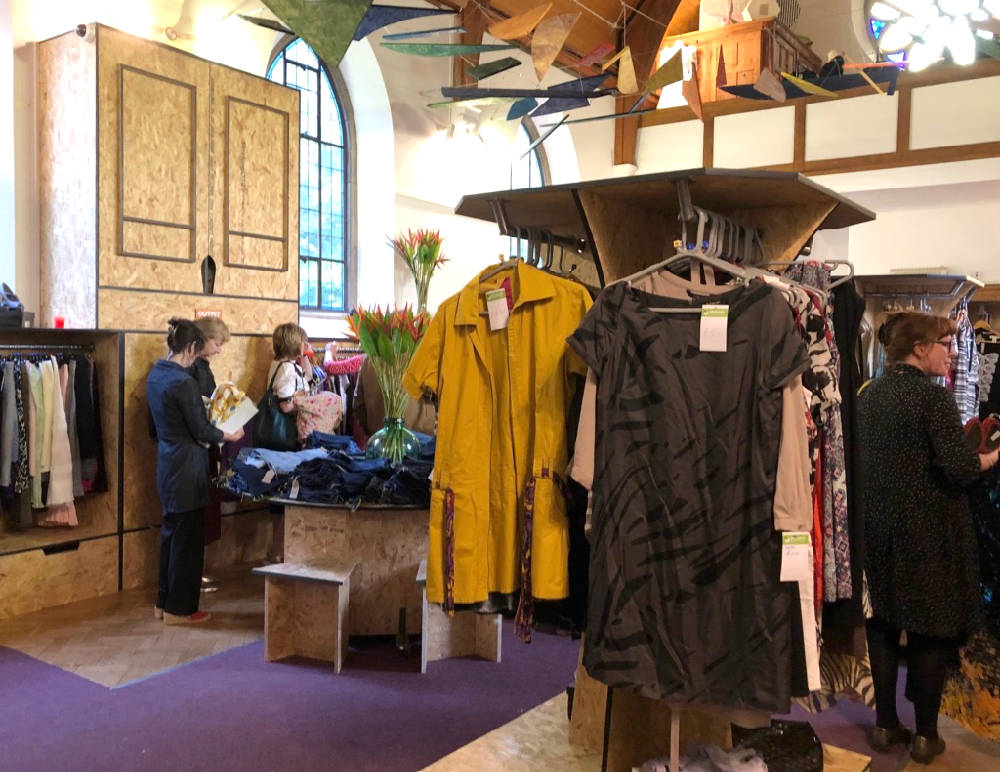 That is a photo taken last year on its opening night and a more stylish place for hunting bargains you could not find. Originally a chapel you can also see how spacious it is with its high ceilings. You probably know that Emmaus is an international charity set up in 1949 by a French priest, Abbe Pierre, to support the vulnerable and the homeless who, together with volunteers and paid staff, run income-generating activities at a local level. So I shall go again as it is such a good place to support.  And the clothes are fab! 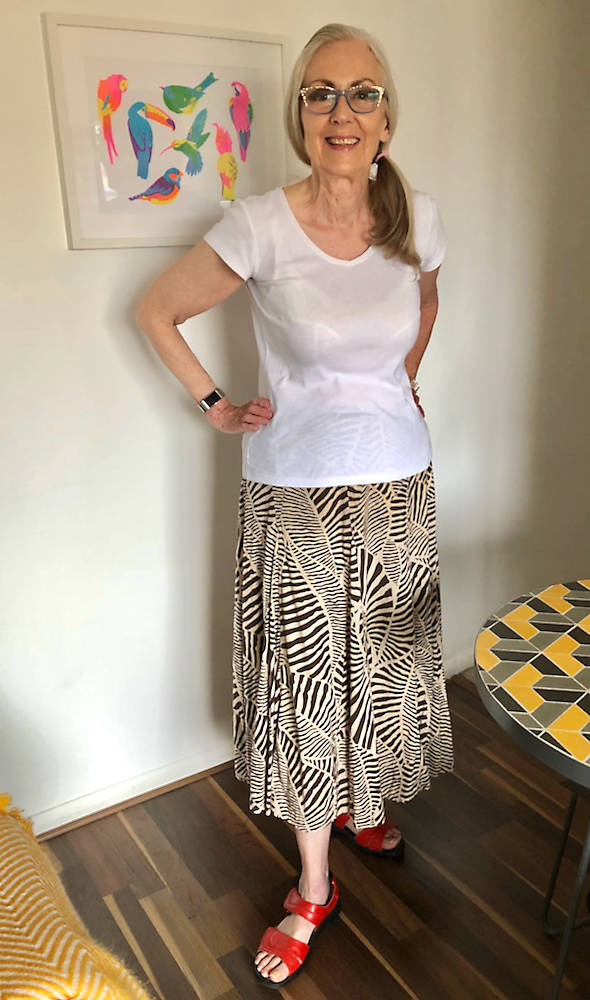 I also bought two dresses to be featured soon, and a long white blouse/shirt (£4) which I’ll style a couple of ways in yet another post. Noting that these four items cost me a mere £18, I realise just how expensive my lockdown practice of buying new clothes online has been, and I have vowed to cease that activity! Every time I feel the slightest urge I shall instead set aside an afternoon to pop over to Emmaus for a rummage – it makes sense, particularly financial sense.  And just look at the quality of that skirt, it’s 100% cotton and will be fab in the hot weather.

As well as listening to the Mark Kermode & Simon Mayo podcast, we have been watching lots of television and some films. However, the films watched in July were not as good as the ones we watched in June, and that includes a Tom Hanks film. After saying that A Beautiful Day in the Neighbourhood was excellent and perhaps the best film I’ve watched all year, I was so disappointed with the Tom Hanks vehicle, Greyhound (Apple TV+).  And I say Tom Hanks vehicle because it was just a teensy bit self-indulgent with Tom Hanks writing it, along with producing it and starring in it.  Look, I love a good war film set on the sea, give me The Cruel Sea and I’m happy. But this? It was OK, but nothing came of it, apart from a ship chasing submarines. There was no plot development and no character development so yes, do please, give me The Cruel Sea, which is a far superior film.

Slightly better than Greyhound were two films starring Charlize Theron, the first being Bombshell (Amazon), based on the true story of the sexual harassment case against Fox News. It’s OK but I preferred the television series The Morning Show (Apple Tv), not based on the Fox News case, and better in its character and story arc. Then another viewing of Charlize Theron came from The Old Guard (Netflix) and really not bad. We enjoyed it as it was a couple of hours of escapist nonsense of 4 ancient people guarding humanity being joined by a new recruit. Are your eyes closing in boredom! The thing is we found it a well executed and quite exciting film, and good fun, so we give it 4 stars! Finally this weekend we watched Radioactivity (Amazon Prime) which is a biopic of Marie Curie’s life. Sadly, it’s not a good film – so it gets 2 stars! Btw, if you’re thinking why allocate the stars and who am I to do so anyway? For over 6 years now I’ve been writing down every film we watch in a little black book with the date and its name, actors and star rating. So it’s like second nature to me to say how many stars a film merits.

Alex Rider (Amazon) Finished watching – surprisingly good. I thought why would I be interested in a teenager becoming a spy but it was excellent.

Cardinal (BBC iPlayer) Finished watching – good but a bit grim. Very noir and set in Canada instead of Norway/Sweden.

Perry Mason (Now tv) Thoroughly hooked.  Excellent but don’t watch if you don’t like that particular type of down-beat and quite violent American detective series.

I May Destroy You (BBC iPlayer) We resisted the hype but started watching to see why it was so lauded, and have watched 4 episodes. Was it overpraised?  No, it’s really excellent, but don’t watch if you’re squeamish!

Mrs America (BBC iPlayer) Watched one episode. A bit glossy but interesting. I think I might get very angry with that Mrs Schlafly played brilliantly by Cate Blanchett. Oh my word, if it had gone the other way…..

The Norseman (Netflix) On the recommendation of Gail of Is This Mutton writing about her favourite books, films and tv, we’ve watched a trailer and it looks to be good fun. It’s the Norwegians taking the p**s out of the Vikings. Only half an hour long we shall watch when we need a laugh, which is quite often these days!

We’re also watching two documentary series: Once Upon a Time in Iraq (BBC iPlayer) which is very good and rather devastating.  And The Murdoch Dynasty (BBC iPlayer) ditto, in that it’s very well executed. Gosh, what a family, what a man, and rather sickening to see power win out as it always does. Very watchable though.

After reading Stalingrad, I rather needed some light relief and turned to Nina Stibbe’s Love Nina. Yes it’s light reading, but so very enjoyable.  The whole book consists of letters to her sister written in the 1980s when she was au pair to Mary-Kay Wilmers. What’s so special about that? Well Mary-Kay Wilmers was editing the periodical London Review of Books then, and now. I regularly read the London Review of Books and love it, and hearing about Wilmers life gave added meaning to the book. But the letters from this young under-educated girl are superbly naive and so very funny.  She’s a published author now and how amazing and fortuitous was it that she managed to fall into Wilmers’ household who quite obviously influenced her.  And what a household!  Alan Bennet in the 80s lived opposite Wilmers and seemed to eat supper with them nearly every day. Stibbe puts the dialogue of many an evening meal into these letters and what with Alan Bennet (and others) present, it is simply hilarious.

That’s all for now, I leave you with another photo taken from my walk. 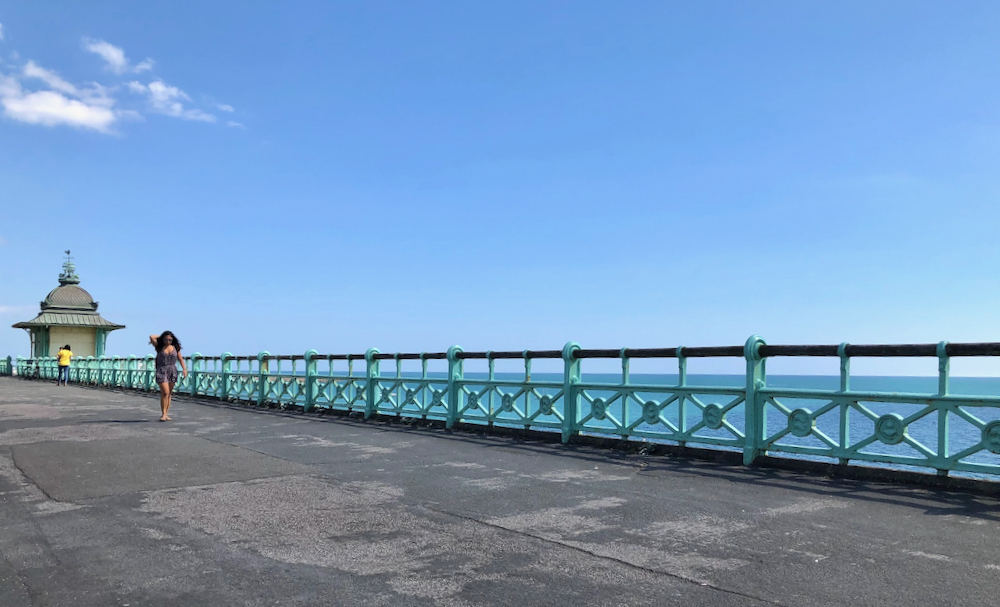 With love Penny, the Frugalfashionshopper