Sorry, been very busy with this and that, so there wasn’t a post last week. Well, there wasn’t here, but I did put a post on My Other Blog. The thing is, I hold strong views on Brexit (nope), refugees (we, as in the worldwide community, are not doing enough), the Labour Party (I love it some of the time, but definitely not all of the time) and the NHS (we all love it most of the time) and not everyone will agree with what I say. But I set out my views to make things clear to myself (very necessary) and then to communicate and connect with others, and especially those who don’t agree with me. That’s the whole point, to get out of our little huddles of people agreeing with each other. But this latest one is on the NHS and kind of non-controversial as I unpick some developments that are in the ether and gearing up to happen.  It’s a post that will have a follow-up or two, or three, as I feel passionately about the NHS, but it does need a re-think but not in the way the policy wonks would have it.  I feel there’s a clue in its name, the National Health Service and there’s a need for more of an emphasis on the middle word.

The other thing that took up my time, apart from attempting daily exercises and only managing every other day, and then missing two days because… I went up to London again!  These trips are getting to be quite a habit. Actually, I’m doing it while I can, as it’s really tiring to do, not helped by the trains.  I thought moving to Brighton would ease my journey to London, but not while we’re in the midst of a great timetable fiasco, which if you live in the UK you’ve probably heard of and/or suffered under. Outside the UK, in a nutshell, nearly every train line company in the country has a new timetable with new routes and they didn’t factor in the training for these new routes. The result, chaos. This was compounded on my return journey with a fire on the line, with massive cancellations. I stood with an anxious crowd waiting to hear announcements. One came in and I managed to scramble to the head of the queue at the door of the train, got on and got a seat.  As we moved off I heard the cry ‘can you move down the carriage’, looked back and it was like a train in Japan. And it remained that way for 2/3 of the journey. I saw people in stations, especially Clapham Junction, but also further down the line (which is unusual) running up and down platforms looking for somewhere to push their way in to no avail. No wonder people cling to their seats with a grim determination and never stand up for anyone – why would you in those conditions? This is a very first world problem, but even so I don’t envy those commuters.

Enough of that, my day was great. And the trip was to that wonderful Victoria & Albert museum, again, to see the amazing Frida Kahlo exhibition. 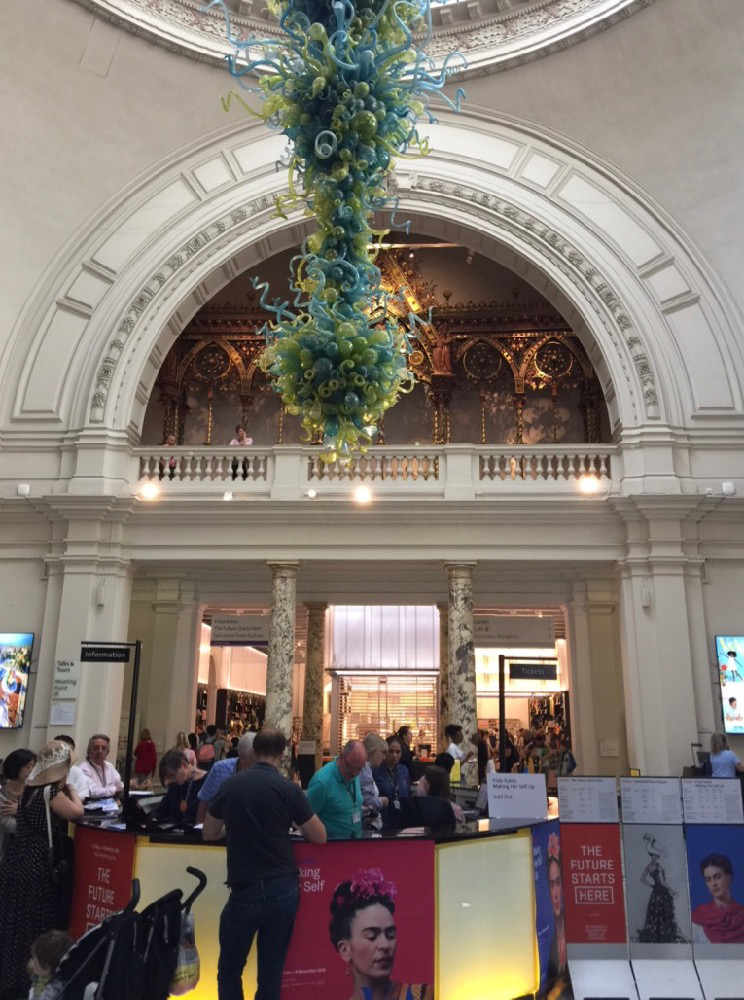 I’d read a slightly grudging review that this exhibition didn’t focus enough on Kahlo’s art and instead was rather more about fetishising her disabilities.  But on seeing this exhibition, that’s such an unfair depiction of what is on display, which is actually not about her art but about a room in her house that had been locked for 50 years. Anyway, I’d been to the Tate some years ago and seen a Kahlo exhibition that showed all her glorious art. This was different. The exhibition revealed the contents of this room: her makeup, her jewellery, her medicines, and yes, her corsets and her false leg in the red boot. And then there were her clothes, her clothes. 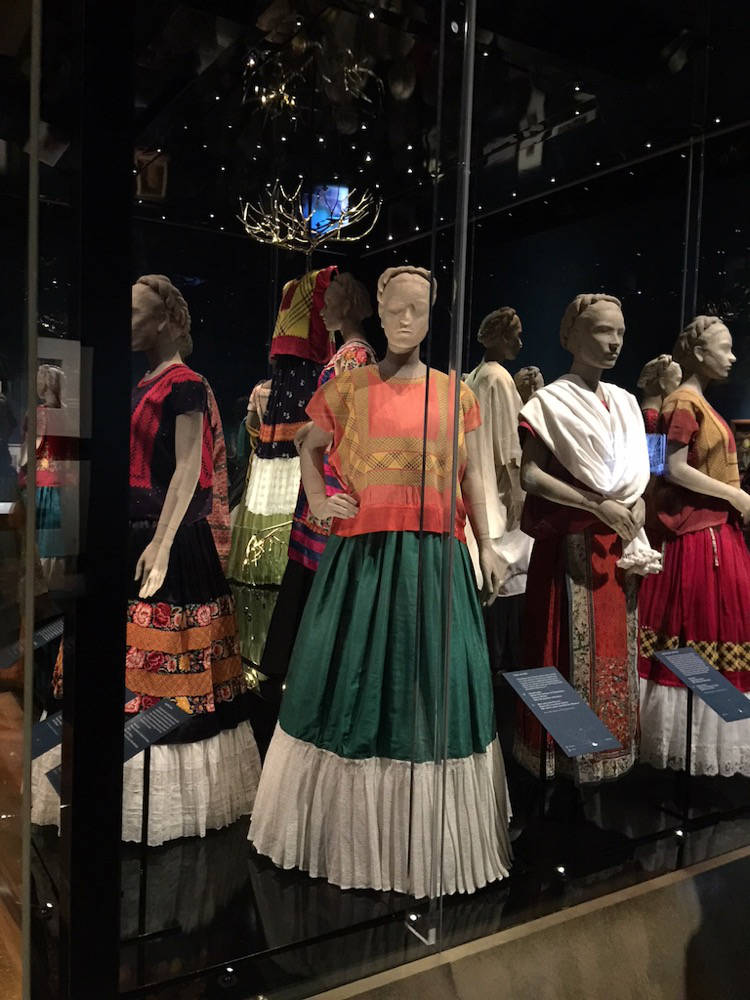 But in addition, there were many photographs, letters and stunning, stunning paintings. 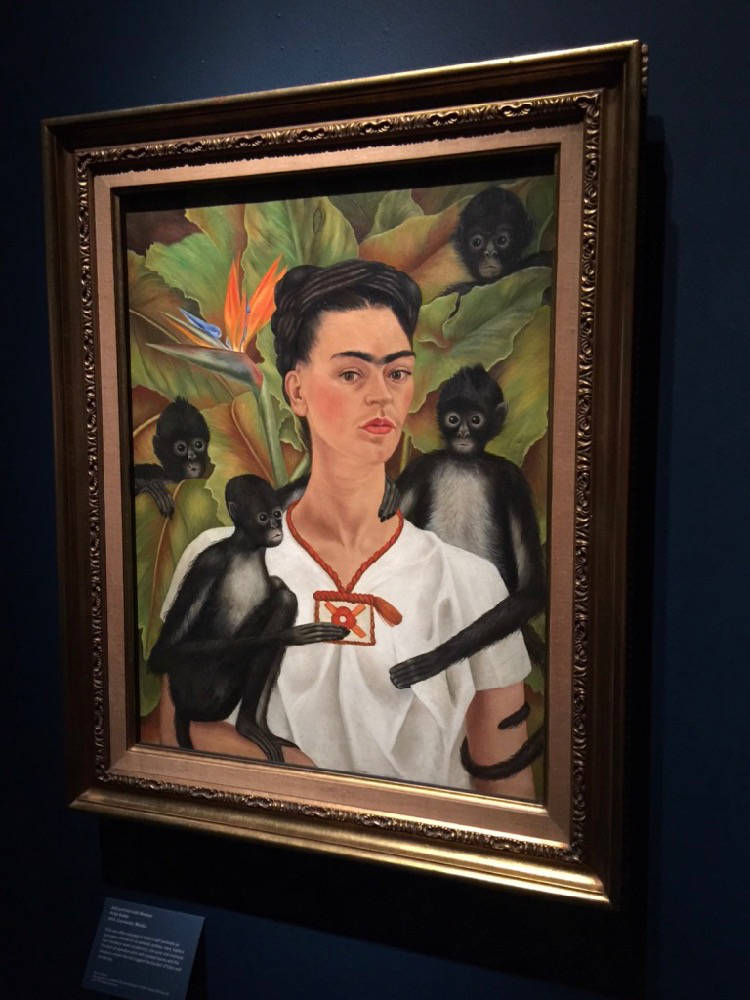 The exhibition wasn’t at all voyeuristic: it was beautiful and sad, and colourful and astonishing and ravishing and made you think about the life she led amidst all her pain and suffering. 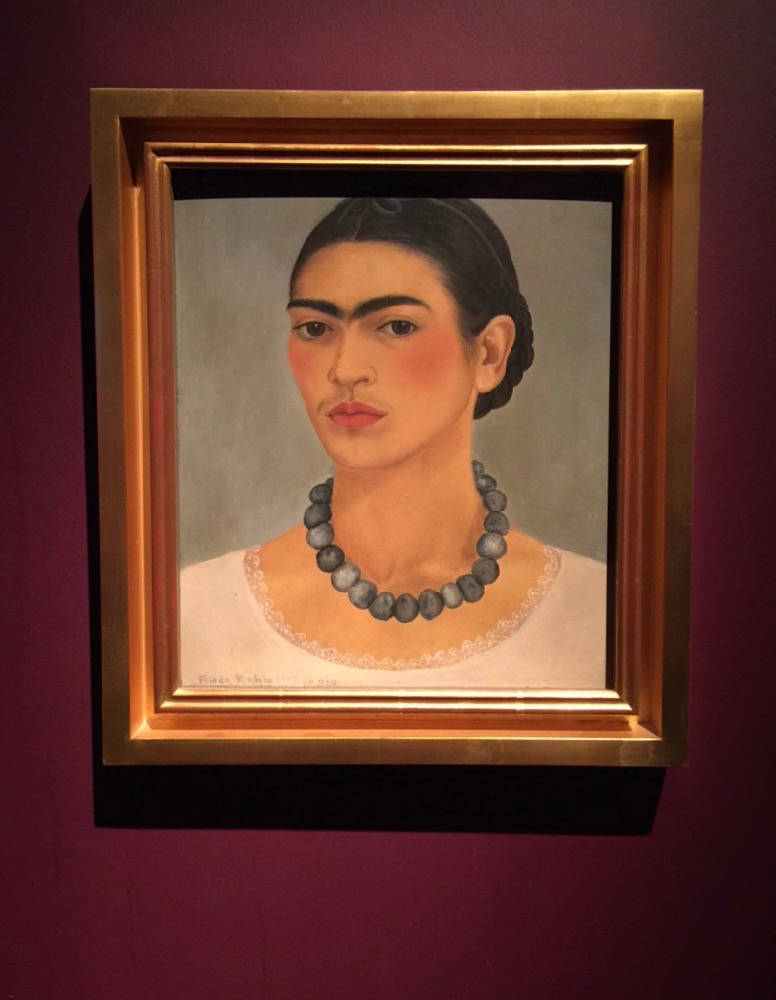 Do go if you can!

As you know I’ve got a certain style for Brighton, but I decided to honour Frida and wear slightly more colourful clothes. Here’s me getting ready for my trip. 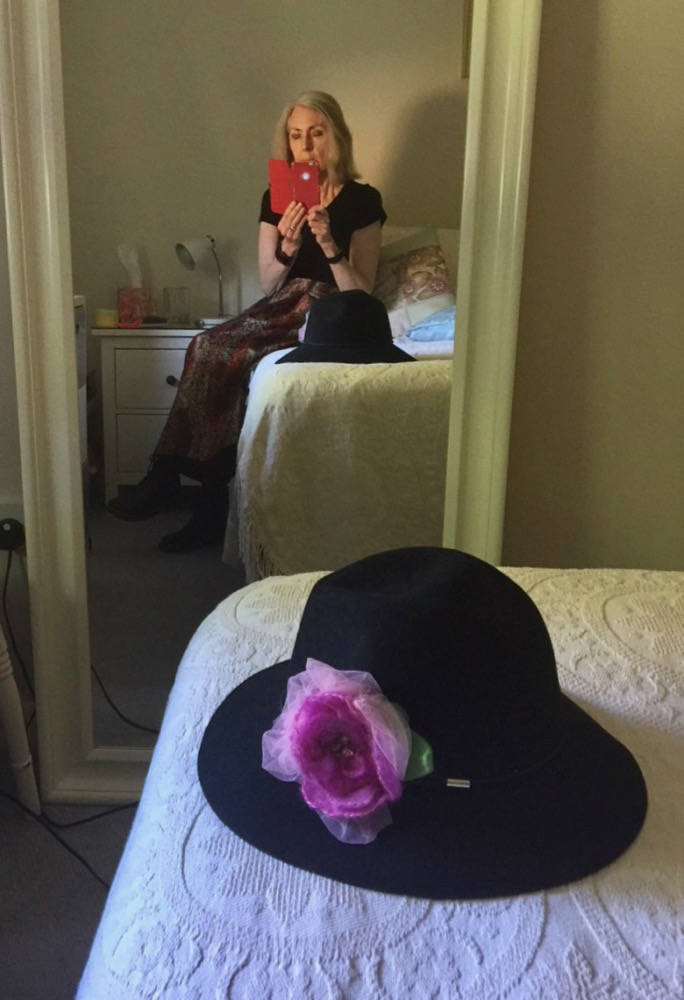 My hat was bought two years ago in Toulouse embellished here with a flower made by my friend Cathy. There’s that designer skirt again, a t-shirt from Peacocks, plus the only second-hand item that I wore that day, my biker boots. They may have looked good but they were too hot as the UK is warming up.  I should have worn my white plimsols.

Here’s the complete ensemble topped with a thin (so, not hot) black jacket from Hennes bought new for next-to-nothing, and a gaudy necklace bought from the V&A shop on an earlier visit. 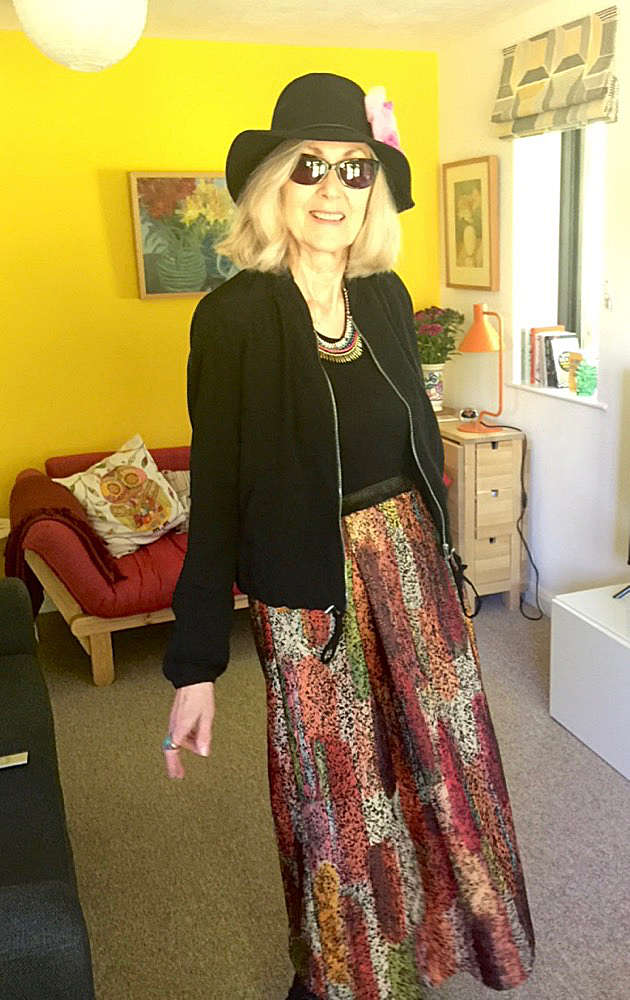 You get a glimpse of my living room with its yellow wall and a great painting I bought some time ago from Tina Balmer – have a look at her website.

Here’s a last look at Frida. 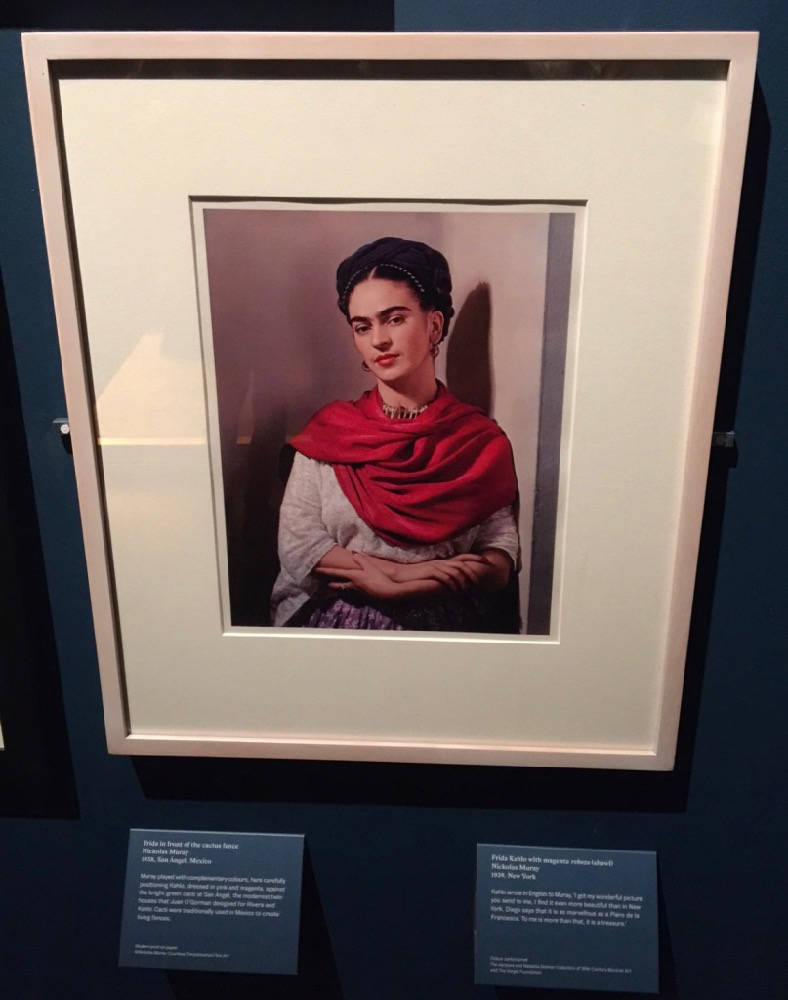 This is someone who died young. But what a life, it makes you think. Because things can change in an instant as it did for Kahlo who was going to be a doctor until that dreadful accident, which happened in her teens. Yes, just go for it, life is for living right here and now.  Stuff the trains, I’ll be going up to London again and again, doing what I love which is ‘looking’. Next trip, I think, will be to Grayson Perry’s Summer Exhibition at the RA – just watch this space!

With love Penny, the Frugalfashionshopper

P.S. I have activated, or, as they say, enabled an Askimet notice that will be displayed as you make a comment. It is important you know that while nothing is stored or seen if you look at the site, if you make a comment, the site Askimet, which deals with comments, is able to see your email address. Apologies if this is annoying but it is to make this site GDPR compliant. Do have a look at my Privacy Policy.

P.P.S And sharing with the usual lovely people 🙂

14 thoughts on “Living life to the full!”