Have you read anything by the author Barbara Ehrenreich?  I hadn’t, but apparently she’s a radical sceptic and free-thinker and she’s just about to publish a book here in the UK called Natural Causes: Life, Death and the Illusion of Control. And I’m about to do the very worst thing as I’m commenting on a book before I’ve read it (it’s on my birthday wish list).  However, I’ve just read my third review. Her argument is you can go the gym, eat well, get health checks, be as pro-ageing as you like, it doesn’t matter you’ll die anyway. And indeed, she goes on, don’t for one moment believe that your body will help you to live longer. No way can you coerce your body into longevity because what she thought were the good guys, macrophages, will turn against you and nurture the blood supply to a tumour without a thought for how well you’ve lived or how much you’ve juiced in the past.  Her credentials include a PhD in cellular immunology so, although she says she’s simplified her findings and this will consequently annoy some scientists, she backs her hypothesis up with 20 pages of notes and citations.

Hmm, well she’s right there, we all die. You can’t escape that, and tax, well you might the latter if you run a large multi-national company. But setting aside that, and noting that this review had its criticisms; because Ehrenreich is inconsistent in her attack as she still goes to the gym, I do wonder if the American way of health colours her perspective? Which I believe is that you must counter any ill-health, including chronic illness leading to end-of-life, with more and more tests and hospital treatment.  You can tell me if I’m wrong but it certainly seems that way from another book, Being Mortal, by the American surgeon Atul Gawande (which I did read) which argued that our pursuit of survival gets in the way of the reality of our mortality.  He wants us to have a good life all the way to the end and as part of that mentions hospices, but it appeared to me when I read his book that a hospice seemed a fairly radical idea to him, a surgeon, who had been taught to save life rather than help people towards their final time on earth.

But here in the UK we have a very good hospice movement and it wouldn’t seem radical or out-of-place to have a relative going to a hospice.  On the contrary you’d welcome it. And I know this because when I was a nurse I worked in a hospice. You need to allow people to die. It is not giving up on people, it is giving people wonderful care to the very end of life.

I began writing this early on Sunday morning and only a couple of hours later my friend Tricia Cusden, founder of Look Fabulous Forever posted on eating for a longer healthier life. In quite a technical piece she describes our DNA structure and its ageing and argues that although you can’t change that ageing your lifestyle choices can delay that deterioration. And one of the lifestyle choices you can make is to eat healthily.

It’s not that there’s a happy medium between those two perspectives, that would be a bit trite, but both have a point.  Yes, we’re all going to die and really, you can’t change that, but you could eat well, although how long that would prolong life is another matter.  My view is should you not live as healthily as possible, so you are comfortable as you age? We don’t want to live longer if we are unable to walk and are too frail to care for ourselves.

My position is that I know I’m not as fit as I used to be.  There are factors that have contributed to this: I stopped going to a class over a year ago, moving house and down-sizing was exceptionally stressful (it always is) and I had two viruses this winter which left me feeling physically low.  But hey, good news I have finally found the class I want and need.  And. I’ve found a Personal Trainer – yay!  I’ve searched for this person for a long time and I’m right at the beginning of getting a fitness programme tailored to my needs, and I’ll keep you posted on this.

And just to show you how we all come up short of our aims and intentions. On Sunday we went out to see the Brighton Marathon in action.  What an event, what an atmosphere, what a buzz.

This is why I moved to Brighton!  But it was much colder than it looked and we got quite chilled. 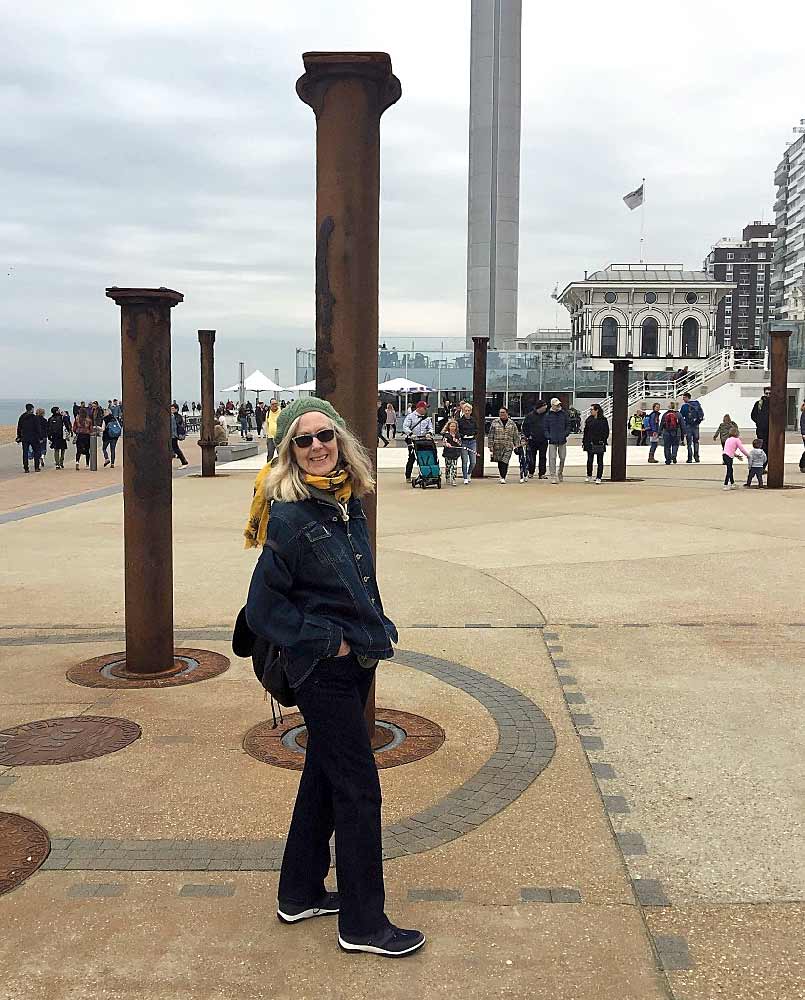 So, having had a healthy breakfast (muesli) I saw the words ‘fish and chips’ outside a café.  Reader, I went in had three cups of tea, two slices of bread and butter (look, it was brown bread) and a huge plate of fish and chips.  That warmed us up!  But we had to wait for a bus and by the time I got back home we were chilled again so we had another cup of tea and a delicious hot cross bun (with lashings of butter and jam – yum).  And then nothing much in the evening apart from crisps washed down with zero alcohol lager and a cup of decaffeinated coffee and a couple of biscuits. Consequently, I woke at 1.0am starving hungry and had to get up and eat a banana. Honestly, in comparison to Tricia, on that day, I did not come up to scratch, but I truly intend to be better!

Btw, I’ve made an appointment with my General Practitioner to check my BP and I’ve also re-started the NHS Couch to 5K running programme. This is the year I’m bringing fitness back to my body.  How do you feel about that?  And your fitness?