I do hope you’ve all had an excellent Christmas.  We did although it wasn’t quite as we expected. In fact, we had our family Christmas Day on the 22nd, which was such a delight. I cooked a steak and ale pie with mash and gravy, which was much appreciated by everyone as it wasn’t the ubiquitous turkey, which we all think we want, but is usually rather tasteless and only made palatable with all the trimmings.  On the actual Christmas Day it was just me and Mr F with a small but very delicious organic roast chicken and loads of veg. Before our meal we had wonderful walk by the sea with British winter weather at its best with a bright blue sky, blue seas and even a little warmth from our sun. Here’s some pix of the walk. 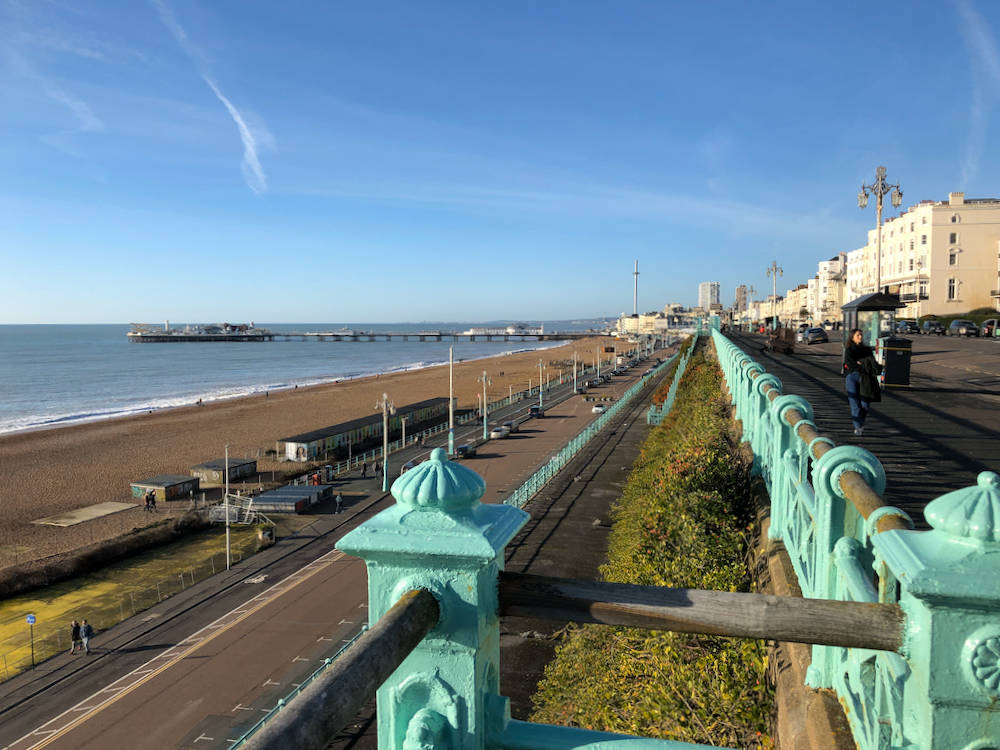 Do you notice on the left of the pic some tiny figures by the sea shore. 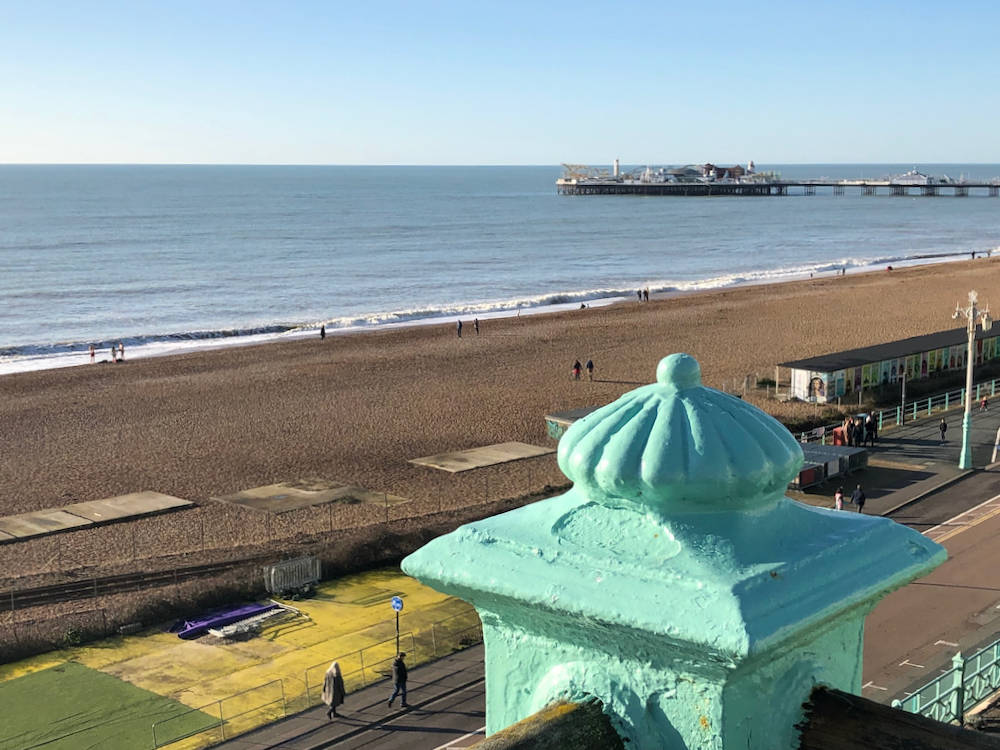 They went into the sea and swam! 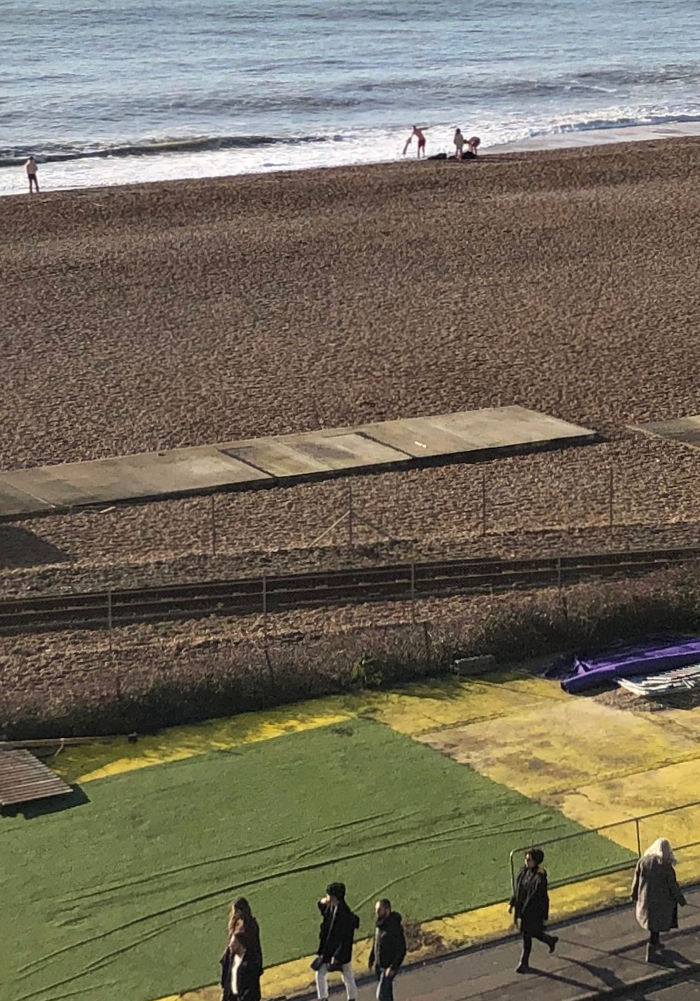 But when I say it was British weather at its best, I don’t mean it was actually warm.  Here I am wrapped up for the weather. 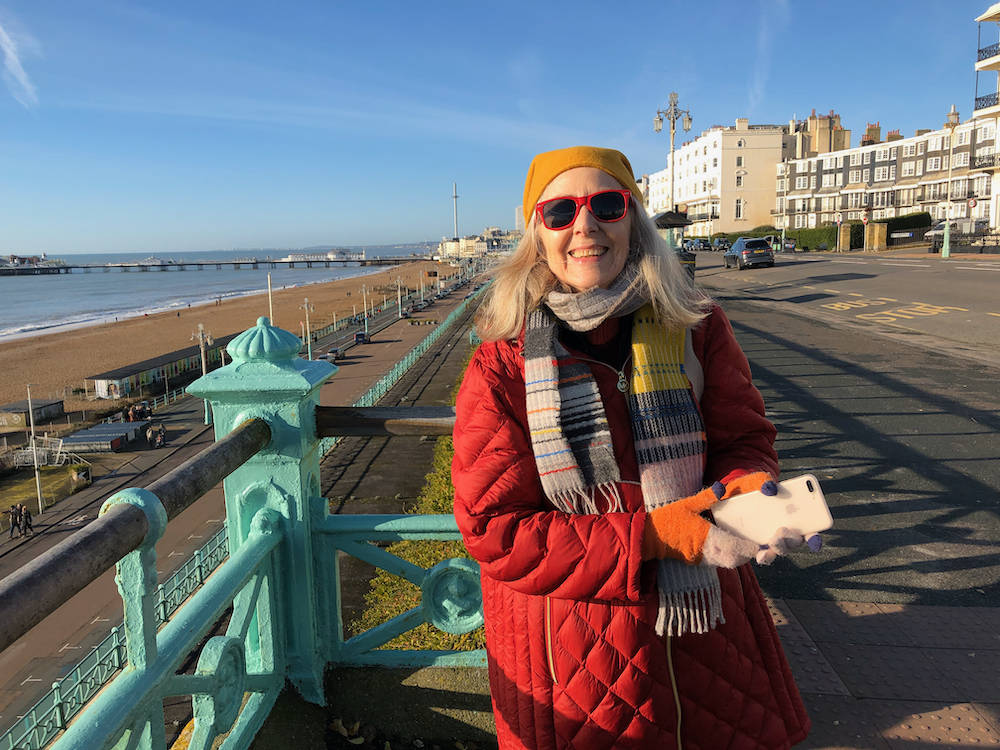 But yes, people in Brighton (and elsewhere around the UK) go in to the sea all the year round, and, apparently, as well as liking this mad activity, swear by its health-giving properties.  I’m not someone who goes around envying people but those winter sea swimmers?  I’d love to be in the sea with them, but in reality probably won’t ever do such a thing.  However, never say never!

Anyway, why wasn’t the day quite as we expected? Well, we got back from our walk and half way through cooking the Christmas chicken I started sneezing and realised I’d got the family cold, and two days later I have a full-blown streaming head cold. Then dear reader, just before I left for my walk I’d said my usual thing, which is, ‘where are my rings?’ I have a habit of taking off my wedding rings whilst cooking and there are only 3 places I put these precious rings.  Could I find them? No I could not. All day we searched in every place possible evening through the rubbish with all the vegetable peelings. End of story is that on going to bed I found the rings in the pockets of the woollie cardi I wear around my shoulders. Why they were there I have no idea, but put this down to my developing cold, which has made my head a little fuzzy.

And the third reason the day didn’t go quite as expected is that we watched a film of our choice, which turned out to be a right turkey (!) and unworthy of all the praise that has been heaped on it. We debated whether we would watch something we’d already seen and loved, Blade Runner 2049, or the newly minted and very much praised as the film to watch, The Irishman. We dithered and then chose The Irishman, and what a crock of s..t it was, that’s three and a half hours I’ll never get back. Have you ever watched something and felt that creeping, ‘why-am-I-watching, it-might/could-improve, but I’m-not-sure-about-this, yet we-need-to-know-how-it-ends’, feeling?

Look, I speak as someone who just a few months ago watched the entire series of The Sopranos, and I watch a lot of stuff, and nothing and no-one can top that. The film The Irishman isn’t setting out to be a TV series but yet it was like watching a very poor version of The Sopranos. The genius of that superlative series is that you begin to love Tony Soprano and you know you shouldn’t, but you do, you understand, you empathise, you see him, and then you think, no I really shouldn’t, he’s horrible, but then you understand, you empathise again, and you see him for what he is. Can Scorsese provide the depth and insight that The Sopranos had? No, he can not. Can De Niro reach the heights of James Gandolfi’s acting? No way, absolutely not. Do you love the main character as you do in The Sopranos? No you don’t, the main character is unloveable and actually rather wooden. And all that CGI-ing? It doesn’t work. The actors are old and you can see that. But. Ah ha, I see both Martin Scorsese and De Niro are producers of The Irishman. Well that sums it up.   The Irishman is an over-indulgent vehicle for their egos and nothing more. The film really is pants.

It’s interesting what the critics like and don’t like as opposed to what the public like. Currently, there’s a big hoo-haa about the film Cats, which surfaced in the UK last Friday with abysmal reviews. Indeed the critic Peter Bradshaw wrote his review in verse, which was a hoot to read and summed up his 1* review brilliantly. Other reviewers have given this film no stars at all – wow! Is it really that bad?  Thing is the trailer didn’t help, and anyway, here’s a truth that I hold.  I used to love theatre when I was in my late teens and twenties. I was nursing at St.Thomas’ (in the days when you did your training actually in  the hospital, and what a debate there is there as to whether nursing has improved by being a degree course – could write so much more here, but not now). Anyway, every day free theatre tickets were left for nurses, and so I went to the Old Vic (just round the corner from St. Thomas’) many times plus West End productions, and all for nothing. I saw Lawrence Olivier on stage twice and I even have a theatre programme with Helen Mirren in a Shakespeare production as a Lady-in-Waiting, not that I knew who she was, or would become, then. Anyway, having loved theatre at that age I slowly grew out of love with it as, in comparison to film, I began to see theatre as inherently artificial. Film has as much artifice as theatre, yet it seems to my eyes to be far more naturalistic and ‘right’ and therefore I hardly ever go to a theatre, and musical theatre – never. I cannot abide musicals. There, I’ve said it. Suddenly singing and dancing for no reason, I shudder, so to transpose a musical comedy from theatre to film, and have actors dressed up in fur cat costumes prancing around, and do read the lines about Idris Elba in the link above – noooo! Hilarious!

Hey, though, it’s begun to trickle out through Twitter and other media (plus a friend’s views) that people actually like Cats. Well there you are, you cannot tell whether a critic has the actual sense of what the public might like.  Remember The Greatest Showman?  It was totally panned by the critics but very successful at the box office, and much loved. Maybe Cats is going to repeat that. But I would never ever go, me, I’d rather see a John Wick film, although John Wick 3 was very disappointing. John Wick 1 had soul (yes there was a lot of violence but it was kind of unrealistic so I can watch that) 2 was OKish, and 3? Sorry, Keanu, it just wasn’t any good, please don’t do another.  Actually, the last Star Wars is out and on my must-see list and we have our seats booked for next week, when I hope my cold has gone, plus I hear very good things about Jumanji, The Next Level, which should be fun to see. Btw, I do watch serious films and in January I shall return to the film society in Hillcrest (that I used to run) and see the film Cold War, which is meant to be a very good film. Another good film, btw, neither too heavy or violent but clever as clogs, and great fun, is Knives Out. It’s brilliant!

And books. Did you get books for Christmas? I got the follow-up to Elizabeth Strout’s Olive Kitteridge, Olive Again. I love the character Olive, and was so pleased to find the mini-series (on Now-tv) based on the first book, which is excellent and not just because of the actor, Frances McDormand, who plays Olive, but because it follows the book’s storyline and is as good as the book. Don’t you hate it when they tweak the storyline. Anyone watched this year’s version of A Christmas Carol on BBC1? I decided not to watch the 3rd episode as really what were they thinking…… I’m  not shocked (very little shocks me, well apart from the stuff I write about on that other blog of mine) but so not sure about the changes and after our experience of watching The Irishman I’m not wasting my time again. Btw, those of you who live outside the UK there’s plenty of lovely happy Christmassy stuff on the TV, but we just don’t watch that kind of programme. Gavin & Stacey, for example, never watched, ever, should I?  But we do watch light entertainment and for some relief after watching a serious documentary or something like that we watch The Marvellous Mrs Maisel, which is so good. The frocks, the jokes, the script and although it does go slightly off in the 2nd series it’s recovered in the 3rd. We also love  Gogglebox, or Have I Got News For You, or something of that ilk

Back to books – just read a really great book found in a charity shop, The Muse, by Jessie Burton, the author of The Miniaturist, another very good book. But do have a look at The Muse as it’s intricately plotted with two timelines that look at love and deception and art, and, well, it’s wonderful.

At the moment and thanks to Christmas I have a pile of books on my bedside table to read including: Gail Honeyman’s Eleanor Oliphant is Completely Fine; My Brilliant Friend by Elana Ferrante (can I admit that I’m finding it hard going something about ‘the voice’ so I’m half way through and giving it a rest) and Olive of course, plus I’ve ordered Deborah Orr’s memoir, Motherwell: A Girlhood, which I’m so looking forward to reading.

So that’s it for today. I expect many of you have completely different views and tastes re: films and books, but hey let’s celebrate difference, and I’m interested – what are your favourite books and films? I need some recommendations as I’m probably staying indoors for a couple of days (croaking & spluttering ++ now) and it’s always good to write a list of possible reads and must-watch films. And it’s good to try things that are new and/or slightly out of one’s comfort zone. I’m ready and willing to look at anything you suggest 🙂

Happy New Year to you and thank you so much for reading me. I appreciate you all so much!

42 thoughts on “Let’s celebrate our different tastes and views! Films & books to enjoy or not in the New Year!”