It’s mid-March, which is about the time we get very mixed weather here in the UK. Sometimes it’s freezing and when I read of other bloggers who live in the northern hemisphere having temperatures reaching 70F (that’s 21C to us and a warm mid-Summer’s temperature) I just marvel as it’s far more likely to begin the day here at 1C(33F) and only go up to 10C (50F) plus on the coast there’s that sea breeze that cools temperatures down and, for me, makes a cozy wool hat pulled over my ears an essential part of my outdoor gear.  But Saturday brought us the best of those glorious Spring days with no cold north-easterly winds and a warming sun. I sat on a sea-front bench and just revelled in the sun on my face and the warmth.

I also noticed that many people were carrying their coats and winter-wear jackets. As I sat on the bench watching as they walked by I took off my hat, scarf and gloves and thought wow, it’s time to bring out the jackets I wear in the Spring! The title could also read ‘shopping my closet’ as nearly everything I’m wearing is old and mostly bought from charity shops.

I’ve been wearing this yellow jacket a lot lately. It’s very much a transition jacket as it’s long and warm enough to wear during these early Spring days when the sky looks lovely with the sun peeping through the clouds but it’s still a bit cool. Do you see I’ve matched the hat and the gloves? I’ve just finished knitting a scarf the same shade of orange that will go well with the beret, but it’s very long so it’ll be great to wear in the depths of the winter wrapped several times around my neck. 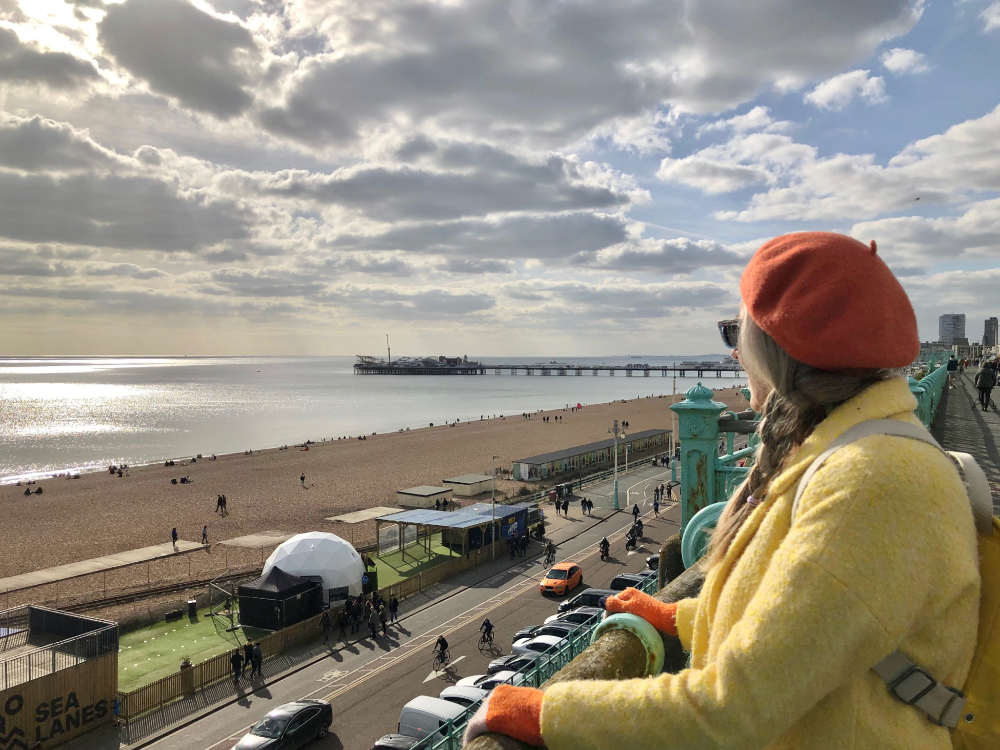 But very soon I shall be wearing shorter jackets like this one. 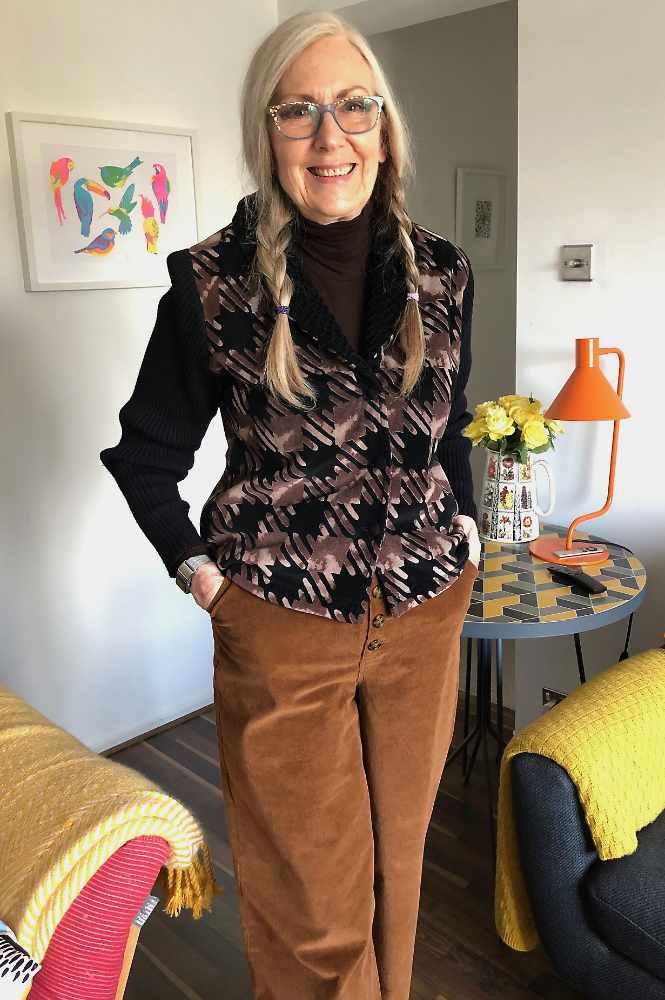 I bought this in a brocante shop in France in 2017 for not very much. I do love it, but it’s not been worn all that much lately, time to wear it again, I think.

Here’s another brown jacket that needs to come out of the wardrobe and be seen a bit more. 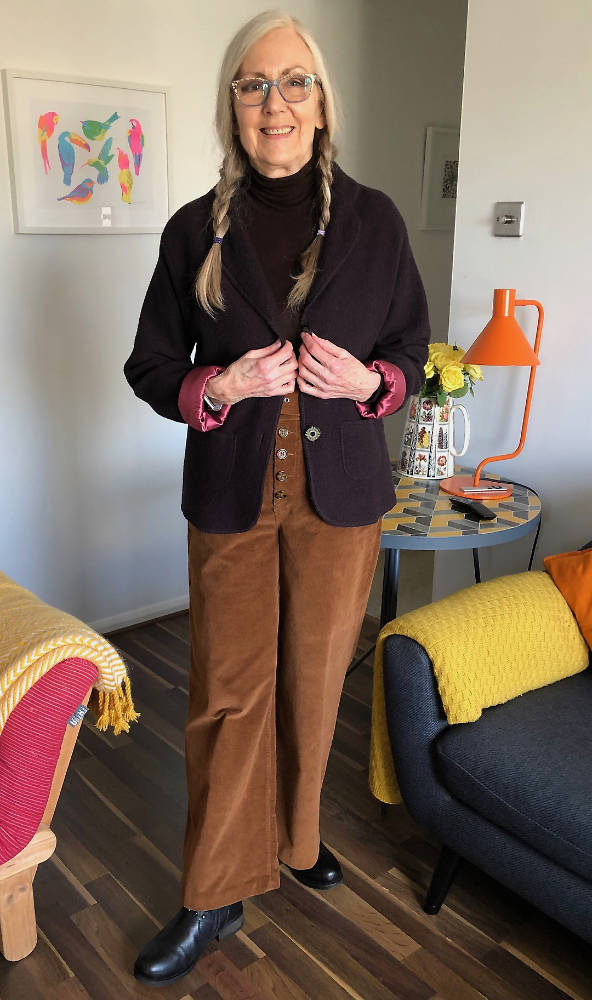 This M&S jacket is made from boiled wool and has a lovely silky pink lining, and was also bought in a charity shop. As was this favourite of mine you can see below, which I also found at the back of my wardrobe and not worn for ages. 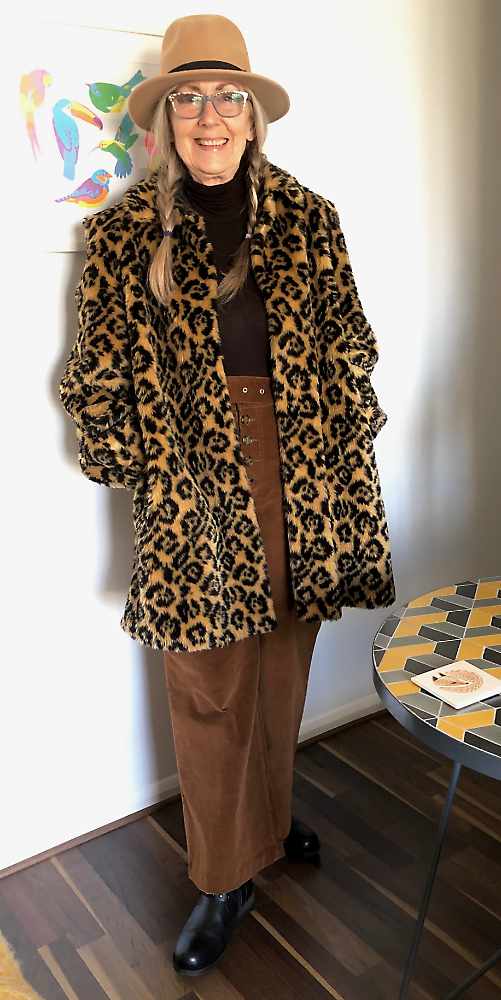 And finally here’s that Jaeger jacket that I found in my local charity shop last year. 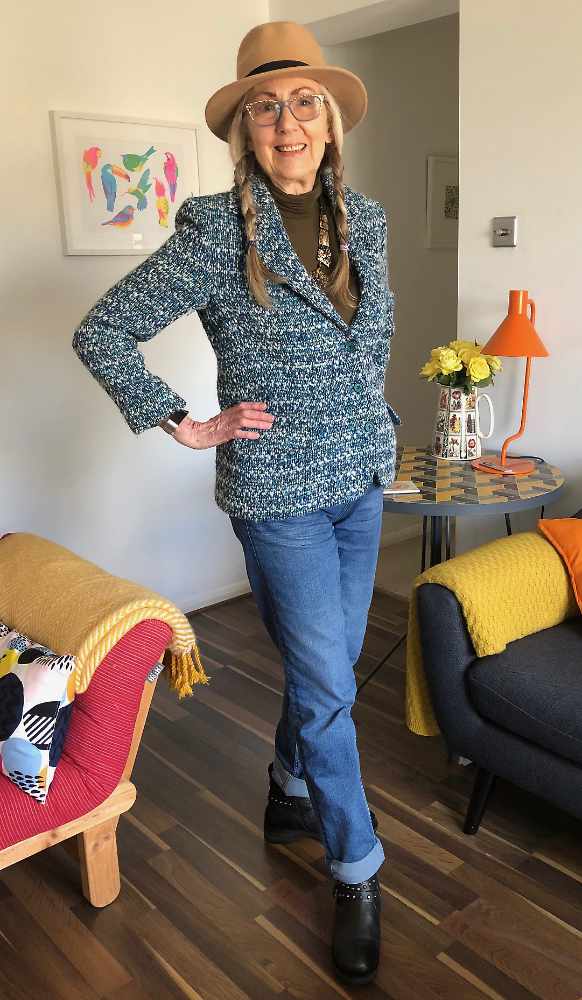 I always think there’s quite a short window for wearing jackets. At the moment it’s just a tad too cool although I think I could have worn the Jaeger jacket on Saturday when it felt so warm as it’s quite heavy and made entirely of wool. And then all of sudden the weather improves and it’s too darn hot to wear them! But I do love a jacket and I am always on the look-out for them in charity shops, and double yay, as charity shops will open with all other non-essential retail in mid-April. Can’t wait for that!

By the way, I continue to make a once-weekly foray out into the wider world, heavily masked, of course. It was the dentist two weeks ago. Teeth are good but veneers are a must and the question is can I afford 4, probably not, so it will be 2 to be done over the next few weeks. Then it was the opticians last week, and I am getting bright flamingo pink varifocal glasses – they are very wow and in your face! If I’m going to wear glasses they might as well be the best and the brightest (!) until, that is, I can get my cataracts removed, and, of course, the positive to cataract removal will been no more glasses, but that won’t be for another couple of years.

And at the end of this week it’s the chiropodist. Three cheers as my feet do need some attention. The hairdressers will have to wait until they open again (mid April) but rest assured I am not going to get my hair cut short again – ever.  But I have been recommended a hairdresser who specialises in putting hair up and that’s the one I shall go to. Speaking of hairdressers, last week I cut Mr F’s hair and made a very good job of it!

And finally, they are not open yet but a visit to the beauticians is more than just a treat, some things are actual necessities like electrolysis, I’m getting really furry around the chin and upper lip, I’m not exaggerating, it’s a year since I last had a treatment! But I’m very sad to say that the beauticians I’ve been going to for years seems to have closed down, so the hunt is on for an experienced electrolysis practitioner. You might say, why not pluck?  Well I did when I was young, and it made the hair 100% stronger and darker, so nope, that’s not for me. Or laser removal?  Unfortunately, that doesn’t work on fair hair, it’s electrolysis that I need, but, people, it seems that this is not taught any longer on beauticians’ courses or so I was told.  So off I go on the hunt for someone who can do electrolysis.

Anyway, overall, I get the feeling that here in the UK we’re on the path towards a slightly more normal life, although I would agree with the view that masks and social distancing will be with us for several years. I mean look at the positive side to this, as a result of wearing masks flu and colds were almost non-existent this winter, well that’s a huge bonus – onwards and upwards, I’d say.

That’s all for now 🙂

37 thoughts on “It’s time to get out those Spring jackets!”