We’ve been having unseasonably hot weather in the UK over the last couple of weeks and it’s been just too darn hot. Temperatures have reached just under 30C (86F) and that’s way too high for a Celt like me. However, friends who usually love the heat have said that it’s been too hot for them as well. It’s the humidity that comes with it that makes it so unpleasant and I’m longing for a break from this everlasting sun. (As I edit this post there was a thunderstorm yesterday and today it’s cloudy and cooler so, thankfully, there is a break in the weather.) But yes, I’m never happier when there’s a cool breeze blowing against my face. On t’other hand, do feel free to remind me that I complained about feeling the heat when it’s freezing cold in a few month’s time!

In fact, it’s been so warm I’ve been wearing the kind of clothes I usually wear on holiday in Spain or France. And I even got out a dress worn in the Caribbean some years ago.

Of course, dresses are featuring in the fashion media a lot now, but I don’t usually wear dresses during the day, being a skirts and tops type of person. But this will tell you how hot it is, I’m no longer worrying about exposing my pale purply legs to the world. Because, on the two occasions when I wore leggings, I couldn’t get them off quicker if I tried. Indeed, when I got home after wearing leggings at my choir session I rushed to the fridge and opened the door à la Claire Underwood (House of Cards) – anything to get cool. 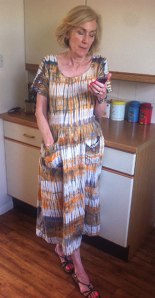 However, the weather has given me an excuse to trawl the charity shops for more dresses. Here’s one bought for £2.98 that I pounced on as it reminded me of the kind of frocks I wore in the 70s. Its quite vintage, in fact, and its lovely tie-dye material goes with the colour of my summer, which is not really purple, but variations on yellow.

Another dress found last week and unworn (still with its Next label) I kind of regret I bought. Why? Because it’s really expensive at £15. I think charity shops in the UK are getting near to the limit with their high prices these days so I won’t be going back to that one. Never mind, I found a lovely old-fashioned charity shop down a back street and into a courtyard – you wouldn’t know it was there if you weren’t looking (a friend had given me directions). What a treasure trove it was with pots and pans, and linen, hats, crockery, clothes, shoes and everything at £1 or £2. I had a long chat with the charity shop assistant, who told me that no-one in that charity is paid, an unusual situation these days, so they can keep their prices low. I found a dress at just £2 – that’s much better!

P.S. And here’s a link to some waterproofs for the showers we’re getting in the next few days.