Many apologies but life, the universe and grandchildren got in the way!  But here I am with another post.  And with no new charity shop finds, because I have decided to buy nothing this month, I shall shop my closet as they say.

Here’s an example, it’s a top which I bought in 2018 in a brocante (bric-a-brac) shop in a tiny village in France. I rather like the sentiment of the wording and is one I hold dear in these rather challenging times! 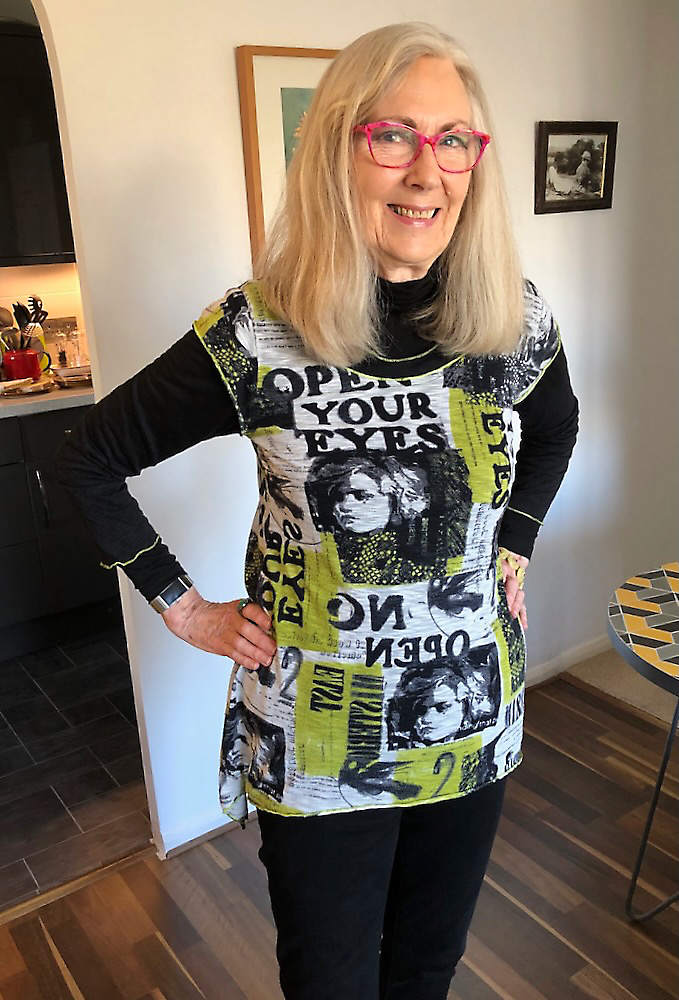 Yes, in fact I am going through my wardrobe and de-cluttering quite a bit. It’s partly the month of February and the feeling that Spring is just around the corner – don’t you just love the daffodils that are coming up. 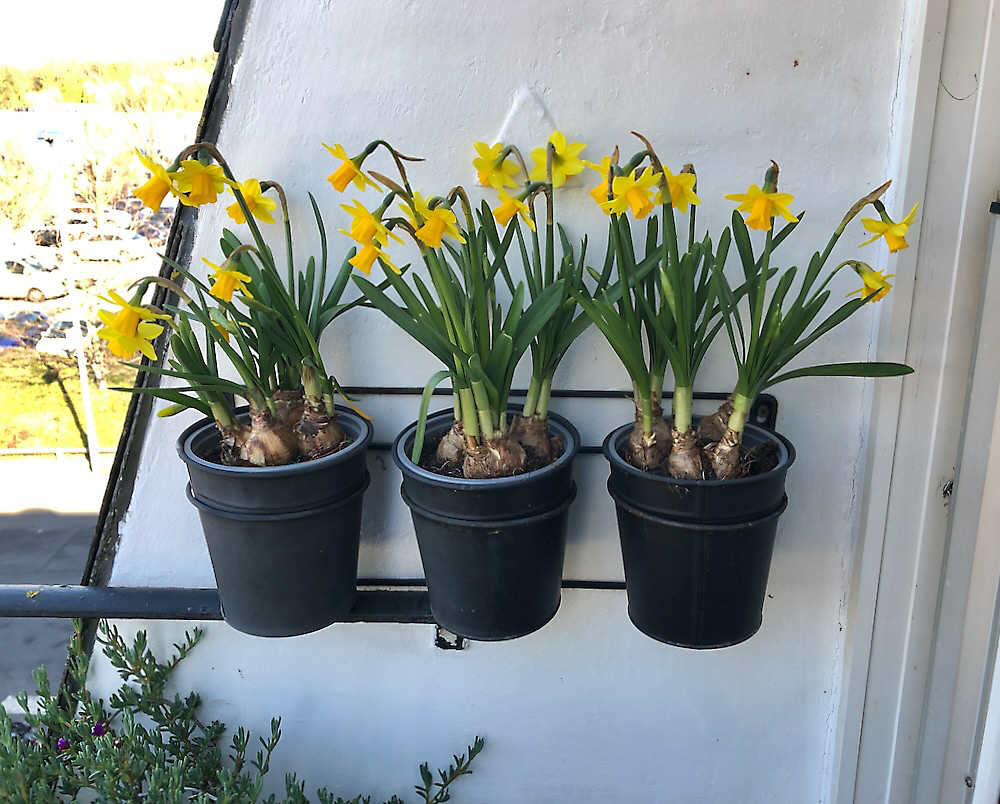 And the decluttering is also because I really need to have fewer clothes in my cupboard. I still look in charity shops though, but I am restraining myself. Furthermore, I am being quite successful in selling through one of those dress agency places, so I am picking my way through my coats and winter gear and saying, do I really love this item and is it a keeper or is it one I can sell or donate?  I am really good at this and then, of course, you know what happens! A year later, I say to myself, now where is that….., uh oh, I only went and got rid of it!

Hey, is anyone in the UK watching This Is Going to Hurt starring Ben Wishaw as Adam Kay a young registrar on an Obstetrics ward?  All the episodes are on BBC iPlayer. I’ve just watched the first episode and Ben Wishaw, who is usually quite winsome, is playing Kay as quite hard-bitten and sarcy and cynical. I’ve read Kay’s book, which I highly recommend, and I don’t remember him portraying himself as being quite so cynical.  Oh, but the picture of the NHS does make you wince and all of this before the underfunding of the austerity years and then Covid. Quite frightening really to think of the poor old NHS and its decline, so below I’m going to say something about, in my day…….!

Because I did find the whole episode rather gripping (Mr F, btw, thought it rather grim and is hoping that it improves) especially the scenes in the operating theatre, where when I was a nurse I became Chief Dirty Nurse which, if I remember correctly, meant laying out the bloody swabs on the floor and counting them. Because of course, dear reader, the swabs have to be counted in and counted out, and heaven help you, and more to the point, the patient, if you don’t count them correctly!

Gosh, the tales I could tell  about my time as a nurse and I am not saying that things were better, just that they were very different.  Comparing a nurse now with a nurse in the 1960s, which is when I nursed, is not like comparing apples with pears, instead nursing now is so different it’s like comparing an alien species with an apple. We were just different. For a start we wore a beautiful mid-length thick cotton dress with a starched apron (a new one every day) black stockings, yes stockings (!) different belts to denote the years of our training, starched collars with collar studs and, I kid you not, a frilly lace cap. And what was the very first thing we were taught? How to sew the said cap, which had a pork pie thicker outer edge that you drew up with thread to form the base of the cap and then on the internal side you drew up a butterfly and this lacy contraption perched on top of your head from day one of your nursing career.

I guess we were more like apprentices than the students that nurses are now, who have a 3-year degree to go through, and follow practices that are evidence-based. In contrast we had a little book and on the ward you were shown how to do things and procedures were signed off. We did have a 3-month initiation/training course off the wards and then that was it, you were not a student you were part of the nursing team, a junior one yes, but you were there playing an important albeit sometimes menial role from day one. However, every year you did have off-ward sessions of up to 3-weeks learning more about anatomy and physiology and new procedures.

I’ll tell you about one menial chore we 1st-years had to do every day in the afternoon. We had to take a small trolley and with a bowl of soapy water and cloth plus a large jug of drinking water, we had to go up one side of the open 30-bedded ward and then down the other, replenishing their water jugs and wiping their over-the-bed tables with the same water and cloth (don’t think that happens now!) You were meant to chat to patients and get to know them and it did teach you to talk to anyone and everyone. But heaven help you if you dawdled over one or two patients, it all had to be done in a certain time frame. If you were even five minutes over that time,Sister would, and did, shout at you to hurry up, nurse, you’ve got other things to do. Sister was God, you know, and you obeyed, or else!

Btw, all nurses were expected to care for all 30 patients, you might be allotted tasks for certain patients and if you were senior you might get the ones that needed the more difficult procedures but nevertheless all the nurses were expected to know the details of every single one of those 30 patients, especially so as you became more senior and were left in charge at night.

And the wards had copious numbers of staff, there was never, ever, any thought that nurses were in short supply. Each year had four intakes of 50 students, and in my hospital the training was for 4 years, the extra year being to get that Nightingale badge. But there were always large numbers of nursing staff on every shift. And all of us, even the most senior nurses, did everything for the patient including bed bathing and bedpans. Tell me if I’m wrong but I don’t think nurses do that nowadays. Well, if there’s one thing I can do it is a bed bath and I’ll tell you a funny story about how we were taught to do these bed baths.

This was during our 3-month pre-ward initiation. After the demonstration from the Sister-Tutor on a dummy, we were divided up into pairs, and we had to bed-bath each other. Ok we had a mock-up ward with a curtained-off bed. I started washing my partner, and was doing very well I thought, but behind the curtains we kind of looked at each other and said, this bit’s done, yes? The bit being our lady parts. But oh no, the Sister-Tutor announced in a very loud voice that everyone was to wash our partner everywhere, ‘and I mean everywhere, and I shall come and watch’! Well, the Sister-Tutor threw back the curtains and hovered over us while I washed my partner all over, including.… And then it was my turn to be washed… And you went around for the rest of the day feeling incredibly clean! But I never forgot how it felt to be washed like that and how the water cools down and, you know, the feeling of slight humiliation – a lesson well learnt.  But I told that story fairly recently to a much younger GP friend and she was horrified and said, that would be considered assault and you would never be asked to do that today – oh well, there you are, things change.

And back to the operating table and my stint as Chief Dirty Nurse in the main theatre of my hospital.  Interesting that it’s called a theatre but some of them do have tiers of seats in a mezzanine floor arrangement above the operating table and I did sit and watch countless operations. And you think that surgeons know what they’re doing? Not all the time they don’t.  I shall just stick to a couple of stories (although I do have many more).

When I first started my 3-month stint in this department, I was told about a particular surgeon who was notorious for losing his temper and throwing things, including scalpels and other dangerous implements, at the nurses. You mustn’t worry if he does this, said the Sister, it’s not personal, he can’t help it, he gets so frustrated, he’s going blind you know. Oh, Ok, I said, and thought nothing of it, as we just accepted that Sister was God and the doctors were above God, they were Supreme Beings. It was only years later, I thought, wow, why was he still working as a surgeon!

Sometimes I discuss a film I’ve watched with a friend and they say, oh, no I could never watch it, it’s far too violent, or no, I couldn’t watch it’s too gory. And I think, really? I don’t get it. But I guess I’m desensitised. I mean, that first episode of This Is Going To Hurt with the floor slippery with blood? Yup been there, done that. I’ve even, towards the end of my 3-month stint, held a retractor and helped pull an incision apart. It’s hard work!

I did my stint in the operating theatre quite early on in my 4-year training and if you’re only just 19 and on your first day you’re handed an entire leg… ‘ Here you are, nurse’, said the surgeon. ‘Oh, thank you,’ I replied. And took it and laid it out where it as expected to be. Then I was taught to count the bloody swabs. Yes, to some extent I must be desensitised.

However, can I say that the atmosphere in that operating theatre wasn’t grim as it appeared to be in that first episode, there was a lot of joking about and horse play, and a lot of funny backchat. You had to joke and play around, to stay sane, I guess. And what I mostly remember is that the whole experience of being a theatre nurse was fun!

I do hope I haven’t bored you with this.  Anyway, that’s all for now.  Hope you’re all keeping warm and well.

With love, Penny, the Frugalfashionshopper.

45 thoughts on “It’s a buy-nothing month, plus a few memories of my nursing life!”