I continue to declutter and that includes pieces of furniture as well as clothes, and I will be packing my suitcase for the cruise this week. Other odds and ends will be discarded as well. I do love the challenge of a good clearout!

I’m finding that as I age I’m becoming more and more minimalist. I do not hoard things. Instead I love sifting and sorting. Anything to do with family history including photographs and ancient family ephemera is sacrosanct. And there are a few family treasures including the ubiquitous pieces of silver that need to be handed down, but they are truly few and far between. Anything like vases, curios and trinkets? Everything, and I do mean everything, comes under very hard scrutiny.

But all of the above doesn’t stop me from collecting anew. Currently, I’m rather taken with a mid-century to late 20th century look, and having done the flat I’m in now (until 16 August) in a clean modern, white look with corresponding crockery, I might just go mid-century and start collecting Denbyware crockery. Especially, 1970s Denbyware crockery – see here – which I had on my wedding present list and was what I collected then. Twenty years later you couldn’t give this crockery away, but now it’s to be found in trendy vintage shops at £10 per plate. Now if I’d squirrelled it away up in our loft…… The trouble is I’ve had too many lofts! However, as ever, I am going to have the greatest fun searching for bargains!

Thank you so much for all the comments on last week’s post. Just as we are all so different as we age, in the same way we adapt to our last stage of ageing in different ways. It’s clear that because of my past experiences with older relatives I like to have a plan. But of course, you don’t have to move to be ready for that frail stage, it is just, I think, worth looking at, and being, in your own way, prepared. I might write about this again.

In the meantime I’m going to live in the now and have as much fun as possible. And having ended the week feeling pretty grim because I was stressed with the negotiations with part of the ‘chain’ and consequently not sleeping well, (although I don’t sleep well in the hot weather anyway) we went to a flat warming/Pride party at the block of flats we’re going to in 11 days time – and we had such a great time.

This is what I wore to the party.

Yes, that’s my khaki coloured tutu, which I haven’t worn for well over a year, actually more, not since I stopped running the film society. I remember it cost all of £3 in a charity shop in my then home, Newhaven.

The top, which cost £5, I’d found two days before in a charity shop near where I will be living.  It’s a very good area for charity shops!  The sequins were in honour of Pride, which was on over the weekend.  Btw, I had wondered if I would be over-dressed what with the tulle and the sequins, but on arriving I found everyone was super smart and looked great – phew. And anyway, it’s Pride, so I wore the sparkles as a tribute to the event.

And see the thumbnail at the top of the post.  Yes, back we went via the bus.  To think we could have walked down a flight of stairs to the party!  But hey, that’ll happen soon!

Do you have a Pride near you?  To cut a long story short after walking around for hours and waiting for a non-existent bus, we shared a taxi back to the Park & Ride near us with a couple from Pagham, which for a Brit is a bit of a distance away (over an hour by car) and they said they came just for the sheer colour and fun of it all. 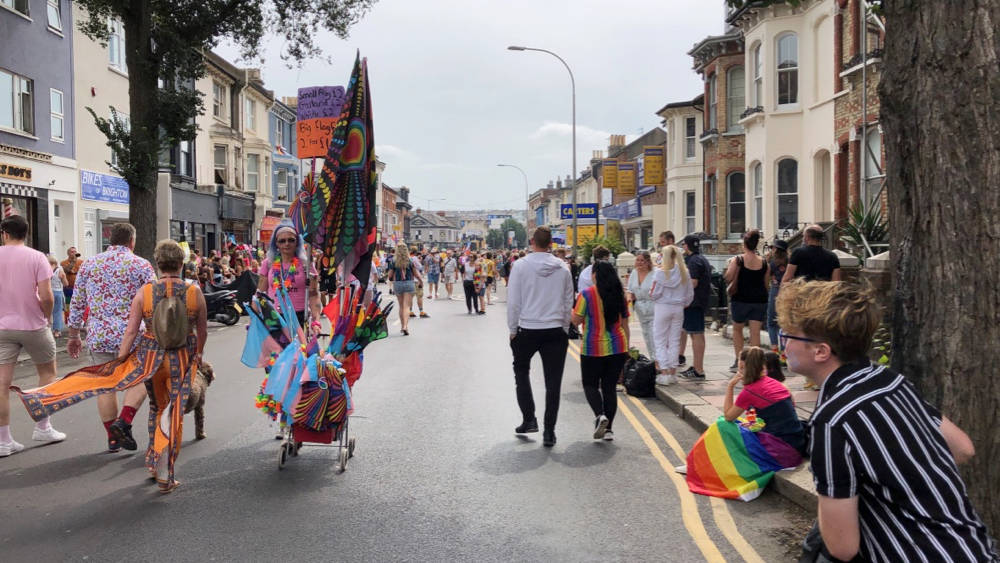 This is not the Parade but an action shot that shows you Brighton out and about enjoying themselves. Thanks to Mr F for this pic.

It was strange weather on Saturday. The rain kept off but it was humidly hot and grey and breezy. 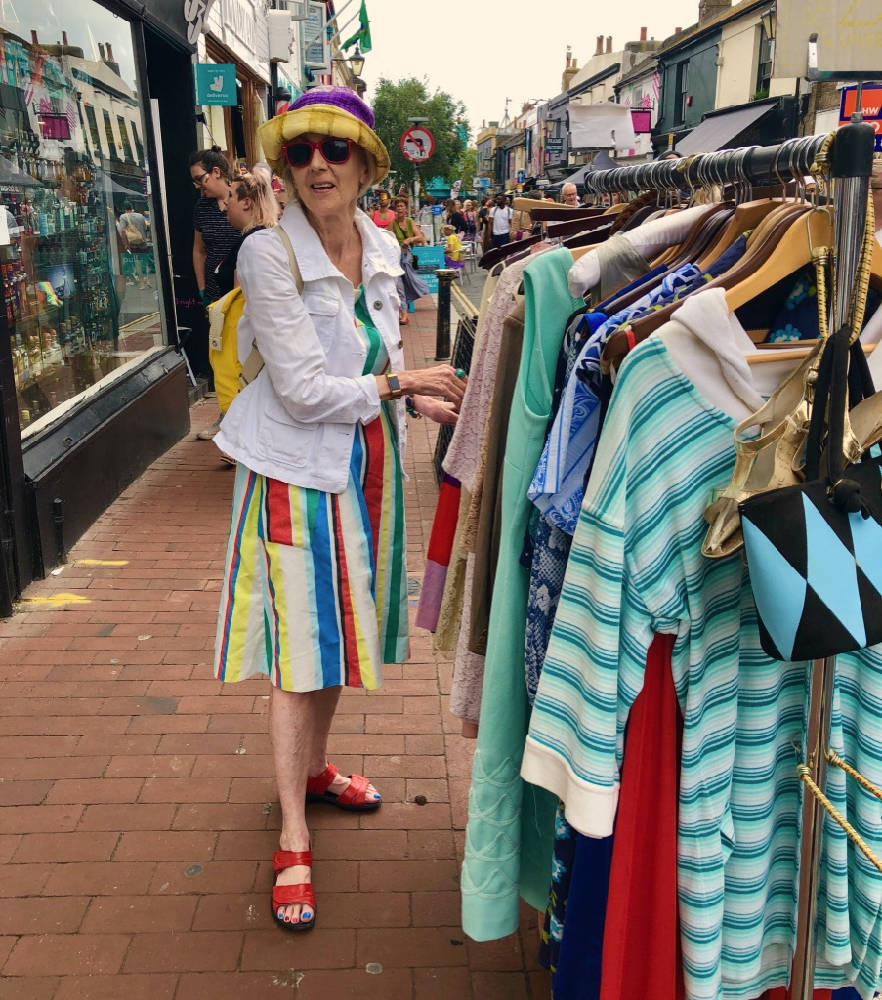 Can you see my toes? I have three colours on my toes, again, in honour of Pride 🙂