Did I mention that I was going on a cruise?   Like last year (and even though I’m going away for 14 days) I’m taking a capsule wardrobe for daywear, sticking predominantly to blue jeans and black skinnies with a mix of black and blue tops.  Here’s an old pic of me in my very old cruise (charity shop) blouse and Gap jeans (£4).  Here’s hoping we get the weather to wear this blouse, as don’t forget at the top of Norway it could be ultra cool.  Packing a thick woolly cardi, for that part of the cruise. 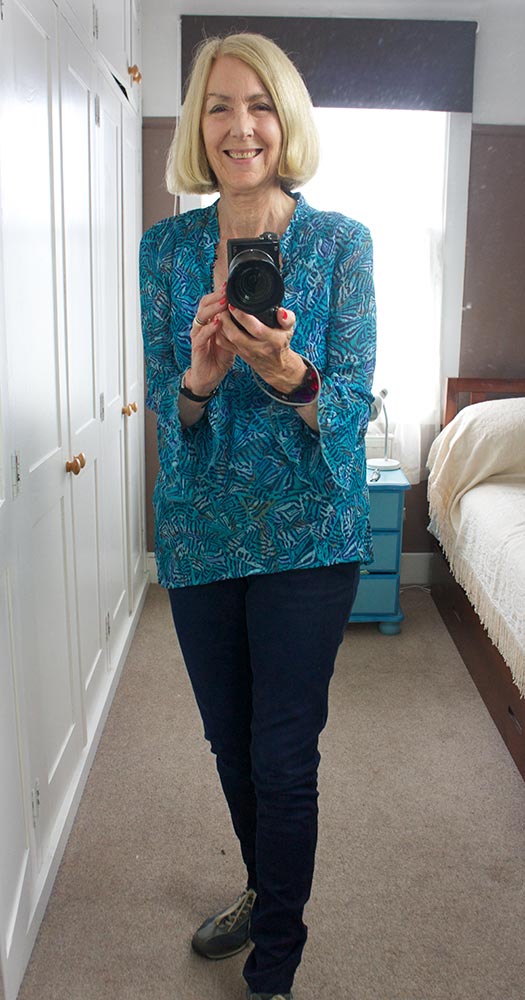 In the evening there are 3 Gala nights, for which I have 3 long frocks.  Here’s one (bought for £15) that I’ve worn on every cruise.

Long frocks were the norm in the previous 3 cruises but reading some reviews of this liner, people are apparently wearing anything on those nights. But I shall wear the long frocks come what may, including this. 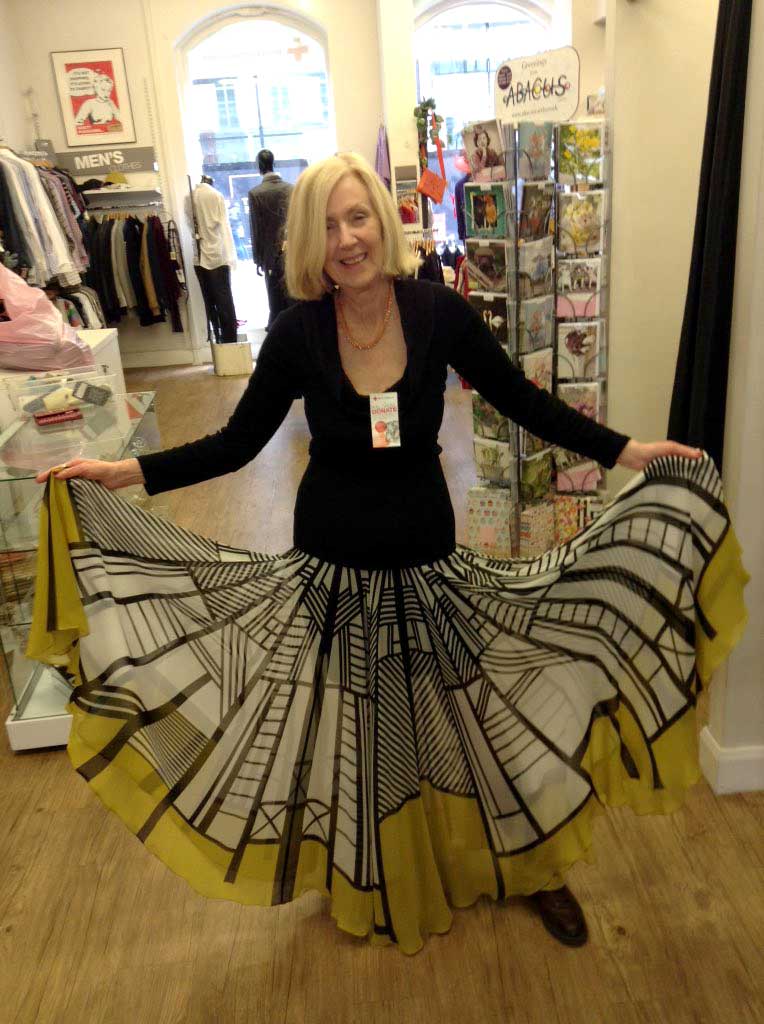 What do you think, people?  It’s a skirt plus a Joseph top, and I’m being a bit of a numpty here, as I’ve put the top on back to front (doh) and only realised it afterwards!  It’s in cashmere with a silk roll-top neck and was reduced to £10.  The skirt is rather fine don’t you think?  Actually it might just be a dress with a large black band that goes over the bust (but not mine!).  Ok, it cost £45, but it’s a Jonathan Saunders skirt/dress and his clothes retail at very, very fancy prices.

For those of you who live outside the UK and/or don’t know much about our charity shops this pic (taken by @FriendsofRCBPR, thank you!) shows you exactly what our boutique-like charity shops are like.  But this is rather a special charity shop as it’s the Red Cross shop near Victoria Station in London.  I visit it every six months or so, and after stifling a scream at the prices (because these are London prices, folks) I love to take a look as it’s full of designer clothes at very reasonable prices (for a designer piece, that is).

Really I can’t not dress up, so for the 11 other so-called Smart Casual evenings I shall be taking 3 cocktail dresses, plus a couple of sparkly tops to go with the ubiquitous black evening trousers and, maybe, one skirt. And whatever other people are wearing I shall be strutting my stuff.

Btw, all the costings I put into these blog posts is to say – you can do it, you can dress up yet spend next-to-nothing, you really can!

Actually feeling slightly nervous as it’s an American cruise line (no names) and it already feels a bit different from the past three cruises on British ships.  What I’m used to is paying up front, and then nothing much else once on board (apart from drinks) including, I might say, the tips for the stewards and everyone else, which are all included in the overall price.  There seems quite an emphasis on getting you to pay for loads of extra stuff. Enough of that (what a first world problem) but here’s the (critical) thing will I be able to get a decent cup of tea on board this mega liner?

I’m sure you’re aware that a cup of tea is an absolute essential for a lot of Brits.  I mean, coffee has become a go-to drink for us and, boy, is that a change in our British habits, as when I was a child in our house we had nothing but instant Nescafé, which bore no resemblance whatsoever to the ground coffee of today.  And I’m old enough to remember my grandmother drinking that Camp coffee, which was made of chicory and tasted beyond bitter.  Now, though, we’re as civilised as you are, and me, I like nothing better than an Americano from Café whatever.  But I still have to have a cup of tea every now and then, as in, two large cups first thing in the morning and then in the afternoon, then again in the evening, you get the drift.  And on one cruise line I’ve been on, there’s not only free tea available on tap 24/7, you get a tray of tea in the morning delivered to your bed-side, also absolutely free of charge.

So what sort of cuppa will I get on this liner?  Will it be that dreaded tea that seems so weak to our palates, and tastes like coloured water?  The tea I like has to be strong and brewed a while, and the colour of a dark ginger nut (that’s an English cookie).   And another thing, it has to be boiling hot – I have had a luke-warm wet thing served to me a couple of times!  OK, I’m prepared for all eventualities, I’m taking some tea bags with me!

That’s all for now, but leaving you with a pic of tea taken in a lovely garden near where I live – did I say afternoon tea had to include cake! 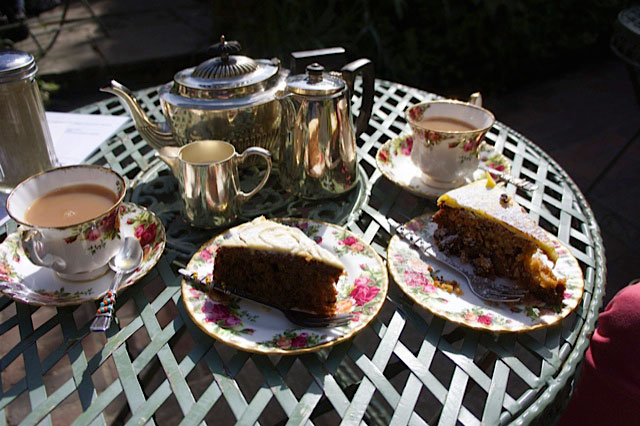 P.S. Sharing with Catherine Summers and her #iwillwearwhatilike session In a homage to Prince this week’s theme is purple – I think my cruise frock qualifies!

20 thoughts on “I’m taking a capsule wardrobe, I promise!”