I’ve just written a guest blog for Maddy at Home (being published late Thursday) where I say that most of the time I ignore my age. But let’s look at this in more depth.

For instance, I see Helen Mirren has been interviewed in Saturday’s Guardian Weekend about life, the universe and being 70. My word, she looks good but, apparently, she hates the word beautiful being applied to her, and what’s more, she thinks that she doesn’t look better than when she was younger. Instead, the whole point of being older, she believes, is she doesn’t really give a flying f… what people think!

Oh yes, that’s the attitude to take, although I’d argue that she’s a stunningly attractive woman and a role model for us all.

But setting that aside, (the fearless flying attitude) she also says that it’s a pleasure to be 70. Hmm, will I be as positive as Helen Mirren and say the same thing when I reach that age next year? I probably will. But, but, I think it’s quite hard work moving into your 70s.

Who was it who said ageing is not for softies? Katherine Hepburn, I think. Yes, for me, it’s about putting in quite a bit of effort into ageing well.

In one respect, of course, I’m lucky in that nothing major has occurred, but even so I take quite a vigilant watchful approach to several areas of my life – because, I have to.

For instance, in the morning, I’m quite stiff and bent with a distinct tilt to the right! My weekly yoga class is a must for me as it stretches and straightens me out. I also do yoga approx. twice a week in the morning on a mat in my bedroom. I can’t function and walk properly without it.

I also go to a weekly senior’s gym class and there’s a bunch of people there who are much older and fitter than me. I asked one of them how long had she been coming the class – ‘oh, about 22 years’ was her reply. (As you can’t start the class until you’re 55 she must be at least 77.) And why do you come, I asked, ‘because so many of my friends can’t walk now’ was her answer. Gosh, a good reason to i) start a gym class and ii) continue it!

And in the gym I do a lot of weight-bearing exercises because of my bones, which are a bit thin. (I also walk as much as possible) Yes, I have very mild osteoporosis in my right hip, which I know about because I get a Dexa Scan every three to four years. Here in the UK this is free via our wonderful NHS so I hope all you UK readers approaching 70 know what your bone density is. If not, go get a scan, please, as there are no symptoms for this, and you won’t know until you break something.

And then there’s my skin, and it’s not just about keeping away from the sun because of my tendency to get minor skin cancers, it’s also that it’s quite thin, especially on my bony shins. Having been a nurse, I know that old age might bring on leg ulcers. So I asked my general practitioner what I ought to do and she replied put on 4 stone (56lbs) in weight! She laughed and then said, ‘no, don’t, please don’t. But that, apart from moisturising your skin a lot, is what would prevent my skin breaking down. But I had a few years yet, she thought.

It bugs me a bit that when you ask how to prevent something like the leg ulcers of old age, there is appears to be little you can do apart from ‘a moisturiser’. Well, which one? To cut a long story short (I bought a few duff products) I highly recommend the purity of organic coconut oil, which I get from the online organic provider of oils NHR.

Getting back to the question is age a number that you can ignore – the answer is that you can’t ignore the ageing process.

So, I don’t ignore my own ageing. But, here’s the thing, is being an older person about physical ageing, which you cannot escape from, or is it about a mind-set, and an attitude? When I look at my physical body, and the work it takes to keep it going I accept what I am and then say to myself, get over it.

Because this decade of retirement has been the time of my life as I’ve published a book, become involved in a film society, and write the blog.  I’m even thinking of setting up another blog (in a totally different field/subject.) How about that then? So, my take on ageing is to be up for anything, and never, saying never.

Consequently, I don’t think I’ll say hitting 70 is exactly a pleasure; it’s more about living the life and looking for the next challenge. 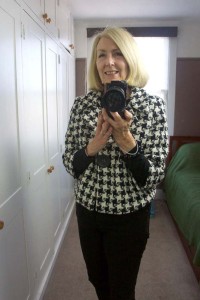 For example, now I’ve done the new-look blog my next challenge is Instagram (although I won’t be photographing my food, which I believe is what a lot of people do).

Anyway, here’s a jacket I bought recently, which will be great for these cooler Autumn days. Bought, btw, for all of £7.50, which us slightly more expensive than my usual bargain buys, but it is new and still with its M&S label. And the point of putting up this photo is that the pic should go into an Instagram account. Not too sure what it is to be honest, but hey, I’ll learn!

That’s all for now, but do tell me what you think about this ageing business!