I’ve been away!  And I also had a bit of a break from the blog – apologies!  But it was so good to return to an old but favourite haunt – Suffolk!

For those of you living outside the UK, Suffolk is part of the rounded bit on the east of England. I just love it. We’ve worked out that we’ve been going to this area for 45 years! This is because my parents moved to Suffolk (to the port of Felixstowe) shortly before we got married so yes, I have an anniversary coming up soon.  My parents died over 20 years ago but we return to Suffolk again and again. The attraction for us is the feeling of returning to familiar and much loved places and towns.

We always stay on the  coast, which always has a cool breeze. How I love cold air up my nostrils! Seriously, I do! It must be my Scottish ancestry but I cannot abide hot weather. And to walk in the sunshine with a cool to cold wind on my face is my idea of bliss! Also I admit I don’t really like the countryside. It’s nice, but it doesn’t do it for me. We’re all different but how I love the sea and watery vistas.  Like this. 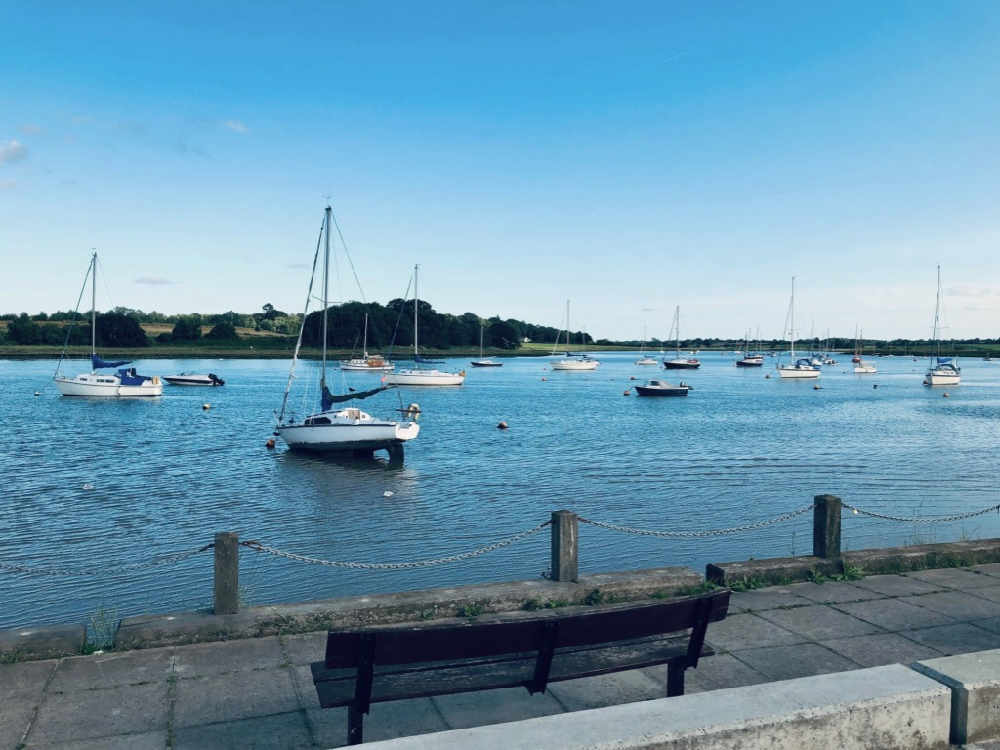 Perhaps this love of the sea comes from being born in India and then, at the age of 13 months, travelling on a large ship to England, through the Suez Canal and on to Liverpool. I still have my immigration papers! According to my father if I’d had my way I would have been overboard several times as I was always leaning over or crawling toward the rails!

We stayed in Woodbridge, which is a small town on the Deben estuary. This is the walk we did nearly every day. 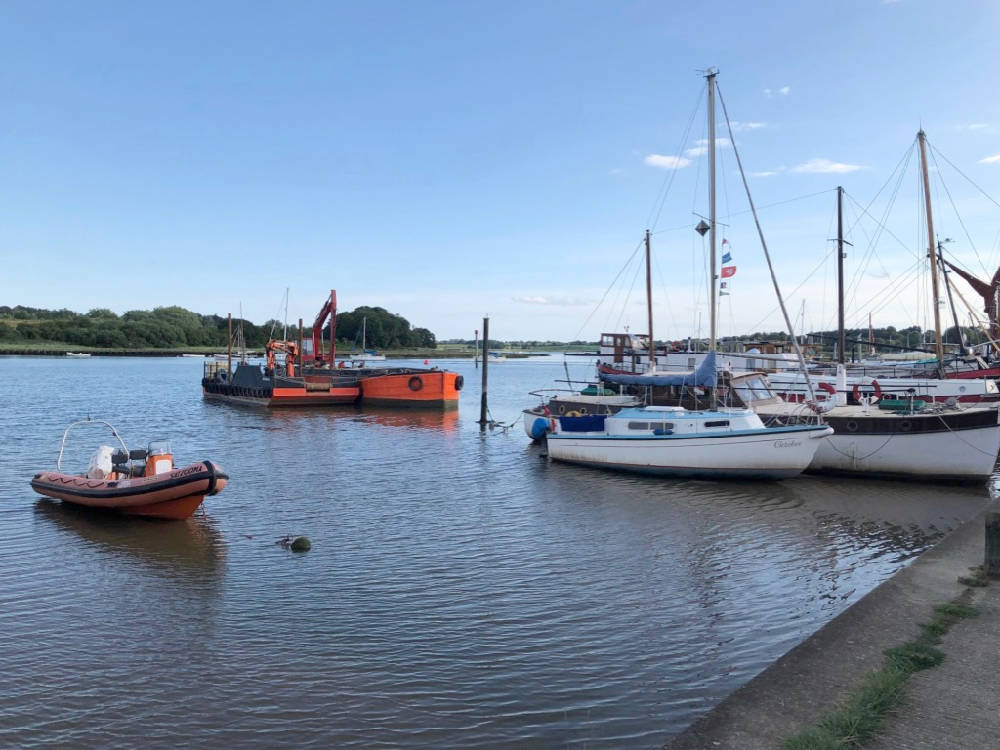 I cannot have enough of these quayside walks. 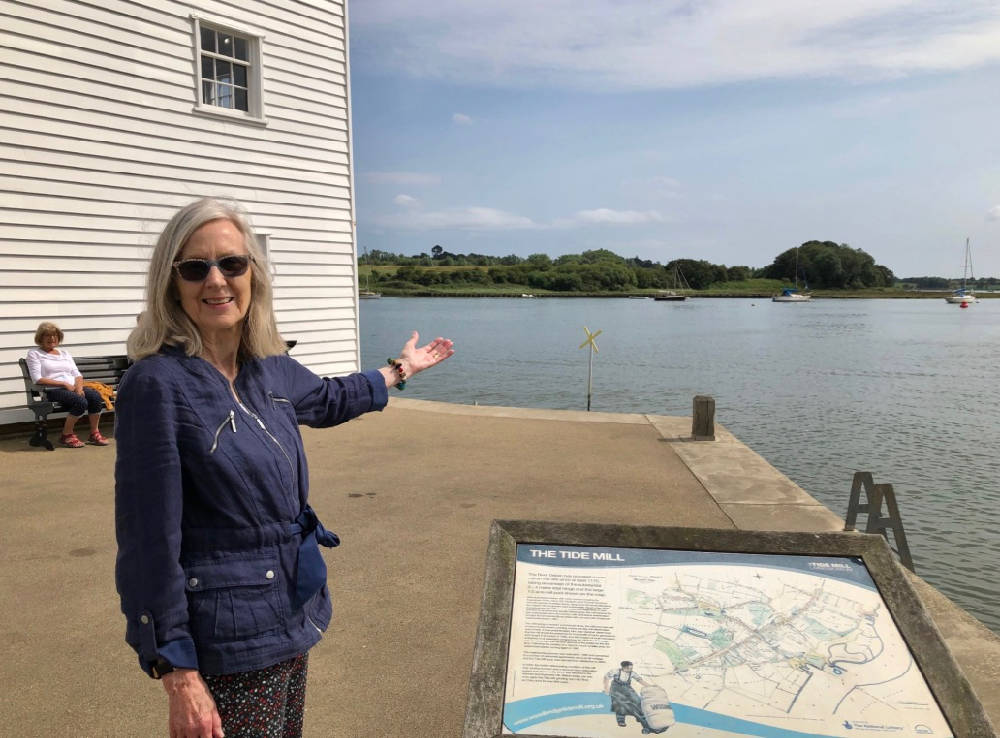 And a closeup of the ancient Tide Mill. 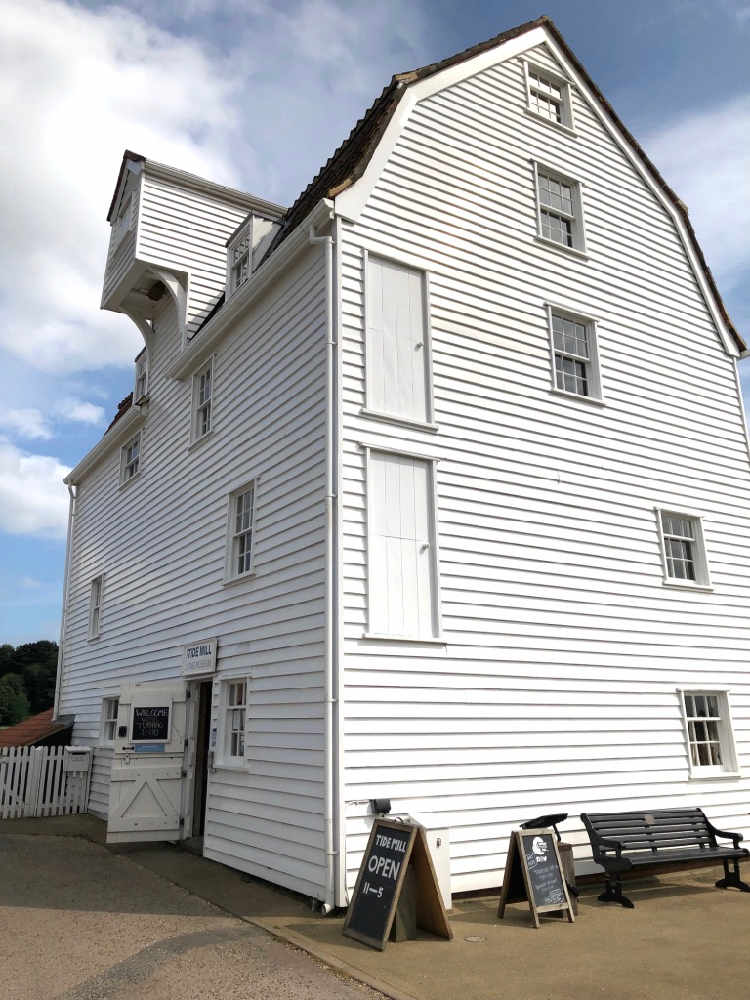 The weather was cooler than the previous week when I wore that gorgeous striped dress. There were a couple of quite warm days but when we went to Aldeburgh (pronounced Allbrah!) it was definitely jeans weather with a really cold off-shore wind – brilliant! 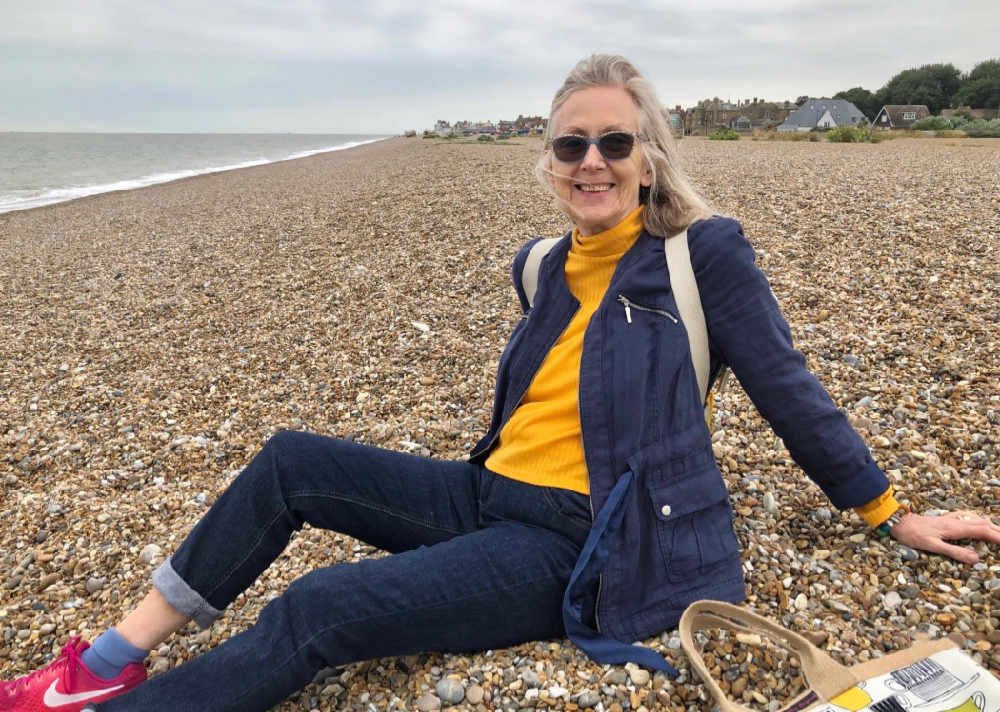 Those jeans are the ones I bought in Toulouse in March of this year. They’re finally in the wash, but they’ll only have a gentle hand wash as I want to preserve that just-bought feel to them. 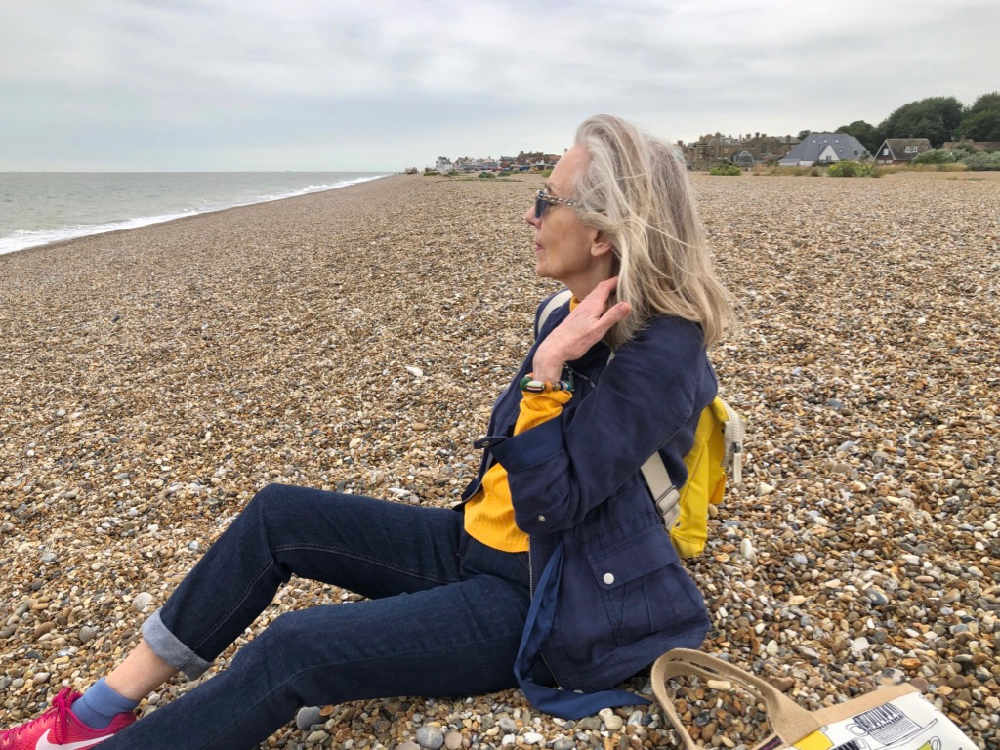 Yes, that’s the beach and just like Brighton it’s all pebbles! But it does host some pebble loving plants. 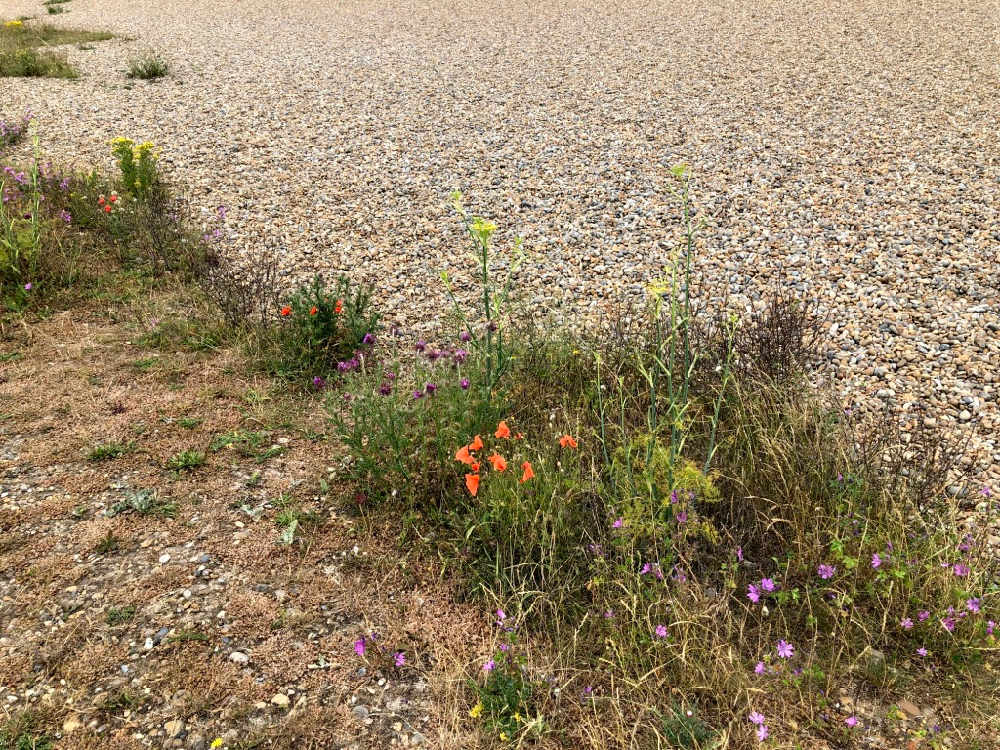 I love the feel of this quiet unspoilt beach. Although, apparently, those who live all-year-round in Aldeburgh hate this structure (sculpted by Maggie Hambling) seeing it as damaging the natural habitat and look of their beach. 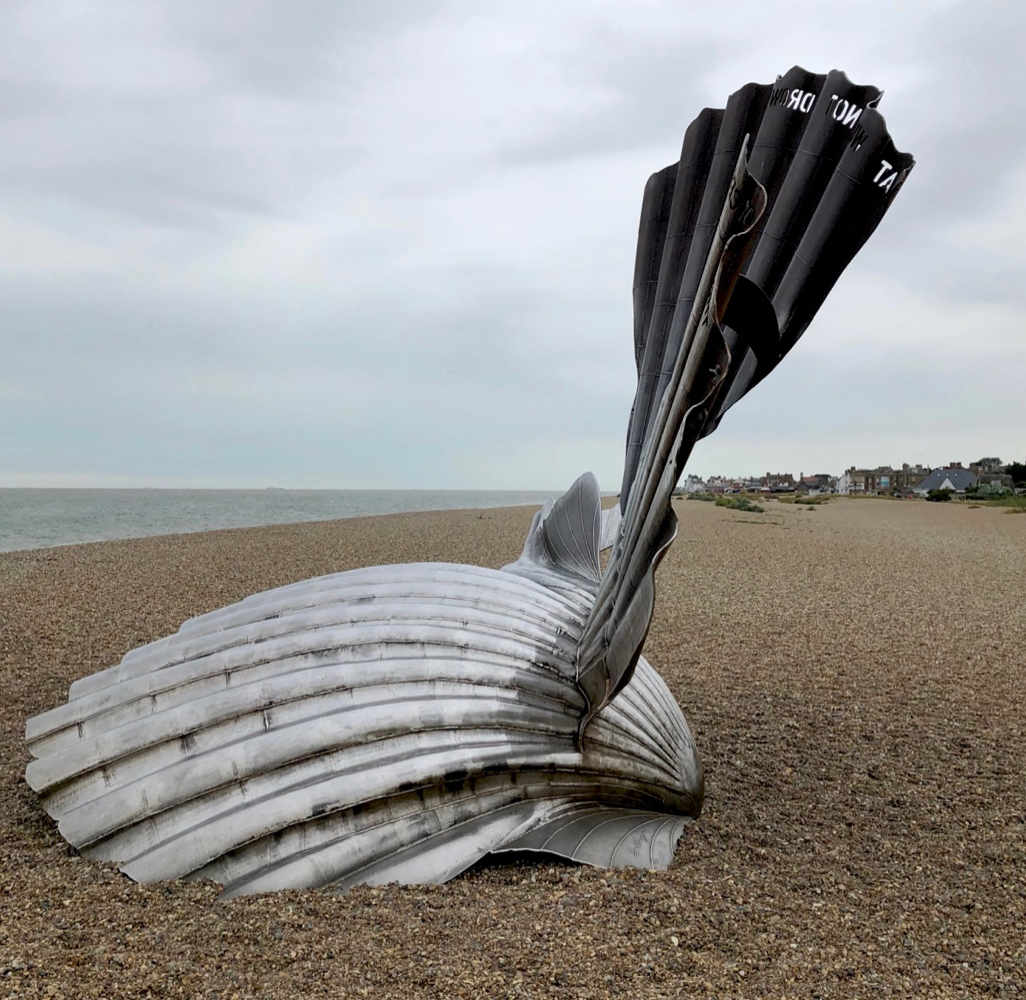 I say all-year-round as so many of the lovely cottages in Aldeburgh are holiday cottages.  The residents have tolerated this but I wonder for how long. There are places around the coast where people have begun to resist this trend.

My view is that both Aldeburgh, and further up the coast, the town of Southwold, have been ruined by tourism and 2nd-home owners. Remember I’ve been going to this area for decades and I can remember when both towns were quite scruffy. There were many junk shops where you could find all sorts of treasures, not any more, and far fewer holiday cottages. It’s all too tidy and posh now with trendy shops selling expensive clothes and antiques. I know everything  changes but…  Everywhere there were, of course, the ubiquitous charity shops. I looked but bought precisely one cotton top (not shown in this blog) and was very frugal on this holiday (top cost £1.99) unlike last year when it was so hot I bought three new and quite expensive cotton dresses because I hadn’t packed hot weather gear! This year I brought clothes for both hot and cooler weather and wore both kinds but could have taken half of what I packed!  I never get it quite right!

Someone kindly took a pic of us and I think it’s a stunning sculpture. 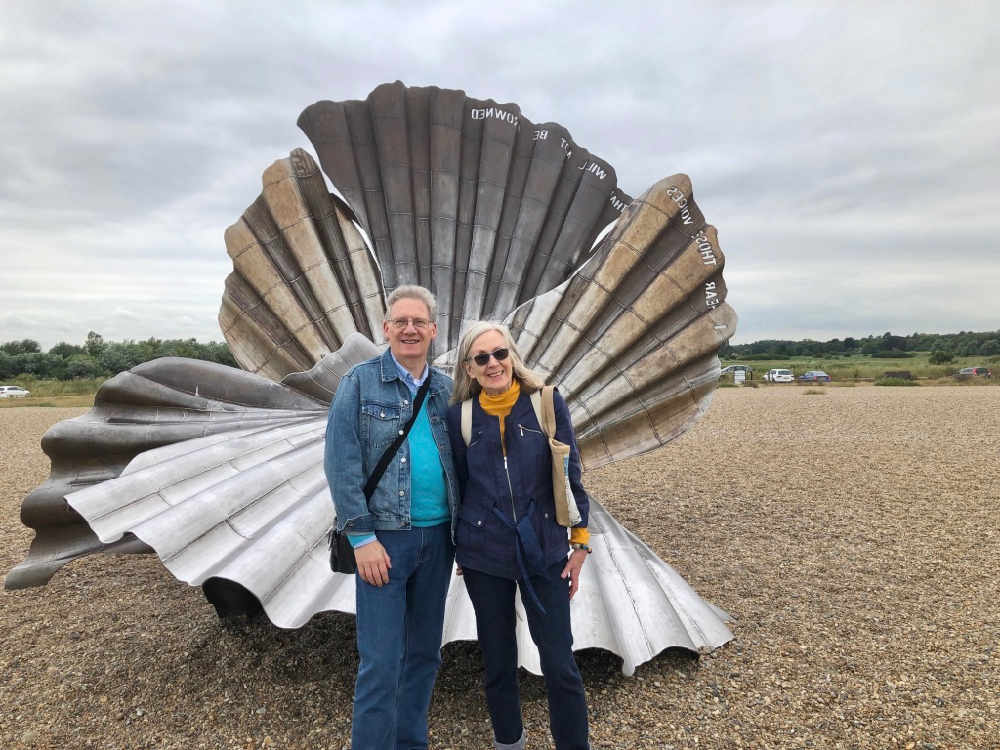 We had a cup of tea in this. 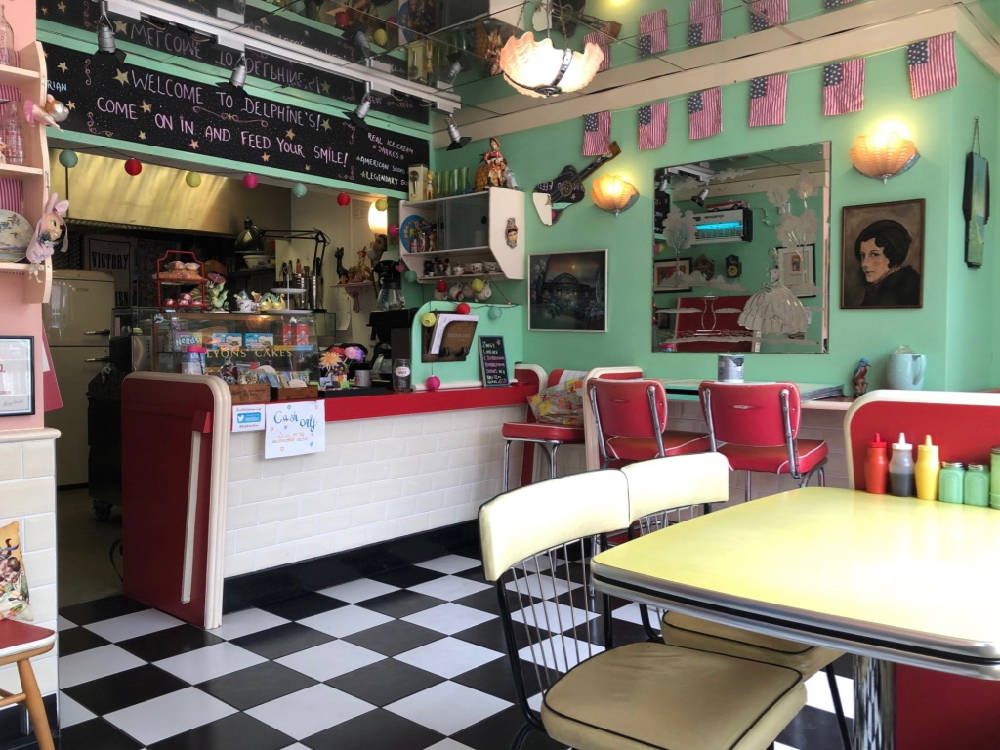 I didn’t take all that many photos of Felixstowe, but here I am near a namesake beach hut. 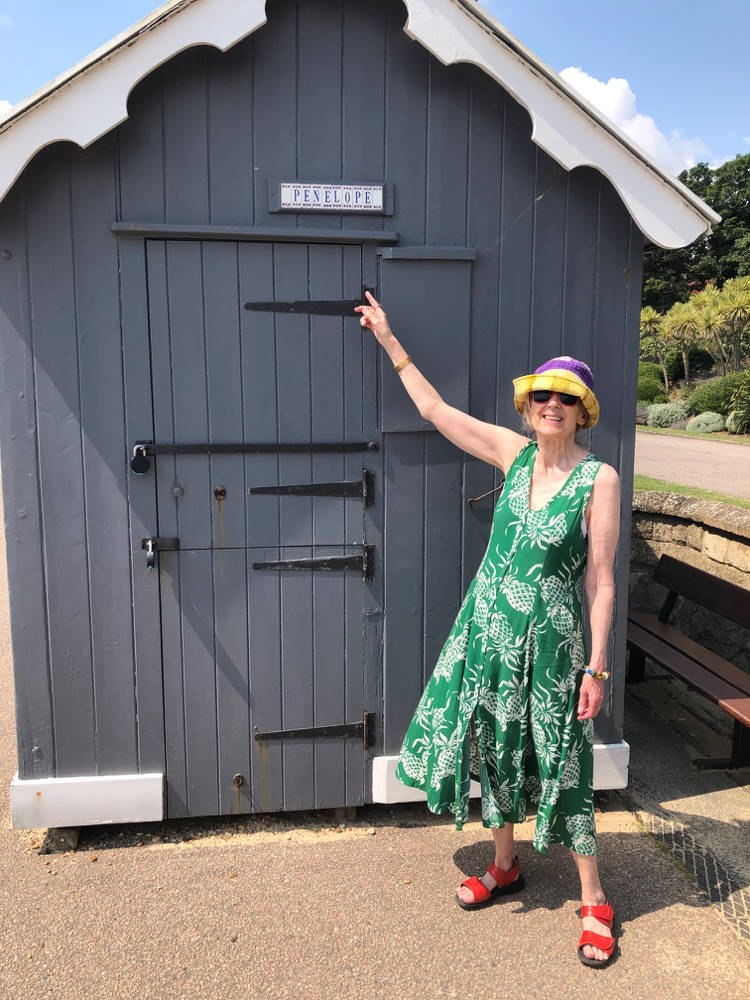 It was a warm day!  And what’s more I took off my shoes and paddled and the sea was warm.  I was so annoyed as I’d taken my swimming costume to Aldeburgh where it was freezing, so I didn’t swim, but didn’t take my cozzie to Felixstowe, and I definitely think a swim would have been possible. Never mind – there will be other opportunities!

This below is a view taken from the little village of Bawdsey (population 276 in 2011) looking towards Felixstowe. Bawdsey Manor (now a private school) is where some of the earliest research for radar took place. We did visit the radar hut though, which was recently renovated by local enthusiasts. 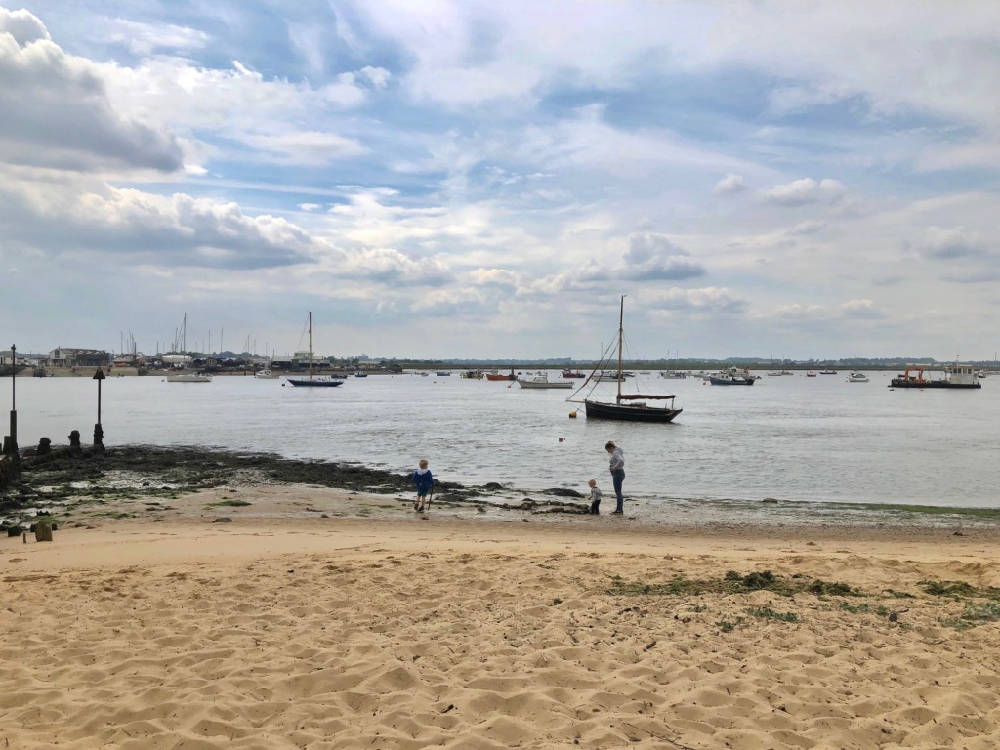 At last some sand!

On Saturday we had a final long, long walk along the estuary. There’s the Tide Mill in the distance. 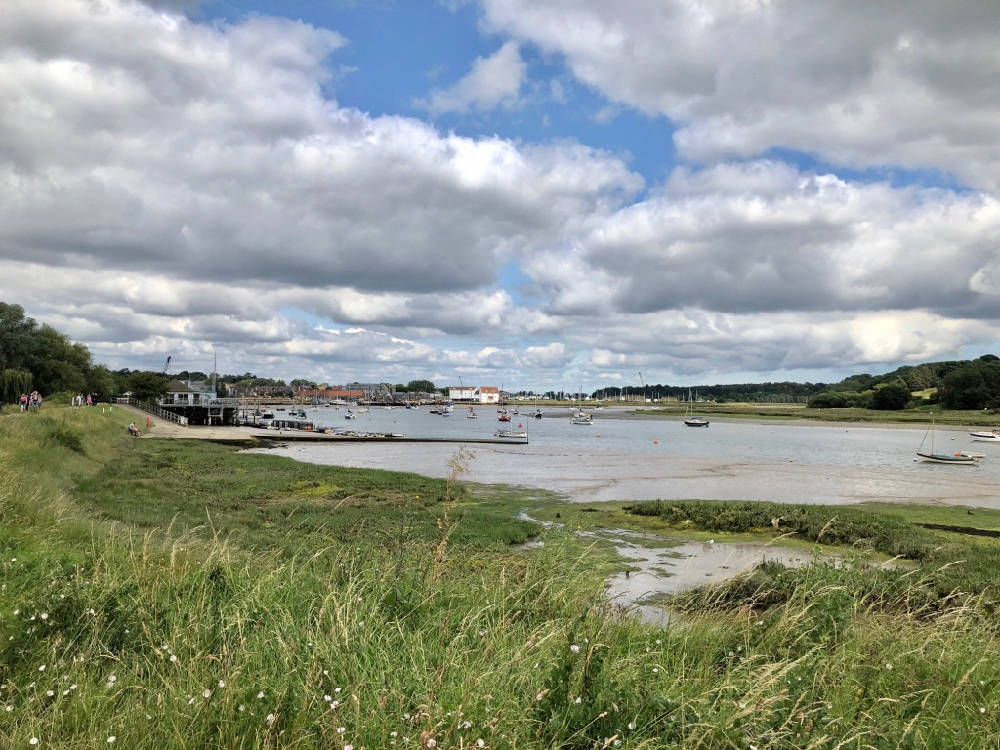 And here’s a view the other way. 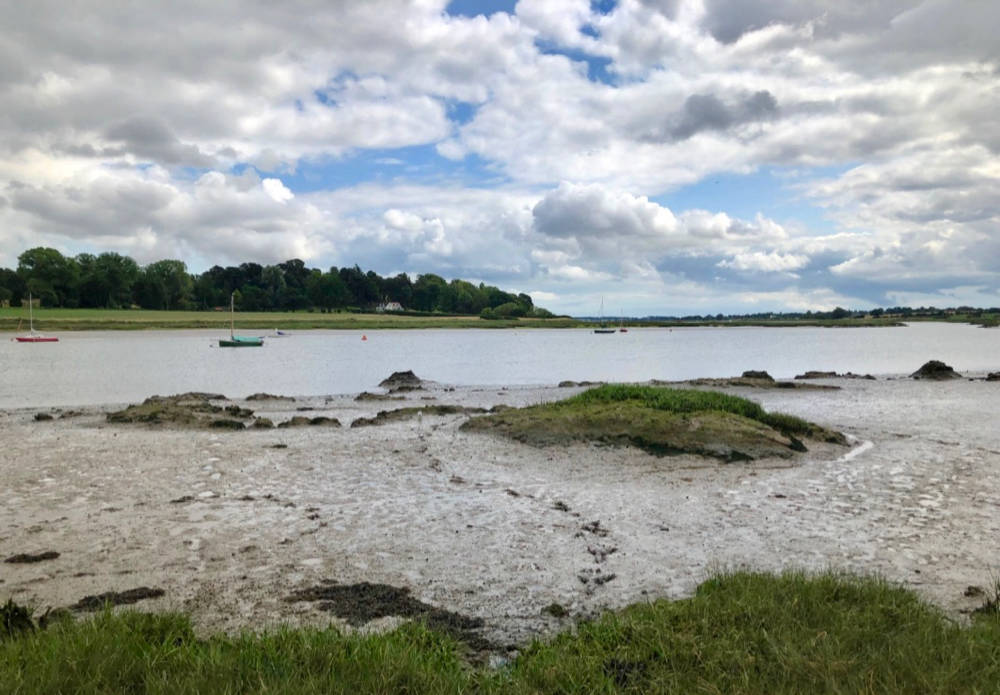 It’s such a haven for wildlife. I wish I could give you a soundbite of the sounds of the birds and the crickets. Yes, we did see lots of insects during this walk. And throughout our holiday, interestingly, I did not see one bit of plastic on any of the beaches, estuary walks or quay sides, which you would find down south where I live.

An update on my activity re: plastic. I continue to seek out unwrapped vegetables, but if what I want is in a supermarket wrapped in plastic, I pay for it, then unwrap it and give the plastic wrapping to the supermarket cashier, saying this is what Sir David would want us to do. Actually that plastic is not recyclable, but it’s the principle. If you do this you’re alerting the supermarket that the plastic is unwanted. Also each time I’ve done it, people have been very polite, and most times have said, the supermarket is working on reducing their plastic.  But, readers, I don’t see anyone else doing this. What do you think?

37 thoughts on “I’m back in Brighton once more!”