Today the weather in the UK is mostly cold and foggy with the temperature down to -3C. What a contrast to the 28-30C I’ve been experiencing for the last 15 days.

The Caribbean was great: the colours, the flowers, the sun and the warmth, the beauty of those islands.  Yet despite visiting 11 islands I have some mixed feelings.   For a start, you only scratch the surface because there are thousands of islands in the Caribbean with 28 countries encapsulating a myriad cultures and numerous languages all of which bear witness to an often ugly history of slavery and expropriation of wealth.  So, I kind of loved this holiday and didn’t.  The best part of  the cruise though, was seeing my old friend Olivia who I got to know at the Maudsley nursing school nearly 50 years ago!  When we met it was as though we’d seen each other only last week instead of 17 years ago.  The trip was worth it just for that meeting.

And.  I think I’ve got cruising out of my system, folks.  Yes, I won’t be going on a cruise for a few years.  Why? Well, I think it’s miraculous to sleep on a bed that isn’t vibrating and in a room that is silent rather than with a constant racket of engines and stabilisers roaring away.  Because very unusually for this time of the year, the sea was not a millpond. Try eating your lunch with 5-metre waves reaching up nearly to the windows of the restaurant.  Consequently, I’ve put on precisely 1lb in weight because I ate well some of the time, sparingly at others (when it was rough seas – which was quite a lot of the time) and then by the end of the 2-weeks nothing much at all as I cannot face meal after meal after meal.

Hopefully I’m not sounding too negative because it was so good to be away during the cold weather.  However, I realise I’m not your typical cruiser.  Typical cruisers are people who do up to 5 or more cruises a year.  Four hundred out of the 900 passengers on this cruise were staying on for their 3rd consecutive cruise, as in, their 6th week on the ship.  If I stayed that long I’d be chewing the carpet for i) fibre.  They use vegetables purely as decoration.  And ii) the lack of intellectual stimulation on a cruise; no internet; wifi; news; television; box sets; films; newspapers; radio4; podcasts; art galleries.  Well there was one ‘newspaper’ – a four-page A4 size daily, Daily Mail.  What!  Really? I’ll be complaining about that as there’s an assumption there that passengers read only one type of newspaper – no, they don’t!

Here are a few pics.  Remember all my clothes are either from charity shops, the very cheapest end of the High Street, or the local Caribbean market.

And yes, that headline. I had a flare-up of my eye condition so couldn’t wear contacts or eye makeup for virtually the entire 15 days away.  Obvs, you don’t wear contacts when swimming but in the evening?  Nope, couldn’t put a thing on my eyes!  And I hated that. Funnily enough both Catherine of Atypical 60 and Tricia Cusden of LookFabulousForever have written blog posts on women and makeup, with Catherine deriding the fake no-makeup look and Tricia saying we do need makeup as we age.  And yes, I really, really do agree with that.  I think I’ll start a hashtag along the lines of #oldladiesneedloadsofmakeup  Speaking for myself, not only do I not look good wearing glasses (and I think you can see the evidence below at the end of this post) I do not look myself! Which for decades has been a person wearing eye-liner and mascara, which I will continue to wear until I’m 99 and beyond! End of rant. 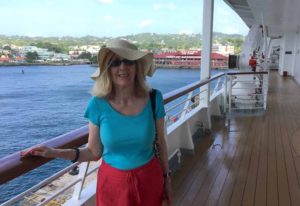 OK, this pic is taken in Tobago on a very hot day and shows you exactly what not to wear: a tight T-shirt and heavy red linen pants. This combo is a complete no-no.  We didn’t see much of Tobago just the market. But in this market I bought what you should wear! 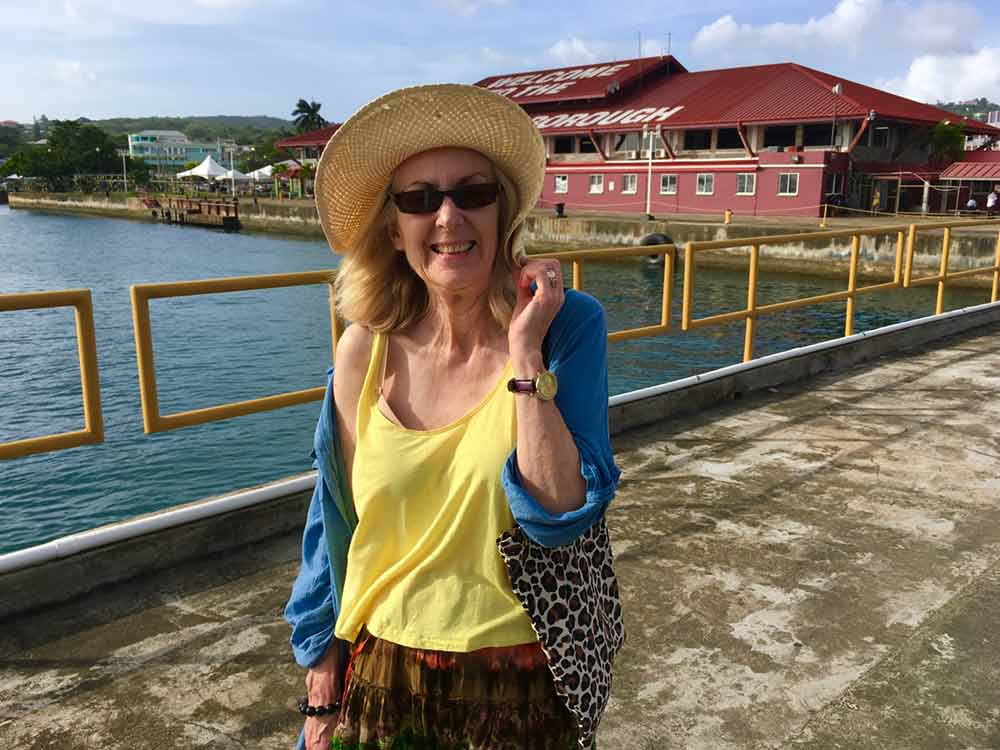 This skirt was a lovely flappy cotton delight to wear and I wore it nearly every day.  Yes, don’t take loads of unsuitable T-shirts and shorts (which I did) instead buy the gear when on holiday and put money directly into peoples’ pockets.

Here’s another look at the skirt in a beautiful tropical garden in St. Vincent.  The black T-shirt was a bit of a mistake as was the white shirt – too hot. 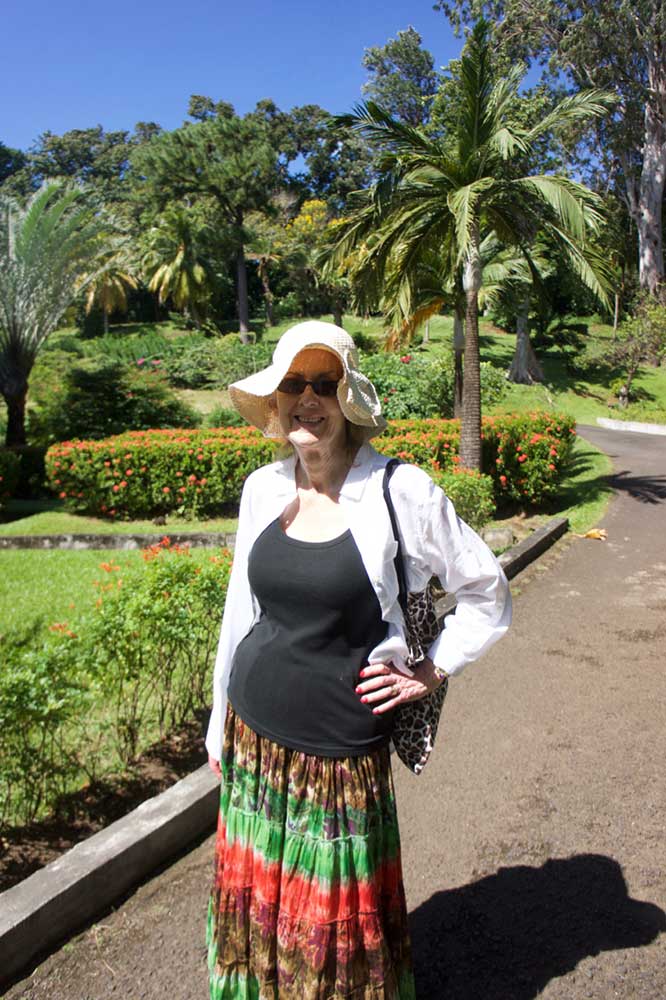 And here it is again in Tortola, British Virgin Islands, where we visited a tiny museum that told us a great deal about the history of the island’s origins, which was both fascinating and somewhat disconcerting – the vileness of slavery is beyond belief.  How, you ask yourself and of course, it was all about commerce and profit. 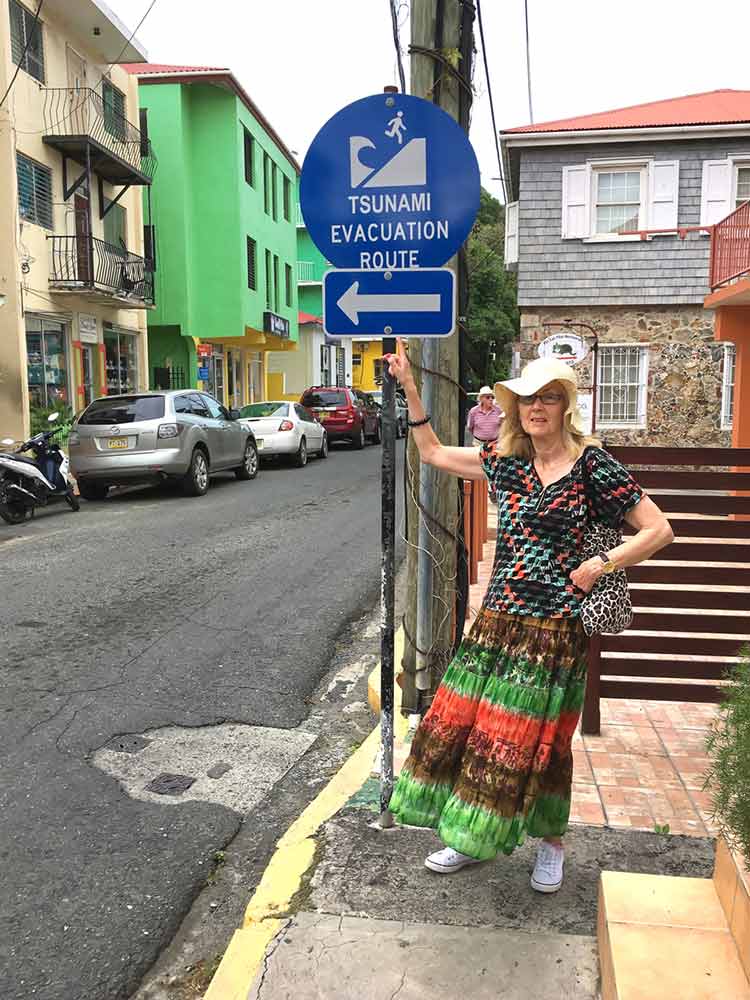 Parts of some of these islands are awfully flat – the sign pointed to a nearby hill. 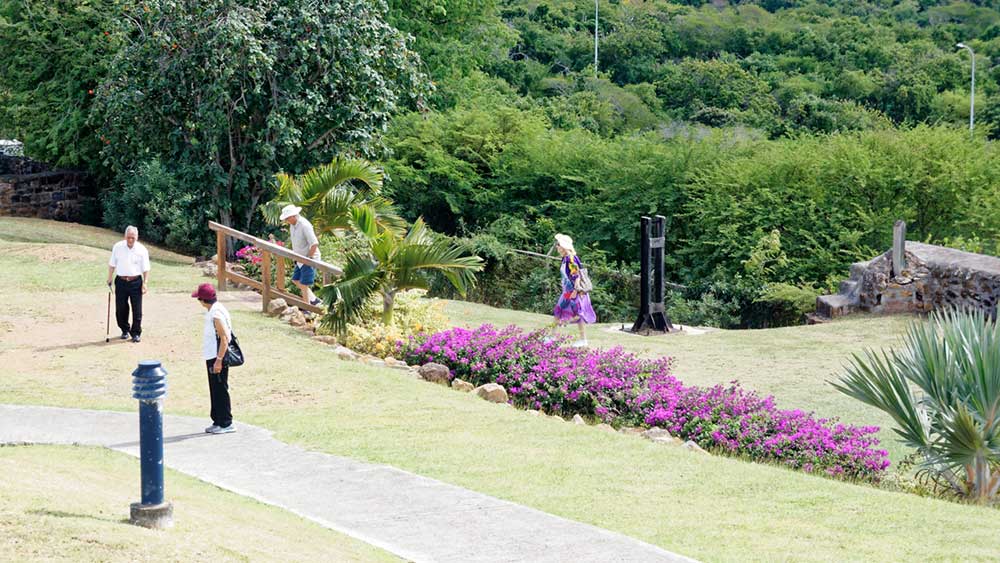 Here I am blending in with the flowers in Antigua.  This was another dress bought from a market along with the ubiquitous flowery shirt – it was cool to wear.

But I did wear a pair of shorts! 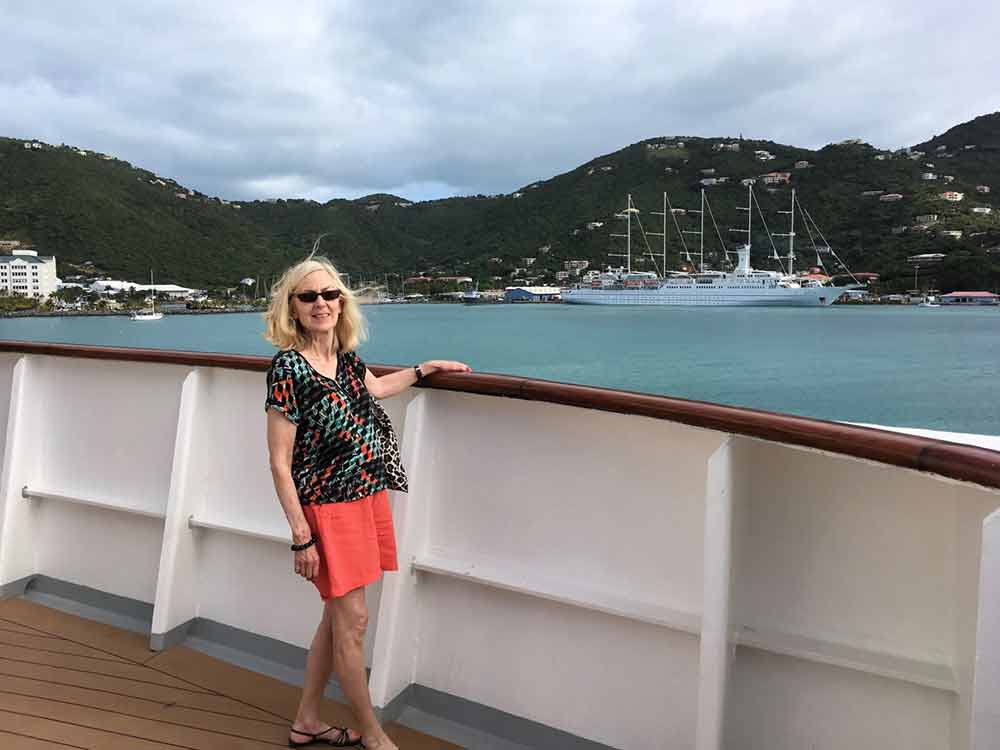 Here are my legs exposed to the world and that T-shirt again which was surprisingly cool as it was loose.  This would be about a week ago – what a contrast in temperatures between the UK and  the Caribbean!

And here is Mr Frugalfashionshopper and me looking like a couple of old dears sitting on a wall above a couple of the many harbours of Antigua.  The internal S-shaped harbour is known as ‘Safe Harbour’ as for centuries it’s sheltered ships during hurricanes. 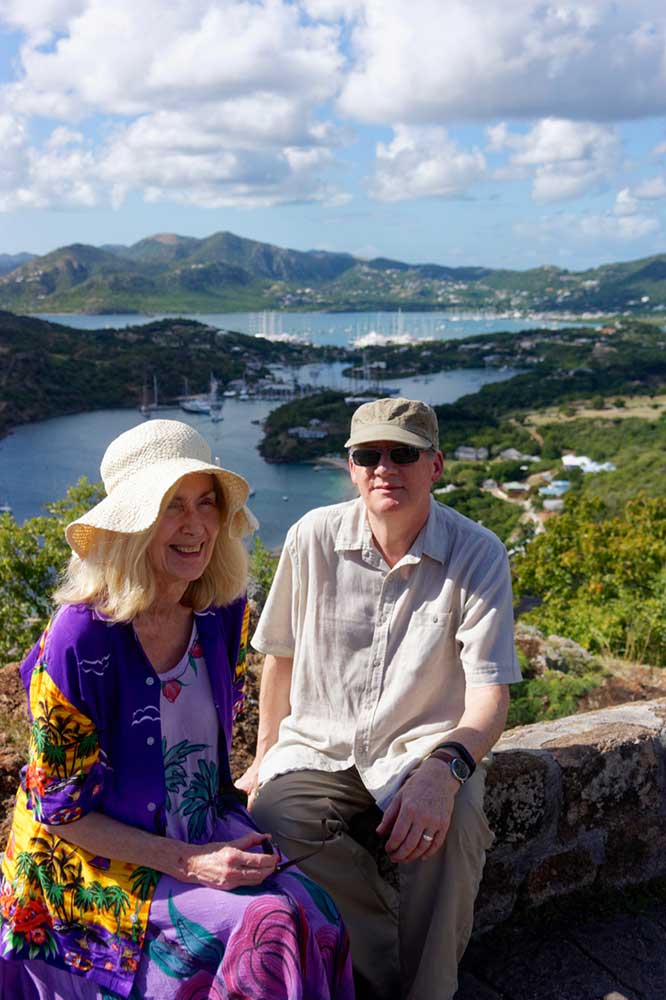 I’ve taken the glasses off, but not a good look as my eyelids were playing up that day. However, ignoring that, look at the wonderful colours of that dress bought locally plus the shirt, all worn in the glorious island of Antigua.  And I wore that hat every day.  However, as it had been stuffed in the overhead locker coming over and then rained upon (nearly every day) it was so out of shape it wasn’t brought back but went straight into the bin at Barbados airport.  But not bad for a 5-year-old hat that cost all of £3 at Peacock’s.

By the way, we were taken to part of the island where you could just about see Eric Clapton’s house and were told of his philanthropic life in Antigua, which includes the setting up and maintenance of a state-of-the-art drug rehabilitation centre all free to Antiguan residents.  After quite a long description of this from our guide someone said, ‘who is Eric Clapton’?  O.M.G people, where have you been! 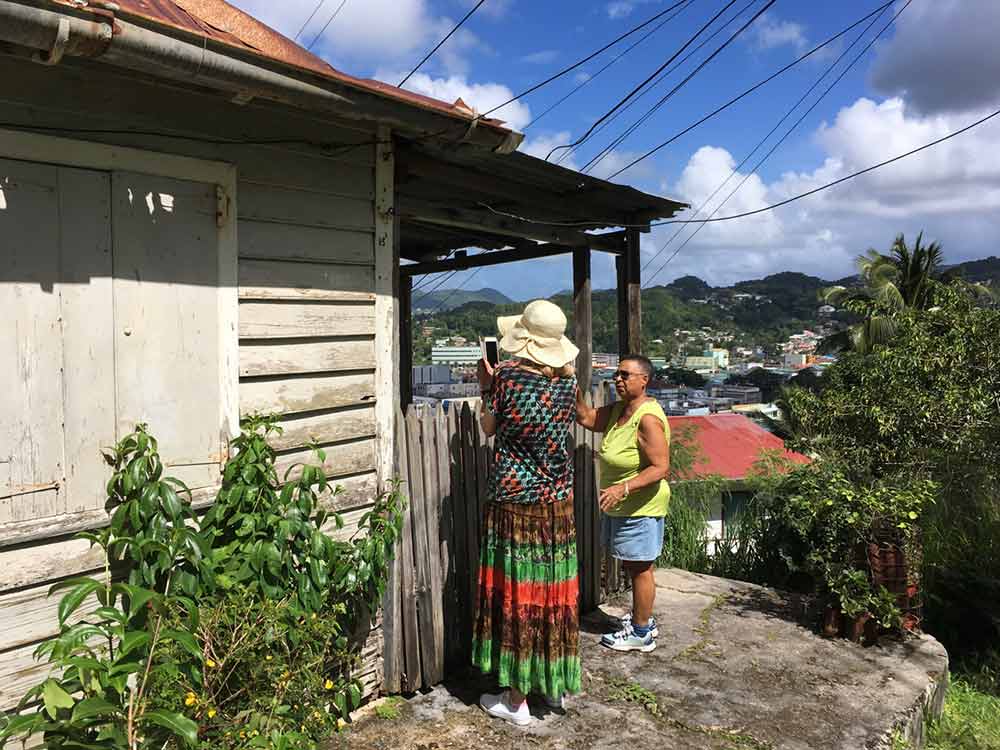 The highlight of my trip was seeing my friend Olivia in St. Lucia.  I hadn’t seen her in 17 years.  We were nurses in the same set at the Maudsley and Bethlem Royal Hospital and met over 48 years ago – feels faint and needs to sit down!!!  Honestly you’d think I’d get some better photos of the two of us – but instead there are lots of action shots of us talking and chewing the fat.  We had such a short time together but no matter, we met and that was all we needed to do. 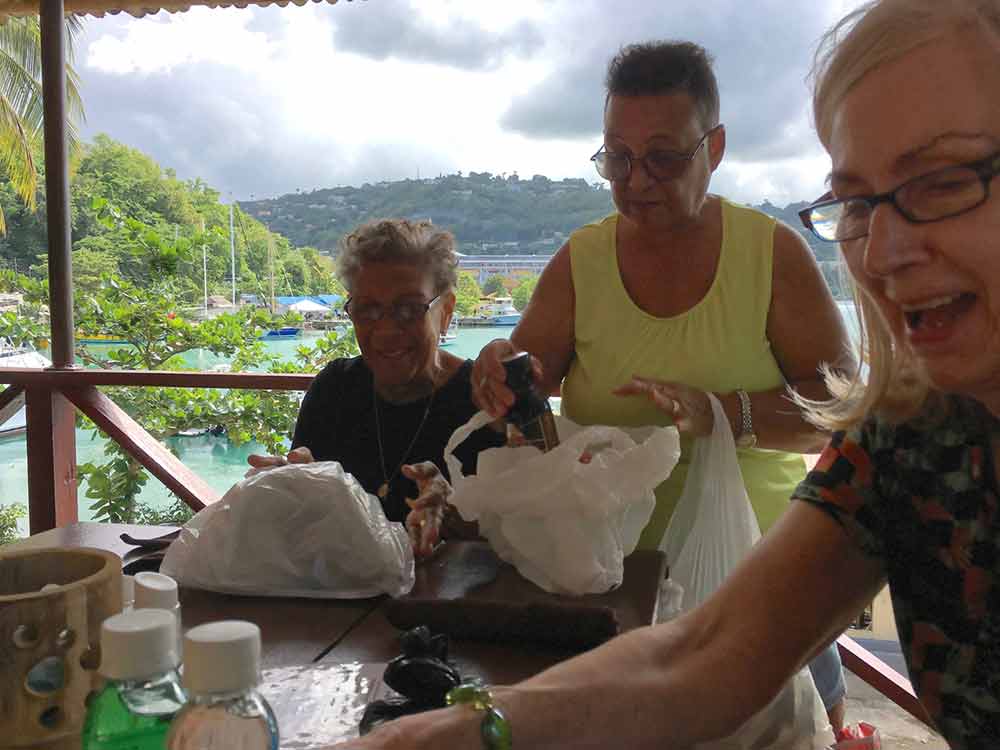 That’s Olivia with Joyce to the left of her and me to the right looking suitably goofy.  But a good time was had by all.  I’ll have to go back and see her for longer!

Now here’s the evidence that wearing contacts is best for me. See the pic below. 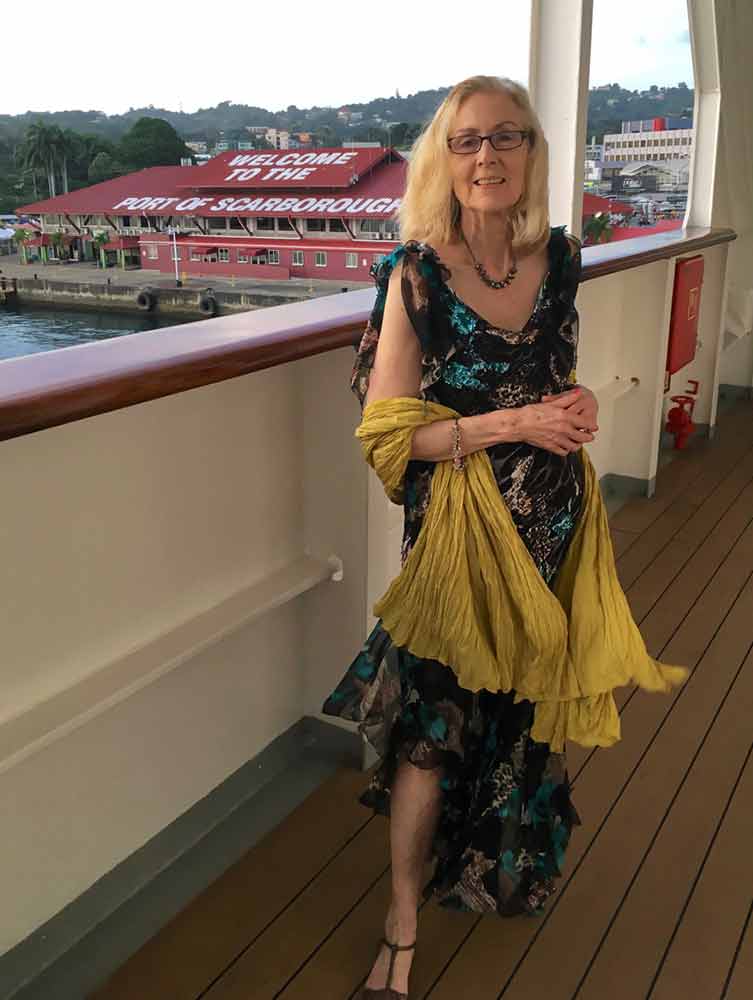 Nice dress and all that, but… now compare. 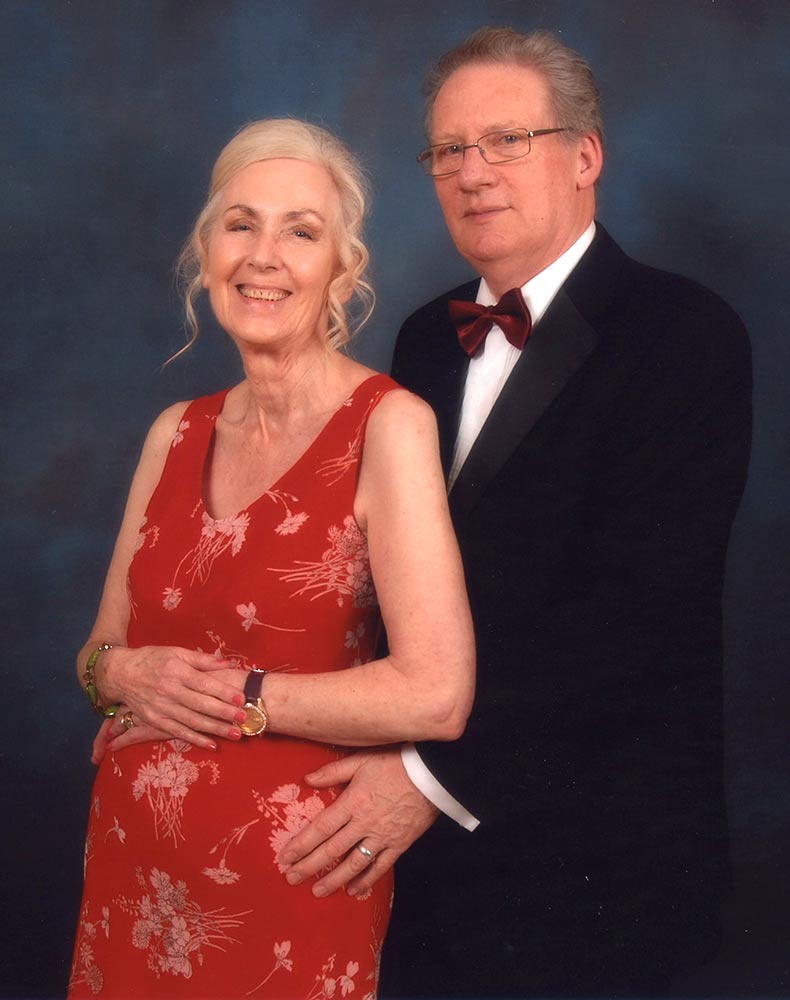 Yes, it’s one of those cruise portraits taken on the last but one day when my eyes had improved, but I know which look I prefer. 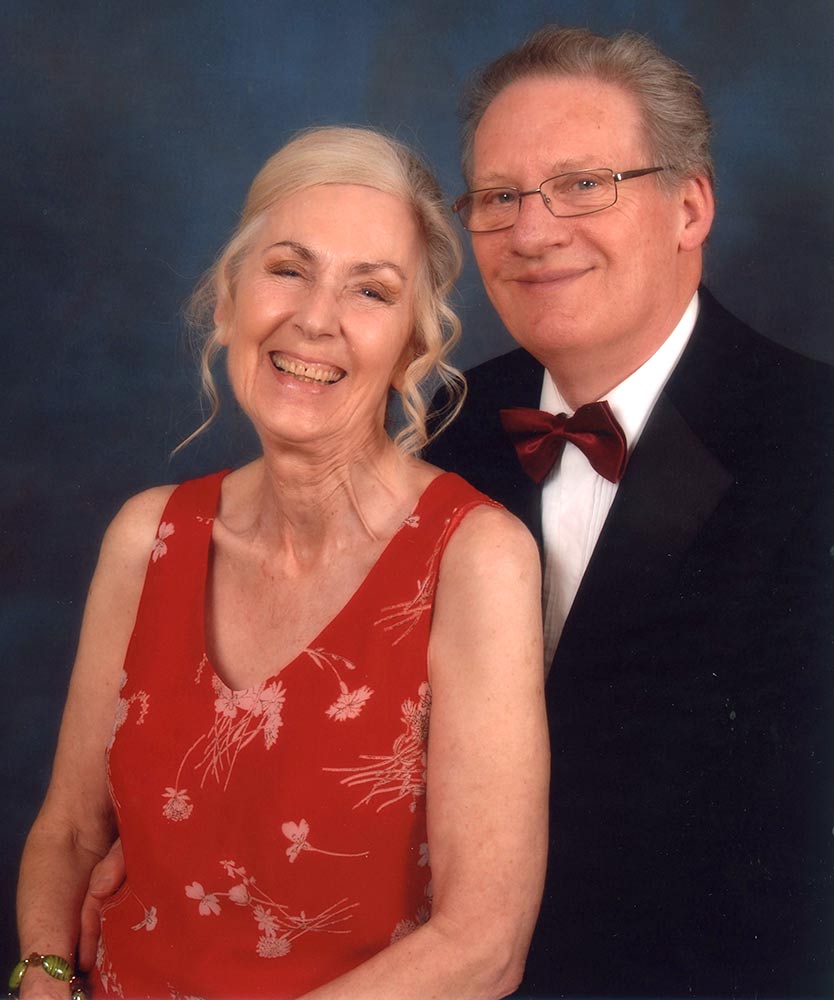 I’m a happy bunny looking like that.  As you can see my hair is up in a French pleat and I’m getting whiter. Still a way to go but into my 70s and 80s I intend to be a wild, wild white-haired woman.

OK, back to normal from now on with posts to come on issues such as de-cluttering and down-sizing as well as the joys of makeup and charity shop clothes.

Until then, with love to you all

PS. And sharing with Catherine of #iwillwearwhatilike and Judith and her #hatattack January session.

20 thoughts on “I’m back! And wearing eye makeup again”