I’m back and I have to say that the day after we returned we wondered if we’d ever been away as we threw ourselves into unpacking the suitcases plus the unpacked boxes we’d left and by the end of the day, we were exhausted!  But hey, after another day both the suitcases and all the moving boxes were empty and we are completely unpacked. That’s actually amazing as on the 31st August we’d moved only 15 days before and we’d spent 8 of those 15 days in Norway! There are issues like the plumbing and electrics to fix but really, as one of our visitors said, we look as though we’ve lived in the flat for years!  Big tip: it helps if you haven’t got much stuff and have decluttered beforehand and you continue to declutter!

I will do a post (?the next one) on the move and the new flat, and I will show you that we do have ornaments and a certain amount of possessions (!) but this post is about the cruise.

We went with Saga. Most Brits will know this company and perhaps think it just caters for the older customer. Well, yes, but don’t all cruise lines? The reason we returned to Saga is that we remembered its high standards and wondered if they still kept to those lofty heights. And people, they did. Saga has very high standards of customer care – and no they are not paying me to say this.  But it starts from being collected from your door and that’s no matter where you live. You have to pay extra if you live more than 250 miles from the port, but everyone we spoke to said the drive to the ship from anywhere in the UK is what sells it to them. 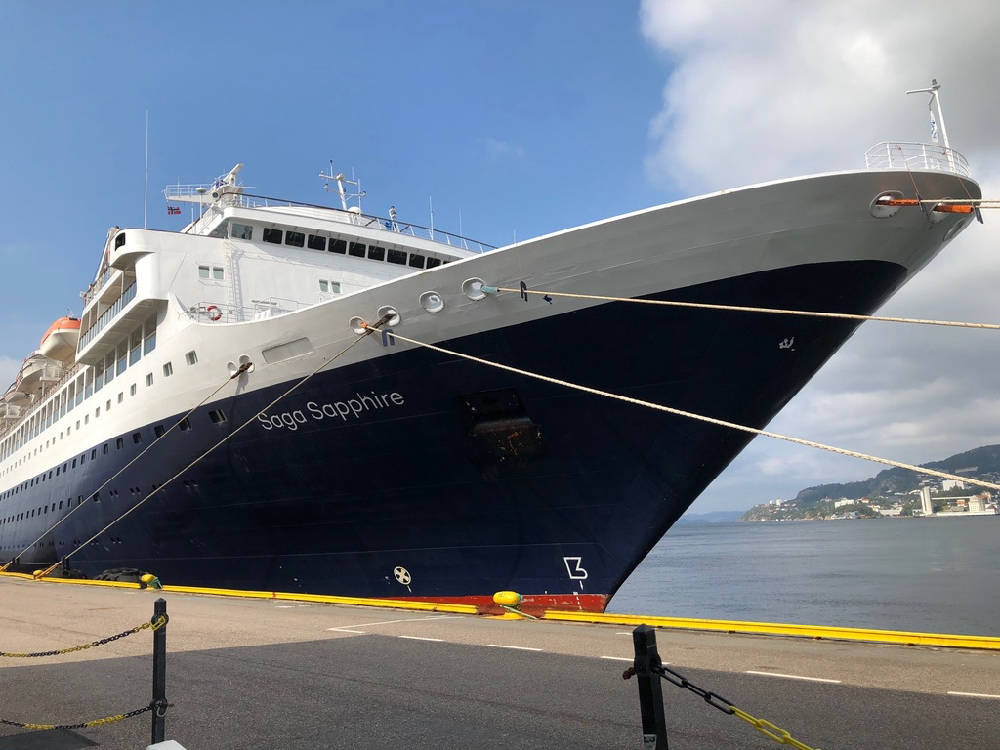 Note that this is proper ship and not a block of flats. Re: the lack of balconies (there were a few). I’m not the least bit interested in having a balcony as if you want some fresh air just get out of the cabin and go on deck! But very sadly this lovely ship is being retired next year and two brand new all-balcony ships are coming in to replace her.  All well and good, ships do get old and have to retire but the thing is the size; the Sapphire carries around 700 passengers, which is great, the new ships carry 999, which looks as though they’re keeping it at under 1000.  But not sure about this increase as, like other passengers who always travel with Saga, we love the experience of sailing in smaller ships. We’ll see.

And btw, we usually sail in steerage (the lowest deck) as we don’t think a cabin is all that important but the cabin we had on only a slightly higher deck (6) was about the size of our new flat’s sitting room! The pic below was taken with me standing in the middle of the room! 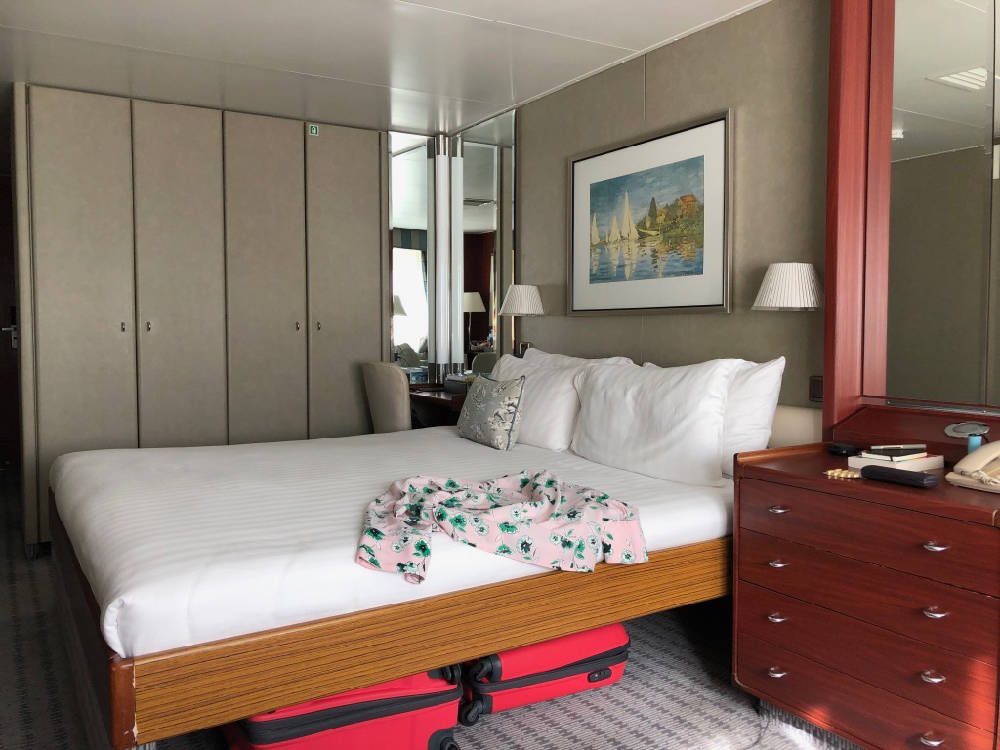 Turning round from the middle of the cabin you’d see arm chairs and a table by the window.  Someone with a balcony (deck 10) said that the balcony made their cabin quite small.  So I think we did quite well lower down as it was great to have this sense of space and also, you know what they say: the more you pay, the more you sway. Absolutely don’t go top deck if you’re crossing the Bay of Biscay! And btw, the bathroom had a bath.  So altogether, 10 out of 10 for the cabin.

This is a dress you’ve seen before. I wore it for the first night on board ship. 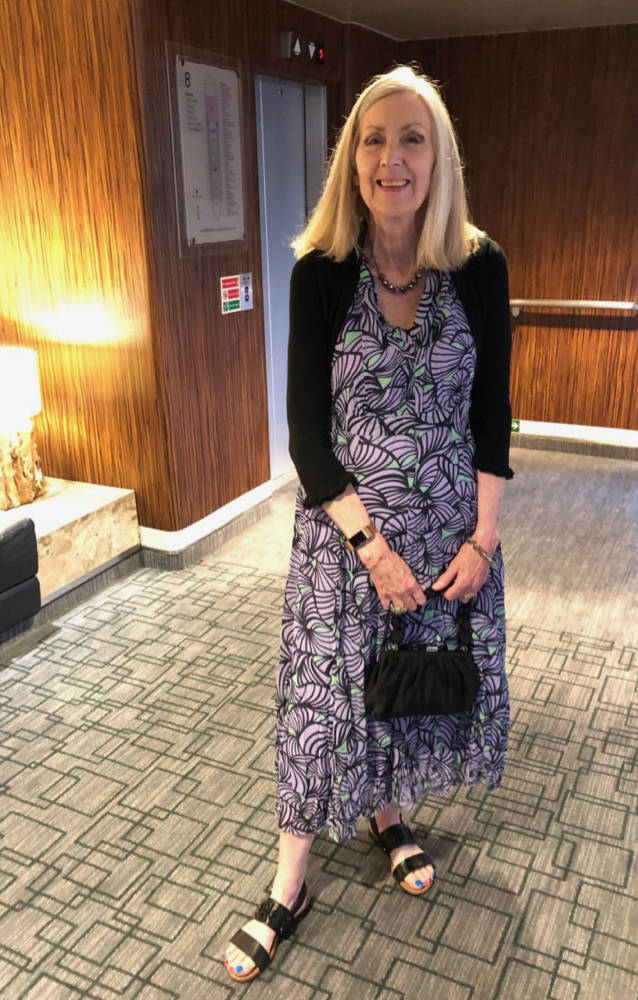 Note the blue nail polish on my big toe that matches the dress. In fact, I had 3 different colours on my toes.  Dress and bag charity shopped, of course.

Our first port of call was at Haugesund, which was not somewhere I’d been before but it was OK.  We had a great guide for our tour of the sights and the views. 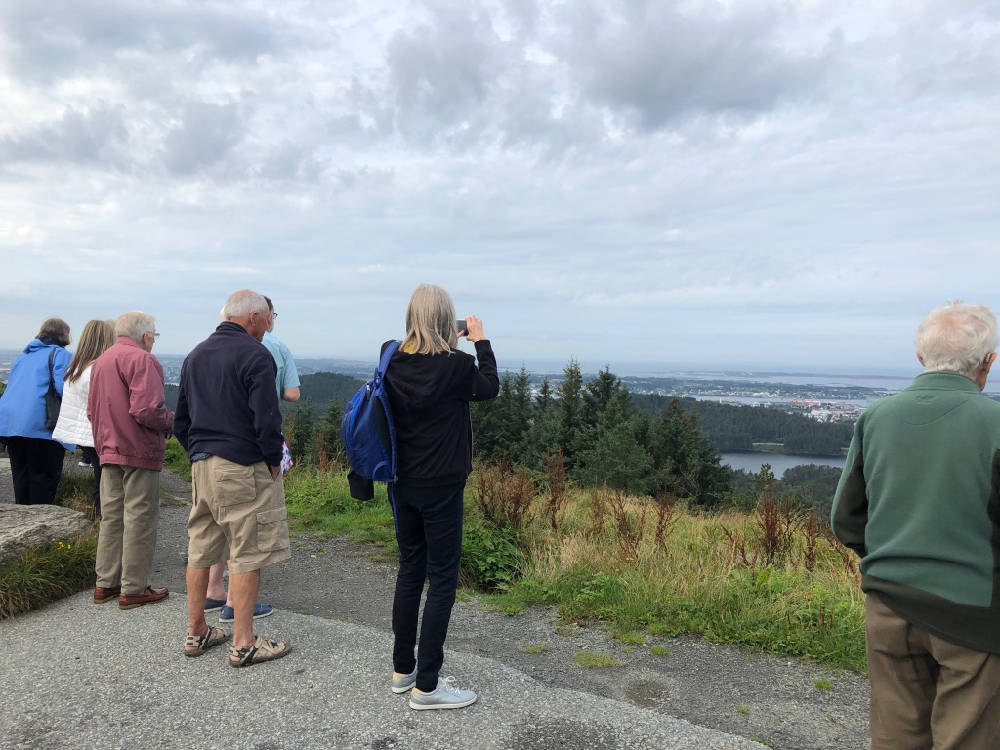 I wore my black skinny jeans here.  The temperature in Haugesund was mild but a fleecy top was needed at this height.  As per usual I did not pack the right clothes!  The thing is I’d packed a week before the move and the move was 6 days before our cruise, and all the time the weather forecasts were for rain plus cool to cold weather. I packed 3 jumpers, a cagoule plus a rain hat and Mr F had his long fleece-lined raincoat (all unworn) and we both brought umbrellas. In fact I was so worried about the flimsy mac I’d packed that I went out and got a long mac for myself.  And then on the first day of the cruise the weather forecasts changed (too late for me to repack) and from about the 2nd day onwards we had really hot weather for Norway.  And did I have anything for hot weather in my suitcase? No I did not! But I’m not complaining as the weather made Norway look its absolute best – we were so lucky as rain is the default weather for this country!

That night was formal night and here I am in my favourite cruise frock, bought in 2012 from a charity shop for I think £15. It has a Monsoon label and is made from that lovely devore velvet. 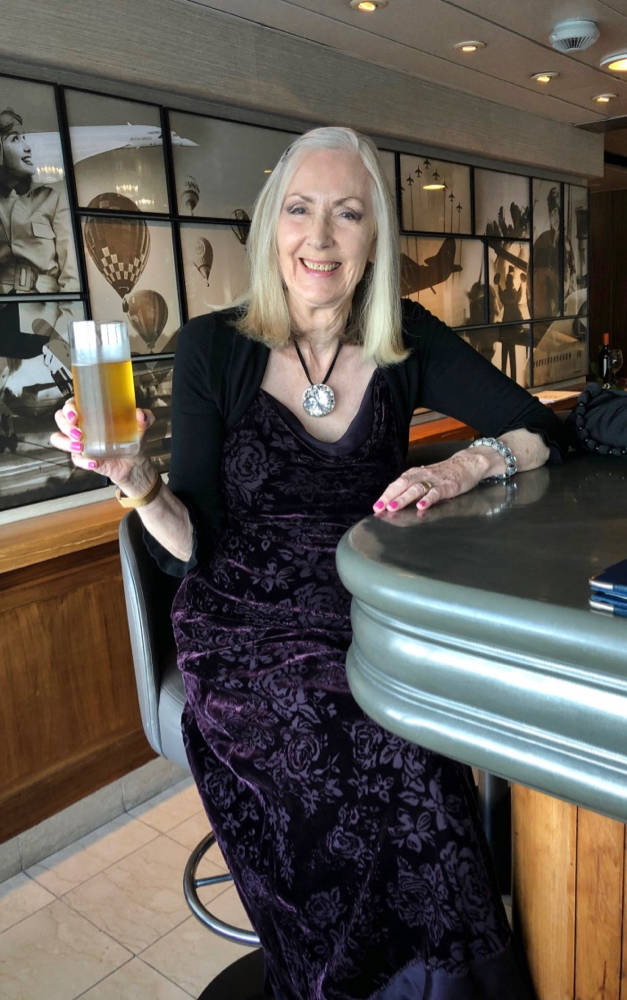 Cheers! Fortunately they had a good zero-alcohol lager, which is my go-to drink as it’s not sweet. Haven’t drunk alcohol for over 20 years now and I have forgotten what alcohol does – it is not something I’m bothered with.

Here’s our approach to Bergen, our second port of call, which is such an interesting place to visit. What I love about these Scandinavian countries is the colour of their housing stock – the yellows, ochres and blues are so cheerful! 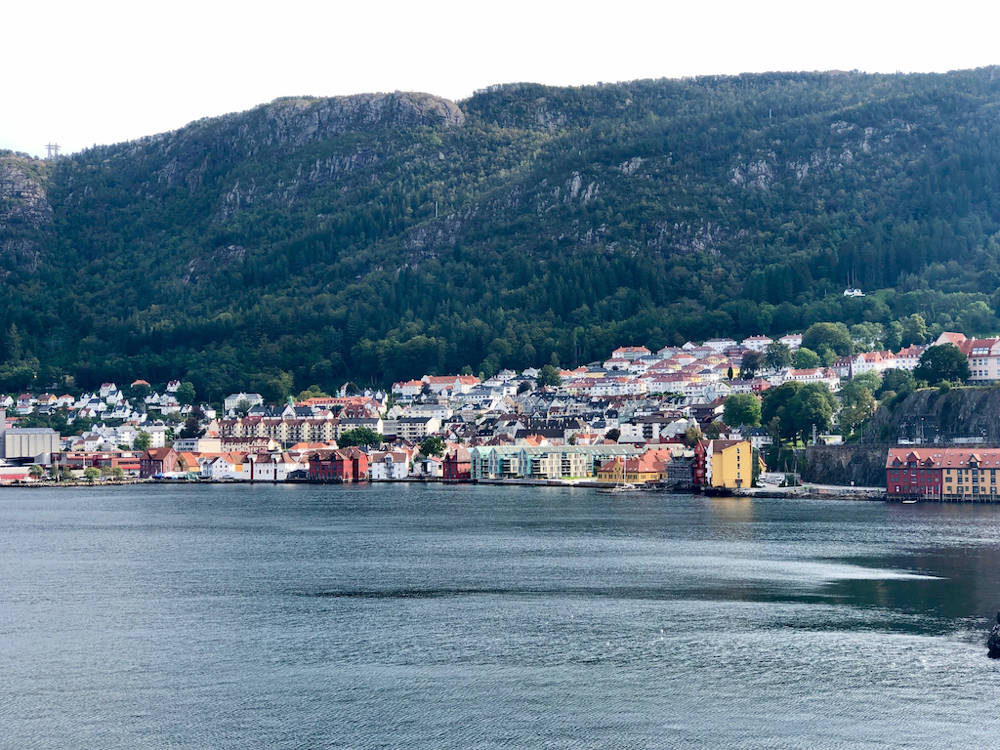 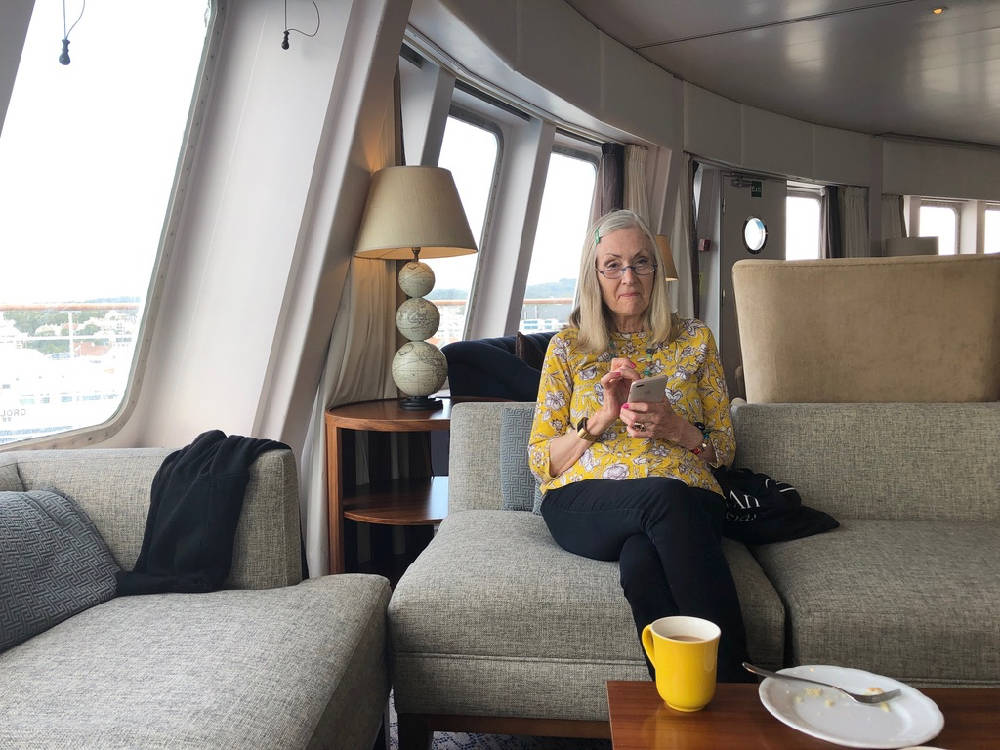 The coffee on this deck was good. 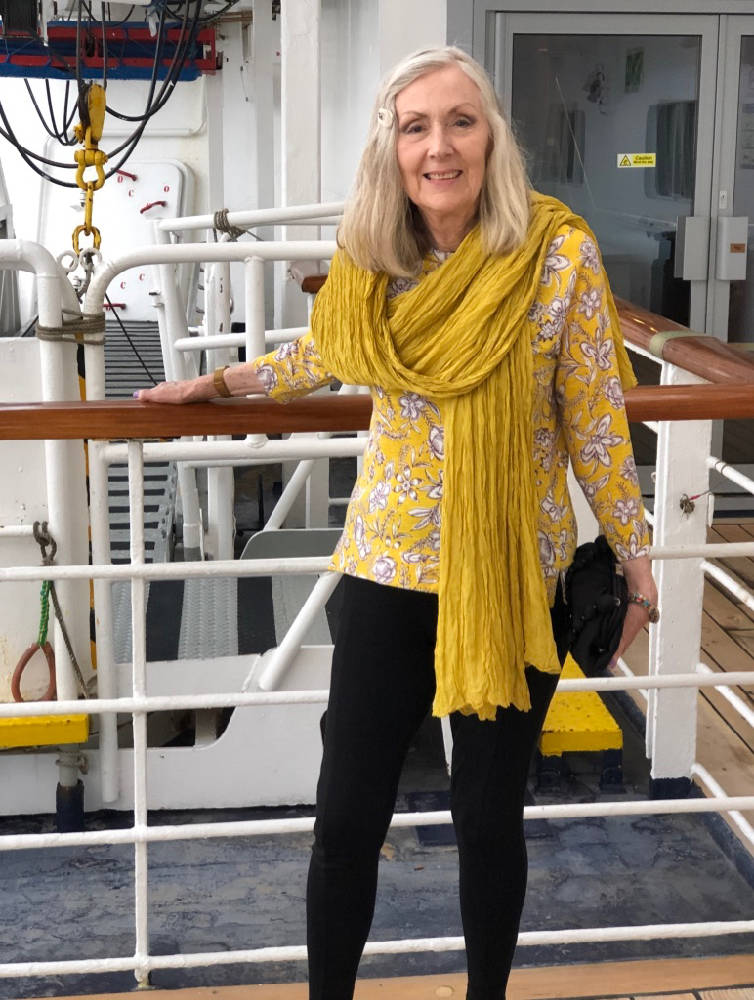 I didn’t take any pix at Flam, which was our 3rd port of call, as the day was so hot I could barely function – everyone kept saying we’d come to Flam on one of the 3 days of hot weather they get annually!

The place on the cruise I love most is Skjolden, which is right at the innermost point of the longest fjord, the Sognefjorden.  There’s nothing there, no infrastructure to speak of, just a tiny picturesque village. 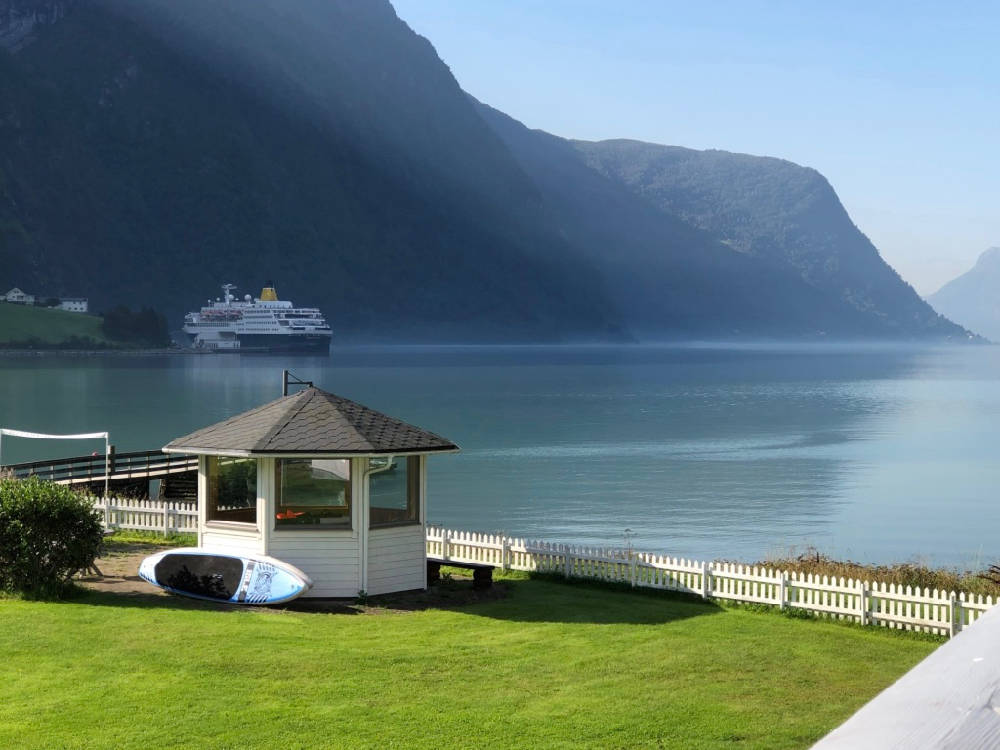 This is the view from the community centre where we had a coffee, and I bought a hat. It’s a bright orange hand-knitted beanie made from locally spun alpaca, which is wool from an animal like a llama, but not.  So I have taken home a little memory of this beautiful spot and you’ll see it in another post.. We were only there for a few hours and then we cruised back through the fjords. 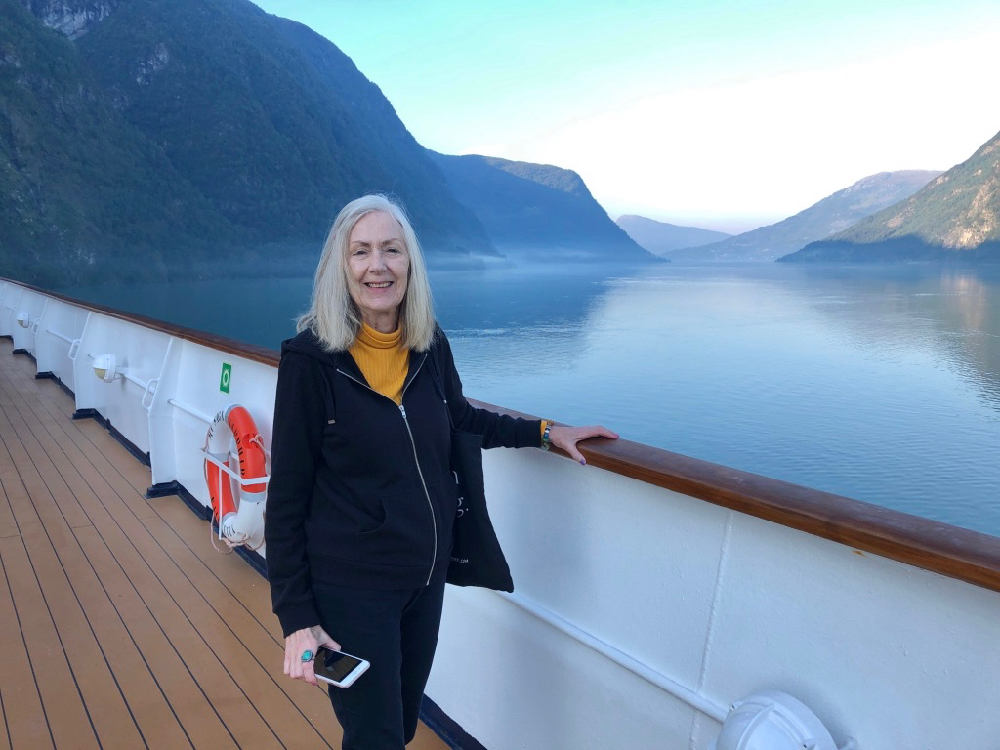 This is what I came for. 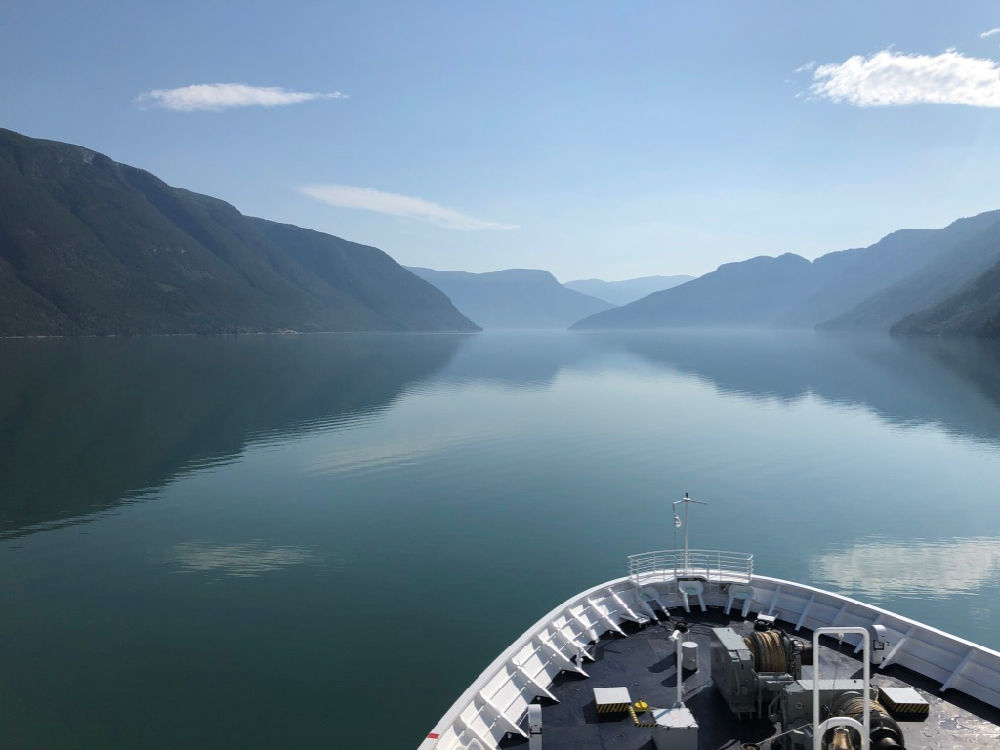 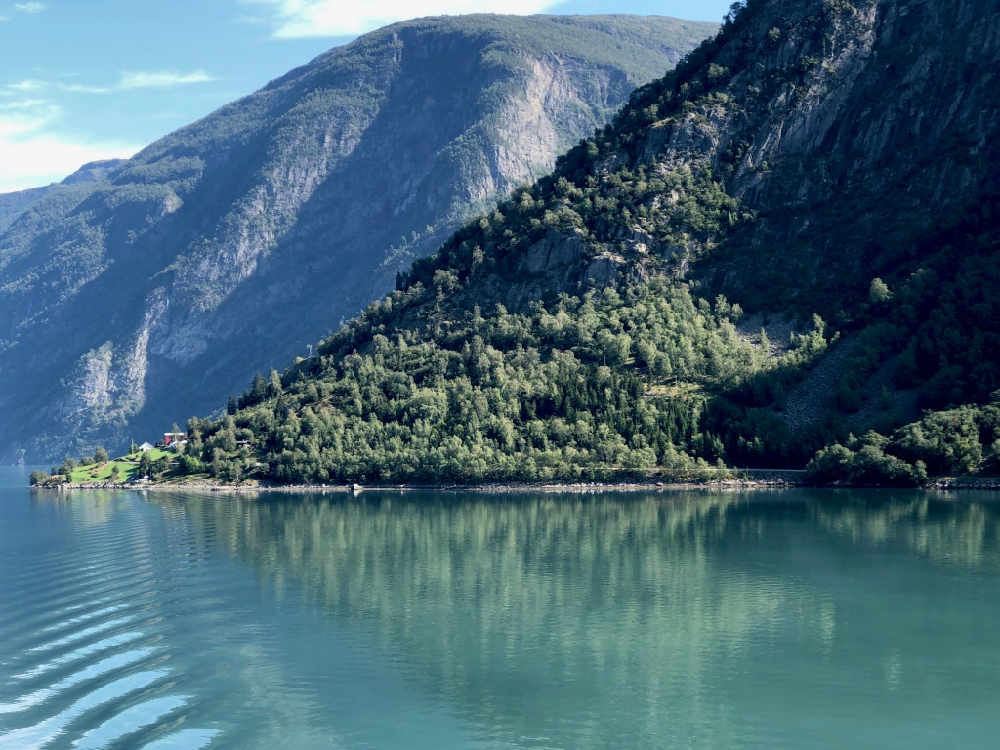 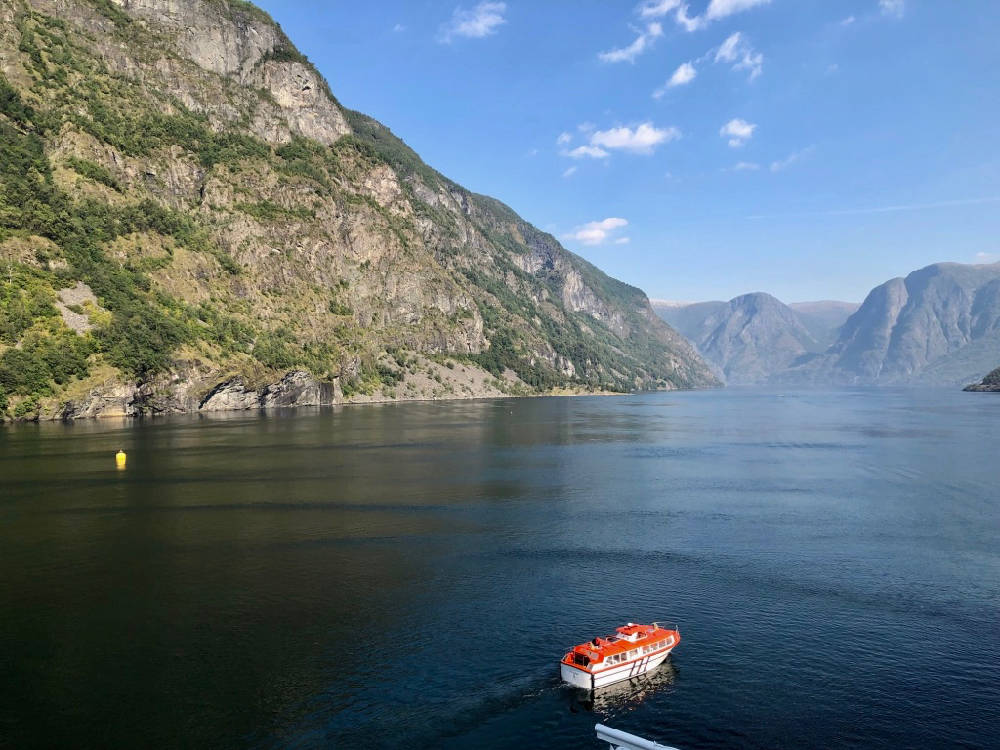 Along the way we’d see houses on the shoreline which quite obviously you could only reach by boat. 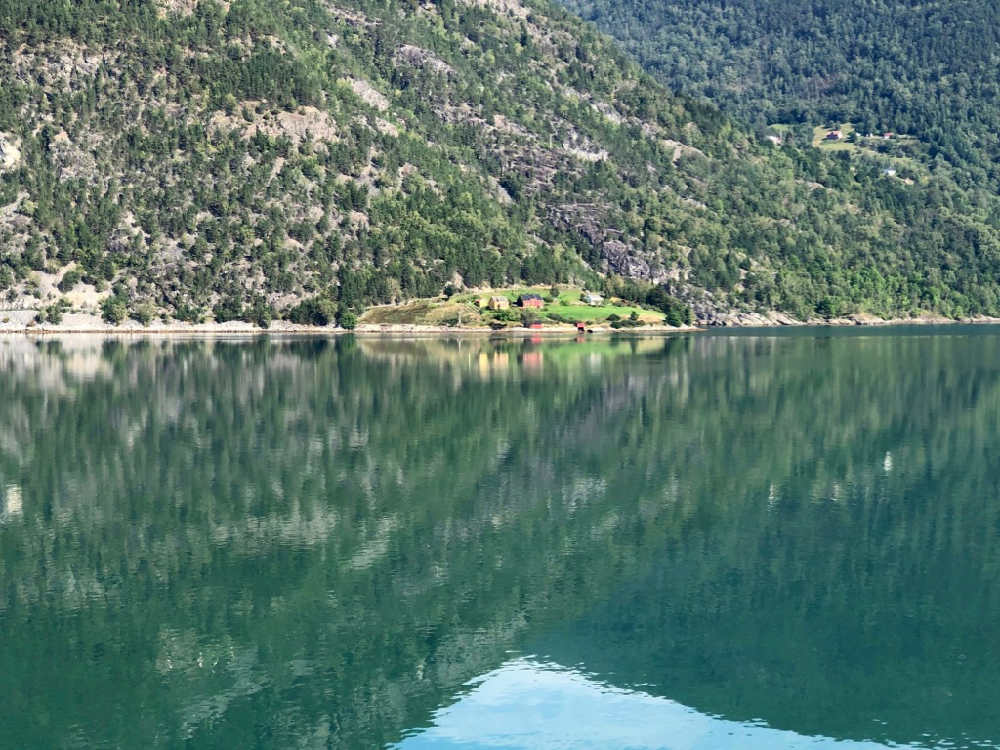 Our next port of call was Stavanger which is a vibrant little town with lots of little shops that resemble a small upmarket Ikea. We always go to these and buy at least one thing – again for the memory of the trip and because they are not tourist shops. 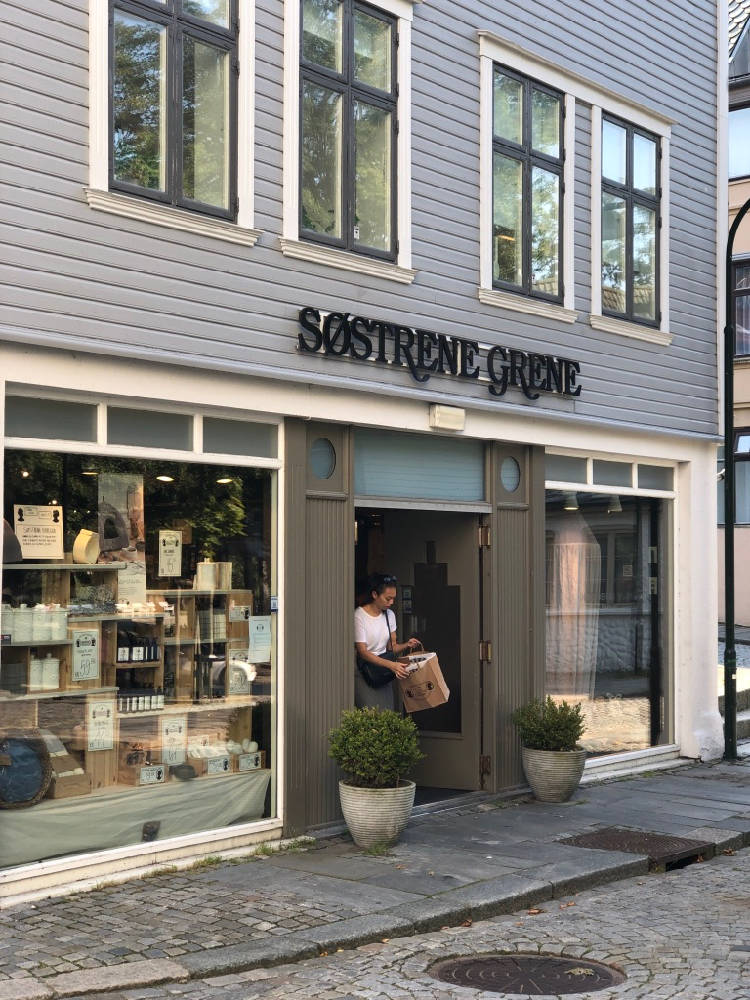 On our last formal night I wore this charity shop dress bought two years ago. 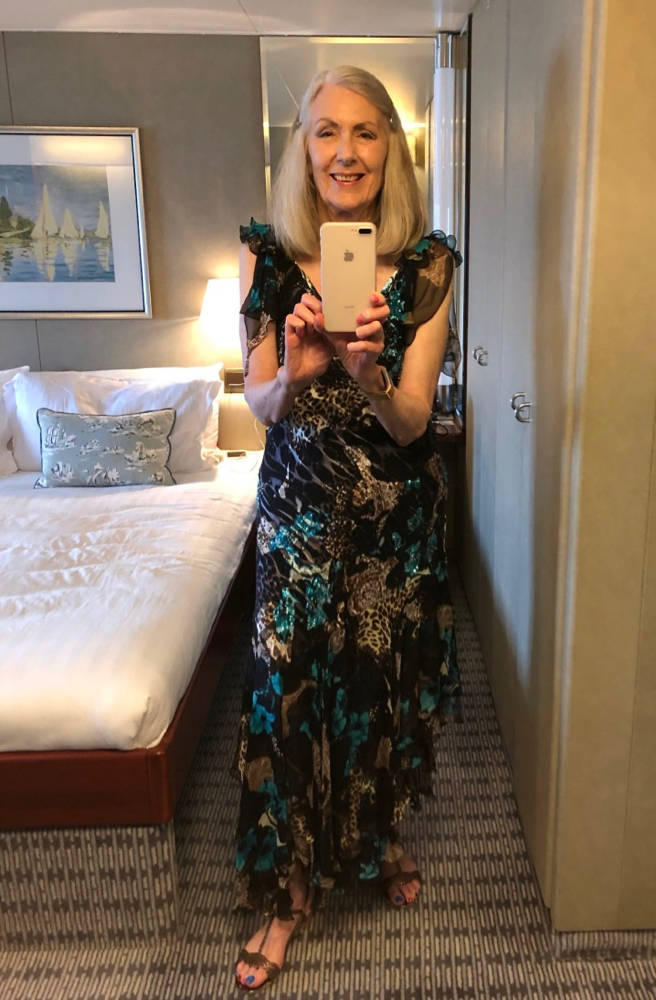 It’s a (UK) size 16 but very accommodating as the material is stretchy so it fits me when I’m my normal size 12 and expands as the cruise goes on. I put on 4 pounds with this cruise. 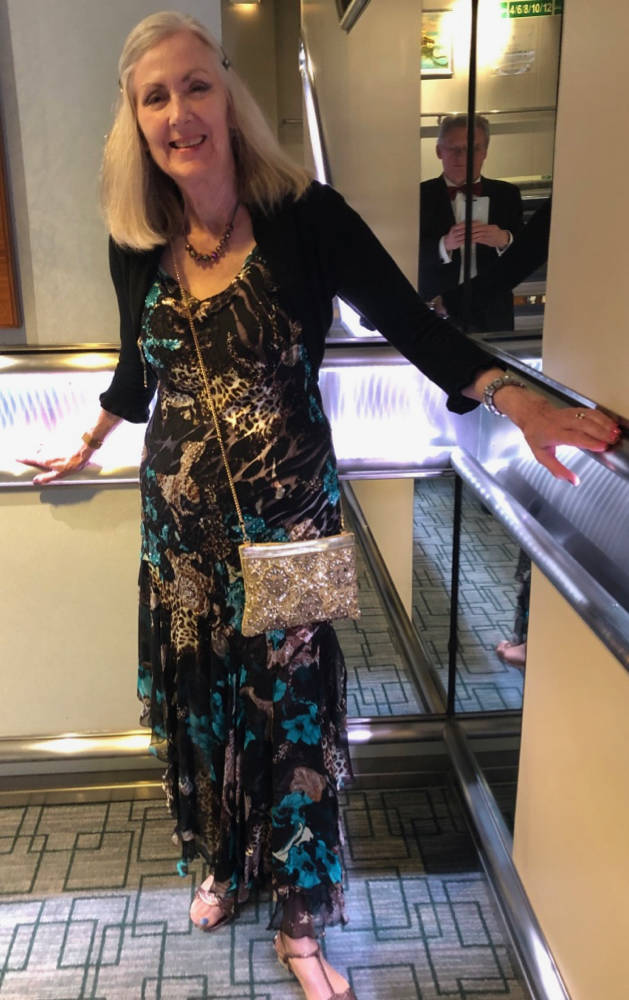 I can just see my gut beginning to billow out! Imo, the food on Saga is the best. But phew I couldn’t eat like that for long – it’s too much – and have already lost 2 of those 4 pounds eating normal food!

Despite doing a lot of this I was pleased to be sailing home. The North Sea, btw, was very benign this time, and that was both ways – it was flat as a pancake. 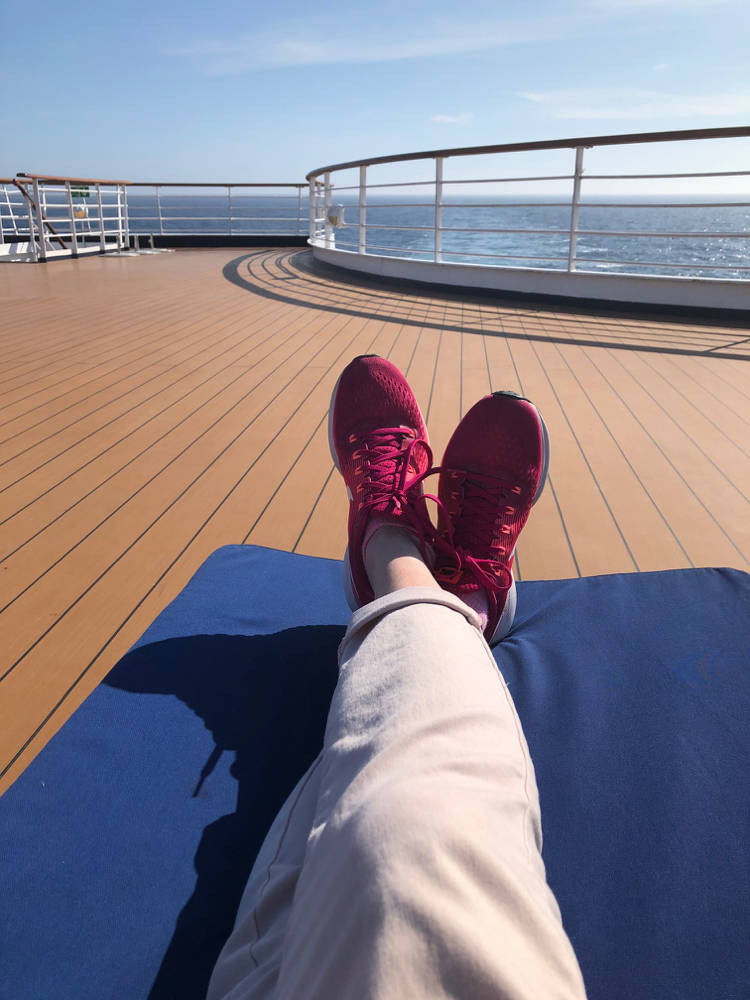 Yes, here’s the port of Dover – it was great to get back. 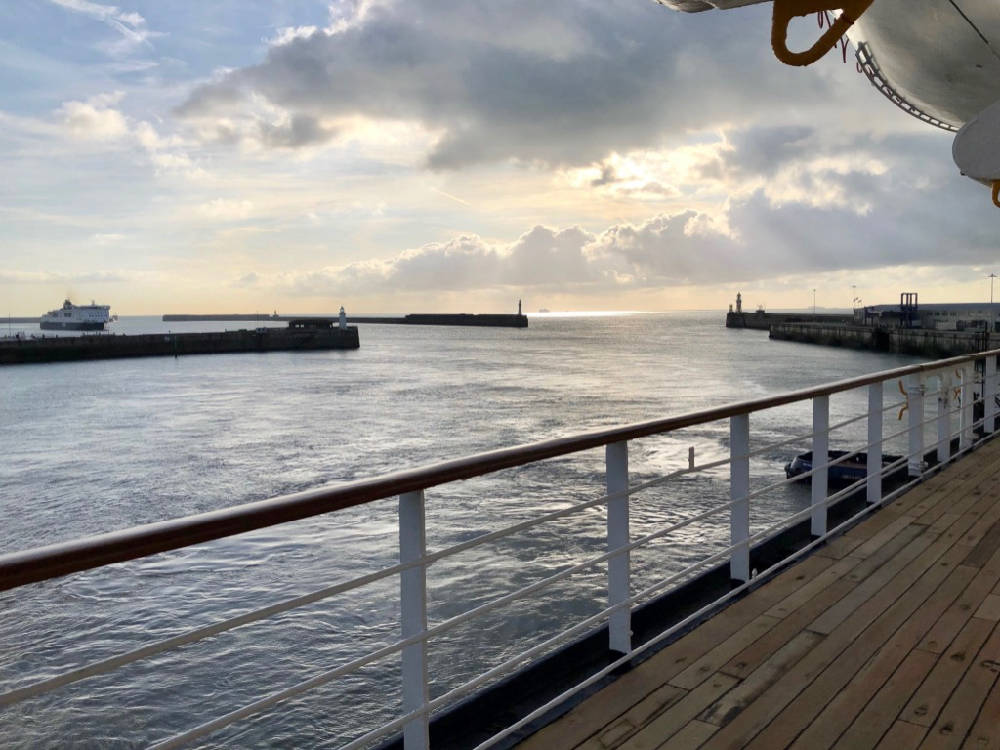 And that’s all for now.  Next post will be on moving news, the look of the flat and why I declutter.

27 thoughts on “I’m back and here’s some cruise highlights!”