Well not exactly, I went up to London to see the exhibition, Fashioning a Reign: 90 years of style from the Queen’s wardrobe.

The exhibition ticket gave you access to the Buckingham Palace State Rooms and while I consider these very fine examples of a slightly over-the-top decor that we seem to expect as appropriate for a palace (as in not really keen) the exhibition itself was excellent. By the way, overseas readers, I don’t totally go overboard in adulation over our royal family, but neither do I want to abolish our monarchy and have a republic, and especially not since our politicians have shown what a complete shower they are (but that’s another subject for another blog!)  Actually, I see the Queen as an immensely reliable and worthy figure-head for our country.  And wow her clothes!

First of all, you realise she’s quite small (160 cm/5’4″) and furthermore, that when she was young she had the tiniest of waists you could imagine. Even now her size is exaggerated by television and other media, so if you think that she is carrying a little bit of weight around her middle, when you see the actual dress or coat you realise it’s still quite a small size.

The hats, the coats, the neon coloured frocks – they were all there.  We also saw her wedding and Coronation dresses, both of which were superb.  But the gowns worn for State, overseas and other ceremonial occasions were truly beautiful.  I’ve often looked at what film-stars wear at the Oscars, or a film festival or a first-night but these formal dresses worn by the Queen are equal in beauty to any film star’s frock, and one or two surpassed anything that I’ve seen worn on the red carpet.  Wow – just wow. But as we weren’t able to take any photos you’ll have to go and see for yourself.

However, as we left the exhibition we began to wonder if these extraordinarily lovely dresses would have the same affect on the Queen as they were having on us.  There were so many of them, and they’re probably only worn once.   Are these dresses her uniform?  What does she wear when she’s off-duty and not in the public eye?  We looked for, but couldn’t find, any tweed skirts or comfortable trousers that she must wear when she takes the dogs for a walk and goes for a quick ride (or hack, I believe it’s called) because yes, at the age of 90 she still rides a horse. Click here for a few pics of our Queen with and on horses wearing some very comfortable clothes!  But apart from the lack of some sensible skirts that I’m sure she wears a lot, the whole exhibition is a delight.

I went up wearing that new (charity shop) black linen skirt I bought recently which is paired with a brilliant top bought separately (another one at £2.50) that echoes the orange in the skirt. 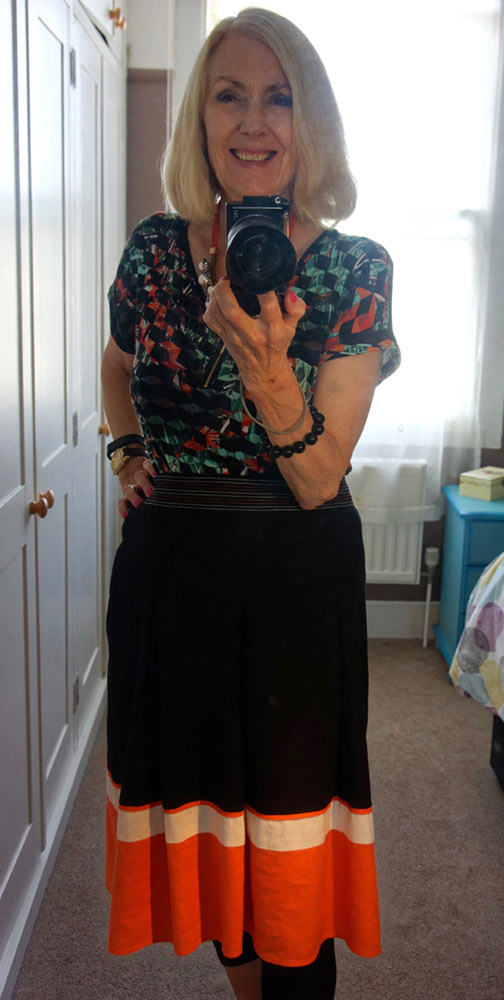 I had thought I’d wear a summer frock but the day started with rain and that made me change my outfit.

I topped it with a thin black jacket as it was still warm despite the rain. This was bought new in a sale some years ago. 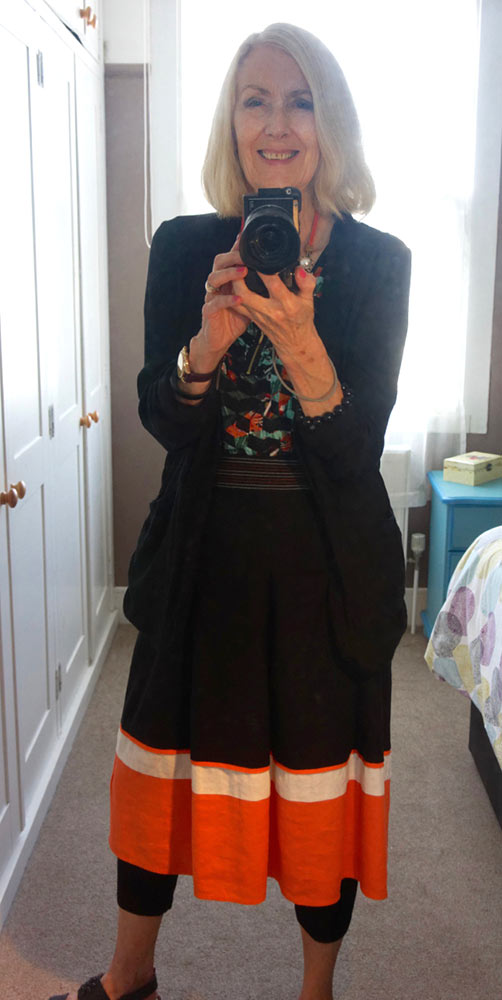 I still can’t go bare legged!  The leggings I wore in London were a bit longer than these so I had even less leg on show!

And then in my bag I stuffed this black charity shop mac, which I had just in case it rained, which it did!  I can’t remember the price of this item but it would have definitely been under £10.  As I’ve said before, I don’t do anoraks or cagoules. I don’t get them at all and wonder why people wear them as they leave your legs exposed to the elements.  If it’s raining I want to be completely covered up! Actually, I think there was a slightly edgy look to this outfit, as when I wore the mac in the rain I was still wearing my very comfy sandals.  And it was such a useful thing to take with me because we’d arrived a bit early and were sent away, so we went off to the bit of green grass in front of the palace and I got the mac out and we sat on it.   And there were no creases despite being stuffed in the bag and being sat on!

Before meeting my friend (I didn’t drag Mr Frugalfashionshopper up to town for this one) I popped in to that quite pricy but lovely Red Cross charity shop near Victoria station.  This time I found a really reasonably priced article of clothing, a new (as in unworn) swimming cossie at £7.  I was so pleased to find it, as just as I decided to look for a swimming costume all the summer clothes disappeared from the shops and they’ve got coats with fur collars in them instead!  Manufacturers of clothing, shop owners, buyers – it’s still hot weather!  Don’t put out winter clothing into your shops just yet, please! 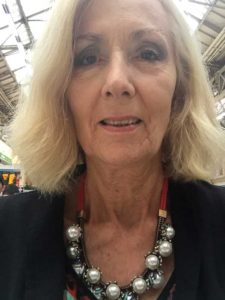 As well as the cossie I also bought this amazing necklace. Here’s me being quite brave and showing you a close-up selfie taken in Victoria station without the flattering lighting that I manage to achieve in my bedroom!

I had to have it as it matched my outfit!

P.S. Sharing as per usual with Catherine Summers and her #iwillwearwhatilike session.

11 thoughts on “I went up to London to see the Queen!”