I see a couple of my favourite bloggers have done a vacation questionnaire (click here for one) which I won’t do in its entirety, but there are a couple of questions I’ll pick up on such as Cruise: YES or NO?

What do you think on this? Cruising is a bit of a marmite thing – you either love them or hate the very idea. Me, I have loved cruising, but now I’m not so sure. I think there’s an image of cruising as i)glamorous and ii)relaxing. But you know what, it’s neither of those. OK, you can dress up in the evening and I love that, but in future, I’m gong to be very discriminating about which cruise line I choose and where I go, as even the dressing up is beginning to lose its attraction. And as for cruising being relaxing, think again. For a start, you’re constantly on the move with never a night in one place, and that means your bedroom is also on the move, and very much so in rough weather.  When we got back from our last cruise, I said to my other half, shall we stay somewhere where we are not surrounded by 1000+ other people, that’s quiet and with a bedroom that doesn’t rock from side to side?

Well, I’ve just got back from a week’s holiday in that lovely area of the UK – the county of Suffolk – and it was the best most relaxing holiday we’ve had in a long time!

Another question: Warm or Cold destinations?  For me, it has to be a cold (or cool) destination, and never, ever hot.  Actually, Suffolk was just the right temperature for a Brit like me with my Scottish ancestry! (I want a cool breeze please and I don’t even mind rain) It was right because Suffolk is on the east coast of England, which often has a cold wind blowing in from Siberia. Three years ago we went in September and I remember it being absolutely freezing weather. This time we had nothing but blue and cloudless skies, but the blazing sun was moderated by a lovely off-shore breeze that brought the temperature down. That’s so good as I really, really don’t do heat. And because it wasn’t boiling hot (as it was elsewhere in the UK) I wore cropped trousers (pants) a lot.

Here’s a pic of one outfit – charity shop necklace (£1) and cropped trousers (£4) with a white cotton t-shirt (£4) from Peacocks. 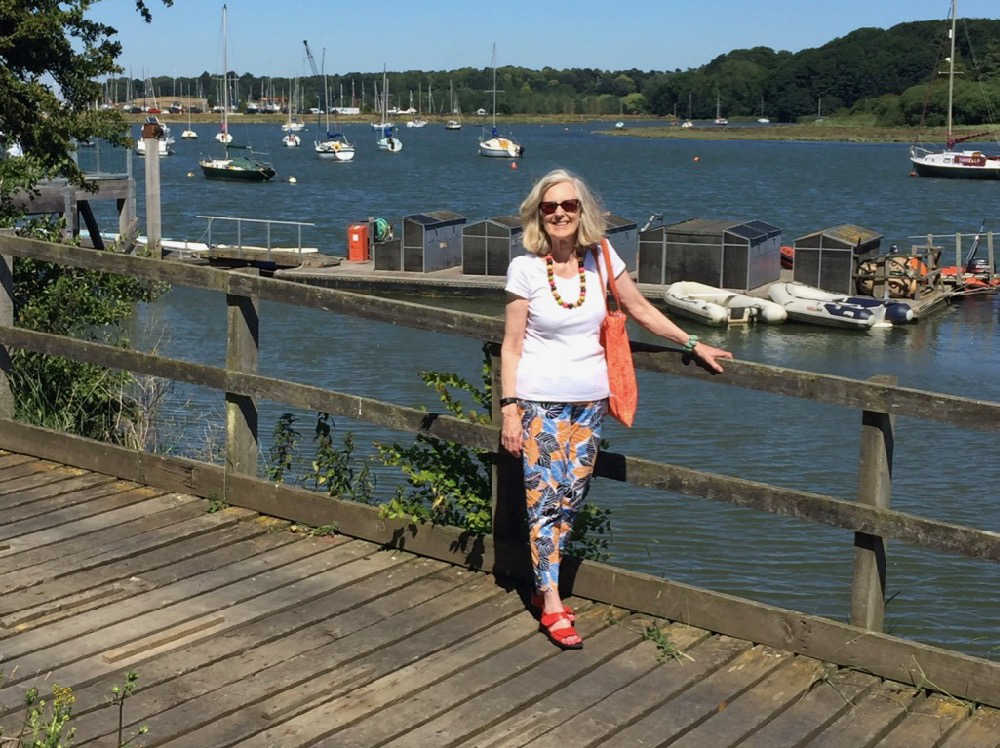 And a pic of a favourite sun hat bought 4 years ago in Tallinn Estonia. 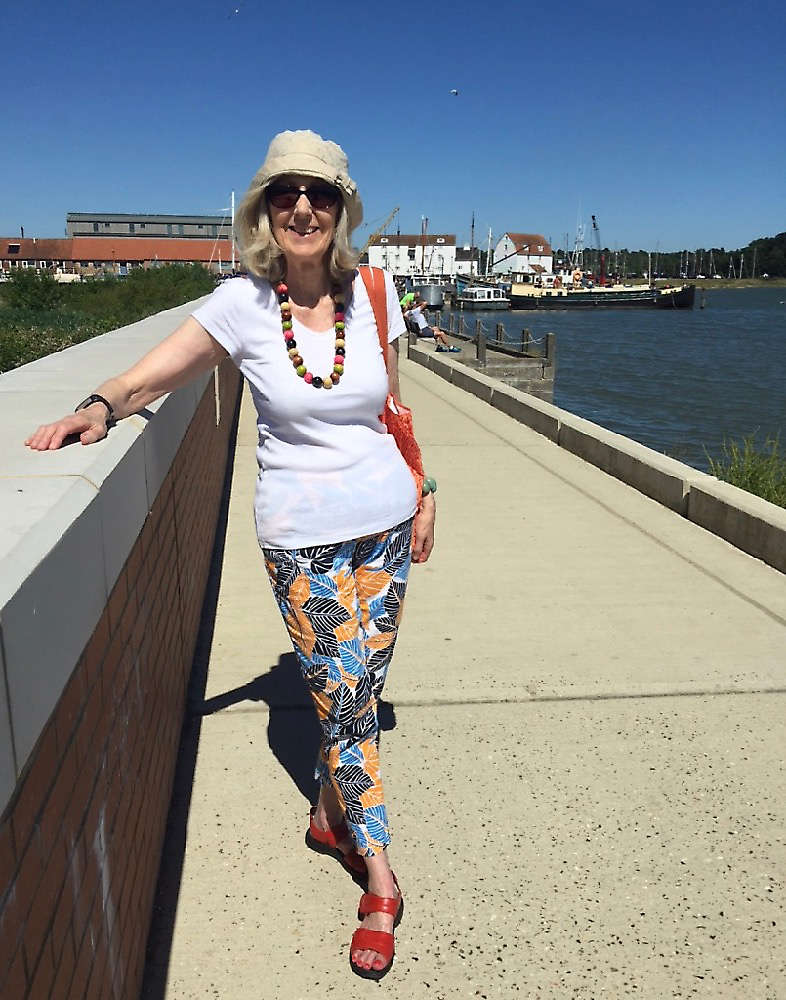 Another question was: Do nothing but relax or a pack it all in vacation? Sometimes I read comments in Visitors’ books, that recount the numerous excursions people go on, and I think that’s not a holiday! This holiday was relaxing because we went on just two excursions and spent the rest of the time mooching around our base – a cottage in Woodbridge which is a little way up from the coast on the delightful river Deben. 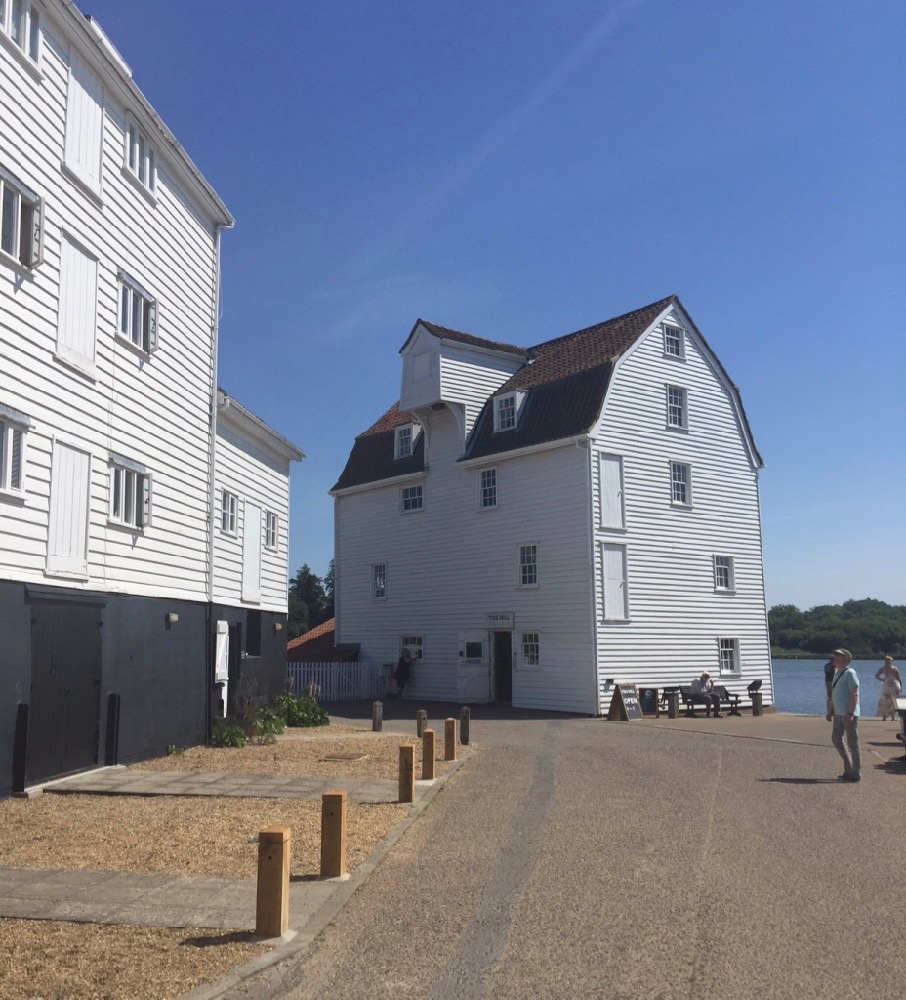 Here’s the well known Woodbridge Tide Mill with below, the mill in the distance. 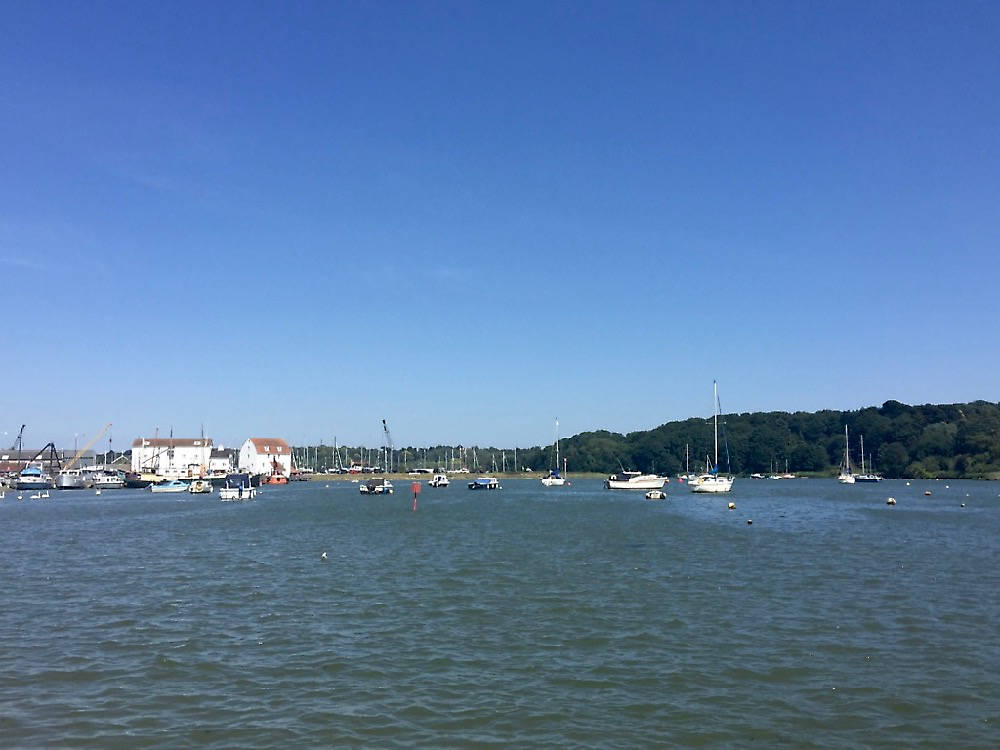 And no we weren’t staying in that house but a delightful cottage not far from the main High Street. 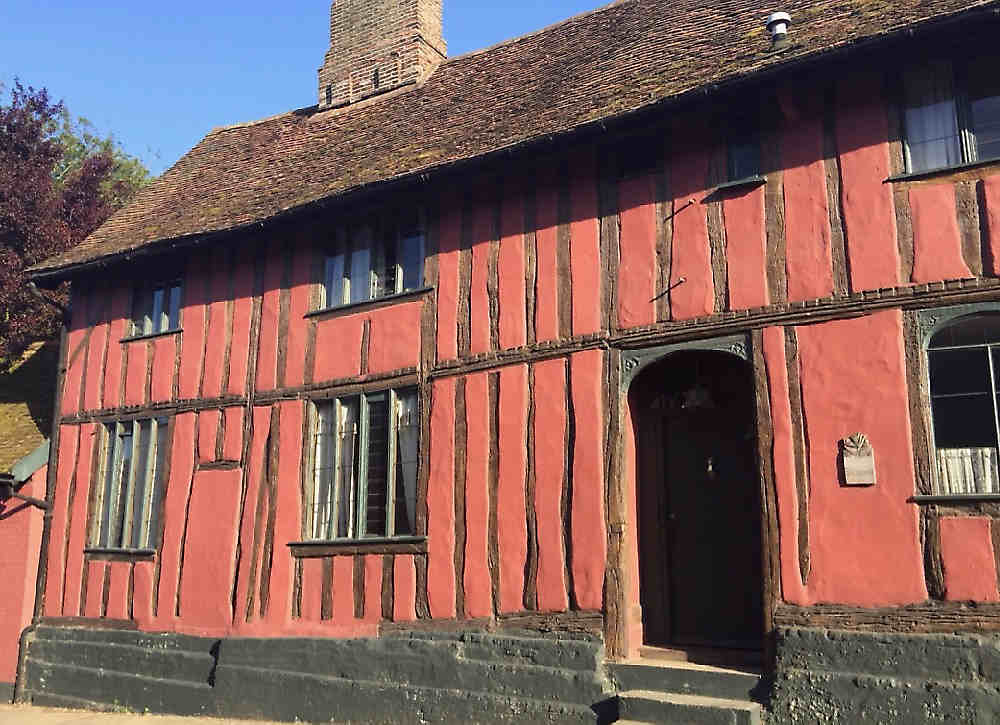 This is not the street but the houses are very similar to the one we stayed in. 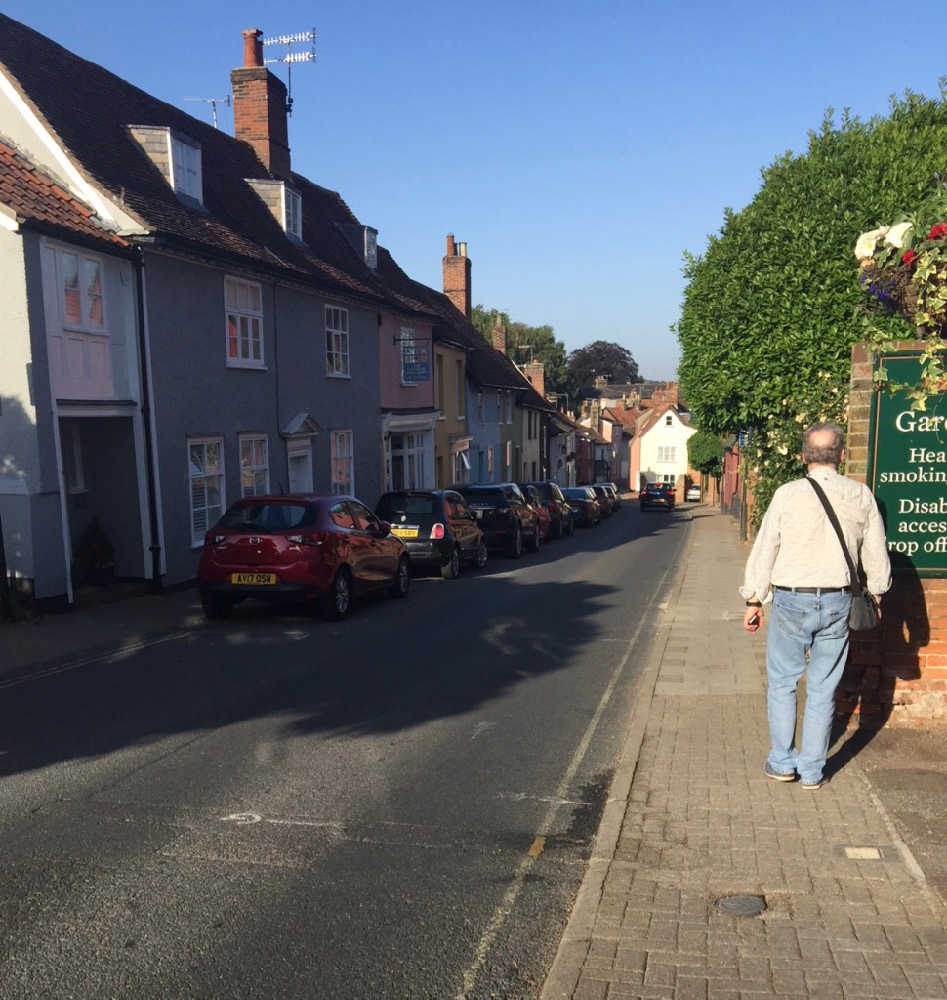 That was another question: Hotel, Condo or House?  Has to be a house, or cottage, as hotels seem to me to be the same as a cruise, with too many people and the wrong food always available at the wrong times. (I hate rich food and never late at night, urgh).  Actually I have been known to lose weight on a cruise as I can’t stand all that food being on offer.  Nothing to do with my age, btw, as I’ve always been like that!

We were very relaxed as we’ve been coming to this area for decades. My parents moved to Suffolk in 1974, the year we married. Here’s a pic of us on the beach at Felixstowe before we had children. 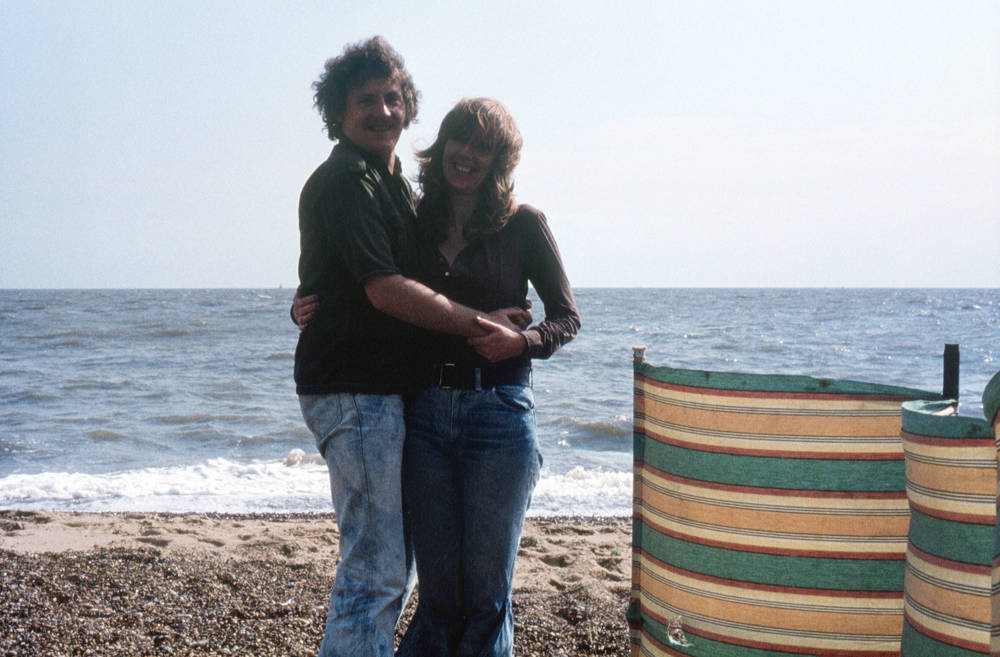 And below with my children on the beach at Aldeburgh, a place that is now gentrified to the nth degree! 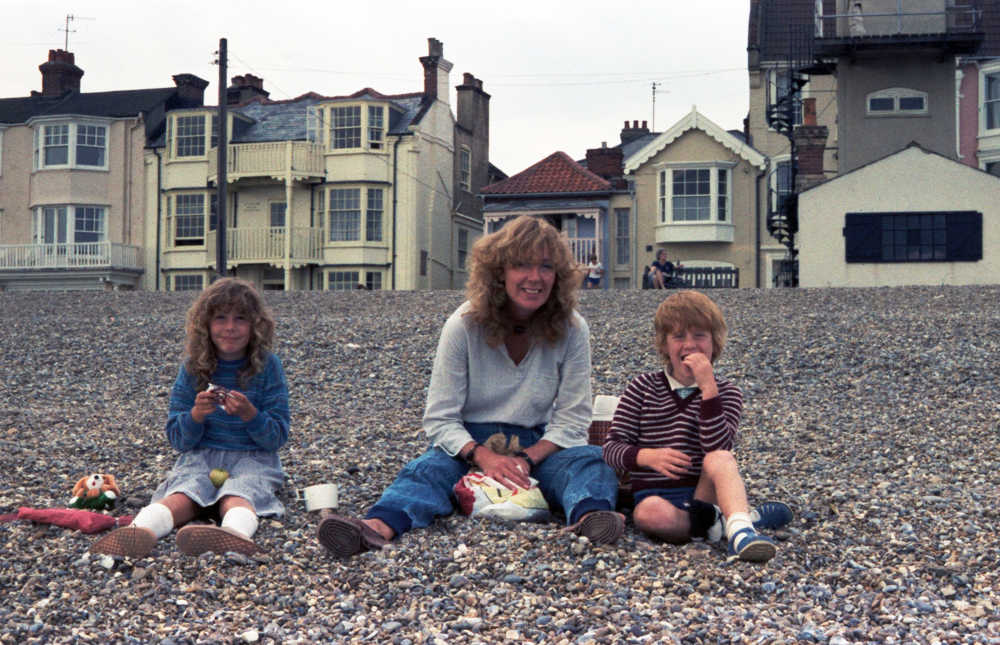 Susie’s hair is naturally curly and comes courtesy of Mr Frugalfashionshopper, and Peter has the red hair of my Scottish ancestors – still plenty there at the age of 40!

Should have bought one of those scruffy houses on the seafront as they’re all tarted up and worth a fortune now! 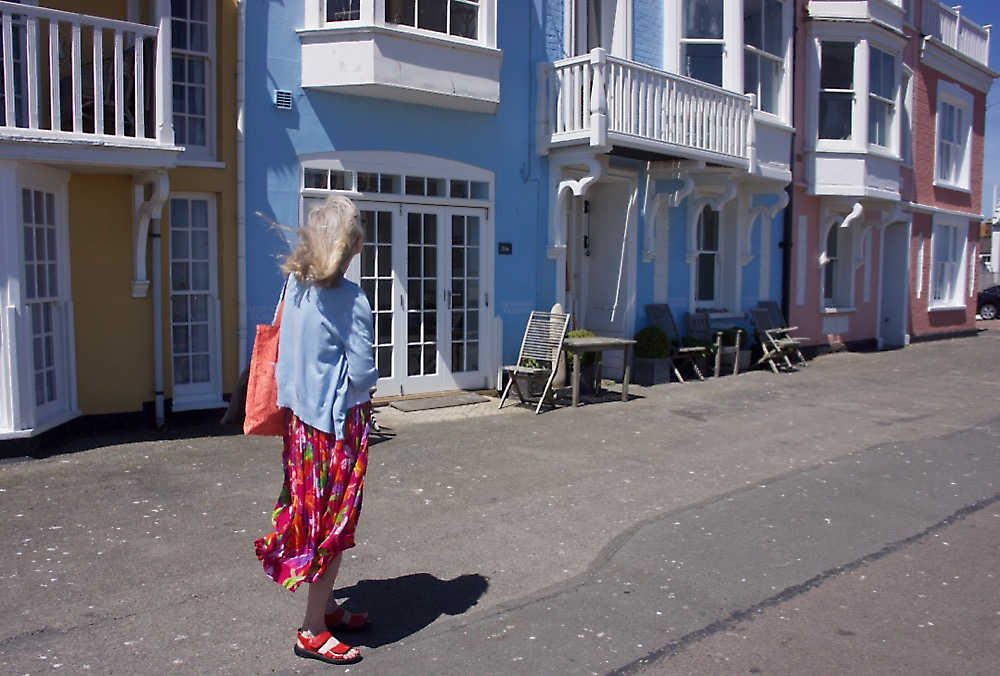 Where did those years go!  Do you think that? I don’t dwell on it really, but we did celebrate meeting each other 45 years ago in July by going out one evening for a curry.  It was such a good meal – link here to the restaurant. Our 45th wedding anniversary is next year.

And this is what I wore – a Woodbridge charity shop skirt at another £4.  Mind you in the evening that cool breeze was so cool I had to dart back to the cottage for a long top and jacket! 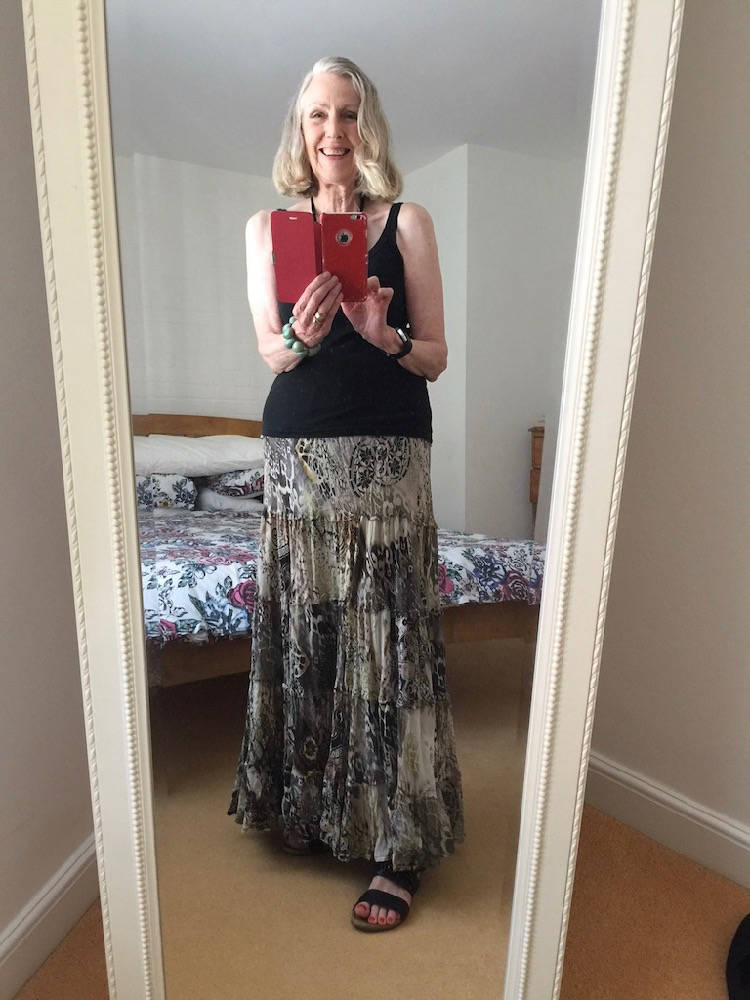 My parents lived in Felixstowe for nearly 20 years. They died in 1993 and 1996 and are buried there. I honoured them in my thoughts and left some flowers on their grave. I felt quite sad for several hours afterwards, thinking of them and regretting that they were gone – ridiculous really. Then I thought, no, they both had a good life. Don’t be sad, look forward and embrace the now, which I do. Life is for living and I do wholeheartedly believe that you go forward and grasp the day and every opportunity that there is out there.

So, it’s back to Brighton and I can tell you it’s a lot hotter than Suffolk!  So, consequently I do have some hot weather clothes to show you, although I also have a big confession to make to you all, more about that another time!

Finally we’re a very happy country at the moment, what with that football result last night (Saturday) but although even I got a bit excited about it, it’s the tennis that gets me going.  Actually it’s an amazing weekend for sport: tennis, football, the start of 17 days of the Tour de France on Saturday and the British Grand Prix on Sunday, all watched on the telly in my very cool flat. We don’t have air con in the UK but my flat doesn’t get the sun, which a lot of people think is so bad.  I’m the opposite I relish the fact that we don’t get the sun, especially in this heat, which is actually not very hot if you’re in the States or Australia, but you’ll just have to bear with us as it is unusual weather for the UK. But are you watching Wimbledon?  It’s great.  And you know who gets my full attention?  Rafael Nadal, because, yes, his tennis, but wow, those muscles, they’re rather exceptional! I have more to say about building muscle in a future blog.

That’s all for now, although do tell me your feelings about cruises, and the merits of relaxing as opposed to seeing as many sights as possible.

Judith of Style Crone for #hatattack

Nancy of Nancy’s Fashion Style and Fancy Friday link up

Patti of Not Dead Yet Style for Visible Monday

Links as above, or on icons featured on the sidebar or at the end if reading on a phone 🙂

44 thoughts on “Holidays and vacations – what do you like to do?”