How are you all?  Tired but happy, OK, or a bit down from all the news of ‘you know what’? Well, apparently, we should be happy that this variant is less serious, and that’s good, and yes we should feel encouraged, yet I think that won’t be the sentiment amongst ambulance staff and those front-line workers in our A&E departments and those over-crowded Covid wards. May I say to anybody who works on the front-line a huge thank you, and that comes from the bottom of my heart. We cannot thank you enough. May Christmas give you some joy and peace and here’s to a slightly better 2022!

Not saying any more about our great leader as the papers and social media are saying it all, well, the social media I’m in touch with is! Apparently he’s on his way out. Really? I’ve heard that before! Instead, this blog is a short end-of-the-month review with some film and television reviews as the last December post will be a review of the year – mostly of charity shop fashion, you’ll be glad to know!

Anyway, how are you preparing for Christmas on the fashion front?  As you know I have 3 opportunities to dress up, and here’s where I give a big thunderous round of applause to those of you who dress up every day – yay!

This was my look for a Sunday lunch with our dear friends who live in Newhaven. 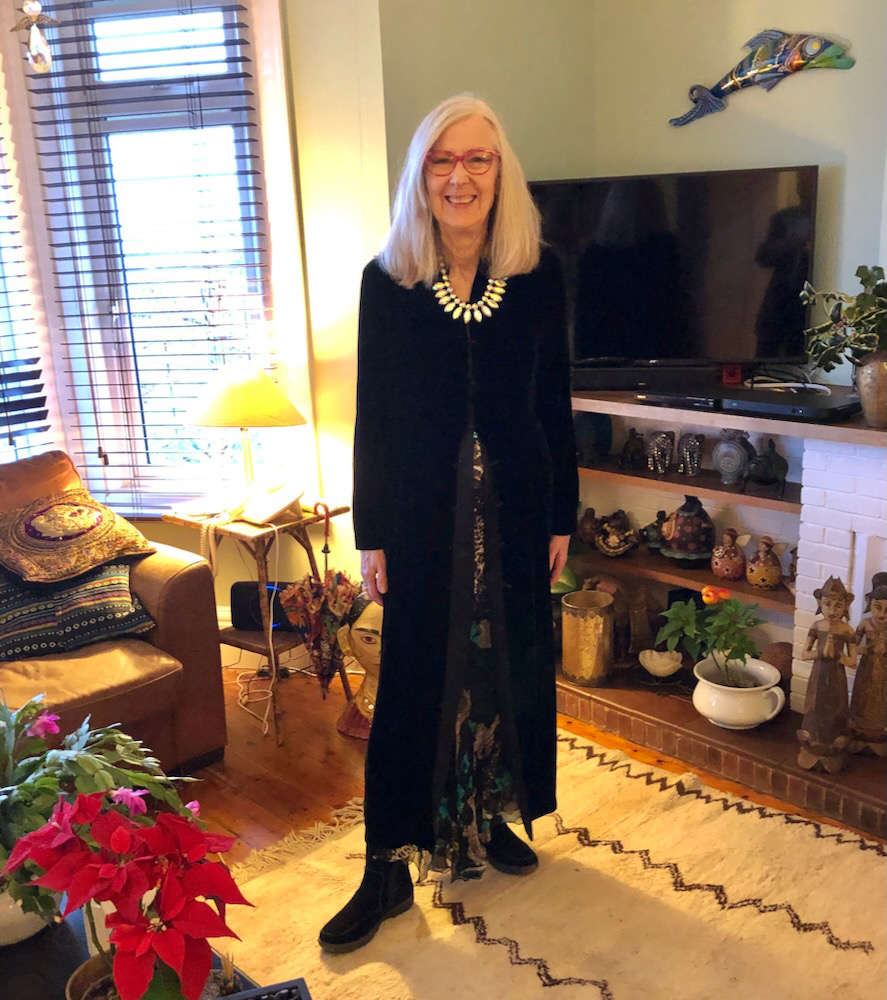 It’s a bit black, that long velvet coat, but I needed it, as in the UK you can’t wear something with no sleeves to speak of in the winter!  But see, under the coat, that is the most glamorous dress I possess. I believe we simply have to get those dresses out of our closets and wear them! The dress, btw, was bought in a charity shop, the coat was a gift. Thank you Diana!

Look at that cosy fire. 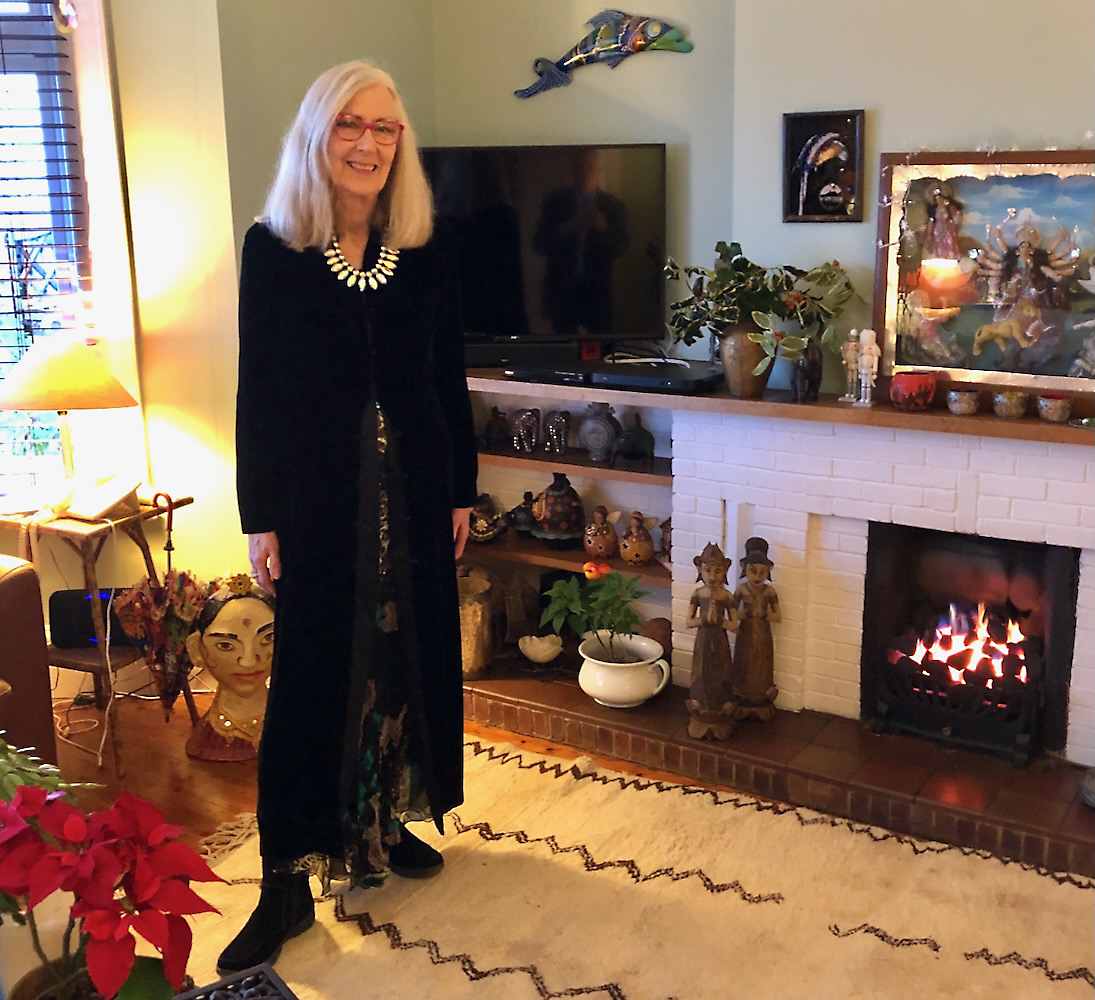 I now include a photo of Mr F. 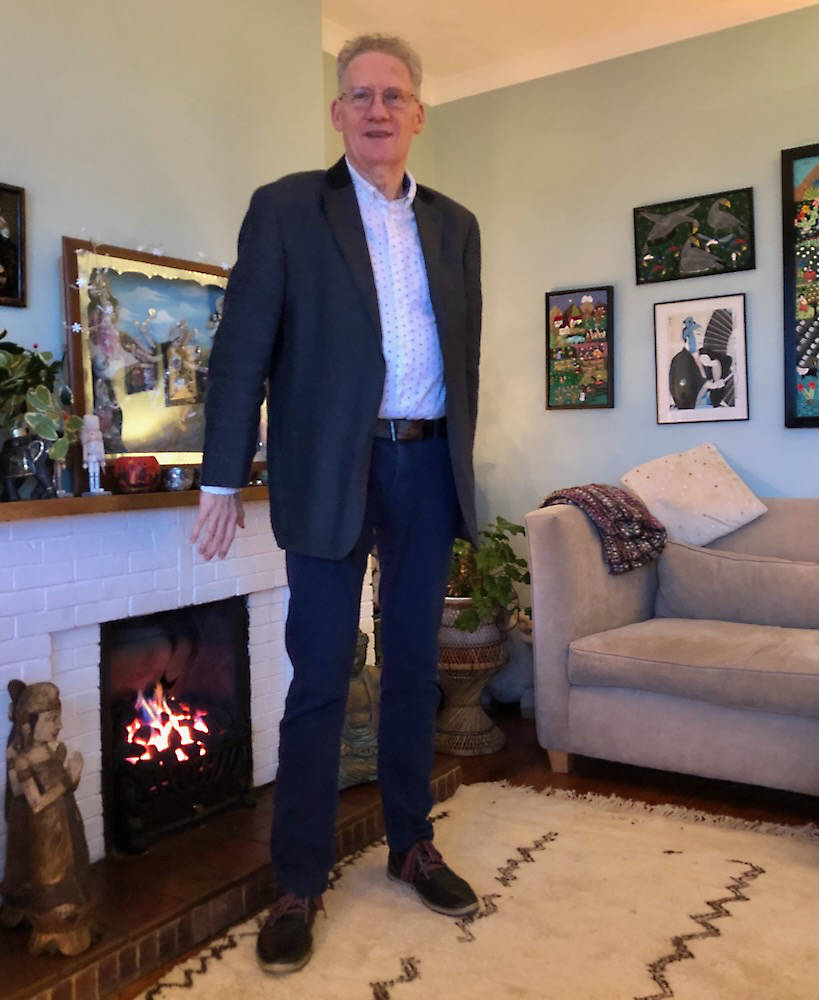 If you think he’s looking remarkably slim, you’d be right as a few months ago his blood sugars went up into the Diabetic Type-2 range, so he put himself on a strict diet and has lost 5 kilos. The diet by the way, is simple, no sugars or as much as you can eliminate as possible, but he is not restricting fats. Also it’s portion size, which we’ve both reduced, plus no snacks whatsoever, and very little alcohol as well. There have been no mince pies in this household and we don’t miss them at all! Furthermore, I have a small Christmas cake bought from a well-known store, which was to be all for myself. But I ate one slice and that was enough, felt almost nauseated, there was far too much sugar in it. It was appallingly sweet so it will be given away. 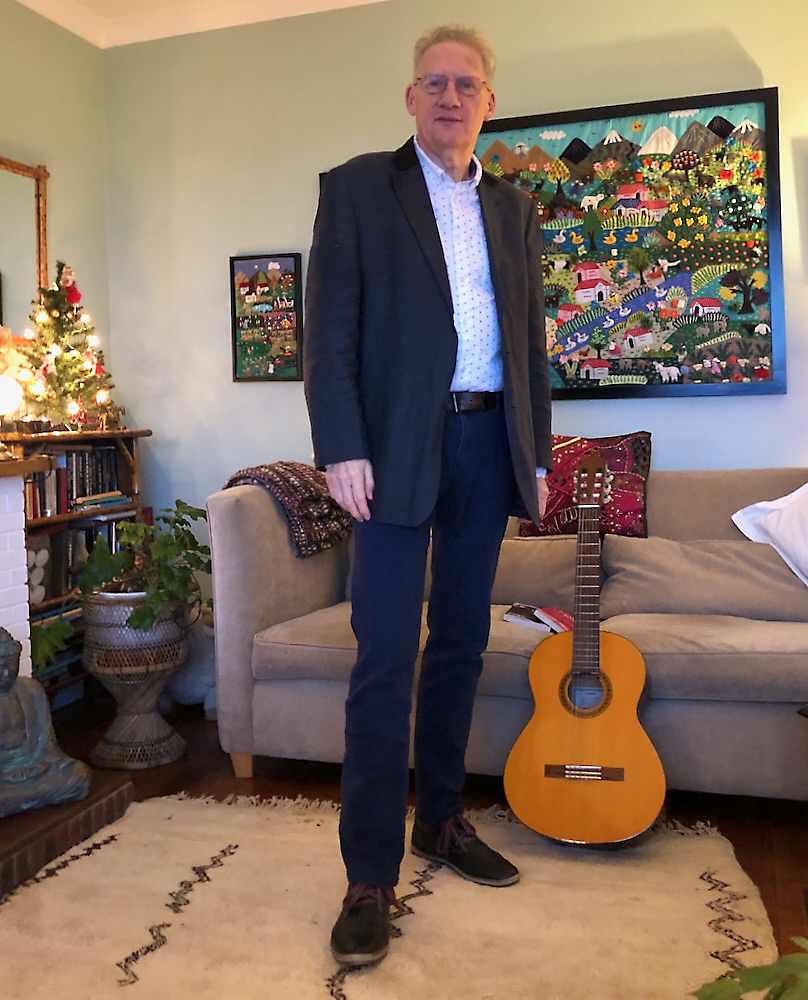 Any way, well done, partner! And what’s more I think he’s looking good on it, plus his blood sugars are down to a low pre-Diabetic level, with more to lower as he’s continuing to be careful to get the bloods to below that crucial point. His linen jacket, btw, is a charity shop buy.

I’ve been disappointed with the second series of The Morning Show (Apple tv) although it’s been better in the latter part of the series, only two more episodes to go. Won’t miss it all that much as it’s a bit glossy and empty and yet very talky, which can be irritating. Finished Invasion (Apple tv) – it is what it is, about an invasive alien species and it sort of worked. As for Foundation (Apple tv) I find it incomprehensible, but I’m watching it as Mr F likes it. I’m not even minded to re-read the Foundation books and that is such a contrast to the wonderful Dune, the film that is, that came out in the Autumn, and is so very very good, so good that I couldn’t wait to read the book, which I loved.

And something wonderful has happened as we’ve found a replacement for Schitts Creek (Netflix) which touched my heart so, it’s Ted Lasso (Apple tv). In this series there is no need to say you might need a couple of episodes to warm to the characters (true with Schitts Creek) because Ted Lasso is heart-warming from the start. When I described it as a bouncy, over-positive American coming to coach and manage a British football team to our friends they were almost put off it and said, no to both the idea of anything to do with footie or an American coming over, you get the drift, but it’s actually a ‘fish-out-of-water’ story and lovely with it. Love some of his encounters with British stuff including tea!  A real must-watch!

Anyway so far we’ve only watched three films but see below for my Christmas list. The first was just plain silly, but quite good at the same time, Free Guy (Amazon) with Ryan Reynolds and Jodie Comer. It’s about a guy (yes) who thinks he’s real but he’s actually the first sentient player living in an online game (I said it’s silly) but it was fun and passed the time. Also within the film there were many references to other films and having seen them all we quite liked recognising them. Three* from me.

The best film of the year for me was The Power of the Dog (Netflix).And I mean that, it really is good. First of all, it’s a Jane Campion film, need I say more?  And it is the best thing that Benedict Cumberbatch has ever done, imho. It’s set in mid-America in the 1920’s, and what is it all about you wonder? Is it a cowboy, as it’s set on a ranch, no, is it…? Ah ha, and the tension builds as two brothers (Cumberbatch and Jesse Plemons) are parted from their years of routine with the Plemons character marrying a woman (Kirsten Dunst) who comes to the ranch as the lady of the house. But the Cumberbatch character resents this, and oh wait a minute there’s the beautiful son belonging to the Dunst character.  And then there is this subtle psychological duel and the film does not turn out as you might expect. I don’t want to say any more as it’s a must-watch and the less you know the better. I thought about it for days afterwards so the film gets a 5*****+ from me.

Last night we watched Cruella (Amazon) which is an origin story of Cruella DeVille.  It’s a fun, well crafted watch which you would expect when it stars Emma Stone and Emma Thompson. And there are some lovely clothes in it! Four* for this film.

I’ve a list of films to watch over Christmas, because we don’t watch live television, and having looked at what’s on over Christmas on BBC1 and all the other channels I think we have the right idea!

So on Christmas Day we will watch:

Thereafter I aim to choose from the following:

Passing(Netflix), Little Women(Amazon), The Farewell(Netflix), French Toast,(Netflix) Encounter(Amazon), Venom2 (Amazon and yes, I know I have awful taste) and finally we really must watch The Joker(Amazon) Anyone else seen the last film? We didn’t watch it when it came out as I don’t like depressing films – should we watch it?  We keep hearing it’s good.

Anyway, that’s all for now, do have a lovely Christmas and enjoy it as best as you can in the circumstances. I know I will.

17 thoughts on “Here’s wishing you a very Merry Christmas!”