How are you all?  Well I hope!  Here in  the UK we’ve got some sun and warmth at last so that does really lift the spirits and warms the joints! Yes, I need that warmth on the body as I’ve got arthritis in my right hip, which is now impacting my walking, but that impact is held at bay with exercises to strengthen my glutes and core, and through doing them every day, yes, every day, I have stopped (mostly) that unstable feeling I had when my hip gave way several times a day – got that down to once a week – huzzah!

And that’s relevant to today’s post as I want to talk to you about some great books on health and wellbeing that we’ve acquired recently. The first are five books about diabetic cooking. Yes, Mr F had some bloods taken last week (which was a bit of an achievement in the UK but I won’t go down that rabbit-hole!) and one of his results found that his blood sugars have tipped over into Diabetes Type-2. Ooops! I mean both of us think we eat healthily and we mostly do, our main meals are very healthy always with loads of vegetables, but there are things we do eat that are full of sugar, like jams and marmalades on bread, yum, biscuits, and me, I do like cake!  Mr F. loves his ice-cream and custard on a pudding, oh and the occasional beer. Neither of us drink very much, me not at all.

He’s seeing the GP next week, but in the meantime I ordered a bundle of 5 books of which one was: Dr Michael Moseley’s the 8-week blood sugar diet and, you know what, we realised that we’d read it before and discarded it when we were moving (we move a lot!). That previous book we think we got when Mr F’s blood sugars had started moving up, but did we truly take note of everything Moseley said, no we did not. Did we act on what he said, no, we did not. But now, it’s different and Mr F is reading every page. What’s more he has truly taken on board portion control and actually ate less than me last night, which is saying something as I always have quite a small plate and hardly ever have second helpings. The healthy minestrone I’d made was far too much to eat in one meal, so half of it has gone in the freezer, while before it would have been eaten come what may. Anyway, Moseley’s book is excellent with lots of interesting information giving lots of context and background to diabetes followed by some great recipes. The same goes for another of the 5 books which is, Antony Worral Thompson’s the diabetes Weight Loss Diet. That too has a lot of information on diabetes (about one third of the book) plus there are some sumptuous recipes so I am dipping into Worral Thompson’s book while Mr F is reading Moseley’s book.

The other three books are just recipe books and they are: Quick Cooking for Diabetes by Louise Blair & Norma McGough; Diabetic Cooking for One and Two by Michelle Berriedale-Johnson; and Diabetes Type 2 Healing Code, but we shall be looking at them all and this time, acting on them.

And that’s the point I’m making, there are some brilliant books out there and I have bought a few! I can turn my head to the left and see on my shelves numerous books on ageing and health, and two in particular, Dynamic Ageing by Katy Bowman and Strong Bones for Life produced by the Osteoporosis Society I bought ages ago when I was first diagnosed with osteopenia.  Both are full of exercises, but did I do them, no, I did not (of course I always do my Pilates classes and the 1-2-1 with my PT and I do have weights).  But it’s only when I wondered how long I would be able to walk that I faithfully began twice daily exercises, and actually, I’ve also moved my weights from a cupboard to those very shelves in my office and I am now doing upper body weights every day alongside the lower body strengthening that I have to do.

Perhaps you have been more motived than me, but what I’m saying is there are some great books out there to take up and read, but is it a fact that those books don’t get acted upon until that is, it becomes truly relevant?  I am certainly guilty of that, but I wonder what you think?  Is it that I love buying those books because they look good on my shelf?  Is it that I really do want to be healthy so I read all about certain issues so I have more knowledge, but in reality cook the same large portion meals and don’t do daily exercises because, you know, I’m a bit busy and quite well actually?  And then something hits on you – like my hip, like Mr F’s blood sugar?  And then….you act!

Here’s another book that I don’t need at the moment (thank goodness, but you never know) it is the Chemo Cookery Club, Cups & Sauces, Breast Cancer Edition by Penny Ericson & Barbara Park MSc RD. It’s sumptuous book and here can I say that I was given this book for free by a fellow Pilates class mate, the very same Penny Ericson, and it was my idea to review it, not hers and she’s had no input into these following paragraphs either 🙂

It’s actually a gorgeous book and highly relevant to anyone with breast cancer, or a carer, or a relative of someone with breast cancer as it’s got so much in it. Consequently it’s actually quite a weighty book in so many ways, because it has good information on cancer and food and eating well with just the most fabulous recipes. Penny has written six cookery books of which this is one and the recipes are mouthwatering, in addition there is a note of how easy or difficult a recipe is to cook plus a breakdown of the nutritional values, which I think is a really good idea for people who are obviously poorly. The bonus in this book, and what makes it rather special, is that it has a large section on moving with exercises provided by my very own Pilates teacher, Sarah Gibbings, and even some great advice on hair, scalp, skin and nail health. You really couldn’t ask for more, it’s very comprehensive. I loved dipping into it and think it would be a superb reference book for anyone suffering from breast cancer, and I say this because the whole approach of the book, and of the writers and contributors, is so helpful that it is, indeed, uplifting to read. I therefore highly recommend it

Now, unlike the other books where I haven’t given links to getting them because as you know all books can be bought from either your local bookshops or websites like Amazon, this book can also be found on the website: chemocookeryclub.com

There is another book translated into Italian, German, French and Russian called Around the Kitchen Table that can be downloaded free from the website: aroundthekitchentable.org

And finally it is so important these days to get out, be active and have some fun in the sun. On Sunday we had some fun, in some actual hot weather! We found a wonderful garden on the outskirts of Brighton in Stanmer Park called One Garden. I hadn’t been to this park for decades, not since we had a dog and I used to walk her in the woods surrounding the lovely Stanmer House, which is a Grade 1 listed building built in 1772 in the Palladian style. Here’s a photograph that doesn’t do it justice. 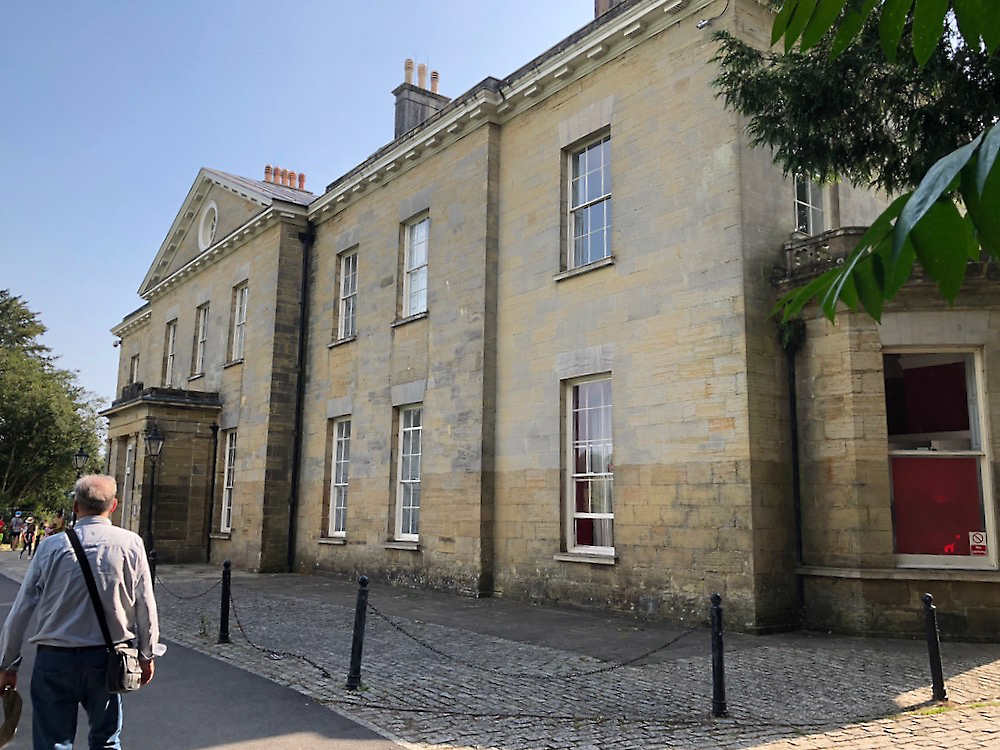 Facing the house are sloping fields that are typical of the English countryside. 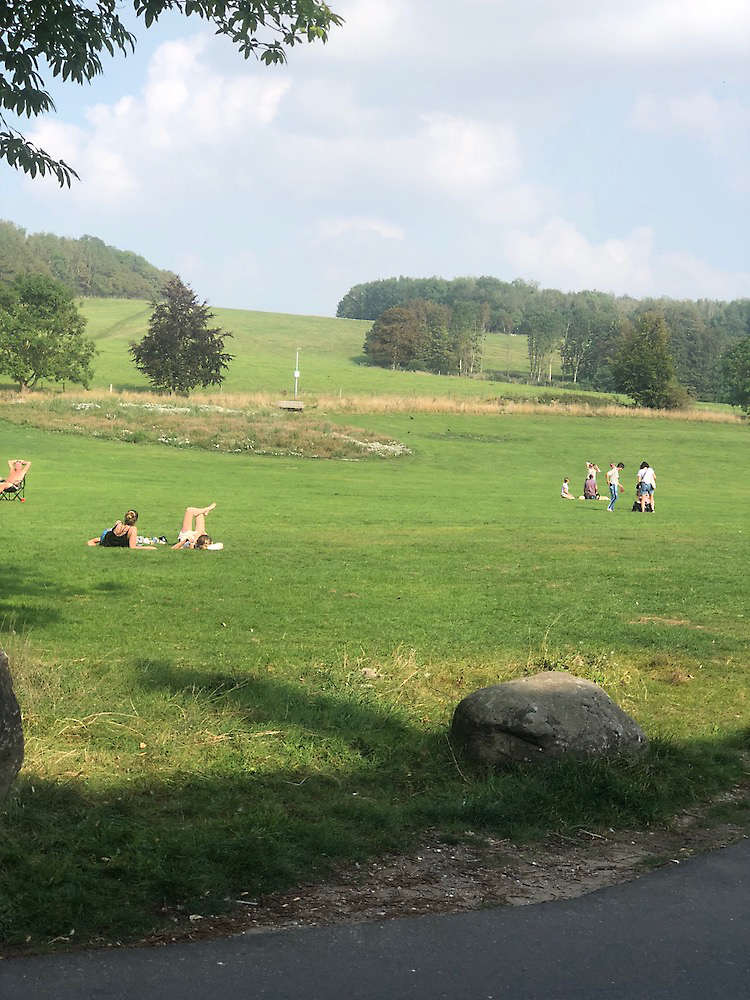 Stanmer House has had quite a rocky few years with many commercial  enterprises failing but I believe there are some plans for the house to have 10 apartments built on the second and third floors and in a new annexe. Well, whatever happens it’s important that the building is maintained and it doesn’t fall into disrepair or worse.

We used to walk in the grounds of the house all the time when we had our dog, and I seem to remember a rather sad looking orangery. Today, though, round the back of the house a local college has restored the Walled Garden and within it is the most lovely garden, cafe and marketplace, of which they are called respectively, One Garden, One Kitchen and One Market.

The garden is laid out rather like Monet’s garden with rows of beds and is lovely. 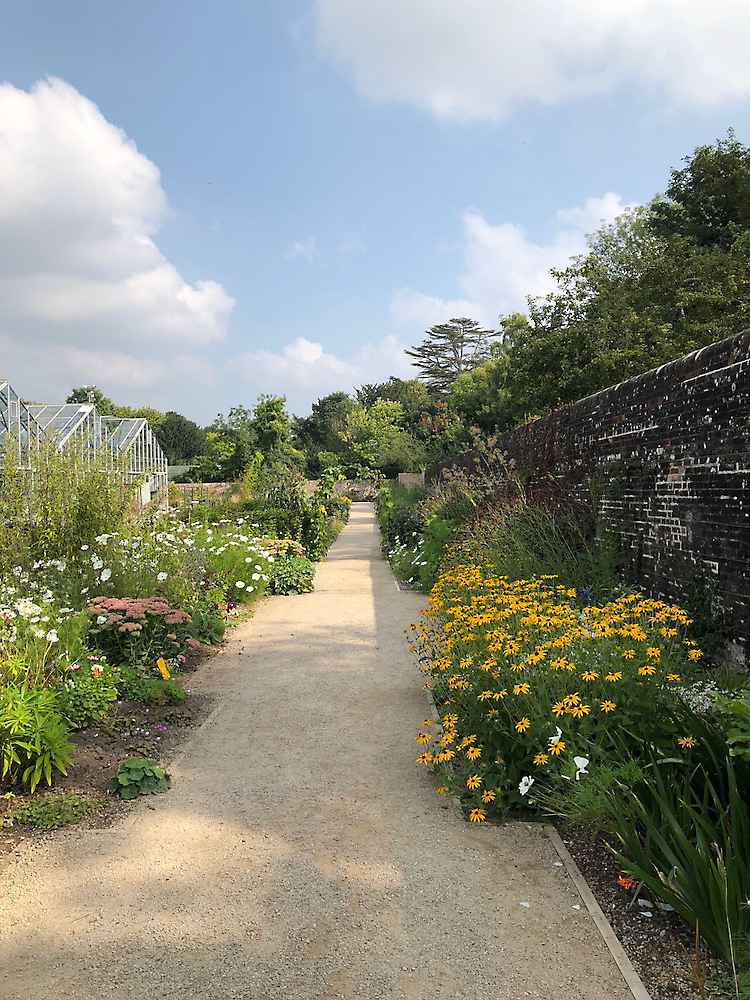 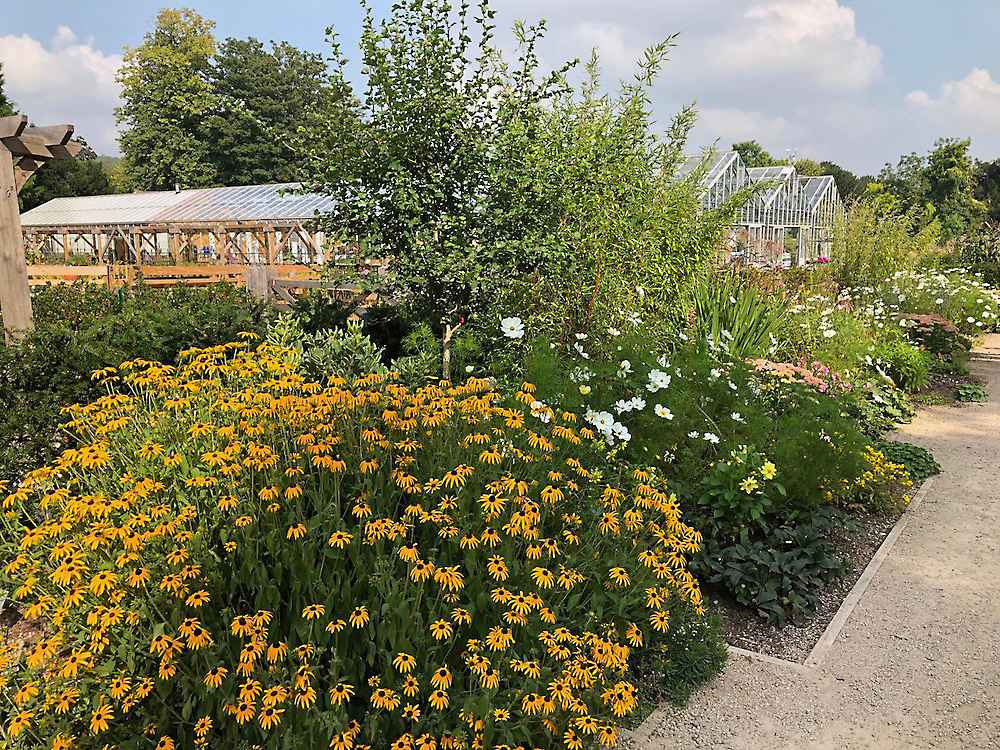 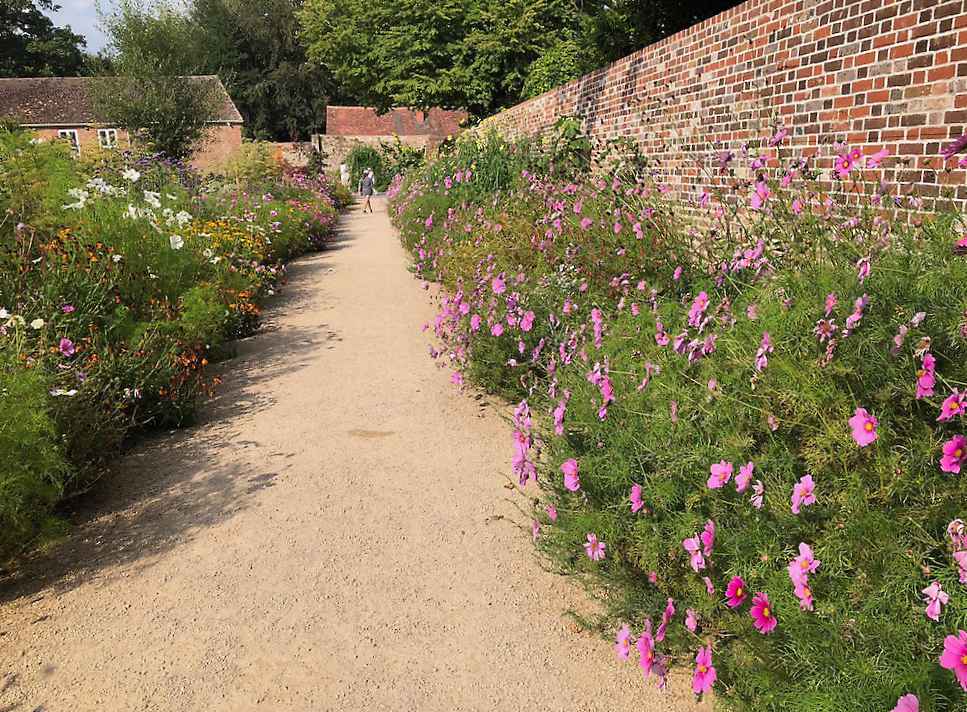 The sweet peas were gorgeous. 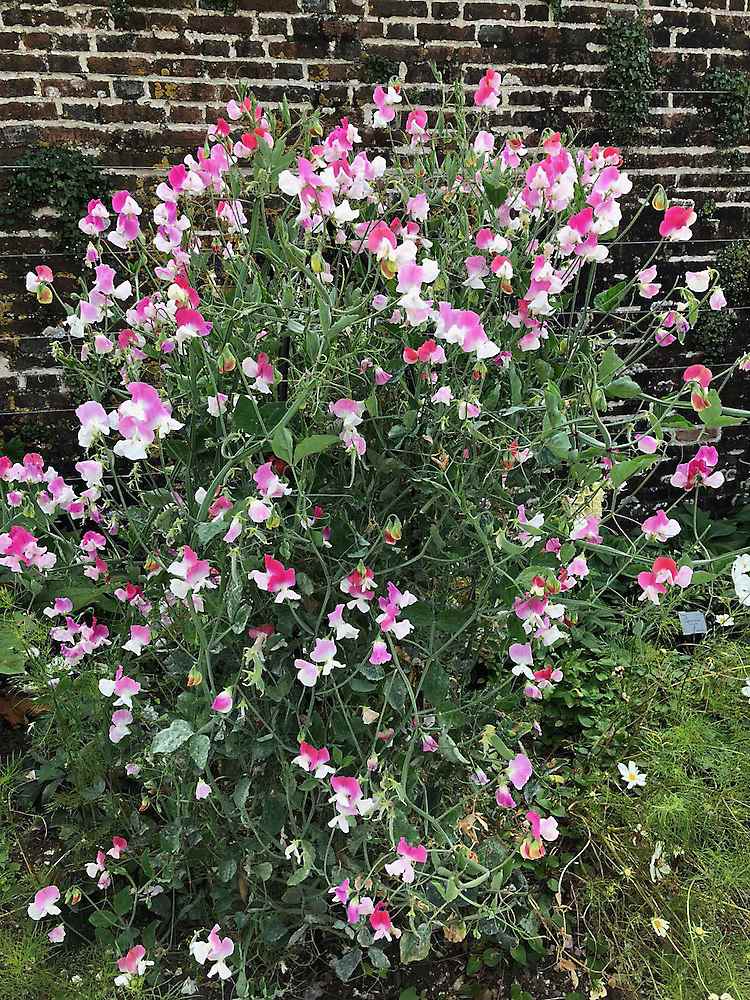 As you can see I was rather taken by the yellow flowers. 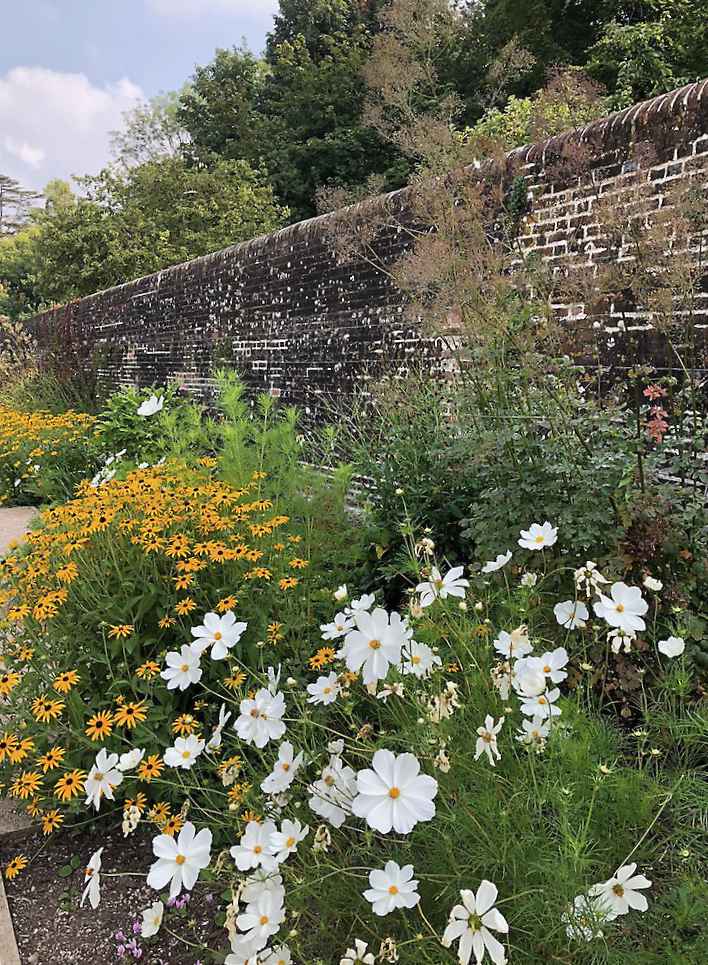 But here’s an amazing blue geranium. 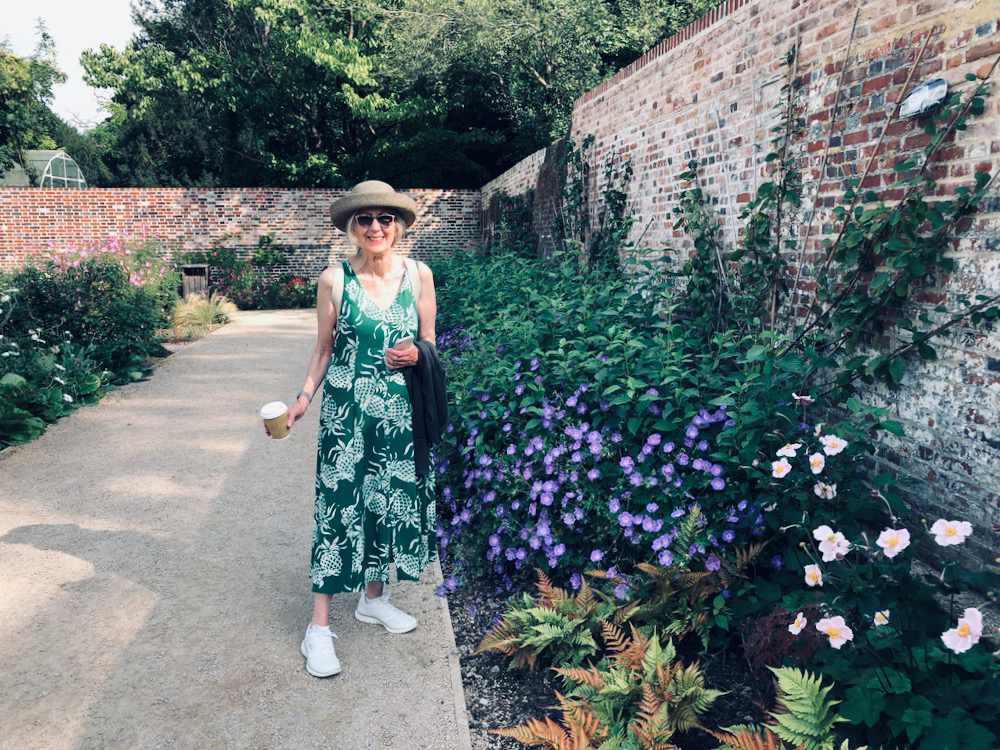 I’m standing rather awkwardly holding a polystyrene cup of tea which was so boiling hot when I bought it, I had to carry it around waiting for it to cool down.  But I was glad I hadn’t discarded it as, boy, was it a hot day. Have you ever seen me with so little on?! It was a delight to get out this summer dress which I’ve had for some years. To think a week ago I nearly packed away all my summer clothes! I didn’t, but that was a cold week – what a contrast this week is.  However, for those of you living outside the UK this weather breaks on Thursday and it’ll be back to normal. So there you are, we’ve had one week of summer in June, one week in July, no warm weather in August and the best and hottest weather in September – for 5 days!

Thats all for now, with love, Penny, the Frugalfashionshopper

31 thoughts on “Health & Wellbeing – reading things up and actually doing the things that are suggested!”