Apologies for not posting earlier but I’ve got the cold that’s currently going around the UK and am firing on one cylinder rather than, is it four?  My brain is so befuddled, I can’t think of the right number!

Anyway, I was going to do a post on all the lovely dresses I’ve managed to find that will be worn either during the party season or for a cruise (one is coming up at the end of March), and to tell people to be kind to themselves during the run-up to Christmas and not do too much (although my good friend Tricia of LookFabulousForever fame has written about exactly that). But I’m not fit enough for photos, what with my streaming nose, so instead I’m going to tell you a story.

However, before I start on this tale, I just want to say how good all of you are to read the blog and follow me.  I am so grateful and also totally delighted as a week ago this year’s total hit 100,000 views!  Oh, wow!  Thank you!  I’m now into my 5th year of writing this blog and have every hope that I’ll continue for many years more.  I may develop the blog who knows where, or how, because it is important to not do the same old thing over and over, but I will never take you for granted and remain humbled that people are actually reading me.  Above all, you need to know, I do love writing for you all.

OK, this is the tale of a ‘find’ that went bad, that turned into me finding my bargain of the year!

Do you remember that a few weeks back I bought a long mac that I felt really did the business and kept the rain off?  Actually, when I bought it, the rain was a mere mizzle. You know, the soft sort of rain that gets you quite wet, but isn’t in any way a downpour. Here it is.

Last Thursday rain was forecast so I wore it into town.  At first the rain was the same soft pitter patter of drops – so far, so good.  But then the heavens opened and the rain poured down in sheets.  Everybody got soaked, but unlike everyone else whose macs and/or coat seemed to be coping, my mac failed utterly.  It could keep out mizzle but not that bucketing down rain.  In a shop window, I caught a glimpse of myself.  Oh lord, the mac (or was it me) looked like a bedraggled piebald pony.  It looked appalling.  Right, I said, I’m not going to walk around any more in this pitiful rag.  I’ll get something else. To cut a long story short I found myself in TK Maxx.  And, btw, by then I’d taken off that mac and was kicking it round the floor as I tried stuff on.  As far as I was concerned the mac was destined for the bin!

Gosh I did try on some right old tat.  And I was beginning to despair when, round a corner and almost hidden, I found a rack of reduced designer coats.  There was a Vivienne Westwood reduced to £300, and other designer coats around £100, all of which I tried on.  And then I tried this. 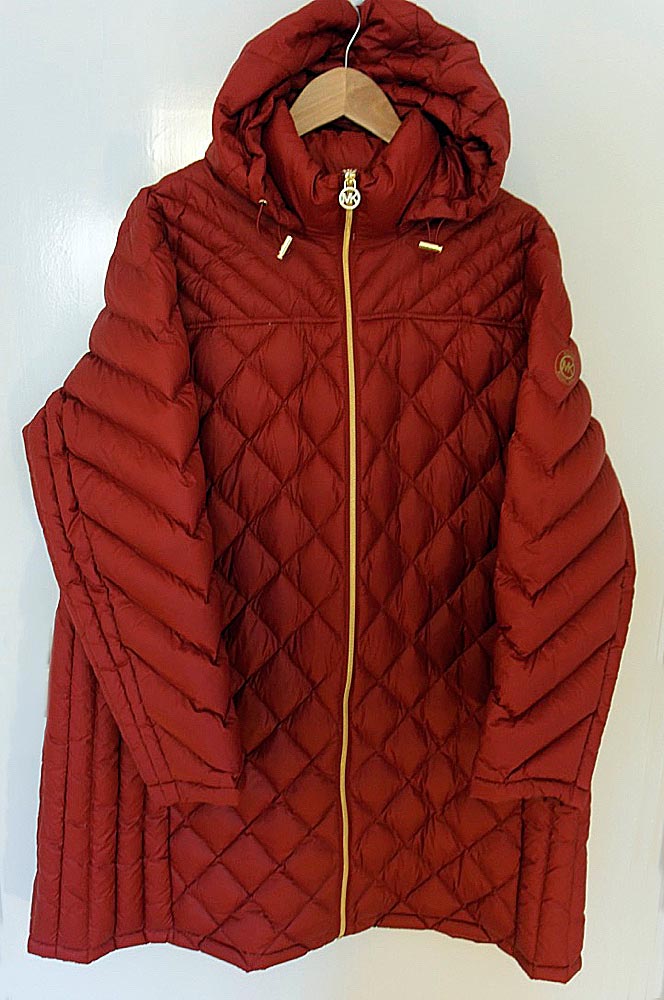 Can you see the logo? 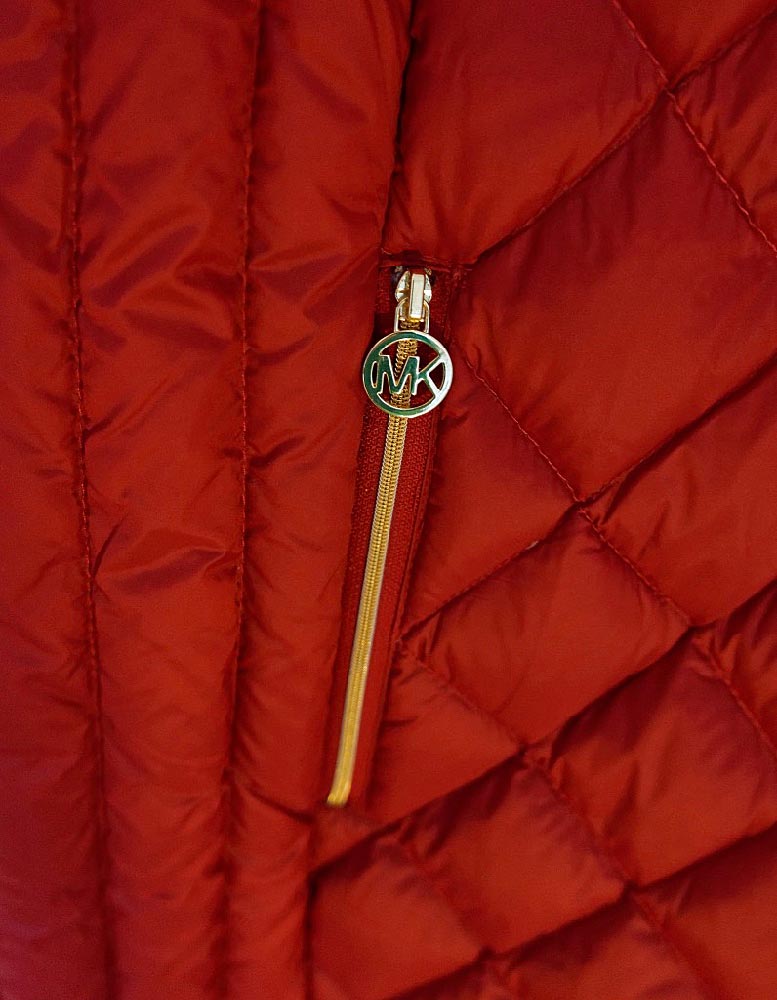 Yes, that’s right!  It’s a Michael Kors coat. It’s filled with down and also totally waterproof as I tested that out hanging around waiting for the bus. It’s also so light it fits into this dinky bag. 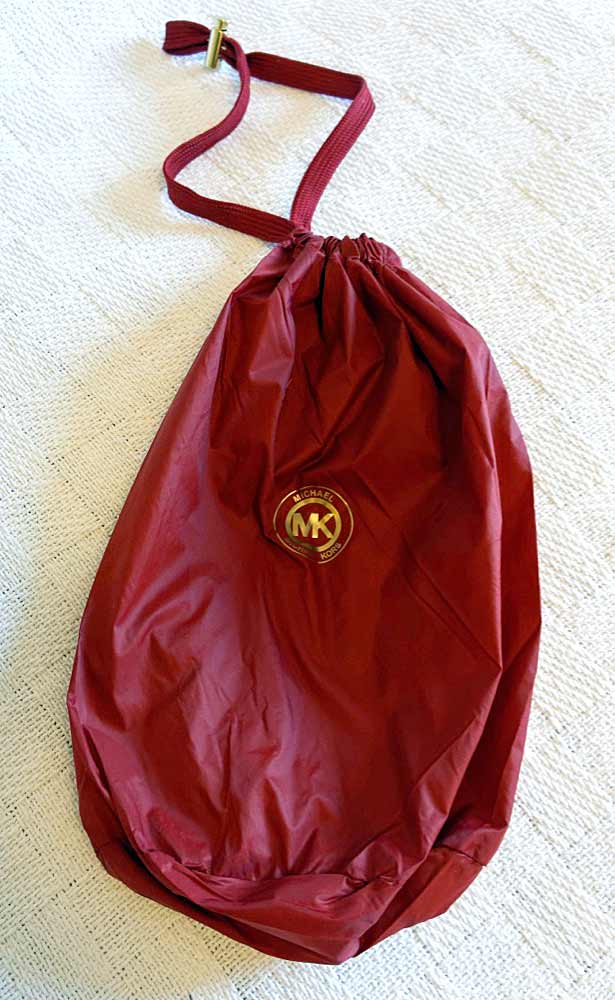 It’s altogether a very practical coat: warm, light and good for all the rainy wintery days we get here in the UK, plus it’s colourful and cheery.  It did cost me, though.  It was £45.  But just add a nought for how much a Michael Kors coat would normally cost bought online or in any store other than a sale rack in TK Maxx.  That was a bargain!

As I paid the cashier I handed over the old mac (now looking a little like a crumpled dish-cloth) and said, could you put this in the bin, please.  Never was I so glad to see the back of a piece of clothing!

Anyway here, for you, is a taster of my next blog post, which will be on frocks for this seasons’ parties.

This wonderful dress was bought in Bexhill (for £15) where there are numerous charity shops.  Just look at the detail. 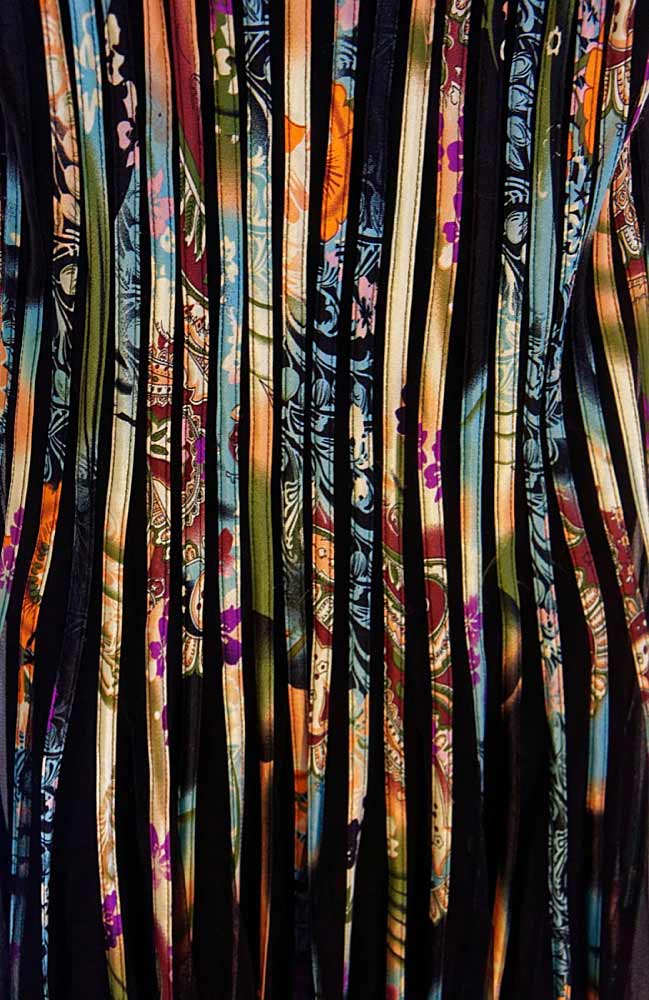 That’s all for now, you lovely people.

30 thoughts on “Have I got news for you! All about the blog and my shopping bargain of the year!”