This is all about the weather we’ve had in the UK, which apparently is going to change for the better the latter part of this week and the next, which is why I’m posting this now as the clothes here will seem all wrong if posted next week.  Gosh, to be warm!  That will be such a change as it’s been mostly cold and wet through April apart from 3 days of hot weather when I went bare-legged and wore sandals. We all thought summer had come and to celebrate that I put away many of my cold weather boots, shoes and skirts only to get them out rapidly a few days later.

So this is also about the hat I’ve worn a few times in April. Yes, it’s a rain hat, which I’ll be linking up with the wonderful Judith Boyd of Style Crone for her monthly hat share. 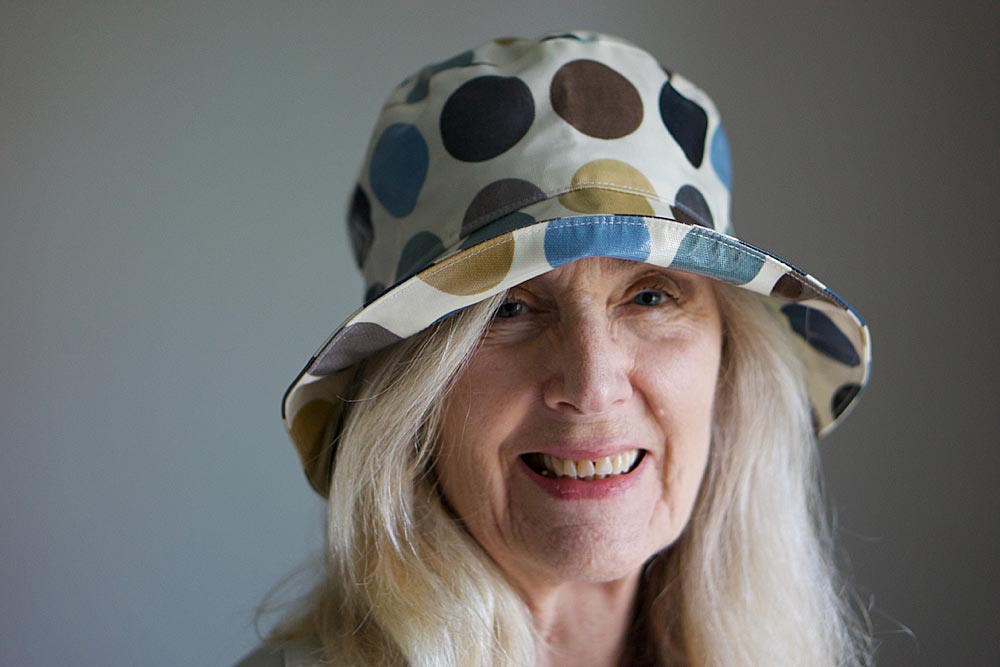 Actually, it’s been so cold I wore it with my black winter coat which goes nearly to the ground.

I use the bus a lot in Brighton (it’s free for pensioners in the UK) and there were a couple of days when I really needed that top-to-toe cover! It was bought in a charity shop some two years ago, and I’ll try at some point to get a street shot as the long length flows out behind me as I walk along. Actually in freezing weather I find that this coat isn’t as warm as it looks, because the flowing look is helped by a deep split at the back, which is why I got out my vintage faux fur coat in that very cold snap we had a couple of months back.

Here’s the hat with a lighter and shorter Spring trench coat, bought in a charity shop last year.  But tbh, I haven’t worn the trench yet it’s been so chilly.

But the weather is supposed to get warmer over this weekend. So I won’t need the black coat or even this hat.

Note that my hair is still growing out the dye. I stopped colouring it in October 2016, so it is a long process. If I remember correctly I began because my face had gone pink after dyeing my eyebrows (I have to say I do regret not dyeing the eyebrows) so I said to my hairdresser, let’s leave the dye for a couple of months. After that I realised that actually the white at the front look good and from thereon I became a believer – in going au naturel.  It feels good and right, for me, that is, so listen up, never listen to anyone advising you to go grey. Because you will know when.

I used to have arguments on the blogosphere about exactly this!  At one time I even argued with Alyson Walsh of That’s Not My Age, but both of us seem be at the two-thirds stage now.

Yes, now it’s two thirds grey with a white streak at the front, but the ends are still blonde, which I’m not cutting off as I’m growing my hair. If I ever catch myself looking lank and unkempt I’ll definitely go shorter, but at the moment I’m aiming for a wild and witchy look!  Well, why not, I’m always up for a change of look!

But what a lot of money I’ve saved not going to my hairdresser every six weeks for a colour. Also these days I use fewer products and hardly ever use my hair dryer as I let my hair air dry. I haven’t started using any grey/white hair specific products (see Alyson Walsh’s blog about that) but what I do use is lashings of serum once it’s dry. After a day or two it goes very sleek, and I don’t wash it much more than every 6-7 days. Yes, I leave it that long. 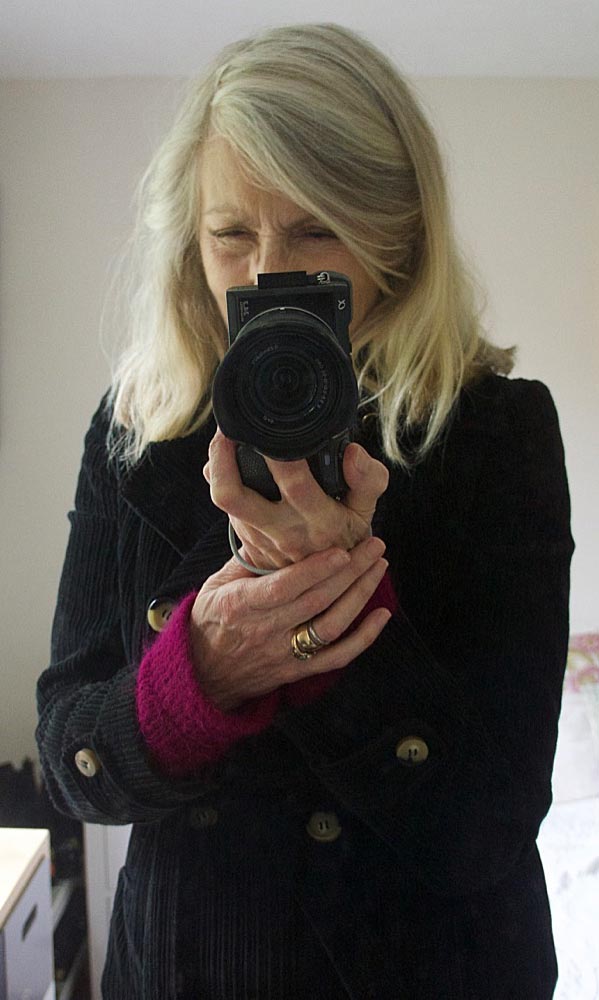 It looks a bit unkempt in the pic above but it just needs a brush and blob of serum! And I like that colouring – it’s naturally streaky, who knew!  Well I didn’t until I let go the dye.

With love, Penny,  the Frugalfashionshopper