Wow, it was hot on Saturday. Over several days we’ve finally had quite warm (for the UK) temperatures. So I got out my summer dresses and actually wore them. And believe me, it has to be warm for me to bare my arms and go around without a cardi!  There are two dresses and a skirt that I’ve favoured over others.

This is a pic taken some weeks ago but it does show how the (charity shop) skirt keeps one cool in the heat of the summer sun. 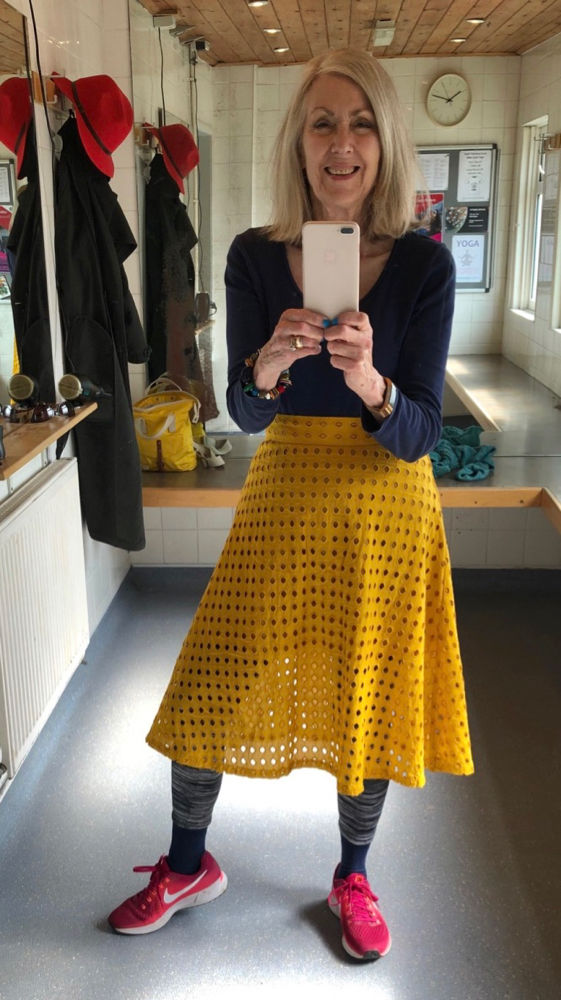 Then I’ve also worn this lovely green dress bought new two years ago. And that’s me two years ago as well. Note the one third white and two thirds dyed hair.

I stopped dyeing the hair in October of 2016 and it took a long time to get that length all white and grey but I did it.  And now I ask myself why oh why did I dye for so long?  I’ll do an update on the products I use in another post.

But here is my latest buy.  Now I had said to myself that for several weeks I was not to buy a thing after my rather expensive foray to that lovely shop at Emmaus, which I don’t regret at all as it will become an heirloom to be passed on 🙂  However, this just couldn’t not be bought!!! I spotted it in a charity shop and pounced.

It’s such a lovely happy dress!

Worn with the red (charity shop) sun hat and red sandals bought several years ago this dress just shouts ‘go to the beach’ which is what I’m going to do next week when we take a short break to Woodbridge, a town on the East coast of England. I have to say that some of its attraction is that this coast always has a cool to cold offshore breeze. And that’s what I totally love!

I know, I know, there are so many places that we ought to go to.  I have a long list of cities in Europe that need to be visited but because my parents lived in Suffolk and we visited that area so many times we feel at ease and relaxed revisiting old haunts. I shall do lots of reading and just chill.

Do you have a favourite place to escape to?

That’s all for now, with love, Penny, the Frugalfashionshopper

P.S. Last week in Sainsbury’s supermarket amongst the veg I bought were two items wrapped in plastic. After I paid for them I unwrapped them and left the plastic behind on the counter.  I was absolutely polite and smiling, but said to the assistant I’m not accepting this.  Her response also was polite. That’s fine, she said and took it away. Now I don’t know how they’ll recycle the two bits of plastic, but if everyone did this……