For those of you who are new to the blog every month I feature the outfit I wear on film night.  I help to run a great little film society in our local community centre, which is now in its 4th season and has turned out to be quite a success.

I usually wear my latest bargain buy, but not this time.   All that clearing out of my wardrobe revealed a couple of items that were just right there but kind of not seen.  Also it was our AGM.  I felt I had to look a bit competent and professional rather than the fun, frilly look that I usually like to project. 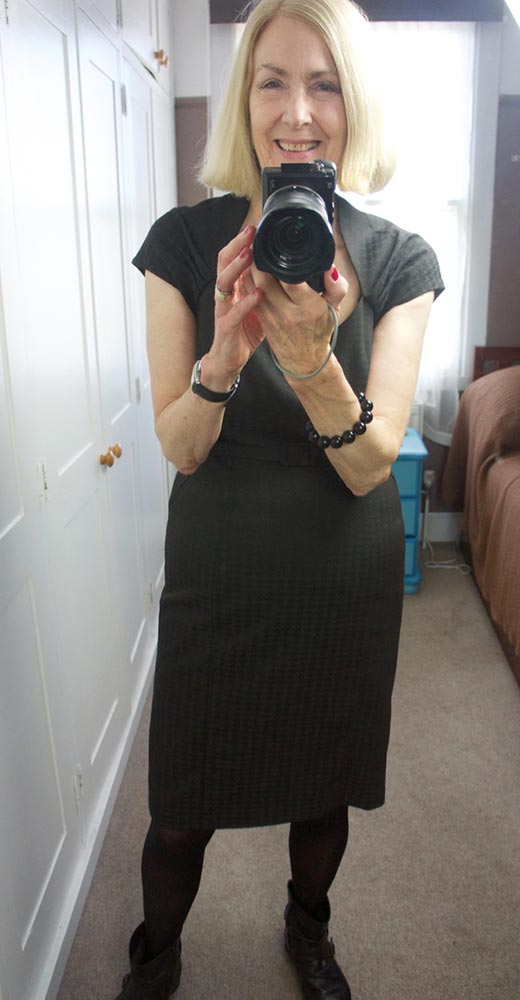 It’s a Jasper Conran dress bought new about 6 or 7 years ago that I’ve hardly worn, in fact the last time was at film night, in the first season!  Can’t have been that pricy, as although Conran is a designer label it was bought at Debenhams, which is quite a reasonably priced place to find clothes (which I did when I was working, that is, not now with my small pension).

Despite the dress not being a charity shop buy, I think it’s worth putting up because I do want to get over that weeding out the wardrobe really does have dividends, in that you not only make space and free yourself up – you can find items and say – wow, yes, let’s wear this!

And btw, the little winter boots are still being worn (with my black tights, more about that in the next blog post).  They must be into their 5th winter, and are so old, but I love them!