Last Saturday we showed Brooklyn – what a lovely, nostalgic almost elegiac film.  Mark Kermode called it a fairytale of New York and you couldn’t have had a more exquisite actor in Saoirse Ronan who is the sweet centre of this story of love, longing and identity.  The colours and cinematography were just divine but, oh my, the 50s clothes of the characters were a sight to behold, with the men in their blazers and slicked-back hair and the young women in their pastel-coloured full skirts.  Have you seen Brooklyn?  I tell you when I was a teenager I definitely had a swimming costume in that exact same style and colour, but unfortunately those were my acne years, so in no way did I look anything like the lovely Saoirse Ronan!

On the night I wore an old favourite.

This skirt was bought some 5 years ago with a vintage jacket, which I’ve since got rid of, as I don’t think vintage is all that good a look on me. But the skirt I simply love. 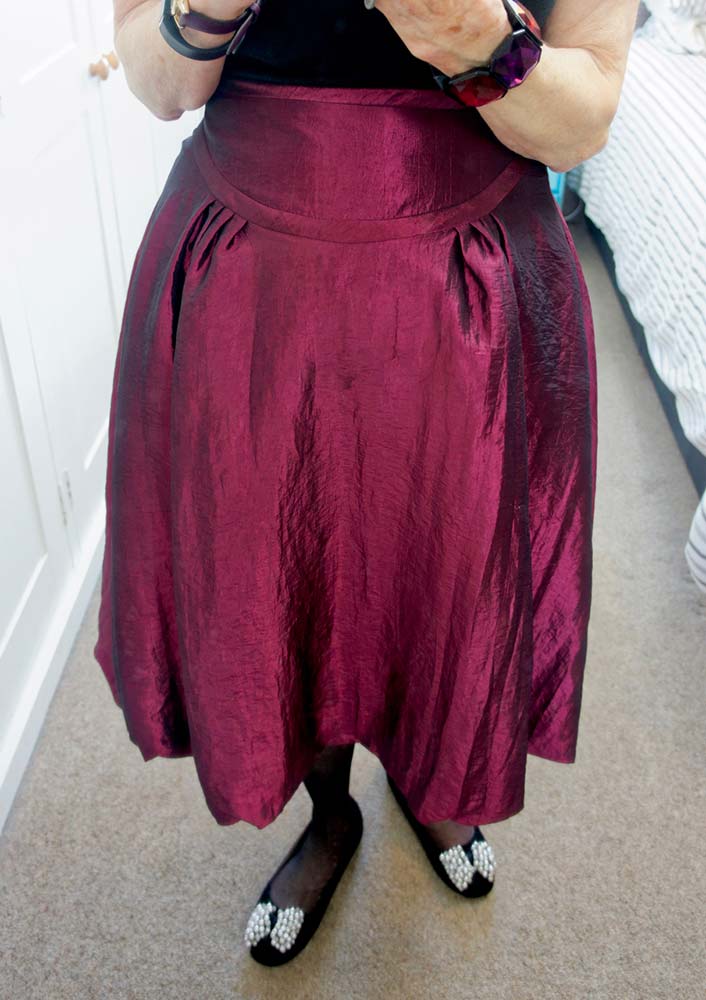 It was bought for £5 and looks and feels sumptuously gorgeous with its full skirt, its satiny feel and deep colour.  It looks expensive but its label is Florence & Fred (otherwise known as Tesco) which is a cheap and cheerful supermarket chain.  It was an amazing charity shop find, but really, with that label, it can’t have been all that expensive in the first place.

Anyway, I tried a couple of jackets.

This one is a what you might call a ‘waterfall’ jacket being longer at the front than the back. I put it on and went, ‘oh no, no way!’   This is because it was just so unflattering and a perfect example of how a loose, baggy jacket can be fattening.  I bought it in a sale 5 years ago and haven’t worn it all that much – so after taking this photograph it’s gone straight into the charity shop bag.

I then tried on another old favourite – my slightly biker, faux leather jacket with those old boots of mine.

As you can see from the first 3 pics I do possess shoes other than these boots (!) but I decided that with all the running around I have to do, I really ought to wear my comfortable boots.

Despite it being a cold, wet night I also decided that my biker jacket was going to be too hot, so I spotted my thin linen jacket, took it out and, hey presto, this was the best outfit for the night. 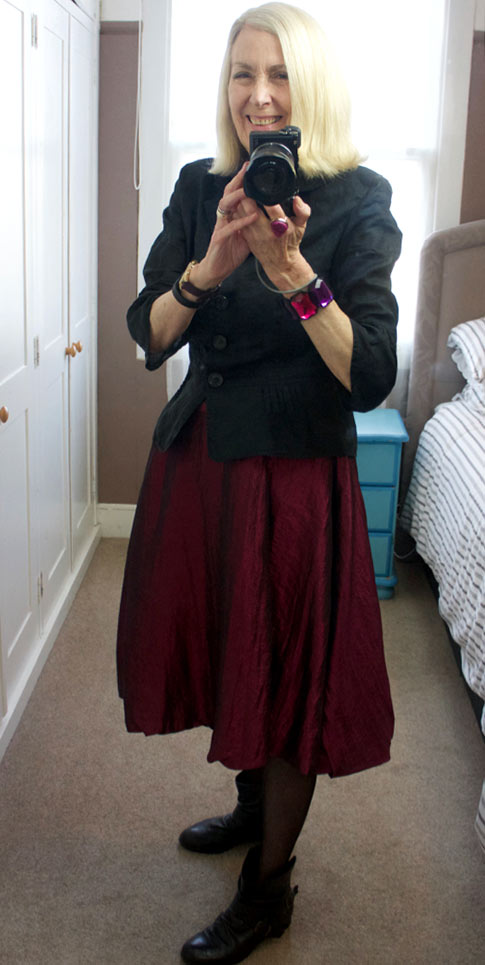 The cut of the jacket is the key to the outfit as it accentuates the waist.  Just like everyone else, and despite my slim build, I have rolls of fat around my middle and for me, certainly, a nipped in waist disguises them.  I’m going to say it again – too much material bulks you up, less is better.

Film of the year – I’m also going to tell you about my film of the year.  I saw Arrival last week and have been raving about it ever since.  However, having emphasised its virtues I’ve noticed that as I explain just a little of the plot, some people take a backward step, make a face and say something like, ‘oh no, that wouldn’t be for me, or ‘I don’t like that kind of film’.  Because Arrival is a science fiction film.  I won’t go into a blow-by-blow account of the plot, but suffice to say it’s a cerebral film focusing on time, memory and language with a great central role for Amy Adams.  It’s also ultimately up-lifting and possibly a film for today – something you’ll realise after you’ve seen it  And, btw, it’s nothing like the Marvel superhero fluff out there. Why not see it and tell me what you think!  Or, while I really want you to see it, instead, tell me what is your film of the year?

P.S. Sharing with Catherine Summers and her weekly #iwillwearwhatilike session.