Wow, nearly the end of the month and I still haven’t shown you what I wore on film night. We screened the documentary, Muscle Shoals, which, without really trying anything (apart from a short burst of promotion on Facebook) was incredibly popular – 80 people came and, from our feedback forms we can see, thoroughly enjoyed it.

Have you heard of the doc or the name, Muscle Shoals?  Not many had.  First, Muscle Shoals is a place, a very small town in Alabama, USA.  And second, out of that small, quite poor town came just about every bit of soul, blues and popular music from the late 60s, 70s & 80s and beyond.  Up to the present day there are two studios still churning out hits – the whole thing was an absolute revelation and a must-see for any music lovers.

It was the second time I’d seen it and I’d forgotten the link with our previous film Selma because much of the music produced in the early days of the studios was in the time when the colour of your skin really mattered. However, while the guy who owned the studio, and the backing band that gave that particular Muscle Shoals sound, were white they worked with anyone of any colour, because, as they said, it was the music that mattered.

If only the whole media business was like Muscle Shoals.  I agree with the current furore over the lack of Oscar nominations for people of colour.  For instance, where’s Samuel L Jackson’s nomination for The Hateful 8?  And where’s Idris Elba with his role in Beast of No Nation?  While the latter maybe not in the running as it’s a Netflix pic, even so read this paragraph with an upward exasperated inflection.  Worst was last year’s omission of David Oleweyo as star of Selma.  That was so bad as his acting in that film is sublime, and the whole film is so good. Oscar voters, who ever you are – pull  your socks up, particularly as I see Idris has just won two awards from the Screen Actors Guild – yay.

Anyway, what raised a laugh on film night was that in Muscle Shoals the studio guys usually got looks when they ate with the men and women who were black, but they absolutely could not eat with the bands that came along in the 70s who had long hair – that was not, remotely, in any way, possible.

But before you say how quaint, or that attitude (to the hair) must have been because it was the deep south.  The perception of what is the right way to look is so varied.  I lived in Switzerland for 2 years (working as a nurse) in the 70s, and boy, were they behind the times, or that’s the way I saw it.  Because being a Brit and fresh out of the swinging 60s and louche early 70s I brought with me my precious hand-stitched and patched loons – voluminous does not describe the magnificence of the lower end of those jeans.  But the first time I wore them in the neat streets of Neuchatel, people turned and pointed at me, some covered their mouths – were they laughing!   Reader, they were.  Nevertheless I continued wearing them, particularly when a fellow (Swiss) nurse took me aside and asked, was I not ashamed to wear something with a patch – can you not afford a new pair of jeans?   When I said that patched jeans  were fashionable in the UK, her reply was that, frankly, she didn’t believe me – why would people wear such a thing!  That, I can tell you, made me even more determined to wear them at every possible occasion, which I did!

So, there’s nought so strange as folk and their perception as to what is the right and proper way to look.  But I’ve obviously had that ‘let’s wear something that people think you shouldn’t’ gene for some time!!

Anyway, here’s what I wore on Muscle Shoals night. 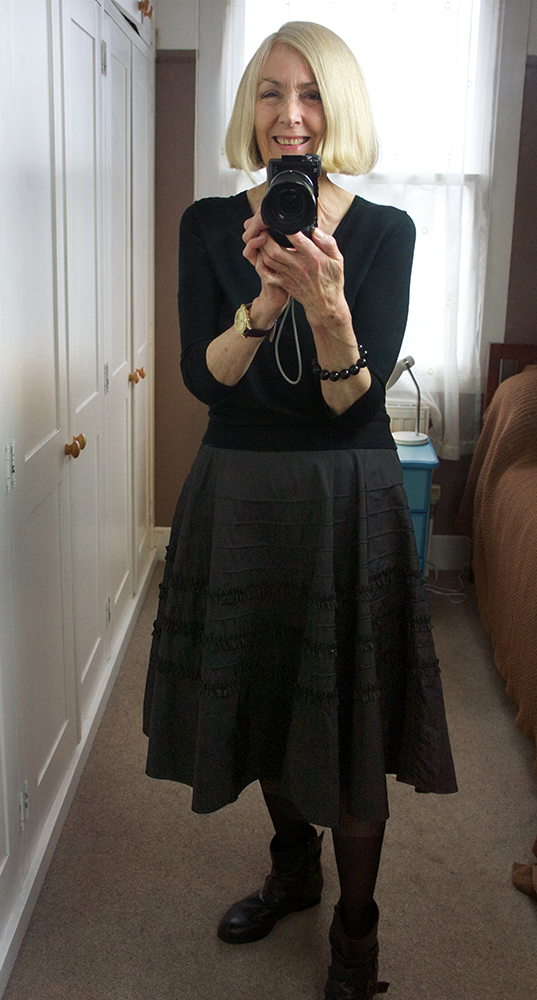 It’s a full-skirted Monsoon skirt bought for £5.99 worn with a plain top that I’ve had for years. 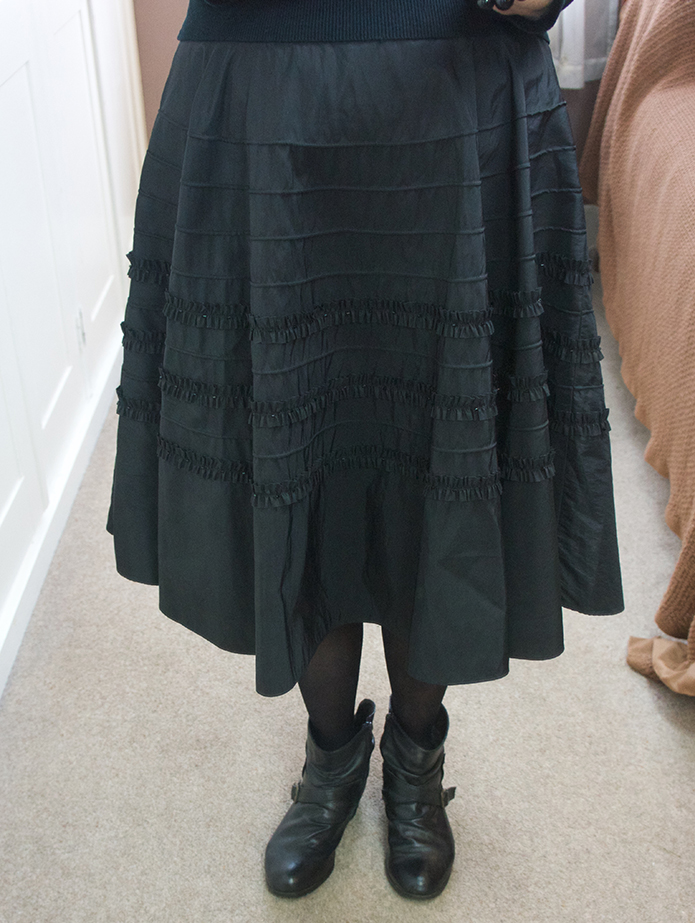 Those little boots go on for ever!

That’s all for now – but do tell me if you wore ‘loons’.  Did you add material like I did?